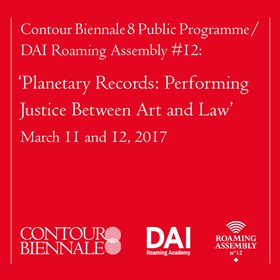 As a system of rules constructed and enforced through institutions to regulate behaviour, negotiating legacy relations between particularity and general application, while being maintained through textual and oral interpretation, law is a space of great – if denied – aesthetic deliberation. Justice, quite differently, might be figured as an intractable entanglement of relations, intentions, affectabilities and adjustments between ever-moving, never-global, densely articulated bodies.

The law's modernization in the colonial epoch consolidated limits for possible relations between justice and law, in its ontological set-up of male persons with base units and rights of property in contractual relation. Engendered and ethnocidally arranged through this fractal abstraction, juridical modernism foreclosed the order of land-based life and literacies. Its decrees of 'right' expansion continue to be built upon and innovated, while it secures and distinguishes only particular subjects, objects, and things, into investment-worthy relations.

When artists engage procedures of witnessing, testimonial production and the performativity of the trial, allegories of justice and modes of theatricality surface to haunt the past and present. These spectral zones must constantly be inspected and contested, just as ghosts must be evoked in order to deal with their unfinished legacy. Film and performance are vehicles among many that carve out alter-civilizational images and conceive legibility for eroding matters of injustice. Working from Mechelen, this co-curated programme invites artists, theorists and filmmakers to explicitly unpack the technicity and asymmetrical power of European legal infrastructure. Over two days the program examines artists' role in challenging normative legal foundations while transforming our understanding of response-ability to double-meanings of law/lore, and tracing the inevitably formal dimensions of present day struggles.

How do ongoing planetary rebellions determined through existing value forms and categorizations, including the racial categorization of 'no body/no thing' aim at legal rupture when placed before the courts, without falling into mimetic disfigurements within this very same insufficient order? What does it mean to take an eye or ear to scenes of struggle that reverberate well beyond as well as inside legal institutional terrains? How can artists' own literacy in post-media conditions – very much at play inside the contemporary law court – make sense of possible realisms against and beyond juridical modernism's reproduction of capitalism and its increasingly death-driven function?

The artists of Contour Biennale 8, Polyphonic Worlds: Justice as Medium, are connected through their attention to aesthetic contestations of the juridical beyond its present coding, their productive dealings with a planetary regime of impermissible evidence, and their ritualistic as well as counter-analytical engagements with an expanding, expropriated archive. The 'record' here is often not data that can be positively marked up or collected in advance, but instead, what is lived while being judged to be outside of proper adjudication. To cultivate flexible imagination around these juridical-aesthetic impasses is to work through the persistent constraining of just realisms, where survival is constantly at stake. Here, justice itself becomes the medium through which we cannot avoid moving through, within and around.

Special thanks to e-flux conversations: http://conversations.e-flux.com/t/live-coverage-planetary-records-performing-justice-between-art-and-law-at-contour-biennial-8/6249

Natasha Ginwala is a curator, researcher, and writer. She is curator of Contour Biennale 8 and curatorial advisor for documenta 14 (2017). Recent projects include My East is Your West featuring Shilpa Gupta and Rashid Rana at the 56th Venice Biennale; Still Against the Sky at KW Institute for Contemporary Art, Berlin; and Corruption...Everybody Knows with e-flux, New York, within the framework of the SUPERCOMMUNITY project. Ginwala was a member of the artistic team for the 8th Berlin Biennale for Contemporary Art (with Juan A. Gaitán) and curated The Museum of Rhythm at Taipei Biennial 2012 (with Anselm Franke) and at Muzeum Sztuki (with Daniel Muzyczuk). Ginwala writes on contemporary art and visual culture in various periodicals and has contributed to numerous publications.

Rachel O'Reilly is a poet, artist, curator and researcher. She was a curator at the Gallery of Modern Art | Australian Cinematheque, and a member of the curatorial and archival team of the Fifth Asia Pacific Triennial. Exhibitions include The Leisure Class (with Kathryn Weir) GoMA, Brisbane; and Videoground, Gene Siskel Film Studies Centre, Chicago, MAAP, Brisbane. At the Jan van Eyck Academie she developed 'The Gas Imaginary', an artistic research project on unconventional extraction, recently presented at David Roberts Art Foundation, London; Qalandiya International, Palestine; Tate Liverpool; and UC San Diego. She is co-editing Feminist Takes on Black Wave Film with Antonia Majaca and Jelena Vesić upcoming with Sternberg, and teaches the seminar 'At the Limits of the Writerly' for the 'How to Do Things with Theory' program at DAI.

Dutch Art Institute's Roaming Assembly is a recurring public symposium scheduled to take place once a month, functioning as it were as the DAI-week's 'centerfold' event. This state-of-the-art speculative and hybrid program explores specific themes and topics of contemporary relevance to the thinking of art in the world today. It is considered a key part of the DAI's (version of the) 'Planetary Campus' – an affective community where caring for the earth goes along with the generous sharing of art and research, where complexity can be embraced and intellectual intra-actions are fostered, aiming to endow our praxes, wherever they are operational. Although closely interlinked with the DAI's academic program, Roaming Assembly editions are not conceived as plain extensions of the regular DAI classes and seminars, but rather envisioned as sovereign happenings, designed to mobilize our bodies, our intelligences.

Council presents The Against Nature Journal

Notes Toward a Theory of Transformative Justice