The Enemy Inside Me at Istanbul Modern is the first ever retrospective in Turkey of the internationally acclaimed artist Kutluğ Ataman, an artist who has shown his work perhaps more extensively abroad than in his home country. Born in Istanbul in 1961, Ataman studied cinema at the Sorbonne, and went on to receive his MFA in cinematography at UCLA. He was already considered an avant-garde filmmaker in Turkey and internationally, having received prestigious awards such as The Turkish Film Critics Association's Best Director and Best Film and Best Screenplay Awards with his first feature-length film Serpent's Tale (1994). However, he made his debut in the contemporary art world when he participated in the 5th International Istanbul Biennial in 1997 with kutluğ ataman's semiha b. unplugged (1997) upon the invitation of Spanish curator Rosa Martinez. When shown during the biennial, the eight hour long kutlug ataman's semiha b. unplugged signalled themes that would characterize his artistic practice in the following years. In semiha b., Semiha Berksoy, the 87-year-old Turkish opera diva, performs and re-enacts her life as well as giving an extended account of the Turkish Republic in her bedroom, her monologue recorded by a hand-held camera. The work becomes a portrait of semiha b. painted by the protagonist while Ataman lays bare the mechanisms of self-mythologizing. Ataman's interest in identity politics and his particular way of seeing marginalized peoples, the constructed and the mute as an extension of himself is evident; by producing a pattern of portraying individuals and communities while simultaneously creating a continuous, extended and ever-changing self-portrait.

Ataman's debut retrospective in Turkey, The Enemy Inside Me, presents a selection of works from the first half of the past decade. Upon entry into the gallery one descends the permanently-installed Stairway to Hell (2003) by Monica Bonvicini, and then greeted, interestingly, by Ataman's Paradise (2006), a multi-screen installation that presents a series of talking heads from Orange-County USA, including an aspiring teenage actress, a plastic surgeon and a male porn star who tell their tales, all the while competing for the viewer's attention. On the other side of the space is a circular installation of synchronized monitors on the floor, each slightly differing in terms of their colour adjustment. They present It's a Vicious Circle (2002), where a Jamaican immigrant living in Berlin complains about the racism he has been experiencing while involuntarily illustrating his own biases. These two constellations, one a perfect circle and the other as two adjacent semi-circles, immediately pull the viewer into their protagonists' subjectivities, setting the stage for a series of personal dramaturgies that twirl around their own axes.

The Enemy Inside Me truly begins when one walks into the main exhibition space and is confronted by the life-size Kutluğ Ataman in complete darkness, performing as a belly-dancer in Turkish Delight (2007). Here, Ataman, always behind the camera and presumably absent in his pseudo-documentary style, is in front of the camera, visible, in glittery high-heels, swinging a long black wig. Literally and figuratively, the artist is going through the motions, putting on a show, meeting the gaze and assuming his 'oriental' identity. 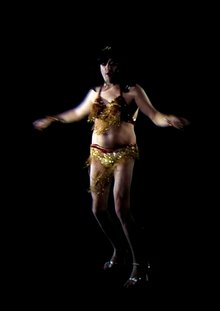 Directly behind the wall on which Ataman is 'performing' are four women in wigs, in a piece entitled Women Who Wear Wigs (1998). The four-channel installation cites the narratives of four different women; a political activist in hiding, a transexual, a university student with a head-scarf (who is never visible) and a cancer patient who has lost her hair. They all use wigs to veil their real identities for reasons related to the social stigmas and political tensions in Turkey. While the wig acts as a very simple tool of re-creating a new identity, the stories of these four distinct women illustrate how a society plays an active role in engineering physical as well as psychological characteristics.

Another standout work, Never My Soul (2001)is presented in parts on small monitors scattered around what resembles the living room of the main protagonist Ceyhan, a transsexual who simultaneously 'lives' in old Turkish movies and a dialysis centre in Lausanne, straddling the realms of reality and fiction. Similar to Women Who Wear Wigs this work highlights the numerous characters that can exist within an individual, unfolding in front of a camera.

Ataman is not only interested in the intense content of his works, the depths of his subjects' characters and how they mirror parts of himself, but also in the physicality of his installations. In The 4 Seasons of Veronica Read (2002) and Stefan's Room (2004), two parallel works that focus on the obsessive absorption of two personalities, Veronica and Stefan, the multi-screen installations function as the four walls of a cave. 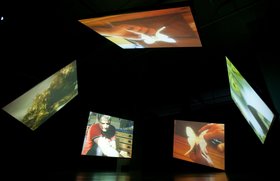 Produced by The Institute for the Readjustment of Clocks, Istanbul
Courtesy of the artist and Thomas Dane Gallery, London

Veronica's only passion is hippeastrum flower bulbs, while Stefan raises and preserves moths and butterflies. In both installations, the screens create cocoons, suggesting the claustrophobic worlds of their subjects. Another video that functions as a phenomenological experience is 99 Names (2002), a five-screen projection where the screens follow a crooked gradual ascension. The first screen almost rests on the floor, and each screen is elevated a little higher than the one before, with the fifth screen almost touching the ceiling. The same seated figure, rocking back and forth is projected onto these screens, and like the screens, he ascends from calm contemplative immersion into religious ecstacy, shouting and beating his chest, working himself up to an out-of-body experience. These three works function not only visually and psychologically but also physically, mirroring and accentuating the mental states of their subjects.

The constant hum of voices one gets accustomed to while walking around The Enemy Inside Me is a clear indicator of how many different stories, characters, personae are sharing, over-sharing, manipulating, mythologizing and constantly constructing. Ataman works within the fissures and selects individual voices and states of mind from that continuous buzz. The Enemy Inside Me presents just a few; a more comprehensive and all-encompassing survey of the artist's works is yet to be presented in Turkey.

Duygu Demir is a writer and works in Research and Programmes at SALT in Istanbul.

Notes on a Giant Implosion

We Are Sick, But We Are Alive