Walking in the Darkness of a Promised Light

In Regarding the Pain of Others, acclaimed writer Susan Sontag's 2003 meditation on how we interact with photographs of violence and suffering, she asserts that, 'the appetite for pictures showing bodies in pain is as keen, almost, as the desire for ones that show bodies naked'. For Sontag these twin desires intersect most vividly in the rich iconography of suffering seen in Christian art, from images of scenes from Christ's passion to those commemorating the often gruesome deaths of saints. Recently on view at Dubai's Gallery Isabelle van den Eynde, Reza Aramesh's new photographs and sculptures draw specifically on this rich iconography, tapping into the powerful hold that images of bodies uncovered and in pain have on us, to further his investigations into the particular body language of violence and suffering. 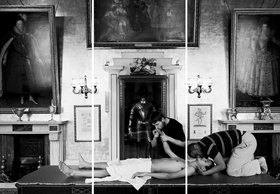 Since 2008 Aramesh has used media images of conflict from around the globe as sources for his numbered 'actions', re-enactments of scenes extracted from such images and staged, somewhat anachronistically, in slick modern apartments, stately British mansions, and art-filled museums. Documented as black and white photographs, these surreal transpositions serve as cruel reminders that such accumulated wealth is usually the result of war, conflict and oppression elsewhere, both historically and in our contemporary moment. Aramesh prefers using amateurs in these 'actions', which feature a changing all-male cast drawn from Britain's immigrant communities, who appear dressed in their everyday street wear; additionally, no weapons or other instruments of violence or torture are included in the re-enactments. Lacking such specific references, the 'actions' distill episodes of violence and conflict into studied tableau, each a particular configuration of poses, gestures and expressions. Events unfold as compositions and experience is recounted through physical and spatial relationships between individual figures or discreet groups. And while each 'action' bears a long subtitle – often the news caption that accompanied the source photograph – this neutral, factual description reveals little, and leaves one unable to fully locate Aramesh's image in a specific time and place.

Aramesh's new work seems to forgo the moments of intense and intimate confrontation that appeared in his earlier series Between the eye and the object falls a shadow (2008-09), focusing instead on scenes of men captured and detained. The figure of the oppressor is removed entirely and the camera maintains a deliberate distance. With fewer figures and less interaction between them, this work is quieter and more composed, in both senses of the word; these photographs have the air of Old Masters. Much of the energy, chaos and drama expected of an image of conflict is evacuated leaving just a palpable pathos. The photographs are, instead, figural studies in abjection, of the male body forced into submission. Many of the young men appear shirtless and while the unabashed display of their well-built torsos introduces a possible homoerotic subtext, the combination of submission and coerced nakedness also evokes the humiliation of daily strip searches endured by Palestinian men at checkpoints and the types of torture enacted at Abu Ghraib, where forced nakedness was consciously applied to degrade inmates. 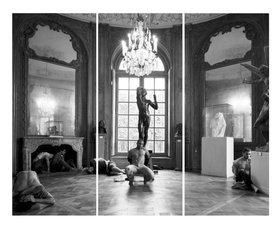 Previously presented as single frame shots, Aramesh divides these images into diptychs and triptychs mimicking the multipartite structures typical of Christian altarpieces. With a smaller human cast, Aramesh relies on the architecture and objects within it – paintings, sculptures, chandeliers, mirrors – to organize the compositions, introducing subtle visual puns. In Action 97: Algerian civilians suspected of being terrorists are searched and put on trucks to be taken to the interrogation cells, Algiers 1956 (2010), a central window, flanked by two similarly sized mirrors, structures the triptych. Framed by the window, our eye is immediately drawn to the taut, twisting body of a black Rodin sculpture in the centre, and to the bare-chested young man, squatting at its base, arms tethered behind his back. Due to his proximity to the visceral statue, the man's torso registers not only as bound but also a study in strength, tension and torsion. Such attention to symmetry and beauty, to the aesthetic impact of the image, seems to protect against the apathy that overexposure to images of war seems to breed, plucking such images from the glut of the 24-hour media cycle and carving out a quiet, contemplative space around them. 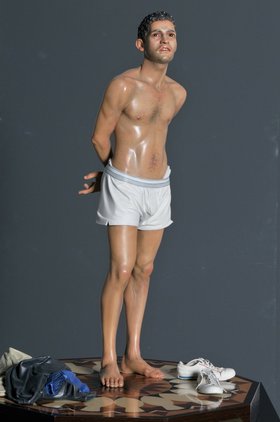 Five single figure sculptures in polychrome limewood complement the photographs. Perched atop polygonal plinths, their patterned marquetry referencing both the geometry of Islamic art and the floors of the palatial interiors where the 'actions' are staged, each shows a half-naked man in a submissive stance: some kneel, hands behind their backs or heads, one sits on the ground, knees drawn slightly up and apart, hands grasping his head in despair. In Action 105: An Israeli soldier points his gun at a Palestinian youth asked to strip down as he stands at a military checkpoint along the 'separation barrier' at the entrance of Bethlehem, March 2006 (2011), the man, stripped down to white boxer briefs, clothes and shoes lying at his feet, stands with hands pulled behind his back, staring wistfully off into the distance. His pose is that of Ecce Homo, Christ displayed to the Jews prior to crucifixion, and of the arrow-pierced St Sebastian; his bunched up briefs are a modern day loincloth. Isolated, each of these figures shed all vestiges of their specific histories; they become generalized images of human suffering. Equipped with glass eyes, they all have disconcertingly hollow gazes. Looking up, down, away or through the viewer, none allow eye contact, as if declaring that their humiliation lies beyond our empathy and understanding and, as such, is deeply private but also sacred, outside the limits of human comprehension.

Inspired by an exhibition of religious sculpture from seventeenth-century Spain entitled The Sacred Made Real that Aramesh saw at London's National Gallery, his sculptures seek to (and accomplish) the reverse, imbuing documentary images of men forced to submit and suffer with the dignified aura of the sacred. Transfiguring experiences of humiliation into exquisite embodiments of heroic self-sacrifice, they are modest monuments to the human capacity to endure. Given the recent tumult across North Africa and the Middle East, the sculptures almost function like impassioned calls to action, tributes to the Tunisian street vendor Mohamed Bouazizi, whose self-immolation, a desperate act of protest against decades of tyranny and injustice, ignited the Arab Spring and empowered multitudes across the region.

Murtaza Vali is an independent writer, art historian and curator living between Sharjah and Brooklyn.