The three decades preceding the year 2000 brought about significant economic, political and technological changes for the majority of Gulf countries. These changes influenced the way urban areas are structured and function in Gulf cities. According to the United Nations Population Division, between the years 1970 and 2000, the majority of the GCC populations lived in urban areas, with the exception of Yemen.[1] This growth affected the form and morphology of urban-landscape and changed the environment in which people live and work.

This urban growth took place concurrently with the spread of globalization in the region. Since the beginning of the early 1990s, globalization paved the way for a new era in the Middle East and the Arab Gulf. This era was received with mixed attitudes and a lot of cynicism towards the global project. In the Arab mind, globalization holds contested meanings and is often rejected for its associations as a western project and a one-way cultural invasion.

Today, cities in the Gulf deliver conflicting effects of the complex relationship between cultural production and global forces. The case of Dubai is perhaps the most intriguing. What are the promises of globalization? How does it shape the urban environment? And what are the effects of globalizing tactics on the future of gulf cities like Dubai?

Globalization is perceived as a challenge and an opportunity at the same time. The city of Dubai for example, is imagined as a city that aspires to compete in a global market and cultivate symbolic economies: making use of signature architectural projects, hyper-networks for transportation and commissioning enormous shopping and entertainment attractions to promote its image. However, when the global financial crisis hit town, the undesirable side of the global vision became evident. During the great global recession, building construction declined. Between 2008 and 2012, the effects continued to be apparent both in the pace of development and the constructed imagination of the city.

Architecture is entangled in global forces. Global networks and real estate developments engage architecture in a post-industrial condition that results from globalization, mobile capital, and digital media.[2] Iconic buildings, for example, are integrated within the tactics of globalization and can bring a new level of international visibility.

One of the strategies to ensure higher visibility worldwide is to create skyscrapers that can break a global record and leave an international impact. Burj Khalifa is an example of design intended to create a global signifier: an icon that can reflect, as Donald McNeil argues, 'the growing glory of Gulf economic strength.'[3] With such a project, Dubai was turned into a 'new global icon of imagined urbanism.' It is 'the latest manifestation of technological sublime, its complacent mastery over nature reflected in a culture of great luxury.'[4] The transmission of the image of the highest skyscraper on the planet in various media turns material form into informational content and blurs the boundaries between the global and the local. 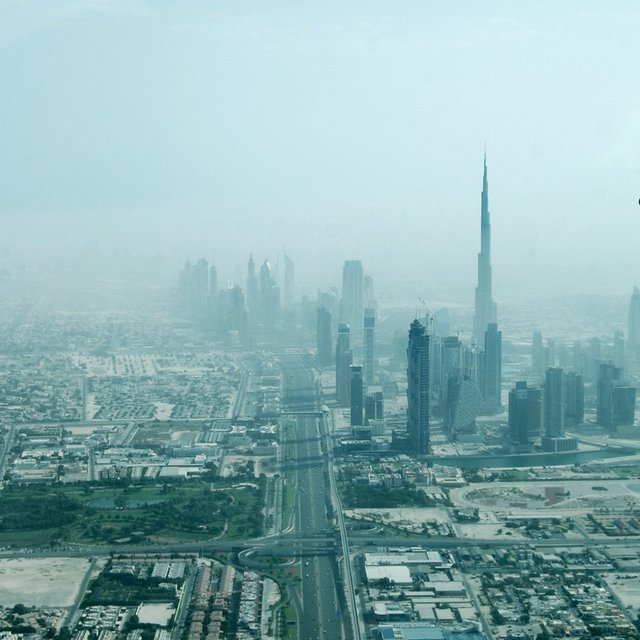 Burj Al Arab is the second relevant example; considered both as a local emblem and global signigier, the building has gained a rare symbolic meaning of luxury and style. Today, two iconic buildings – Burj Al Arab and the Burj Khalifa – are both intertwined with the global and international imagination of Dubai. They have become almost inseparable from the image of Dubai. In this respect, it is fundamental to understand architecture not only as a cultural production but also as 'economically valuable knowledge', since 'Dubai uses its architectural emblems as means of advertising its corporate success.'[5] 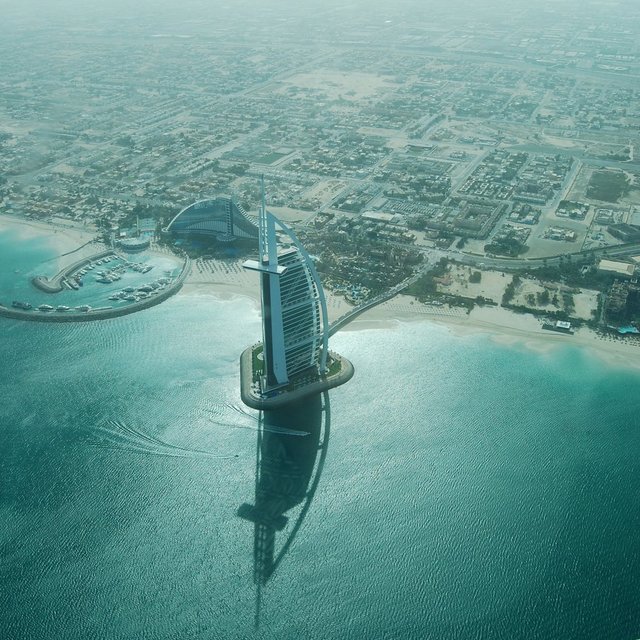 The Upper Marina District is another case of this condition where visibility is produced through global meaning. It represents the links between urban developments and globalizing tactics – from planning to inception as well as the processes of production and consumption. Home to 20 supertall towers transplanted on the desert sand, this densely packed block of high-rise residential towers is a natural response to a growing local and global market. Among the towers, The Torch by Khatib & Alami (K&A) was the world's tallest residential tower in 2011, reaching 345 metres high, with 90 percent of its space devoted to apartments. Next to it stands the Pentominium, at a height of 516 metres and designed by Adam Bromberg of Aedas, set to become the world's tallest residential building upon its completion in 2014. The Infinity Tower (432 metres) by SOM, Marina 101, World One and Princess Tower are amongst the other structures that are also under construction. 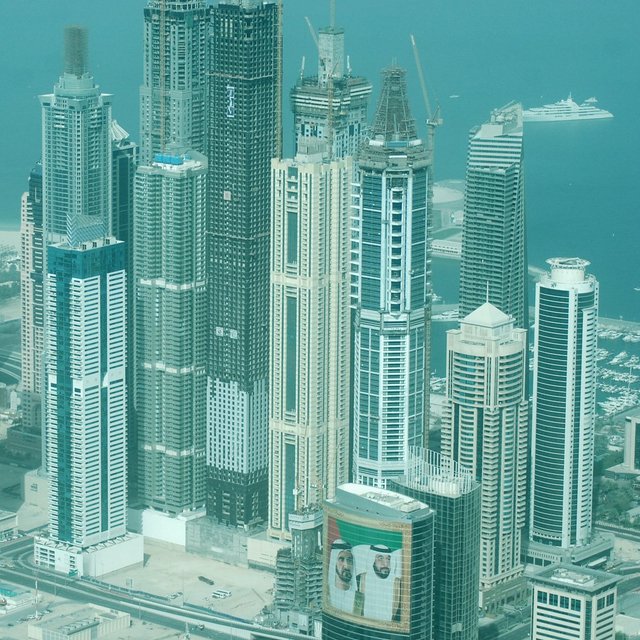 The above image illustrates Upper Marina District with its high-rise towers. The density and proximity of the towers support the image of economic growth and provides a dominant and continuous visual scene – a scene of modernity and progress. This picture was taken two years ago, in April 2011. It illustrates the moment of stagnation, which characterized Dubai's urban development at that time; the global financial crisis in 2008 triggered a sharp downturn of a number of projects and a construction slowdown.[6] Between 2008 and 2012, a perceived decelerated process of construction, and the effects of the financial crisis and recession, were immediately felt through the delay of various projects. This situation provided another instance of the dependence of the construction industry on global networks.

None of those towers seems to presume a relationship to the local context. The towers barely hold any reference to the specificity of the place. They could be anywhere. The block stands independent from its context and defies any attempt of localization or specificity – except for the portraits suspended on the one of the towers and perhaps the yacht in the background. This is a global district par-excellence. Even the inhabitants are global nomads. The majority of the clients are expats who probably prefer to live a modern life in dense urban neighbourhoods. Moreover, the tallest, hence most visible, of these towers were developed by international global practices and multinational firms; SOM, Aedas and K&A all produce projects worldwide.

With the limited restrictions and building regulations, almost any design is allowed. These postmodern skyscrapers adapt various aesthetics. And any deliberate attempt to create unique individual forms is aimed at increasing chances of visilbity. By competing to the sky, each tower also tries to break a record through technical innovation or by being the tallest residential tower. Yet within such urban landscape, the structures still look alike. Their multi-storey podium blocks, exposed slabs, punctured facades and bare skins provide a typical visual environment that is familiar to Dubai residents. 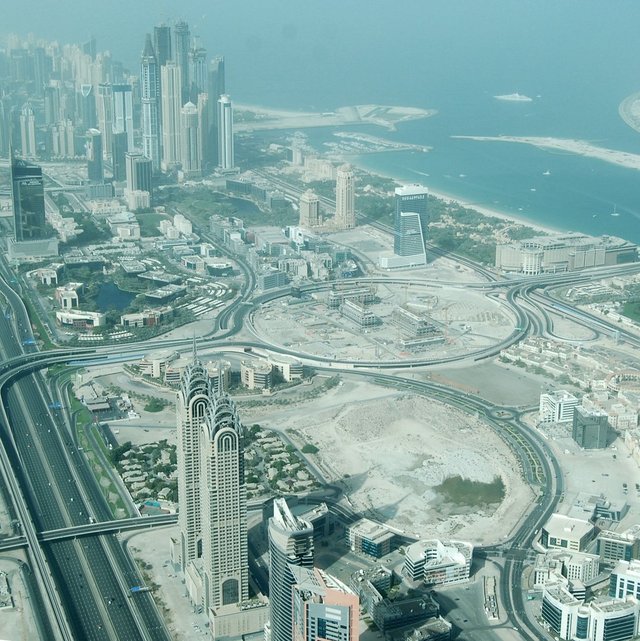 The urban environment of Dubai is less than half a decade old, and the skyscraper is not a local architectural typology. It is not the cultural relevance that makes these supertall towers popular but perhaps the global meaning they convey; skyscrapers exude a sense of the local clients' aspirations to power and control,[7] hence more visibility and more influence. The export of the skyscraper is also associated with capitalist economies. They concentrate on establishing 'expensive, highly ordered surroundings that naturalize the high salaries of their clients…'[8] Moreover, the transfer of American architectural skills substantiates increasing influence.[9] In what some perceive as a new form of cultural colonialism, global firms have been called in to design many buildings in Dubai.

Dubai may exhibit some fascinating instances of a globalized environment; it also includes many segregated landscapes of management, consumption, and production. The landscape constantly shifts between these two extreme conditions – from attention seeking emblems to faceless buildings, concealed coastal backdrop, and forgotten sites. If we accept these twofold extremities and the multi-layered aspect of what lies beneath, then we may start to experience new ways of 'seeing' Dubai – and hopefully a new way to deal with its urbanity and socio-spatial integration. The water body for example was historically used as a living space and even provided an extension of the city. Today, the water of the Gulf has become an ignored backdrop – as opposed to the identity shaped by the livability on the water. This selective approach to the production of visuality is problematic. One result is the exclusion of segregated sites and marginalized communities in terms of representation. 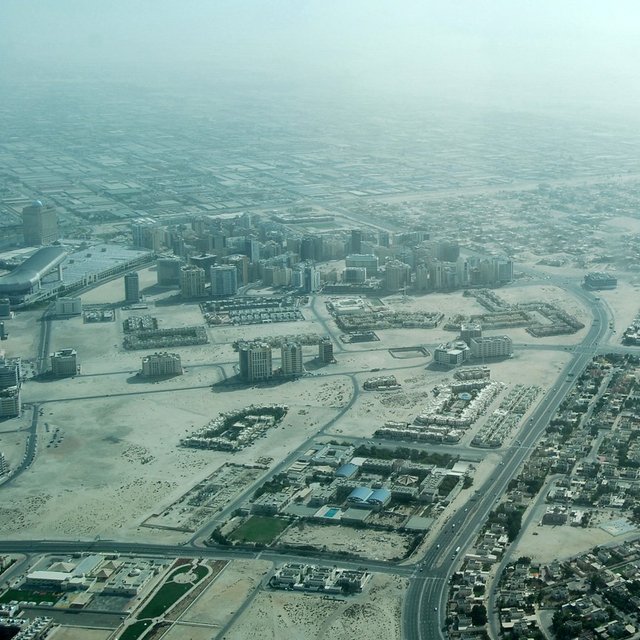 What kinds of built environment can the globalized information-based economy produce in Dubai? The city may struggle from a loss of local identity, disconnection to place and segregated landscapes. But it can also hold the promise of correction and new ways of reinvention. The urban landscape clearly needs further integration and a consideration of more inclusive approaches. Architecture cannot change the processes of globalization but it can promote or disrupt it. As Ellen Dunham-Jones argues:

By understanding how the spatial segregation of contemporary development patterns has increase social stratification, we are able to recognize ways to make a difference. Local interventions that spatially enable individuals to form communal relationships to each other and sustainable relationships with the earth can induce change.[10]

Nadia Mounajjed joined the Middle East Centre as a Visiting Fellow in November 2012. Between 2007 and 2012, she worked as Assistant Professor of Architecture and Design at the American University of Sharjah, while serving as the research advisor to the Sharjah Art Foundation. Her research interest lies in body theory, the politics of space, visual culture in the Middle East and the Gulf region, with a special focus on Syria and the U.A.E.

Saadiyat and the Gulf Labor Boycott

An Emergent Design Approach to the Gulf