DISPATCH - FITNA AND THE IRANIAN ELECTIONS

A rally orchestrated by the state. Tehran, 2010.

Two days remain. Reformist candidate Mohammad Reza Aref, after receiving a letter from former President Mohammad Khatami, has stepped down to clear the way for Hassan Rohani, the other pro-reform contender. I believe the question for us and for our friends and comrades in prison and under house arrest is whether or not these contenders and their allies and mentors support our movement. After the last rigged election, in 2009, the majority of our civil society, opposition groups, reformers and activists transmuted into the Green Movement. Some fundamentalist candidates defend the suppression of this nonviolent movement, and reformists today do not dare to speak up for the Green Movement. If they do, they will be perceived as supporters of Fitna, a term that Iranian authorities, and above all the Supreme Leader, use to characterize the Green Movement.

Throughout history, authorities have perceived Fitna as sedition incarnate: hostile to the public interest, goodness, order and ultimately, God. Fitna implies opposing an apparatus with its own language, symbolism and history; it suggests subversion of the status quo on its own plane. Fitna (fétné) is found in Quranic verses and Persian poetry, as well as in the ideological lingo of the Islamic Republic. Fattan and fattané, the masculine and feminine forms, refer to a man or woman who mesmerizes others, and arouses a rebellion, even a sexual one. In the eyes of the regime, opposition leaders and we, the protesters, are not only deserters or defectors but also Fétnégar-those who would present heaven as hell, and the righteous as the unjustifiable. Iran's leaders portray Fitna as a deception, because it rouses the public and popular beliefs in order to revolt against the official populism. As Edward Said would have put it, the 'professional intellectuals' served the regime's ideology, while the 'amateur intellectuals', those who have not been indoctrinated in the ways of power, served Fitna, namely, the Green Movement.

The image below, depicting a demonstration in 2009, presents political action through a cluster of doxas-primarily, martyrdom. Each year Iran pays honor to the oppressed as the true, innocent defenders of pure and righteous Islam through T'aeziye, a passion play. With the support of the regime, the sacred battle against evil is reenacted every year during Ashura, commemorating the martyrdom of the Prophet's grandson, Imam Hussein, and his 72 companions. Yet in this image, it is the protester who wears the helmet of the army of righteousness and virtuosity. His sign reads, 'Oh my martyred brother, I will take your vote back.' The color green, understood by Shi'ites as the color of the true descendants of the Prophet and his grandson, is, through this carnivalesque protest, turned against a regime that calls itself the 'Sacred System.'

This text was published in collaboration with Creative Time Reports. 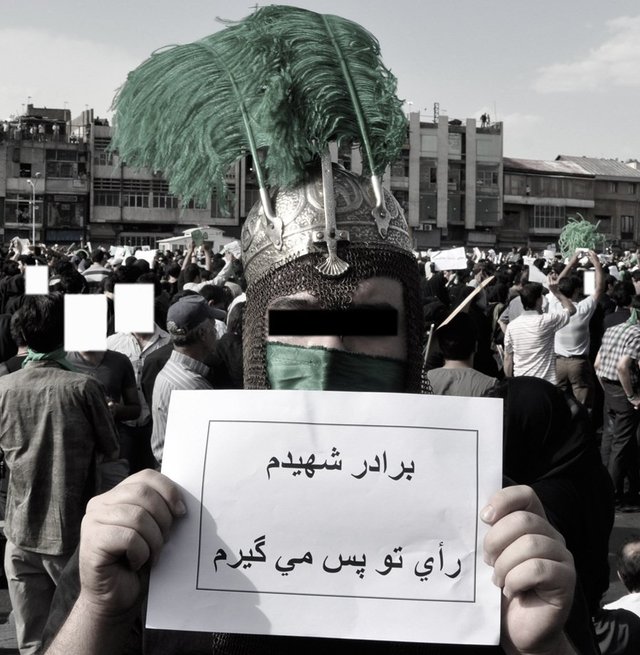 L'Anonyme is an artist in Tehran who has asked to remain anonymous due to security concerns.

Parastou Forouhar in conversation with David Hodge and Hamed Yousefi

The Art of Shirin Neshat