Newsha Tavakolian was born in Tehran, Iran in 1981 and is a self-taught photographer whose recent body of work bridges the worlds of documentary and art. Tavakolian began her professional career as a photojournalist aged 16 and has since had her work published in such esteemed international titles as National Geographic, Le Monde and the New York Times Magazine. More recently, she has exhibited her work in galleries around the world, including in The Third Line Gallery in Dubai and the Aaran gallery in Tehran. For this issue of Ibraaz, she talks to Contributing Editor Sara Raza about her practice and the issues relating to contemporary Iranian society that remain close to her heart.

Sara Raza: How did you embark on your present career?

Newsha Tavakolian: I am a self-trained photographer and I defined this path for myself at the age of 16, when I realized that a strict academic route was not for me. So I taught myself how to use a camera and started taking pictures and specializing in photojournalism. It was a difficult path to forge, especially as I didn't follow the traditional trajectory of studying photography at university. But I fast gained the respect of my peers through a determined attitude to succeed in what was, and still is, a predominantly male-dominated industry and one that is fraught with politics.

SR: I am sure this wasn't without its challenges? 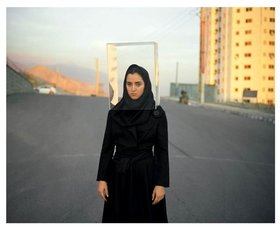 NT: In Iran, there are various glass ceilings and invisible barriers, especially for women, and it was a real challenge for me to break through these and pursue my career. I made a conscious decision early on to develop a professional interest in showcasing positive portrayals of women and started my career at the only Iranian national women's publication, Zan-e Rooz, as a junior photographer. By the age of 21, I had established myself as one of Tehran's few female photojournalists and was working with a number of international journals such as the New York Times, Le Monde and many others. I travelled to neighbouring countries in the Middle East to cover wars and natural disasters and developed a keen interest in neighbouring issues that affected the wider geo-politics of the Middle East.

SR: When did you decide to embark on a career in the fine arts?

NT: I always thought about exploring and experimenting with fine arts, and being self-taught, I structured and mapped out my ideas visually. However, it really became apparent to me in 2009, following the protests that took place during and after the Iranian elections, that this was the direction I wanted to take. During this period of turmoil there was a widespread crackdown on documentary filming and photography and photojournalism, as images were circulating internationally and many photographers had their cameras forcibly confiscated by the police. There was a real sense of paranoia on the part of the government, who wanted to control the distribution of press images and it was really at this point, while I was searching for a new vocabulary in which to express and explore my ideas that I turned to experimenting with fine arts more explicitly within my practice.

SR: There is an old Persian saying that suggests that poets can get away with anything but those who write prose are often met with opposition. Do you see this as somewhat comparable to the situation facing artists in Iran?

NT: That's interesting – I think that's one of the reasons why I developed my practice to have a more poetic visual language and decided to explore more ambiguous and socially taboo topics as the underlying subject matters in my work. I found that through exploring ideas pertaining to visual culture, I was able to give voice to many issues that were important to me, such as women's rights in Iran following the Islamic Revolution and especially now, as the country exists at a political crossroads both domestically and internationally and it is unclear what direction things will take.

SR: So have you abandoned your documentary practice? 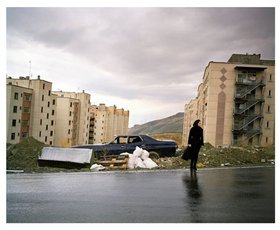 NT: No, not entirely, as I like to think of my current work as on the cusp of documentary practice and the fine arts. I am really trying to raise awareness for concrete issues by using documentary tropes alongside the more experimental languages of video and film, and introducing sound and object art. I think that from a critical perspective, my work has been extremely well-received, especially within a fine arts arena. For example, I was nominated for the prestigious Magic of Persia Contemporary Art Prize in London in 2009 and was one of the finalists. All this has been most reassuring for me that I am on the right path.

SR: Your first major exhibition project at Aaran Gallery in Tehran in January 2011 featured a study of various Iranian, un-official female singers who you interviewed and whose stories you transformed into an ambitious multi-media project that included photography, video and installation. What was the premise behind this project?

NT: I have a strong passion for music and I always fantasized about becoming a singer but in Iran women are banned from entering this profession and women can only sing collectively or as back-up singers for male vocalists. Therefore, I decided to embark on this project researching and finding real women singers and featuring them within a video project entitled Listen. I even went as far as to create a fake CD, a prop that featured photographs and titles that I created based on feminist Persian slogans. I wanted to make a statement about this topic, which has been a subject of much debate in contemporary Iranian society.

SR: What was the reaction to your work?

NT: Surprisingly, I did not experience confrontation or prohibition from any morality police. The project had a positive reception from the public as well as from members of the press. Aspects of the show toured this year to La Caja Blanca gallery in Palma de Mallorca in Spain, and I also took part in a conference organized by the gallery at the Es Baluard Museum in Palma.

SR: Your next project is quite different to Listen – you are currently working on an artist's monograph of photographs taken of the Hajj pilgrimage. What drew you to create this body of work? 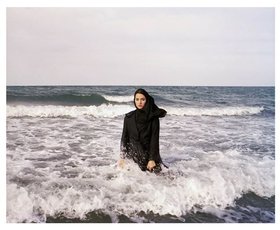 NT: I have always been interested in deconstructing the masculine aspects of Islamic pilgrimage. Hajj is one of the five pillars of Islam and it is considered mandatory for practising Muslims to visit Mecca once in their lifetime if they are able-bodied and can afford to. In December of 2008, I participated in Hajj, making the journey to Mecca to document female observers and provide an alternative perspective to what I believe to be a masculine undertaking. Some of these images will be presented at the British Museum in 2012 as part of a major exhibition on the Hajj [entitled Hajj: Journey To the Heart of Islam] and I hope that viewers will read my photographs as a form of alterity on traditional aspects of Islam and the ways in which ritual is performed in relation to gender.

Encroachment on the Everyday