Nevin Aladağ's work spans mediums and subjects, from best friends, to stilettos, to the sounds of a city produced by turning unfamiliar and familiar objects into instruments and unfamiliar things into unwitting musicians. In City Language I (2009), for instance, pigeons picking birdseed off of an abandoned bozuk on the floor become the maestros of a random composition; a tambourine tied to the end of a boat expresses the rhythm of the water over which it is bouncing. Borrowing the words of Dirk Snauwaert, 'Aladag introduces the notion of boundaries' – that feeling of 'being entangled with identity and the ephemeral nature of the signs that perform identities in flux which gives her works its own place in the debate on issues of culture and globalization.' It is in this spirit that this this conversation between Aladağ and Walter D. Mignolo is framed, in which Aladağ talks about the diverse influences behind her practice. 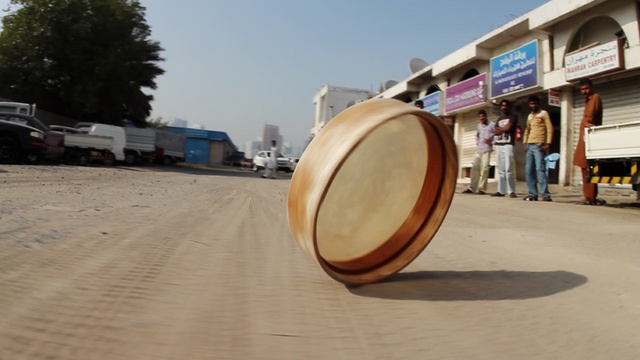 Walter Mignolo: I became aware of your work at the 11th Sharjah Biennial and was drawn to Session (2013), a three-channel video installation in which you used wind, sand and the street to 'play' each of the instruments you featured. I felt that your work fit perfectly into Yuko Hasegawa's and Hoor al-Qasimi's vision for this Biennial, Re-Emerge: Towards New Cultural Cartographies and would like to start the conversation by asking how you felt your work fit into this particular biennial's frame?

Nevin Aladağ:  Maybe I can answer your question by explaining my intentions for this video work. First of all, I felt that Yuko´s and Hoor´s invitation was quite wide-ranging in perspective, in that it included the urban space, with its changeability and the diversity in its people as well as the idea of gardens and courtyards, not to mention the tradition of the courtyard garden as an 'in between' area when it comes to the private and public spheres.

In response, I chose to concentrate on a medium that would represent the people living in Sharjah – the musical instruments that I found there: Darbukas, Tablas, Tambourins, small bells, Tympanons and so on. I realized through researching the instruments found in Sharjah, that they are mainly percussion instruments and are from Pakistan, India, Iraq, Africa as well as from the Emirates. These instruments acted as the voices of the people who are part of Sharjah and who deal with the structure, the architecture, as well as the nature of the city.

Without going too far, you can see this experimental video piece as an orchestra that not only represents the people living in Sharjah but also tries to get a handle on the environment and the situation.

My approach to an exhibition invitation can be direct, or intuitive, in that I try to get close to the context within which I am being invited. I guess with my first visits to Sharjah, I was trying to find a topic on which I would like to work and figured that I would like to talk about the city and its elements through music. 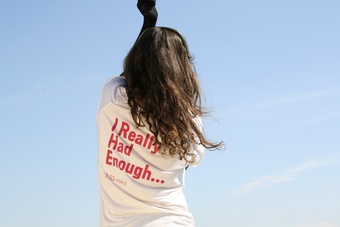 WM: I was also very impressed with one of your previous works that seems connected to Raise the Roof (2007), in which you also talk about the city and its elements through music. Yet you could say the works are apparently disconnected, since one work takes place on a roof in Germany and the other uses the sand of the Emirates. A roof – a man-made construction – could be found anywhere, in any city, but you cannot find sand anywhere on the planet, particularly the scenario in which the sand is seen in Session. On the roof there are human beings, female dancers. In the other there are instruments, or objects that can generate sounds in their contact with cement, the street, sand or the wind. In both there is 'music'. I would like you to comment on the trajectory your work has taken in this respect – this focus on music as a material…how did you get to conceive video/installations like Session and Raise the Roof?

NA: Your comparison of my video work Raise The Roof and Session is interesting as you are right with noting the missing human presence in Session and the concentration on the city and its elements and surfaces. 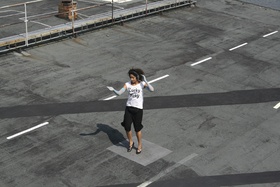 The performance Raise The Roof took place on a former border section between West and East Berlin; this roof served as a patrol route for GDR border soldiers and was heavily guarded. In the work, four female dancers move, each one to her own, to songs that cannot be heard by the viewer. With their stiletto heels they appear to tear up the tar covered rooftop; the electronically amplified sound of these charged dance steps creates a new and wild hearing experience, which in turn unites the isolated movement of the dancers. In Raise The Roof, music is used in an experimental way, as the stiletto heels become a powerful percussion tool and the women are acting as representatives while tearing through their limits, also using stages they are dancing on. Session is more abstract and maybe more poetic as the musical instruments are liberating themselves from the skills of an author and somehow become 'alive' in their own right.

WM: You mentioned that the performance of Raise the Roof took place on the border between former East and West Berlin. I know that you were raised and educated in Germany (Stuttgart and Munich). I suppose that, during the early years of your life, through your family memories, food, photos, language and other 'feelings' from Anatolia were inscribed into your senses and in your knowledge. Whether you speak Turkish, you grew up listening to Turkish and German, right? What you learned in your sculpture classes in Munich, trained your skills and provided you with a tool. How do you connect the experiences in migrant communities in Germany, the education you received from your family, with your 'instrumental' training in Munich? The reason I ask is because I am interested in border and in border of migration, which engenders migrant consciousness. When I saw Session and then did some research on your work and web page, I had the intuition that 'migrant consciousness' is very much ingrained in your work. I found these sentences in your web page:

Aladag has also often 'acted out' popular cultural practices related to group identity, of migrant communities or social class or both at the same time. Wherever she evokes such practices, as in the contrasting cultural tropes of tradition and modernity in folk music and western pop, both of which are enacted in the urban fabric in City Language I and II, it is rhythm that points beyond their interpretation as mere signs.

NA:  In Stuttgart the neighborhoods are very mixed, not like Berlin where urban planning pushed the Turkish migrants into certain districts. So I didn´t grow up in a migrant community. But, depending on your upbringing and cultural education you are sensitized to different things, yet this is not an exclusive migrant experience: every human being is subjected to a diversity of influences. 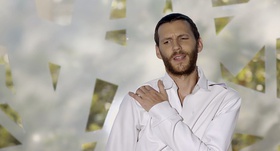 More than old memories, I would say that the experiences I had growing up in Germany made me look for new languages, connotations, displacements, breaking social and other boundaries by using metaphors and so on.

I rather observe the pluralism that I experienced as something that affected me, especially with growing up in Germany and being of Turkish and Kurdish origin. You automatically become conscious of differences, since society is holding a mirror up to you. Even though many societies dictate a hierarchy, I always refused it and maybe with my works of art I sometimes try to find new ways of communicating shifting perceptions by decontextualizing and reformulating objects, music and language.

WM: You have exhibited your works in Turkey and in Germany, in other places as well, but I mention these two locals because you are related to both in different ways. How do you approach your work when you know it will be exhibited in Germany or in Turkey? What can you say about how the audiences respond to the same exhibit shown in different contexts? I am thinking here about your work titled Significant Other (2011). 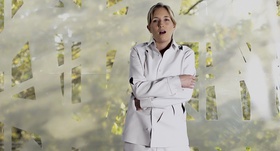 NA: I consider myself as an internationally working artist. Germany and Turkey are not especially important for me. I am used to working in many different places and contexts. I like to refer to the local situation and circumstances. That's a challenge I like to take. For example, I have performed my two works Raise The Roof and Occupation (2009) in many different places including Berlin, Taipei, Catania, Linz, and Paris. With these, I realized that, depending on the city the performances take place, the 'artwork' functions and comes out with slight but concise differences.

The work Significant Other has a global theme, which somehow affects everybody as it deals with affiliation, since it is talking about partnership and friendship. Most people will, in many different ways, relate to what is said in the work or will disagree with it.

Walter D. Mignolo is an Argentine semiotician (École des Hautes Études) and professor at Duke University, who has published extensively on semiotics and literary theory, and worked on different aspects of the modern and colonial world, exploring concepts such as global coloniality, the geopolitics of knowledge, transmodernity, border thinking, and pluriversality.

Shooting What is Missing