The Noise of Cairo

'Artists are feared because they are loud and make a lot of noise.'

- Karima Mansour, choreographer and dancer, The Noise of Cairo, 2012

The Egyptian revolution in 2011, which ousted incumbent President Hosni Mubarak, released both a tidal wave of optimism and a surge of artistic activity, ranging from new media art, graffiti, open-air film programmes in Tahrir Square, and performances that would previously have been monitored, if not censored and shut down. In the wake of this unleashing of creativity, artists from Egypt have been exhibited in international shows including the 54th Venice Biennale to group shows ruminating on the revolution and the art it produced. While this interest in 'revolutionary' art has attracted criticism for the way it seems to be capitalising on market and cultural interest, the link between the revolution and artists, many of whom have combined their practices with activism, remains a captivating aspect of this seismic event.

In this interview for Ibraaz, Amira Gad speaks to German filmmaker Heiko Lange about his film The Noise of Cairo (2012), which explores the relationship between art and the Egyptian revolution. Featuring a host of the city's cultural figures, including artist Khaled Hafez, graffiti artist Keizer and Director of Townhouse Gallery William Wells among many others, The Noise of Cairo is a journey into the city's artistic scene, exploring the role it played during the revolution and how the events of the revolution and their aftershocks are now being processed. .

The Noise of Cairo: A Documentary about Cairo, Art and Revolution, 2012

Courtesy of Heiko Lange and scenesfrom

Amira Gad: How did you come to make a documentary about the art scene or artistic production in Egypt during the revolution? Why, for instance, not just focus on the uprising 'phenomena'? And why did you choose Egypt?

Heiko Lange: The idea for this documentary came while watching the beginning of the demonstrations in Egypt on Al-Jazeera. I was overwhelmed by the will of the people. So I watched the dynamic of the events on TV and after some days I started seeing all this evidence of creativity on the streets. All these posters, flyers, slogans, the chanting and the Egyptian humour. I was getting more and more interested in the creativity that comes out of such radical change and I started to wonder how this radical change would influence Egyptian art and the artists and what role artists played before, during and after the event. These were the questions I had in mind when I went to Cairo. It wasn't about giving the revolutionary art 'value' from a western point of view. I was more interested in the emotional debate from an artistic point of view.

AG: Did you feel there was a necessity or relevance in expressing and showing the Egyptian art scene on their behalf? And how was the film received when you premiered it at the Townhouse Gallery in Cairo in April this year?

HL: Most of the time, artists start reflecting on difficult issues very early, perhaps earlier than other people, and art can sometimes act as a catalyst for change. It can offer a critique without necessarily being censored. But there are a lot of different people and groups who played important roles in this event. The Noise Of Cairo offers just about one special point of view – that of the artist. 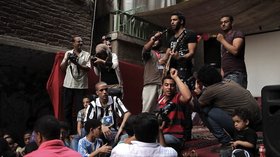 I was a little bit nervous before the premiere at Townhouse Gallery because I am not an Egyptian filmmaker, I don't live in Cairo and I didn't take part in the events. I don't even speak Arabic. So I was nervous about the fact that it could seem a little bit arrogant, that a German filmmaker should come to Cairo and shoot a documentary in ten days about the art scene after the revolution. I am not sure what would happen if an Egyptian filmmaker came to Berlin and tried to shoot a documentary about the Berlin art scene! But in the end, everybody was happy and somehow thankful for this film and I got only positive feedback - personally and in reviews. The audience liked the atmosphere that the film captured, the mood in the summer directly after the events. Some people told me that the documentary keeps them motivated and keeps them going on at times when it is much harder to stay focused.

AG: What are the comments or observations you took out of this experience? As a Berlin resident, are you able to relate to it to events such as the fall of the Berlin wall? Do you feel that this phenomenon expresses universal values relevant to all, in terms of the idea of freedom of expression?

HL: Such major events are so powerful that people have to find a way to express their feelings. And art offers one way to express these feelings. The question is: Will this art survive? What will happen with the commercialisation of this revolutionary art? Do artists change their style of work because they are influenced by this revolution? I still have these questions and I think the answer will come but only in time. I was 13 when the Berlin wall came down, so I don't feel that I am in a position to relate this to the Egyptian revolution or to other major events in world history. But I guess that such social changes release a lot of creativity everywhere in the world.

AG: The opening scene of the film is a shot of Tahrir Square and a man holding the Egyptian flag. According to Sherwet Shafei of Cairo's Safar Khan Gallery, who appears in the film, the flag has played an important role in the revolution, becoming symbolic of freedom. Does this also explain your choice of opening scene? Would you say that the flag has a dual status, in that it could also be perceived as a symbol of oppression and the previous order?

HL: I think the Egyptian flag played a big role in what I saw. The flag was everywhere: in the streets, on houses, in cars. Everybody was using the flag as a symbol for unity. That's why we choose this scene for the beginning of the film. I don't know but I could imagine that the  flag has a dual status and that it also could be seen as a symbol for oppression. I guess that flags are often used as a symbol for identity - in a positive or negative way. 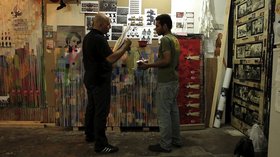 AG: Similarly, the opening line of the film is: 'Our education, the media, and our culture prevented us from expressing ourselves'. Artist Khaled Hafez says: 'My generation is programmed to believe that a revolution will never happen and we are products of this regime. We were not trained to express ourselves overtly and this could only happen within our studios'. Did you face any obstacles in making this film, such as censorship by the Egyptian authorities?

HL: No. We had no problem with censorship or anything else while making this film.

AG: Freedom of speech is an important theme in the film, with many of your subjects saying that the revolution has opened up the possibility for freedom of speech. However, this newly acquired freedom is also a new language that needs to be learned. Would you agree with such a statement? Is freedom a language expressed through art?

AG: To quote Sherwet Shafei again, she said that 'the expression of dealing with the event of revolution is fantastic for artists. When revolution succeeds, there's a new life, new expression and art is part of it', while artist Hany Rashed on the other hand, when talking about this new 'freedom of expression', says: 'This is new to us as artists: Without oppression, what are we going to talk about? What are our topics and concerns now as Egyptians?' How would you propose to answer this question?

HL: I think this conversation will come up sooner or later. Maybe not this year but it will come up and artists will start reflecting on the event and the changes it has wrought. It will be interesting to see what kinds of topics are coming out in the next few years and what kind of questions artists will ask. Right now, I have no idea what these questions will be but there will surely be many. 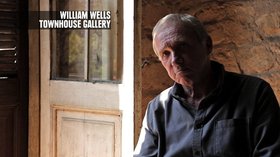 AG: In your film, William Wells (the Director of Townhouse Gallery, Cairo) says that the art produced in light of the revolution is not yet critical, it's still in an emotionally expressive state and that for it to be reflective would need a few more years to gestate. Similarly, artist Khaled Hafez says: 'I realised five months after the revolution that it was too early to paint the revolution, it was still too emotional. […] The best lesson I learned is to go practice my role as a citizen and not just as an artist. A lesson I learned at the age of 48'. What do you feel the role of this documentary is, given that it was shot in the midst of the revolution? What do you think its role is (or could be) today, a year later, after its making?

HL: The documentary was not shot as you say in the middle of the revolution. We were in Cairo at the end of June and beginning of July 2011. The scene on Tahrir Square at the beginning of the film was shot by Hani Eskander, an Egyptian filmmaker. It is hard for me to give value to my own documentary. But as I mentioned before, this film is like a photograph from that time, a snapshot of a moment where everybody was enthusiastic about the things that were going on. There was so much positive energy that came directly from the events. Cairo was vibrating and it was overwhelming. I guess when people see this documentary they will remember how it was.

AG: To conclude this interview, would you like to share your thoughts about the outcome of the presidential elections, or the current situation in Egypt post-revolution? Do you have any intentions on making a sequel to your documentary film?

HL: I am thinking about coming back to Egypt in some years to shoot with all the artists again. It will be very interesting to see what has changed and what topics will be discussed.

Heiko Lange, born in 1976, is a Berlin based filmmaker. He has worked as a director, writer and producer for TV shows, documentaries and music videos for more than 10 years. The Noise of Cairo is his first independently produced documentary.