Sara Raza: 3rdi (2010-11) is both a fascinating and yet controversial performance work, what's the premise behind this project?

Wafaa Bilal: 3rdi functioned as a platform for an alternative distribution of non-narrative images. So, in effect, it is a continuation of aspects of my practice that examine the articulation and reception of public and private information. The camera implanted on the back of my head spontaneously captured one image per minute presenting my daily life, and transmitting them to a website for public consumption www.3rdi.me/. In the case of the exhibition at Mathaf, images were projected within the installation space. The concept for 3rdi arose from a need to objectively capture my past from a non-confrontational point of view, hence the positioning of the camera at the back of my head. Whilst I was in transit and chaos at many points in my life images failed to fully register and I was unable to fully absorb them.

SR: Would you say the project is anti-photography, so to speak?

WB: That's an interesting question because generally photography, and the practice of taking images, is highly subjective. If you consider documentary photography as the most subjective form of image making, and reverse that idea in my work, you will see that I never promise the spectacular, but rather the mundane. The images that the camera captures in my work are low resolution, akin to the quality achieved on cell phones. I am really interested in the disposable and non-hierarchal notion of photography.

SR: In February of this year it was reported that you were experiencing problems with the device as your body was rejecting it and the camera was removed temporarily in order for the body to heal. How has this break affected the project that was intended to last one whole year? 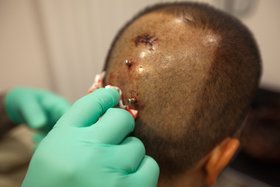 WB: I had to allow the area where the pins that held the camera in my head are attached to heal properly, otherwise I would suffer persistent infections. During this hiatus I have been wearing the camera around my neck and it is still recording images and feeding them via the Internet. In late summer I shall have the device re-attached and will undergo another surgical procedure in order to allow me to complete the intended 12 months course.

SR: What about physical and physiological challenges this is imposing on your body, how are you managing that?

WB: The project has not been without its physical challenges, it was a very painful procedure and it has been uncomfortable to get used to. The camera is a foreign object and my body is forever trying to repel it by cutting off the blood supply to that area, but I am determined to continue fulfilling the aims of this project through the assistance of my team and medical professionals.

SR: There's an aspect to your work, which is explicitly relatable with remembrance and the pain of others, which reminds me of the practice of flagellation during ta'ziyeh.[1] Ta'ziyeh is also the name of the informal theatrical adaptation and is the first form of theatre to exist in the entire Middle East has had a great influence on Iranian modern and contemporary art and cinema as Iranians are a predominantly Shi'ite nation. Would you say that it has influenced your practice if at all?

WB: That's a really interesting reading of my work. I suppose I've never really thought so explicitly about the Shi'ite connection within my own practice. I was of course raised Shi'ite and was born in Kufa, an important Shi'ite city. I can totally see why you would say that and perhaps on a sub-conscious level there is that connection.

I haven't really participated in ta'ziyeh since I was a child, but for sure it was a large part of our lives. Despite our religious practices being in direct opposition with Saddam's regime, we still participated in our rituals, which were very performative. They also reflected on masculinity and Islam with the ritual of young men beating themselves and performing flagellation in sympathy for the martyred saints.

SR: My reading of your performance piece …and Counting (2010), in which you employed a tattoo artist to draw a borderless map of Iraq on your back and mark the death of Iraqi civilians and American army men and women, also bears an uncanny resemblance to the practice of ta'ziyeh flagellation, wouldn't you agree? 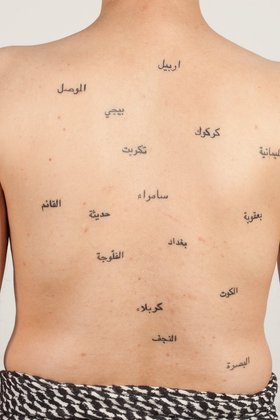 WB:  ….and Counting, was part of a 24-hour performance piece staged at the Elizabeth Foundation for the Arts in New York and was a form of expressing sorrow that could draw parallels with ta'ziyeh. The performance was a way for me to express my sympathy for both Iraqi and Americans who had lost family members in the conflict. I wanted to raise awareness of this issue so I had the American soldiers tattooed in red permanent dots, whereas the Iraqi civilian deaths were marked by blue dots of UV ink, which are more or less invisible unless seen under black light. For sure there are some connections with the mourning performed during ta'ziyeh, but beyond that I wanted to highlight the issue of visibility and invisibility. I also asked visitors to donate a dollar from each dot towards scholarships for Iraqi and American orphaned children.

SR: Interaction with the public appears to be an important aspect of the 'spectacle' surrounding your practice.

WB: I think the public interaction with my work goes beyond simply the spectacle. The spectators as audiences are an important part of my work. For example within my earlier work Domestic Tension (2007) I was confined to the gallery space for 30 days and viewers logged onto the Internet to either communicate with me or shoot the paintball gun. The point of the work was to raise a collective awareness of the war against privacy within the age of the digital. It was in fact a critique of the notion of the spectacle. The core of the project was to raise awareness of US remote wars.

SR: Did you have any control over the viewers who contacted you via the web during the project?

WB: No they were from all walks of life, consisting of hunters, hackers and general public who entered the chat room. However, I tried to not to become the focal point of the conversation and tried my best to maintain a degree of distance, unless there was of course a specific question that I felt I had to respond to.  Post-project, I published a book Shoot an Iraqi: Art, Life and Resistance Under the Gun, about my life and the premise behind Domestic Tension. 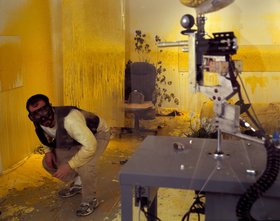 SR: What has been the reception of your work in the USA?

WB: I have received a lot of mixed responses for my work internationally, the most common response is why I am subjecting my body to these art experiments, but generally it has been very positive with a genuine desire to learn more about my work. In the USA, I teach at New York University's Tisch School of the Arts, specializing in photography and imaging. The school is acclaimed for its progressive research into performance and performativity in the visual arts and this context complements my practice, which is process based.

SR: What other projects are you working on?

WB: I am working on a new photographic series Ashes, currently in production, that explores the possibility of archiving  human DNA by creating miniatures. The series will premiere at Selma Feriani Gallery in London in the winter of 2012.

SR: Where did you obtain human ashes?

WB: At this stage, I can't reveal how I obtained the ashes, but the project is more about archiving, a long standing interest of mine.

SR: Are you interested in (re)visiting histories, particularly the history of Iraq?

WB: I am interested in re-visiting and pairing pre-Islamic histories with modern and contemporary Iraqi Islamic history, a practice that under the current system has been ignored and in some cases considered profane. Yet so much of modern Iraqi history and culture is rooted in the stories told in pre-Islamic literature. Not acknowledging this verges on the profane.

SR: This reminds me of the Shahnameh (book of kings in Farsi), the tenth century fable by Iranian poet Ferdowsi and Shii'te Islamic tales centred around the Prophet's family. Interestingly, both sets of stories have been used throughout history to install patriotic and nationalistic dogmatic identity amongst Iranians. For example, the Shahnameh's central protagonist Rostam, the archetypal Persian hero, has been replaced by the image of Ali and various Shii'te saints and Ayatollahs in an 'Islamized' version following the 1979 Iranian revolution and the Islamization of the country.

WB: I think the image of a 'heroic' figure is completely manipulated. Ayatollahs, heroes, martyrs and kings are all selective constructs. Through my art, I hope to raise a collective social consciousness, one that transcends purely religious and nationalistic dogmas and opens up a discursive dialogue. Of course, I am not discrediting the sub-conscious baggage that we all carry with us, be it religious or patriotic. As artists, and indeed as human beings, we all carry certain weight and some of us choose to acknowledge this within our practices or enactment of daily life, whereas others purposely choose to ignore it.

Wafaa Bilal's History of the Arab World is part of the Kamel Lazaar Foundation Collection. View the work here.

[1] Ta'ziyeh is the Shi'ite Muslim ritual of mourning the death of Prophet Mohammad's grandson Hussein, who was martyred in 680AD during the battle of Karbala, Iraq.