A recent Tate Modern panel discussion, which formed part of Delfina Foundation's The Public Domain programme of artistic research and production, brought together the collective Decolonizing Architecture Art Residency (DAAR: Sandi Hilal, Alessandro Petti and Eyal Weizman), historian and political scientist Ilan Pappé, and curator and critic Okwui Enwezor. The event marked the publication of Architecture After Revolution, a book outlining DAAR's work as an art and architecture collective and residency programme based in Beit Sahour, Palestine. To start the conversation, which addressed a broad spectrum of issues surrounding the state of Palestinian refugee camps, including the politics of space, civil and human rights, and post-nationalism, DAAR's founding members presented aspects of the collective's research and approach, after which Pappé and Enwezor reflected on the topics at hand.

In the first presentation, Eyal Weizman articulated how DAAR uses architecture to trace relationships between communities, institutions and the spaces in which they are located. He demonstrated how the analysis of a building – an epistemic resource 'through which the geopolitics of the region is refracted' – could reveal latent political tensions. In this case, it was the Palestinian Legislative Council building in Abu Dis, which exists as something between a construction site and a ruin, since building started in 1996 and was stopped in 2003 due to the collapse of the Oslo Process, the eruption of the Second Intifada, and the raising of a separation wall only a few metres away from the planned headquarters. 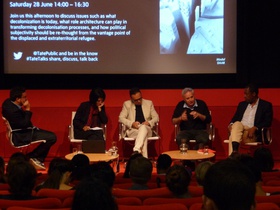 Weizman explained how the location of the building is a major conceptual point of focus given it is on the edge of occupied Jerusalem. Through this, Weizman introduced the research DAAR has conducted around the extraterritorial line – the boundary, or the border – as a political space so as to consider what happens when lines as drawn. Weizman brought up the Green Line, the border between occupied Palestinian territory and the State of Israel, noting how the line 'could be as wide as 3mm on the map, but as much as 250 metres on the ground.' Weizman then explained how this problem has haunted all attempts at partitioning Palestine. Thus, 'the thickness of the line itself,' which is 'the product of the law giving process,' is read in relation to 'cartography in conflict', becoming what DAAR calls an 'extra-territorial space'.

Having highlighted these politically liminal boundaries, Weizman then mentioned the events that occurred in Tahrir Square, thereby introducing the idea of the common assembly: another aspect to DAAR's research relating to how the displaced or extraterritorial refugee might bypass the regime space. 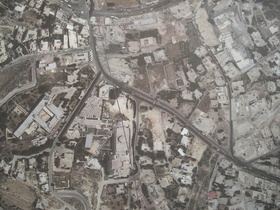 Continuing on from this point, Alessandro Petti began his presentation by noting: 'The public as a notion in the Arab world, and especially Palestine, is rather suspicious. This is because historically, it has always been associated with colonialism. And of course it is through the public that most expropriation actually happened.' Petti drew on the history of this expropriation, recalling the establishment of Israel in 1948, when several forms of communal land were brought into one single category of 'state land', which, as Petti noted, 'was of course the provision of 1967.' Thus, to rethink this notion of the public is a way to reactivate the commons –  the idea of collectively managed space. And paradoxically, as Petti explained, Palestinian refugee camps present places where the commons comes into focus.

In thinking about the camps as sites where the public and private binary collapses, Petti pointed to 'the great dilemma of normalization': the fact that, in the 65 years of their existence, there is an idea within the camps that they must remain in a temporary state so as to uphold the right of return. This reflects not only on the marginlization and political exclusion represented within these spaces, but also the evolution of the camps as spaces of political relation. 'For us as architects,' Petti stated, 'the camp in itself is a very political space in which every feature is a political project, because if you decide to build a roof, you could be accused of normalizing, of giving up your right of return.' 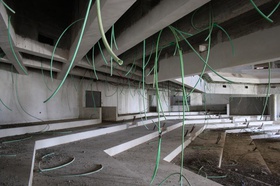 So what political culture has this situation produced? Introducing the collective's project, Campus in Camps – initiated in January 2012 to engage young participants in a two-year programme dealing with new forms of visual and cultural representation of refugee camps (established in the Dheisheh refugee camp in Bethlehem) – Petti explained how Campus in Camps does not actually negate the right of return but expands on it. It is, as he noted, a practice built on what refugees had already managed to establish within the camps – cultural centres, institutions: the establishment of presence without being accused of normalization. (To this end, Petti commented that, within these contexts, practice moves faster than theory.)

Continuing on from Petti, Sandi Hilal explained how the refugee camps are part of the narration of the right of return, posing the difficult question of what might actually happen if millions of Palestinian refugees return to their homeland after 65 years in exile. (Return to what? she asked.)  The issue of the return, and particularly the question of what might happen 'the day after the return' was key for Hilal, because systems need to be designed now rather than later.

Thinking about the common assembly and the recognition of refugee camps as  spaces of negotiation, Hilal then explained how DAAR has applied these ideas to the construction and management of a plaza built in the Fawwar camp, which is located in the West Bank. As Hilal observed: 'the idea is how you can speak and build projects that can build collectivities today ... in order to speak about the day after, to speak about the return, and to make the return a real possibility.' 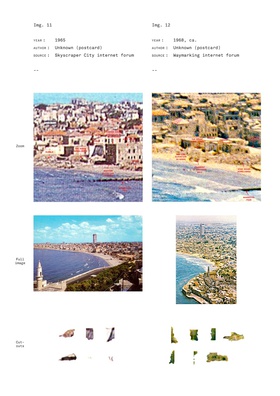 Iso-photographic drawings that piece together cut-outs from uncovered pho- tographs dating from 1917 to the late 1970s. Included here are the select photographs taken from the vantage point of Jaffa’s summit looking to Tel Aviv.

Hilal reiterated the issues the plaza raised as a result of its construction, including those of women's rights, and described how the site became a potent space of collective decision making, having been designed and built after extensive discussions with the community. Part of this design was the inclusion of four walls that surrounded the plaza so as to underline the fact that those who entered did so by conscious choice – what some might say is an essential prerequisite for any viable form of collectivity.

Following this, Illan Pappé responded by offering his own perspective: 'It seems that we are in an area of transition between Israel and Palestine, and particularly in the history of the Palestinian national movement,' he said, noting how Zionism is experiencing no such change given how it is evolving as it had intended by those who conceived of Zionism as a project. 'I think the Palestinian victims of Zionism are going though a transition though it is not easily acknowledged, because it means to accept that the national struggle has to be replaced by something else, or the way it has been conducted has exhausted itself,' he explained. 'It is not defeat as such, but it is the end of a period. Is it post-nationalist? Is it nationalist through other means? It doesn't really matter.'

Pappé insisted on focusing not on the language of this idea of post-nationalism, but on the idea itself. 'This includes getting rid of the scripts that are part of the notion of nationalism, as well as the utopian notion of the return as a mass movement – the final act of a reconciliation, after which you would say there is no more conflict between Israel and Palestine.' The reason? 'Because in this script, this can only happen after everything else has been somehow resolved: the question of sovereignty, land ownership, distribution of natural resources and so on.' Rather than invoking nationalism, Pappé implored that the situation be viewed as one concerning civil and human rights. 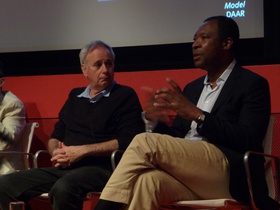 Okwui Enwezor then opened up the discussion by thinking about the relationship between the public and the civic in more general terms: a negotiation outlined in the architecture of the refugee camps themselves, which, as Enwezor stated, 'refuse permanence and completeness', instead 'privileging provisionality and incompleteness'. Observing how there is no such thing as public or private space within the camps, Enwezor saw a struggle for the definition of sovereignty on one hand, and on the other, governmentality.

This raised the question of what binds the cohabitants of such extraterritorial spaces together, which, for Enwezor, has nothing to do with the square, or the plaza. Broaching the issue of the post-national, he stated that, if 'we are in the post-national context, then at the same time the plaza is not only an illusion but also a fiction.'  Enwezor concluded that, in the context of the camps, 'what binds everyone together are civic negotiations that enable conversations around the question of the return.'

Here, the architecture of negotiation was read in both a particular and general sense, and highlighted the main question posed throughout what became a heated two-hour discussion: return to what, and what are the parameters within which such a return might take place? It was fitting, then, that a lively Q and A session culminated in the cyclical observation that we have entered both a post- and a pre-nationalist phase. It is this moment of transition – what some might call a twenty-first century condition – that DAAR's work explores. In their own words, it is 'the radical condition of architecture at the moment of decolonization – the very moment that power has been unplugged, when old uses are gone, and new uses not yet defined'.