Culturunners, the three-year road trip across the USA launched by Edge of Arabia (EOA) this September, can be seen as an illustration of EOA's expanded voice as an artistic tool for inter-cultural exchange and understanding. Following in the tradition of the travelling artist, Culturunners' organizers are concerned with the artist's task of representation as storyteller and documentarian, seeking to meet this role with accuracy, subtlety and a sense of humour. The overarching intentions of this new venture are to emphasize similarities over difference, to stimulate empathy between peoples, and to help disperse the generalizations and assumptions prompted by hegemonic narratives through individually expressed voices. 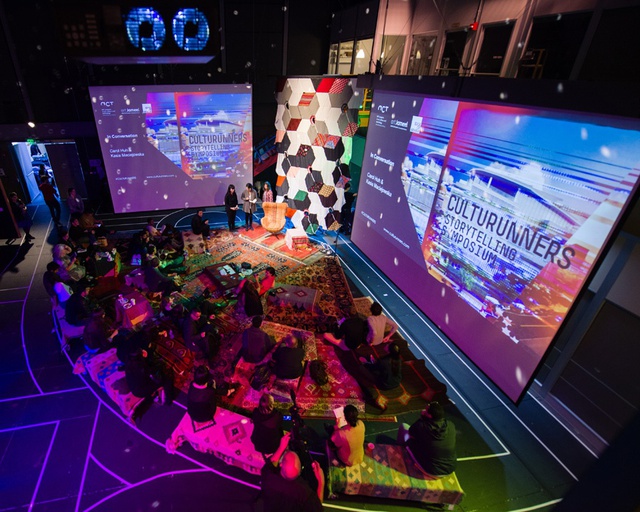 In addition to the 'journeying' lynchpin that informs Culturunners, military references re-appeared throughout the latest meet-up on the tour, which took place at Massachusetts Institute of Technology (MIT): from acknowledging that a significant amount of MIT's research funding comes in with a view to weapons and intelligence development, to drawing the metaphor of the Culturunners travelling studio – an RV – being akin to a Trojan Horse entering each location only to confound expectations through artistic play.

Yet, as travellers and guests visiting other people's lands, the tour members are keen to articulate their mission as one of dialogue rather than dominance or display. EOA co-founder (alongside Ahmed Mater) Stephen Stapleton sees the RV as a 'culture drone' in the ongoing exploration of how soft power can infiltrate social and geographical landscapes to gather information, just as much as it is an investigation into different ways of using art to distribute messages. 'Our thought was that the RV would literally and metaphorically be like a travelling drone that would equip people – and artists in particular – with the cultural tools and information they need to resist the singular narratives that we constantly hear about the Middle East in America, and about America in the Middle East,' he explains.

Just as the tour is a continuation of EOA's rhizomatic evolution into a platform with offspring projects, so its content seeks to spread and diversify in an uncontrolled way. This expansive project is not only an investigation into how best to communicate across challenging socio-political landscapes, but also an attempt to re-enact the critical exhibition space as a geographically fluid network of collaborations and interactions, gathered around a moving studio and a sequence of related events. Stapleton sees Culturunners as a movement, while EOA's Associate Curator Ava Ansari, the New York-based Iranian artist and curator who co-founded The Back Room, elucidates that their intention is for the initial community of contributors that they have collaboratively launched with to evolve into a wider web of artists, curators, critics and participants across the world. Ansari makes clear that rather than being a platform for artists from the Middle East, the project shines light on artists from any territory whose work contributes to a nuanced depiction of Arab or Islamic cultures or specifically addresses intercultural understanding. 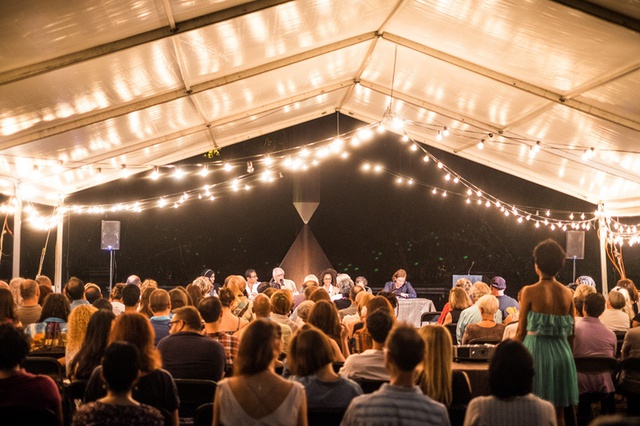 As manager of Culturunners, Ansari is responsible for programming the tour's main events and envisioning a road trip framework that will foster genuine exchange. As part of this curation a rolling series of artists will be invited to travel in the RV for specific periods during which they can develop context-specific works and practices, just as they would during a residency. There will also be physical and interactive artworks on board, including, for example, The Machine to be Another, one of several 'empathy technologies' being adapted for the tour, in this case applied through an Oculus Rift virtual reality headset that lets people experience a temporary culture swap. Ansari's ongoing interest in the artist as curator chimes with EOA as a dual curatorial and artistic project, and this mutual interest is particularly evident in Culturunners' process-driven and perpetually evolving nature. Discussing the central role that technology plays in the tour, she explains that the intention is to connect the technological methods that artists have historically used to communicate and translate with the digital methods at their fingertips today.

Alongside Stapleton and Ansari, the Culturunners mission is driven by Azra Akšamija, assistant professor at MIT's centre for Art, Culture and Technology (ACT). Her research into cultural empathy and the rhetoric of Islamophobia, under the title 'Culture Fabric', interrogates the role of architecture and textiles as agents and artefacts of identity and memory. Also an artist herself, the Sarajevo-born Akšamija lends the EOA tour its emphasis on the power of objects as multifaceted outreach mechanisms. She leads the project's collaborative creation of wearable technology (in the form of clothing and a textile skin for the RV) through which the tour will identify itself and trigger talking points while on the road. 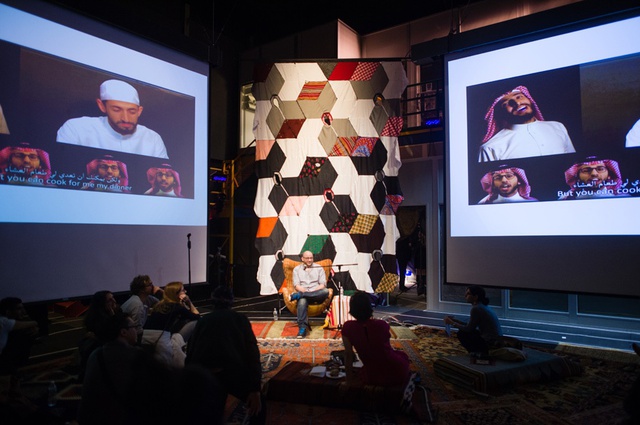 The tour launched on the UN's International Day of Peace, 21 September, in Houston, Texas. There the façade of the Rothko Chapel acted as a screen for EOA co-founder Ahmed Mater's footage from inside Mecca. In addition to this overlaying of footage showing Islam's most sacred focal point onto a Christian place of worship, significance was also drawn from the Rothko Chapel's purpose to inspire people to action through art and contemplation and to provide a forum for global concerns when it initially opened in 1971. Speaking about the decision to show this particular one of his works at the launch, Mater explains that making this film he felt like 'an artist on a mission, filming among the crowds from the back of a scooter – I was like a culture runner myself'. He adds that he wanted to show a realistic point of view to US viewers from inside Mecca as an exclusive place that only Muslims are allowed to enter, and one that outsider audiences wouldn't usually see.

At the launch, Culturunners also hosted a discussion between Rhode Island based Saudi artist Sarah Abu Abdullah, whose highly-acclaimed video work debuted last year at the 55th Venice Biennale, and Palestinian artist Taysir Batniji, the Abraaj Capital Art Prize winner of 2012 and recent ISCP Resident Artist in New York, along with historian Ussama Makdisi, Associate Director of Women's Studies at the University of Houston Dina Al-Sowayel and award-winning cultural activists Fred Baldwin and Wendy Watriss. From Houston a core team of artists and curators embarked on an initial trial leg of the road trip, driving through Louisiana, Alabama and Virginia, to explore what sorts of encounters may be possible from an RV and how they might be received. Both Stapleton and Ansari were taken with the absence of animosity and the remarkable openness they were met with.

At the following destination, Washington D.C., Culturunners was hosted by the Middle East Institute, founded by scholars in 1946 with the goal, 'to increase knowledge of the Middle East among the citizens of the United States and to promote a better understanding between the people of these two areas.' Here Stapleton was joined again in a discussion by executive director of the Beirut-based Arab Fund for Arts and Culture (AFAC) Oussama Rifahi, along with Abu Abdullah again, to discuss 'The (soft) Power of the Arts in a Changing Middle East'. Being supported by such a highly-regarded institution, alongside others of comparable status such as MIT, gives the tour a degree of clout and credibility through these formal meet-ups (debates, workshops, exhibitions) between which the more ad hoc and serendipitous components that will take place through the RV.

On 1 October, Culturunners landed at MIT's ACT centre for its programme of workshops and presentations. At this early stage of the tour, a curated group of artists, designers, technologists, curators, filmmakers and scholars were tasked with defining and designing what physical characteristics the travelling studio will take on, and the digital forms that will communicate the tour so that it can become an online archive of every event and encounter. The contributors were drawn from Stapleton, Mater, Akšamija, and Ansari's networks, and included – among many others from different countries and disciplines – Egyptian-Lebanese artist Lara Baladi; US pioneer in Parapraxis of Machine Design and head of the Design department at Rhode Island School Kelly Dobson; British author and reporter Henry Hemming; curator of Asian art at the Smithsonian Institute's Freer and Sackler galleries Carol Huh; Saudi-born, New York-based co-founder of the virtual reality empathy tool BeAnotherLab and Advisor at the UN Alliance of Civilisations Daanish Masood; Palestinian-born head of production at Telfaz11 Husam Sayed, South African-born software artist Floor van de Velde, and Syrian designer and founder of alternative education platform NuVu Saeed Arida (etcetera… the list could continue for several paragraphs). 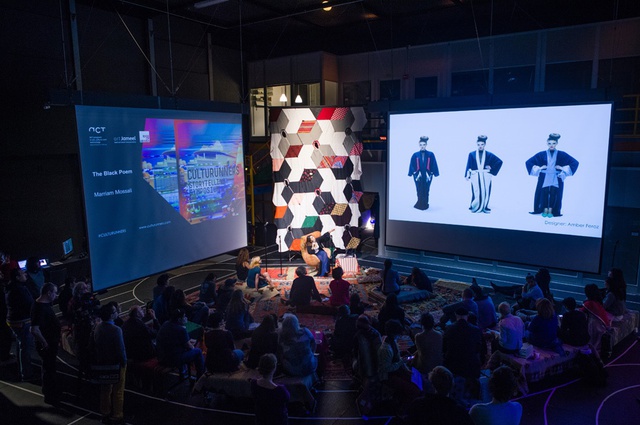 The five-day meeting culminated in a Sunday symposium that was open to the public, conceived as a Majlis ('sitting' or 'council' in Arabic). Taking the form of a storytelling marathon, contributors related how their own experiences support and intersect with Culturunners' concerns. Among them, Harvard Professor of the Indo-Muslim and Islamic Religion and Cultures Ali Asani explained how he uses artworks in his teaching to convey the role the arts play in the experiencing of that religion, and Curator of Contemporary Art at the Freer Gallery of Art and Arthur M. Sackler Gallery Carol Huh discussed the value of live art in an institutional context, and how its digital streaming can intersect with more traditional methods of archiving.

What transpired at MIT offered an indication of how Culturunners will play out: experts in different fields brainstormed in the name of artistic innovation before performing a decidedly unprofessional ritual outside the parked RV in order to test how the wearable tech prototypes could be used, and to attract questioning from passers by. By fluctuating between the seriousness lent by the participation of established practitioners and institutions and a playful attitude of artistic experimentation, the project proposes a test in how the slow-moving worlds of academia and 'the museum' might interact in a reciprocal way with the communicative possibilities offered by ad hoc encounters outside a static gallery format. An artistic project aimed at promoting intercultural understanding may initially sound trite, but the hybrid form that Culturunners is taking has the potential to make it a platform positioned to dodge didacticism and predictability.

Culturunners is part of Edge of Arabia's three year tour across the US, in partnership with Art Jameel, and will continue a rolling programme across the USA until 2017. The site will evolve to include an interactive map that exhibits objects exchanged at different destinations and live streams from the RV as it travels. www.culturunners.com. http://edgeofarabia.com/featured_exhibitions/edge-of-arabia-us-tour.

Kasia Maciejowska is a London-based writer and editor who spent a year editing Beirut-based style and culture magazine Selections and its supplement the Art Paper. She has an MA in Design History & Material Culture from the Royal College of Art / V&A Museum, and a BA in English Literature from the University of Oxford. Her regular subjects are the visual arts, fashion, design, and contemporary culture. She has previously written for The Times, Disegno Daily, and Wallpaper.com, among others.