Some Other Way, Somewhere Else...

'More than ever anxious to grasp the complexity of the world around him, today's artist is the one that follows suit in society, the one that accompanies, dissects or decrypts it and at the same time offers alternatives, often critical ones that allow to think differently about reality.' [1] This vision offers a fundamental question: how can artistic activities be used as a tool for social connection? Dream City[2], which recently completed its fifth edition (from November 4th to 8th 2015), is an multidisciplinary and interactive artistic initiative established in 2007 to generate social interaction. The project questions the evolution of Tunisian society, the societal and urban issues of the city of Tunis, as well as the boundaries between artists and citizens. This year, the event was located in the southern suburb of the Medina, a little-known neighborhood that tells the story of the place but also of its inhabitants[3] With artistic interventions set in various mansions of this neighborhood, artists, citizens and participants participated in a debate about the future use of space in the area. 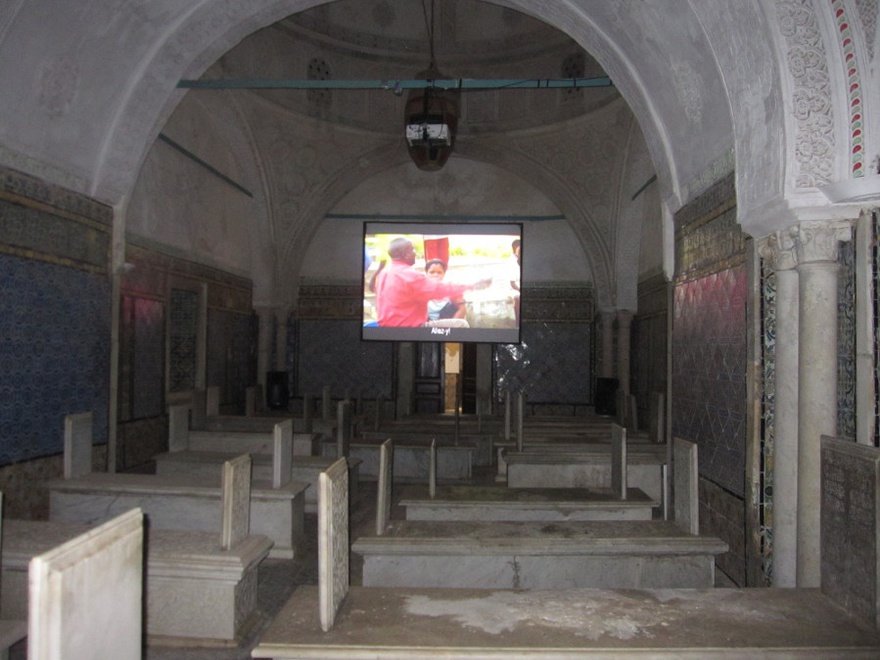 The tactics used throughout the event – in performances, talks, and installed works – recalled a point made by artist Mustapha Benfodil, that 'Writing is resisting'.[5] Performances were poetic, political, provocative, and intimate, many questioning the role of the State, its authority, and criticizing censorship. La Grande Maison by Leila Soleimen & Ruud Gilens, dealt with prostitution with extreme sensitivity through oral narratives; questioning the ambivalent relationship between authority and individuals, between consent and the prostitute's forced circumstances, and makes us reflect on the precariousness of social class. Similarly, Les hommes de Sabra by Souad Ben Slimen & Jean-Paul Delore was a deeply moving theatrical performance, in which actors took audience members literally by the hand to visit a mysterious mansion, navigating between different narratives and subjects that allude to state power along the way. Other aspects of the programme dealt thematically with precariousness and poverty experienced by marginalized social groups. Renzo Martens' Enjoy Poverty offered a critical, ironic, disturbing reflection on the different discourses on Africa and poverty, which Martens posits as a resource; the same as gold or coffee.

Given the varied ways in which space was considered through the artistic programme, not only did Dream City offer a space to actively think about how art might transform public space – a space that has long been colonized by politics.[4] In the case of artist Sonia Kallel, the idea was to transcend space completely, and instead explore the relations over time that produce industrious traditions. 'The artist's mission is not to really about resolving social and economic conflicts that underpin society. However, it is to allow to the world to see reality differently.'[6] As part of Dream City, Kallel presented De fil en aiguille, which explores fez making.[7] Kallel visits manufacturing sites, visiting knitters, seamstresses, fullers, carders, dyers, and so on; a quasi-secret inseparable chain that possesses an extraordinary expertise, transmitted from generation to generation, threatened with extinction in the current precarious economic situation. Rather than with the analytical eye of a researcher, she offers a semiotic approach in the sense that she creates an aesthetic vocabulary specific to the trade. She uses code phrases borrowed from lexical fields fit for the purposes of masters-manufacturers. She plays with words, diverting them to the benefit of the creation of a new simplified typography that she calls 'nouchène writing'. Apart from the idea of creating a brand through the labels she invents, she exposes the subtlety of her tribute to these masters-manufacturers. She thus creates 'nichènes' (distinctive marks that indicate belonging and that look like crowns) to glorify this trade.

Of course, the involvement of art in the social field in Tunisa and elsewhere is not new. However, Dream City's actively interprets this involvement on many levels within and around the Medina of Tunis, which is here framed as an urban laboratory. The site presents a challenge of a special dimension to Dream City, which involves different historic sites of the Medina: Tunis Museum, Khereiddine Palace, Tourbet el Bey (Tunisian mausoleum), the National Museum of the state apparatus security (2015 edition). These are powerful symbols of the city of Tunis' history and heritage – breeding grounds for many artistic interventions. Not only does engaging with these historical sites raise the issue of public access, but it also turns these abandoned spaces into gathering places. Understood as a conceptual way of thinking about the city, the appropriation of the Medina's vacant spaces allows Dream City offers a site of interaction between art and artists, but also allows the involvement of the city's residents within art's participatory process. The festival nurtures Tunis's social fabric while highlighting the paradoxes of urban space, which stimulates multiple and improvised uses.

[2] Dream City is an initiative of two Tunisian artists, dancers and choreographers Salma and Sofiène Ouissi.

[3] "If the existence of the north and south suburbs of the medina has been attested since the 12th century, the south suburb has experienced a considerable development during the 13th century, due to its proximity with the Kasba (...). The southern suburb has traditionally had an important commercial function whose traces remain through the current toponymy, urban configuration and commercial organization. The suburb is an exchange area for the rural hinterland who come to sell their products. They find accommodation in the many fondouks from that era that remain in the district as examples. "In. Catalog Dream City. (2015). p.19.

[6] Extract from my interview with Sonia Kallel.

[7] Red Bonnet. It is the product representing the Tunisian national identity.

Wafa Gabsi was born in Tunisia and studied Fine Art in Tunis, before completing her Masters in Cultural studies from the University of Paris1, La Sorbonne. She is currently carrying out doctoral research on contemporary southern Mediterranean artists on the international circuit of art and cultural globalization. She has published writing in a number of journals and publications, including a report on the art scene in Tunisia for the book Moment's Notice: Collected Encounters, published in Berlin and Manila; Case study in Tunisia in REDES; La singularité artistique face au danger de l’apanage identitaire, in collaboration with the National Center for Scientific Research of Paris; and contributed to The Changing Room: Arab Reflections on Praxis and Times.