The tenth edition of the Global Art Forum (GAF), 'The Future Was', was a speculative arena for thinking about the future from different vantage points: past and present, abstract and concrete. Held in the GAF tent located on Fort Island in the commercialised compound of the Madinat Jumeirah, which hosts Art Dubai, the three-day programme of events invited speakers from the worlds of art, academia, the finance industry, architecture and archaeology, to (re)vision the future in a far-reaching programme of talks, presentations, and performances. 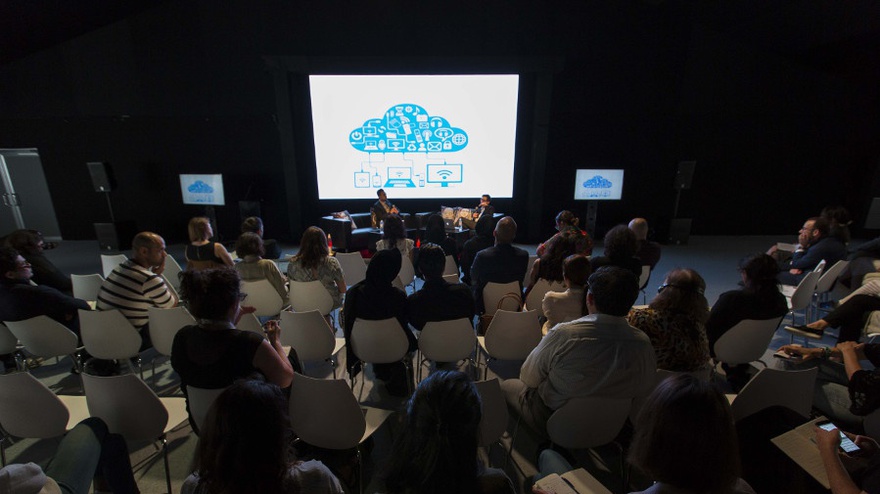 Positioned as the discursive and thinking head of the commercial enterprise of Art Dubai, this year's Global Art Forum, Antonia Carver anchored the discussion in her introductory remarks on the visionary role of Art Dubai and its significant impact on the regional contemporary art scene since its inception in 2007. Yet, while Art Dubai was touted as a platform for showcasing regional art histories, topics including the political instabilities and economic disparities that have led to the de-development of arts infrastructures across the region, remained conspicuously absent from discussions. Similarly, while much was made about Art Dubai's role in repositioning the global perspective of art away from western metropoles, there was little address as to whether this has altered power dynamics within the arts market, or indeed, within arts infrastructures. There was little discussion surrounding Dubai's ascendancy as a regional player in the global arts sphere which would have perhaps rooted the discussion in a more critical present, so as to ask a crucial question: In whose vision is the future imagined, by what means has this been enabled, and how has political and economic leverage legitimized certain futures at the expense of others?

Despite co-director Uzma Z. Rizvi's introductory remarks that the future serves as a critical paradigm to 'decolonize imaginations' by re-considering futures from different localities and vantage points, the ivory tower of commercialism was arguably an incongruous setting for 'The Future Was'. If, as Nicole Denby has argued in her essay on Art Dubai, 'the globalization of the visual arts as mediated by the market is not free from neocolonialist dynamics'[1], there seemed to be little engagement with how market-logic is re-shaping, or in some instances, eclipsing alternative art infrastructures. This was indirectly tackled in the first panel, 'The Future was Past', which featured a predominately all-European panel: Germano Celant of the Fondazione Prada, artist Francesco Vezzoli, moderated by Hans Ulrich Obrist and Shumon Basar, Commissioner of this year's GAF. In the discussion, Celant argued that in today's cultural milieu, the mega-museum can no longer serve as the model for showcasing art, advocating instead that art should be embedded within the totality of the space, in smaller-scale, experimental environments. Whilst Celant's statement cut against the hyper-global trend for museum building and the imported cultural-brand model characterizing arts development across the Gulf and elsewhere in the region, his provocation failed to push the discussion in any meaningful direction. This was heightened by the absence of a critical steer guiding the first panel conversation of the programme, which meant the conversation was heavily focused on the European context, rather than an engagement with other regional contexts where the gallery is not necessarily the dominant model for showcasing art. 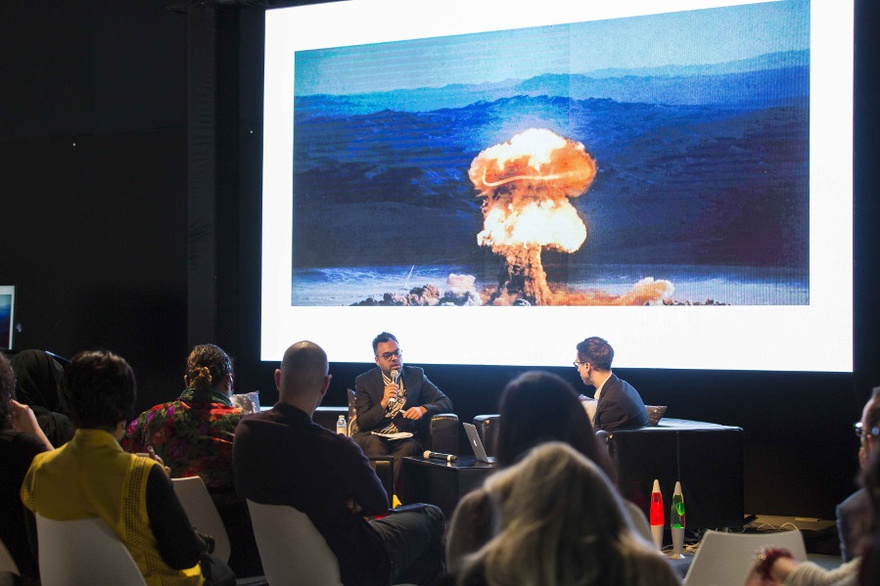 Did the spectre of sponsorship, and the affiliation with a commercial, globalized art fair, mute the possibility of pushing the neoliberal critique of the arts industry? Indeed, did the context block the chance to really question the unequal power dynamics and racialized labour hierarchies that has enabled the global arts infrastructures to emerge within the Gulf? By extension of this logic, the politics of engaging with cultural destructions (neoliberal and militarized) occurring across the region, may have been misplaced in a commercialised setting, and at times even appeared hypocritical. Even if the forum's co-director, Amal Khalaf, noted the importance of engaging with the socio-political dimension of art-making, while keeping in mind the fact that the future has been determined by the elite few, or in Khalaf's words, those who have not 'lived the struggle', panels that did engage more directly with 'underdeveloped' regional contexts jarred with the context, and the lack of reflexivity in relation to it. Take the showcasing of El Seed's Perception, a large-scale calligraffiti painted across several buildings of the Manshiyat Nasr (a neighbourhood in Cairo where the community in charge of collecting garbage from across the city and recycling). Presenting Perception in a context so opposed to the site where the intervention was staged, only served to exemplify the skewed value-economy of the art world, which again pointed to the lack of critical steering during proceedings. Here, socially-engaged art is turned into a commodity for art world spectatorship.

Talks that focused on science-fictive futures were more successful in engaging with the politics of thinking about the future. In the audio-visual performance by speculative architect Liam Young, a satirical depiction of the smart-city set sometime in the future, shatters the illusion of a technologically utopic world to reveal the same Western privilege and racial biases carried over from today's world in a world that is apparently emerging to counter such biases. These cognitive entrapments that are deeply embedded in various worldviews, was also tackled in the charismatic talk given by Adrienne Maree Brown, who spoke of the potential to move towards a decolonial model for the future through co-creating 'visionary fictions'. Yet in positioning the pursuit of justice and freedom as a form of 'pleasure activism', the sentiment of making political engagement 'irresistible', risked mirroring the logic of commodification in which the revolution becomes a product to be packaged and sold; a perpetuation, rather than a radical dismantling, of neoliberal logic. Despite addressing issues of race, social justice, liberation and activism, the confines of the scenically staged 'micro-landscape[2] of Art Dubai meant that even in this talk, the future was bound by the limitation of context. 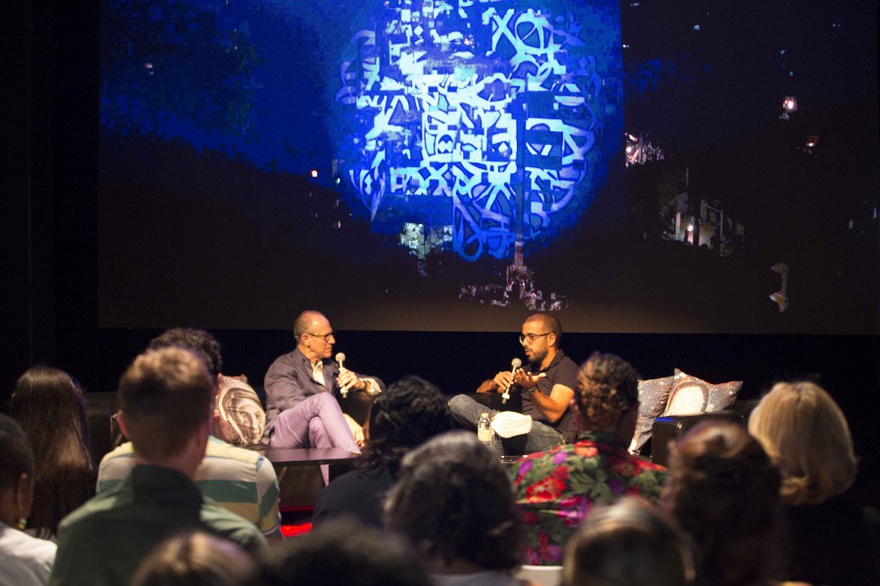 In the end, and despite the best intentions, the speculative framework of GAF 10 failed to move discussion beyond mere curiosity. Cumulatively, the forum amounted to a mesh of intellectual musings and abstract propositions, rather than a platform for critical engagement. Though the forum's magazine-style mixed format meant the quick-turnover of panels kept the conversations and performances engagingly short, it offered no opportunity for audiences to ask questions after the opening discussion, which effectively presented a lost opportunity to engage with the political economy of culture shaping the region. Instead, the future was abstracted and reduced to algorithmic configurations and metrological metaphors: it became a desert; a cloud; overcast; dichroic; past; other-worldly and unpredictable. On occasion, the conversations erred towards intellectual trickery, and experimental programming was favoured over engaged discussion and interaction between panellists and audience members. In these abstractions, the future became nothing more than a reflection of the nebulous concept of the future itself, which – though entertaining and engaging – flattened meaningful engagement to think about what lies ahead from the solid foundations of specific historical and territorial contexts. Perhaps it would have been different had there been a more considered engagement with the 'now' rather than the near 'new'. As the flashing advertisement images of Dubai's real estate towers, competitive skylines, and monumental landmarks were projected on screens surrounding the stage – a reminder of how the future was imagined, and now realised – it felt as if the Gulf-model of economic development was an endorsement of how the future will continue to develop.