Where do we go from here? Women in Contemporary Arab Art

In conjunction with artist Sama Alshaibi's public speaking tour of the UAE, supported by the US Embassy to the UAE as part of its cultural diplomacy initiatives, and in partnership with Traffic, the latter a non-commercial arts and creative hub in Dubai, I was invited to moderate the panel 'Where do we go from here? Women in Contemporary Arab Art'. 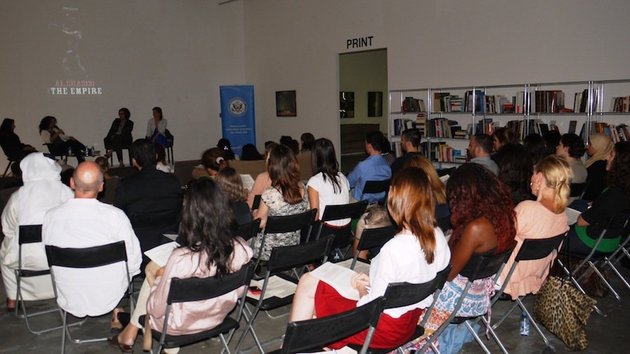 The subject of women in Arab art is one that curator and art historian Dr. Salwa Mikdadi addressed in the early 1990s in her curatorial work. Mikdadi expressed the view that the subject of addressing both the literal representation of women in Arab art and the larger representation of Arab women in the artistic field was 'a closed chapter'. Mikdadi focused her discussion on the larger historical representation of Arab women in visual culture by male and female modern and contemporary Arab artists, through European orientalist imagery, and within institutional contexts in the wider public image and visual culture. It was interesting to note the contrast that emerged in her presentation between the empowering, humanistic representation of Arab women by both Arab male and female modern artists and the more sexualised, neo-orientalist representations that many contemporary Arab male and female artists tend to veer towards. It was also interesting to note the tendency to foreground the 'veil' and 'orientalist/Arab' mystique within western institutional contexts. Mikdadi shared more than a dozen titles of exhibitions from the west during less than a one-year period in 2008, nearly all of which directly referenced these tropes. 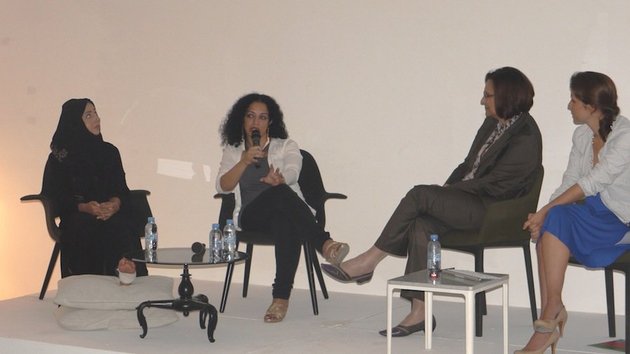 Sama Alshaibi and Maisoon Al Saleh both spoke about their practices, with Alshaibi more directly connecting hers to the panel's theme. Her work, which often uses a female protagonist, explores a number of ideas, including gender and gender relations from both a female and male perspective. The labeling that the larger art world imposes, whether 'contemporary Arab art' or 'contemporary female Arab artist', is one that Alshaibi feels is a double-edged sword: whilst giving opportunities for exhibiting, the label can at times also limit the contexts of exposure that Arab women artists enjoy, especially when they aim to be exhibited and viewed first and foremost as artists. Al Saleh, meanwhile, highlighted her body of work, which includes representations of Emirati women as skeletons in female national dress, the 'abaya', while adding a graduation cap and gown to images of women in local attire partaking in more traditional cultural activities, such as serving Arabic coffee.

Though interesting, the discussion between panelists and moderator ended – perhaps predictably – without reaching a trailblazing climax or Eureka moment, leading one to wonder if perhaps the subject is indeed a closed chapter as Mikdadi suggested – or whether it needs to be addressed within a longer, more holistic format, such as a conference.

Isabella Ellaheh Hughes is an independent curator and critic based between Dubai and Honolulu. She has curated exhibitions for a variety of museums and non-profit organizations in the US and UAE and is also a frequent public speaker on subjects pertaining to cultural diplomacy, the Middle Eastern art scene and contemporary art. Serving as the Dubai Editor for ArtAsiaPacific, she has also contributed to Frieze, Persianesque, Contemporary Practices and Brownbook. Specializing in contemporary art with an academic interest in the rise of transculture and focus on art from the Middle East, Asia and the Pacific, Hughes has a BA in Art History from Boston University and an MA in Museum Studies from Johns Hopkins University.