The Art Of Dialogue

There has been, according to the Egyptian philantropist and investor, Shafiq Gabr, a gradual erosion in understanding between the so-called 'East' and the 'West' that has resulted in a series of dangerous caricatures ossifying into facts. To counter, or at least foster a better level of understanding, and thus ameliorate these caricatures, in part at least, Gabr has given over his Foundation to what has been seen by many to be a ground-breaking initiative, namely, East-West: The Art Of Dialogue, launched with panel discussions at the Dorchester Hotel on 15th November 2012. 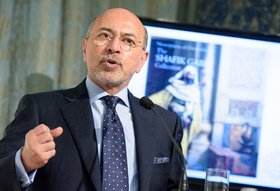 'As gaps in understanding between East and West open up at many levels', Gabr argued in his opening remarks, 'there is a need for significant bridge-building and new platforms for people-to-people communication perhaps more than at any other time in modern history.'

The East-West initiative could not be more timely. Throughout present-day media, political, social and cultural discourses, the Middle East is still 'understood' through phrases that have barely changed since the early part of the 20th century: conflict, extremism, and a propensity towards intransigence - all these terms still litter dialogue today. For Gabr, these discourses represent an increasingly dangerous set of references, which have real consequences in terms of development across the region and relations beyond the region.

Gabr's speech continued to underline the importance of dialogue to the development of international relations beyond the political realm. Looking to culture and the sciences as a means to address shortcomings in understanding, he explained that the initiative aims to focus on exchanges between the arts, business, government and non-profit sectors. Fellows of the initiative will spend time in Washington and Cairo engaging in discussions, seminars and site visits in order to better comprehend both cultures and to foster long-lasting relationships. This may seem idealistic to begin with, but, as panelists for the inaugural event unanimously agreed, there is an urgent need to start somewhere. 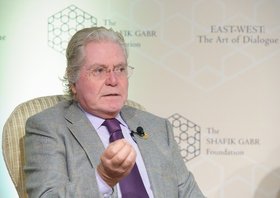 This speech was followed by an opening conversation between Gabr and Tony Blair, moderated by Nik Gowing. Blair has given his full support to the project advocating cultural exchanges between the Middle East and the western world so as to create a more credible framework for negotiation to take place. In answer to the question: 'How do you generate contact between the two worlds?' he argued for more open societies and economies. Moreover, Blair praised the reform agenda set out by Jordan's King Abdullah and insisted that a solution to the conflict in Palestine must be reached before the window of opportunity closes.

The first panel of the day took as its starting point, somewhat counter-intuitively, the work of Orientalist artists working in the region in the latter part of the 19th century. The panel included Briony Llewellyn, a leading specialist in Orientalism, Sotheby's Lord Poltimore (who spoke eloquently on a number of images), the Egyptian actor Hussein Fahmy (who was appointed the first Regional Goodwill Ambassador for the Middle East in 1998 by the United Nations Development Programme), Wendy Goldsmith (of Goldsmith Art Advisory, who offered a market perspective on the interest for work by Middle Eastern artists in recent years) and Dr Anthony Downey, who highlighted the level of support to be had between cultural practices and the development of civil society across the region, the latter conspicuous in its absence. 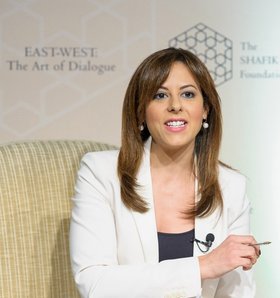 The second panel, titled 'Beyond Government Diplomacy', focused on cultural bridge building, with panellists advocating new types of dialogue. Former UK ambassador to Israel and Saudi Arabia, Sir Sherard Cowper Coles, blamed the American government for pursuing their own interests in the region rather than facilitating dialogue. According to Cowper, the UK and UN have failed to affect change. Providing a media perspective was Carina Kamel, a senior correspondent for Al-Arabiya TV, who praised the advent of social media in the Middle East, which, she argued, has facilitated unmediated communication between users in the Arab world and the western world.

In contrast, Saudi Arabian businessman Hussein Shobokshi dismissed social media as, 'a lot of clutter and noise.' Instead, he spoke about the power of Arab film, literature and art to examine and rectify the shortcomings of the region. Importantly, he condemned the double standards applied to the Middle East from external onlookers that hamper real dialogue and exchange. Nevertheless, Shobokshi ended the morning of discussions on a positive note. He said: 'What was a fantasy yesterday will become a very beautiful reality for the Middle East tomorrow.'

Gabr's initiative has attracted a considerable amount of interest and goodwill across the region and beyond. Since the inaugural event, two more have been staged in New York and Washington, both bringing informed audiences together to discuss the issues in hand. Much work, Mr Gabr has noted, has yet to be done but these events mark, for all concerned, a positive and auspicious beginning.

For full details of the panels and the initiative, see http://eastwestdialogue.org/events?id=1

Ibraaz will publish a full interview with Mr Shafik Gabr in March where we will explore the progress of the initiative to date.