10 Years On: Art and Everyday Life in Iraq and Iran

Ibraaz in partnership with Winchester Centre for Global Futures in Art

In partnership with Winchester Centre for Global Futures in Art, Design and Media, Ibraaz hosted a two-day conference (7th-8th June 2013) '10 Years On: Art and Everyday Life in Iraq and Iran' exploring civil society, art practices, culture and everyday life in Iraq and Iran 10 years after the US-lead invasion of Iraq. Artists, academics and media professionals gathered at London's The Mosaic Rooms for stimulating discussions on pertinent contemporary issues.

The conference was opened with a paper by Rijin Sahakian, founder of Sada, an organisation for contemporary art in Iraq. Sahakian spoke of the large-scale government funded art events that take place in Baghdad whilst little is done to rehabilitate art schools and to provide facilities for artists. Sada was established to fill this void by sustained efforts to regenerate the art scene in Baghdad and beyond.

Whilst leaving Iraq is constantly at the forefront of the minds of many Iraqi artists, Sada works to match the commitment of local artists by providing infrastructure and support. In a film shown by Sahakian to accompany her paper, young Iraqi artists are seen talking about the difficulties of practicing under current political circumstances with some undergoing torture for the sake of their art.

Daniel McLean and Noor Kadhin of 'In The Frame' spoke next on art law and lost heritage in Iraq. With thousands of artefacts looted from Iraq's museums since the invasion of 2003, questions about repatriation and responsibility still remain unanswered. Kadhim and Mclean said that most of this stolen cultural property is in America, whilst some has been sold at auction despite the items being listed as missing or stolen. They argued that the Iraqi government needed to take responsibility for locating and repatriating artefacts important to both Iraqi and international heritage and scholarship.

Shirely Elghanian was the next speaker of the morning to present a paper about the work of Magic Of Persia, a UK based charity nurturing and developing contemporary Iranian art practices. As with Sada, Magic of Persia aims to make up for the deficiency of funding and facilities available for artists in Iran but its work extends to Iranian artists in the diaspora. 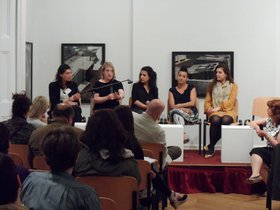 From the grassroots to the academic, Kathy Battista, programme director of Sotheby's Institute of Art in New York presented a paper drawing parallels between the male dominance of art history and the male instigation of armed conflict. Battista illustrated her theories with works by such artists as Martha Rosler, Mariam Ghani and Harum Farouki. This was followed by a presentation by SOAS doctoral candidate Siba Aldabbagh, whose research looks at the intersections and overlaps between contemporary Iraqi and art and pre-modern literature.

The first day of the conference ended with a lecture-performance by Slavs and Tatars, entitled 79.89.09. This was followed by a launch party for the artistic collective's new publication Friendship of Nations: Polish-Shi'ite Showbiz.

Shireen Walton's paper on the second day of the conference brought the issues of everyday culture in Iran to the fore in her exploration of the phenomenon of photo-blogging and media related practices. Daria Kirsanova similarly spoke about the revolution and dissensus amongst Iranian artists, whilst Iraqi artist Adel Abidin shed some light on his own practice after leaving Iraq in the early 2000s.

Introduced by Ibraaz editor Anthony Downey, New York-based Iraqi artist Wafaa Bilal delivered a keynote speech about his interventionist and media-based work since the invasion of his native country. Bilal stressed the important of the corporeal in his practice as demonstrated in works such as Domestic Tension (2007) in which the he volunteered to be shot with 65,000 paint balls over the course of a month and And Counting… (2010), which saw the artist tattoo a dot in UV ink for every one of the 150,000+ killed in Iraq since 2003. Referring to his video game piece Virtual Jihadi (2008) Bilal noted the importance of being within a discourse in order to critique it, to use the images of racial stereotypes in order to reverse them. In conversation with Anthony Downey, Wafaa Bilal discussed the future of his practice and answered questions form the audience. 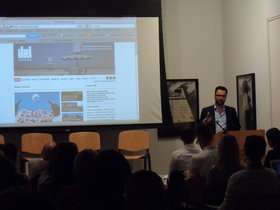 Following this conversation, a panel chaired by Downey explored the notion of looking forward within the context of Iraqi artistic practices with Rijin Sahakian, artists Wafaa Bilal, Adel Abidin and Janane Al-Ani and Anna Bowman of ArtRole, a grassroots organisation supporting arts in the Middle East. Each panellist gave a short presentation and subsequently discussed the future of arts infrastructure in Iraq and Iran and what role institutions could play in the two countries.

'10 Years On: Art and Everyday Life in Iraq and Iran' aimed to examine the politics and economics of representation in the aftermath of bloody and protracted Western intervention, and indeed, much was expressed and discussed about the nature of cultural production in the region today. A well-balanced range of speakers from the arts and scholarship provided some interesting answers and posed questions of importance to continue the relevant discussion.