A Report on Future City

How can we define the notion of 'public space' and its utility in the civic and urban contexts today? At the recent 2013 'Future City' conference, such questions were explored in a two-day programme of discussion and expeditions that took place in Liverpool in September 2013. A collaborative project between the Liverpool Biennial and Mathaf: Arab Museum of Modern Art (Mathaf) in association with Tate Liverpool and Liverpool John Moores University, 'Future City' brought together international thinkers and practitioners in the arts, urban development, architectural and visual culture fields to share ideas and visions for future cities. 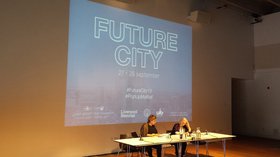 This article shall focus in particular on the opening dialogue at Future City between Irit Rogoff and Saskia Sassen, academics at Goldsmiths (University of London) and Columbia University respectively. Their talks collectively raised two pertinent questions in relation to 'public space'. First, how might we demarcate it, if the term 'public' is itself not easily defined? Second, and more importantly, what are we expected to do with public space'?

Four concepts may be extrapolated from Sassen and Rogoff's discourse, which will be addressed below in sequence:

1: The traditional, or 'eighteenth century', concept of the 'public sphere' no longer exists.

2: The nature of 'public spaces' differ according to whether we are dealing with a civic square or building, a street, or even virtual space (the internet).

3: The concept of 'shared belonging' , as opposed to that of a citizenship drawn along nationalistic lines, has gradually evolved.

4. As inhabitants of a constantly transforming urban environment, we must be permitted to make as well as 'unmake' our 'public spaces'.

Concept #1: A universal 'public sphere' does not exist. 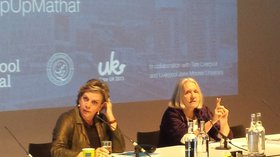 The problem with attempting to define 'public space' resides in the assumption that universal consensus exists on the definition of 'public'. The very notion of 'public' is fluid. 'Where are our frontiers?' Sassen asked during her presentation. 'They are inside our city. The frontier space is the zone where actors from different places have encounters, and where there are no rules. They are often marked by social economic struggles. If cities are too neat, there will be no frontiers.'

Sassen added that it was the city's lack of definition and its ability continually to reinvent itself that lends to it the important and concurrent possibilities of 'creation' and of 'uncreation', whether of tangible structures such as buildings, or of the body politic and the economy. In this respect, Sassen referred to the 'Occupy' movements and the notion of 'recovering the work of unmaking our citizenship'. The protest movements, she explained, represented a point in a trajectory – a journey in the creation of the social. Such movements are a manifestation of globalisation and a 'work of citizenship' that represented a shift from the idea of people being the 'subjects' of a dominion to becoming 'stakeholders'. This was a focal point that Rogoff later expanded upon in her own lecture.

(i) A city is a complex system, the frontiers of which, paradoxically, depend on its state of incompleteness. The city transcends hierarchies and centralised governments. If a city is complete, it can have no frontiers.

(ii) The richness of a city lies in its indeterminacy. If a city is too fixed and does not have frontiers, we lose the vital capacity of 'making'.

A significant consequence of the incompleteness and indeterminacy of the city requires that we interact with its spaces in order to understand and know it better. Returning to her idea of 'making the social', Sassen reminded us that in fact, it is the homeless person in any city who knows it better than most of its residents, urban planners, engineers or other so-called experts. The homeless person is the most attuned to the gaps between, the fluidity of the everyday changing fabric of the indeterminate urban environment, the sprawling metropolis that Sassen has described.

Concept #2. The different natures of the street, the piazza, and the digital sphere 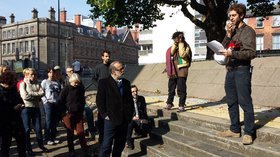 The philosophy of the above arguments should not be divorced from the matter of form. The question of 'public space', according to both Sassen and Rogoff, depended also upon its structure. 'The piazza is very different from the street', Sassen emphasized. 'The protest movements mentioned took place in the streets, which are a lot more indeterminate than squares. The piazza has an embedded code, where people know how they should conduct themselves. The streets are a different kind of public space.'

However, defined space was by its nature limitative, for Sassen, be it a street or a piazza. For its fullest potency, the Future City may need to move into the digital sphere, where the possibilities for democratic indeterminacy were infinite, a new space 'that enables us to "make"'. She asked, 'could the digital sphere generate a kind of indeterminacy that operates on digital and knowledge vectors?'

Concept #3: The notion of 'shared belonging'

Irit Rogoff, whose lecture succeeded and complemented that of Sassen, focused on the members of the community, moving on to how they interacted with the spaces they occupied within the city. Speaking of the re-imagining of the 'private and the public' in the wake of social protest, she noted the demise of the traditional concept of 'public space'.

We have, Rogoff argued, moved away from the eighteenth century, where the term 'public' was conceptualised in civic terms, by reference to the welfare of its members. She asked, 'what becomes public, after the demise of the "public space"?' It is the actions of private people who gather and come together. With the revolts such as those during the twenty-first century characterised by the events in Tahrir Square, Sao Paolo, Santa Maria Maggiore, Wall Street and many others, the world is experiencing a crisis, where 'citizenship' is being divorced from the national franchise. 'We live amongst citizens without citizenship', she said.

It followed that the communities of today are indifferent to the notion of 'common property'. Citizenship is now an etymological state, representing the shift from 'having in common' to 'being in common'. Rogoff then referred to Jean-Luc Nancy, who theorized it in his book, Being Singular Plural. For Rogoff, a Future City must be comprised of beings in common, whose task is to interact and share. An example was given of the society that was formed on Goldsmiths College, the 'New Cross Commoners', whose philosophy was to make things 'visible' according to Rogoff, to explore the dynamics of shared spaces (such as the art gallery) and shared practices. It is not a question of ideology or identity, Rogoff reminded us, but of 'being together in time and space', of unlocking the potential that the indeterminacy of a city offers not through nationality, creed or background, but by the simple act of sharing space.

In this way, the human element of Rogoff's discussion interacted with Sassen's abstract urbanism, making it a kind of joint exploration, of the evolving concepts of social identity and 'shared belonging'. It was a discussion in which one could be sure of one thing: that the parameters of 'public space' were consequently changing. But as Richard Sennett, himself an advocate of the 'public sphere', declared, the 'most important fact about the public realm is what happens in it'. This leads to Rogoff and Sassen's next important proposition, and what could be posited as the crux of the discussion surrounding the notion of public space as discussed by Sassen and Rogoff at Future City.

Concept #4. The process of making and unmaking 'public space'

To regenerate or redevelop the so-called 'public spaces' of a city, we need to understand the ungraspable spaces in between. To do that, we need to walk the streets, imbibe its culture, try to interact with its residents, its men of state and its sans-papiers alike.

The importance of going backwards as well as forwards, for Sassen, stemmed from her view that one of the major threats of society today was the over-determinacy of the urban space.

We may not find an immediate answer as to how to go about remedying this situation. Nevertheless, it is instructive to bear in mind Sassen's concluding remarks. 'We have become 'consumers of our citizenship, of our rights', she said. 'We need spaces to make, and if necessary the liberty to unmake, our rights'. 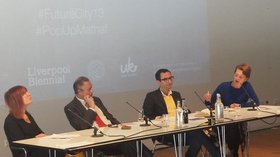 The Future City lectures were instructive, save that most of the programme's content (except for Nasser Rabat's lecture) was either unconnected to or quite irrelevant to Qatar or the cultural infrastructure of the Middle East. This was a pity, because the pop-up should have explored a real collaboration between Qatar and the UK, to 'generate dialogue and knowledge around shared questions'. However, the lectures were still insightful, and throughout the conference the audience seemed to be encouraged to invert received stale or traditional methods of thinking, turning them inside out. Both Rabat and Sassen highlighted the importance of 'unmaking', with Sassen warning against the super-definition of the urban space, and Nasser emphasising the need for a 'better commitment to social justice'. Werner Hofer declared that 'nation states won't survive in future, but regions will', leading to the unuttered conclusion that we must devote more energy to the natural inclinations of our environment than to the grand plans of those who temporarily reign over it.

Claire McColgan reminded us that important institutions cannot be built without an appreciation of context and culture. And what of the role of the institutions themselves, from the inside out? Harking back to Rogoff's 'New Cross Commoners' and the idea that shared spaces such as galleries could be explored for their social benefits, Francesco Manacorda, Director of Tate Liverpool, stressed the importance of the 'ethical role' that museums could indeed play in this arena. His utopian ambition for Tate was to 'turn the museum into a space for the co-production, rather than a production, of knowledge.' There should, according to Manacorda, be a civic element to the museum, which belongs to the UK people. Here, Manacorda's conclusion relates in general to the Future City lectures and discussions in that we go back to indeterminacy, to turning institutions and spaces into places where private individuals gather in a state of 'shared belonging'. We return to the streets that are constantly changing and the necessity today to revisit and unmake in order to move closer towards a working concept of a Future City.

Noor Kadhim is an English-qualified lawyer of Iraqi origin living in London, specialized in the fields of dispute resolution and art law. She speaks Arabic, English, and French fluently and has experience working in the UK, France and the UAE. Noor also founded INtheFRAME (www.intheframe.org), a curatorial platform for Iraqi and Middle Eastern art, under whose auspices she curates exhibitions, and writes and edits articles and texts on Middle Eastern contemporary art.