Over two days in early January, through four keynote lectures, six panel discussions, a performance, a film screening and numerous coffee breaks, the first Art & Patronage Summit aimed to inspire a commitment through knowledge to benefit artists and develop and support arts institutions in the Middle East. Opening the first day at the British Museum in London, Art & Patronage Director and Founder and self-proclaimed troublemaker Hossein Amirsadeghi called for creative thinking and straight talking, and declared that if you bring enough dedicated people together, great change can be achieved in a short period of time. Looking at institutions, funding models, collections, education, risk and power, the Summit instigated debate and consistently drew attention to the numerous elephants filling the room. 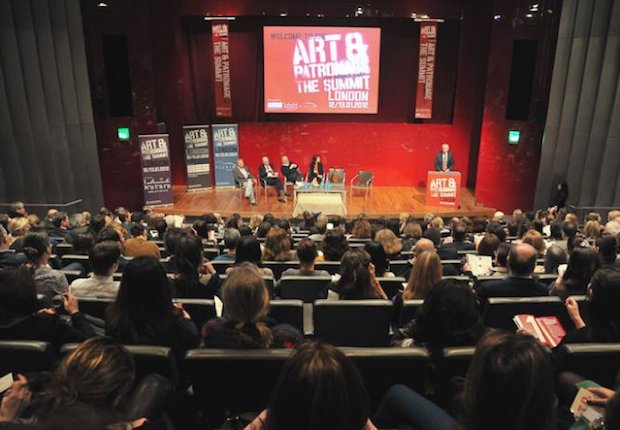 Tate Modern Director Chris Dercon initiated the first panel, entitled ‘Institution-Building: New perspectives, common practices, future goals,’ and opened up a discussion around the importance of small institutions and soft power. As the panel discussion began, Mona Khazindar spoke about the Institut du Monde Arabe and Richard Koshalek discussed LA MOCA’s Temporary Contemporary. But it was William Wells, Director of the Townhouse Gallery in Cairo who, in his critical discussion of institutions, spoke of his wariness of being perceived as an institution and of the dangers of stagnation and nepotism entailed therein, and thereafter seemed to draw the most support from the room.

Reem Fadda, Associate Curator of the Guggenheim Abu Dhabi, introduced the second panel of the day on the subject of ‘Collections and Collecting: How to make a difference, big or small.’ She described her exhaustion at the continual erasures of history across the region and of the constant need to accumulate knowledge and build archives. Martin Roth, Director of the Victoria & Albert Museum discussed the Jameel Gallery and its collections of Islamic Art, and emphasised the importance of collaboration through knowledge production. Interspersed with a video message sent from artist Shirin Neshat, Stephen Deuchar from the Art Fund, Sam Bardaouil of Art Reorientated, Olga Davidson of ILEX Foundation and patron and collector Shafik Gabr discussed their disparate approaches and experiences of building public and private collections. But what everyone really wanted to know, and what was identified as the first elephant in the room, was the question directed at Fadda: What is happening with the collections of the Guggenheim Abu Dhabi? It was a question that was left unanswered. 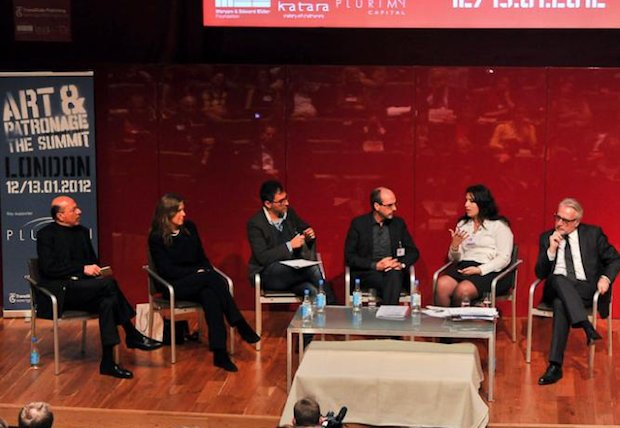 Jude Kelly, Artistic Director of the Southbank Centre, began the second discussion after a break on the subject of ‘Creative Education’ and challenged everyone in the room to ask themselves whether they truly wanted everyone to achieve their potential. With the panel moderated by Shiva Balaghi from Brown University, Moukhtar Kocache set out the parameters of arts education, both formal and informal, for professionals and for amateurs. Yto Barrada discussed her project Cinémathèque de Tanger, and the potential power that patrons hold and often ignore, while Tessa Jackson of Iniva and Bayan Kanoo of Al Riwaq Art Space continued to laud the power of the patron.

After a performance by artist Amir Baradaran, Arif Naqvi, Founder of the Abraaj Capital Art Prize, introduced the final panel of the day on ‘Funding Art and Market Dynamics’ with vigour and optimism, focusing on empowering potential and the power of the artist as entrepreneur. Panel moderator Antonia Carver, Director of Art Dubai, highlighted the fact that artists and gallerists were conspicuously missing from the conversation, before inviting Oussama Rifahi of the Arab Fund for Arts and Culture, Christa Meindersma of the Prince Claus Fund, Andrea Rose of the British Council, and Lisa K. Erf of JPMorgan Chase Art Collection to discuss the necessities and challenges of various funding models.

Day two began with a morning breakfast at Sotheby’s and a screening of Axis of Light by Pia Getty Films at the ICA, before the Programme for Cultural and Curatorial Practitioners was initiated at the Royal College of Art. Organised and introduced by Aaron Cezar, Director of the Delfina Foundation, the audience was informed that bios, performances and keynote speeches, which had dominated the first day of the summit, would be absent from the afternoon’s discussions. Instead this was to be considered a class, and everyone was expected to have done their homework in advance. The two-part discussion was structured around critical reflections from a macro and micro perspective and was followed by a panel discussion.

The first part of the afternoon’s discussions focused on ‘Cultural Risk-Taking: How it looks on the Ground,’ which was argued at the macro perspective by Beirut-based writer and critic Kaelen Wilson-Goldie. She looked at the great disparities of the region, arguing that one cannot talk about risk blindly and that the area under discussion both benefits and suffers from regionalism. Of the many potential risks across the region, Wilson-Goldie singled out censorship, conflict, getting caught up in bureaucracy, and the very real and frightening risk of assassination. Taking the micro perspective was Rijin Sahakian of Sada [Echo] in Iraq, who spoke about the day-to-day risks of being a young contemporary artist in Iraq. Artists, she said, risk their lives on a daily basis but the greatest risk they face is that of doing nothing. 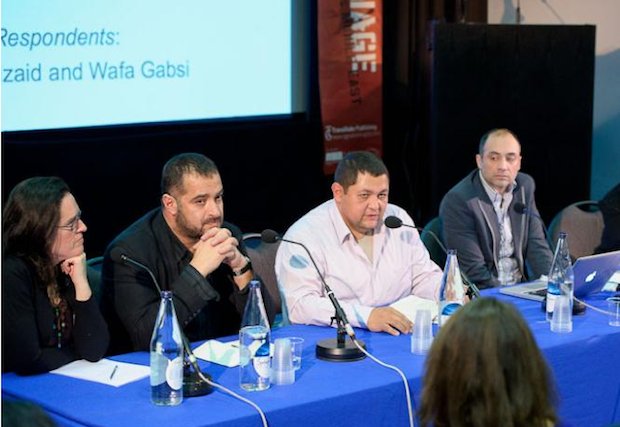 Moderator Bassam el Baroni began the panel discussion arguing that the very act of living entails risk. Vali Mahlouji spoke about the erasure of history in Tehran, and his own work preserving archives. Khaled Hourani, Director of the International Academy of Art Palestine, spoke of the numerous difficulties involved in making his project Picasso in Palestine – and which El Baroni argued made Picasso relevant again – happen at all. When it comes to risk in the Palestinian territories, Hourani said, there is so little that there is little to lose. Livia Alexander of ArteEast drew attention to the importance of context and framing, while artist Zineb Sedira spoke of the problems of the diasporic community attempting to speak for those who remain at home. But it was El Baroni who argued that one of the greatest risks facing the region is the enforced engagement with identity issues. With the audience now joining in, the risks facing patrons, artists and organisers were heatedly debated, and the question to what extent should one negotiate one’s culture, or embrace it, was raised. 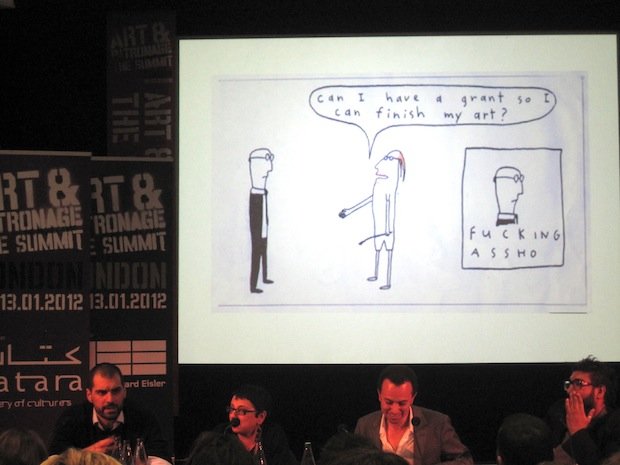 Ibraaz’s Editor Dr. Anthony Downey began the second part of the afternoon’s discussions on ‘Power, Knowledge and Patronage’ by looking at the macro perspective and contested the oft-cited aphorism that knowledge is power, before arguing that patronage of the arts was de facto support for the development of healthy civil societies in the MENA region. Meanwhile, Zeynep Oz took the micro perspective and discussed her space SPOT in Turkey from the ground level. With Omar Berrada of Dar Al-Ma’mûn, Morocco, moderating, Samar Marta of ArtSchool Palestine spoke about the impositions that accompany funding with international organisations, while Banu Cennetoglu, founder of Bas in Turkey, discussed the possibilities of funding small institutions on local, private resources. Haig Aivazian shared a particularly pertinent found doodle demonstrating the potentially difficult relationship between artists and patrons, and discussed some of the curatorial strategies and tangential approaches to 'the political' in the tenth edition of the Sharjah Biennial in 2011, of which he was associate curator. Brooklyn-and Sharjah-based writer, and one of Ibraaz’s Contributing Editors, Murtaza Vali continued to discuss the Sharjah Biennial, focusing on Bombay-based collective CAMP’s Wharfage project for the 2009 biennial, which explored the port in Sharjah as a multicultural trade hub, and raised questions as to what the ‘public’ is, what is the face of the public and where does the power lie.

As Hossein Amirsadeghi turned the discussion to confront the role of Islam in questions of censorship and risk, Vali argued that one of the failures of post-colonial nations is the manner in which it overlooks religion’s role in society. Aivazian argued that ultimately art retains the privilege of not needing to be defined and consequently is able to evade language, something the summit had not, it must be said, been able to do. At this point, the audience began once again to open up, introducing a handful of debates that would require an entirely separate summit to properly address.

In sum, was any difference made? In terms of instant gratification and measurable terms, funding grants were awarded to three institutions as part of the A&P Project Mart. The recipients included Ashkal Alwan’s Home Workspace in Beirut, Townhouse’s Independent Study Program in Cairo, and Sada Portal in Baghdad.

A collection of essays that expand on the themes of the Art & Patronage Summit, alongside commissioned research projects, are scheduled to be published in 2012-14.