The group of paintings is inspired by 'momentary images' or more accurately frozen moments taken from the contemporary cityscape of Egypt, as well as from personal records; old photographs found in family albums. I focus on the structure of buildings, popular culture and elements of the past that still exist in the present. I also see a clear link between the present socio-political conditions in Egypt and remnants of past influences, such as colonialism and the fear of espionage.

The ashwa'iyat buildings depicted in the first image, top left corner, are a visual example of the present real estate developments that are constructed in and around Cairo and Alexandria. Ashwa'iyat is an Egyptian term used to designate the 'random' slum-type buildings that are mainly illegal and hastily built. Especially after the revolution and the fall of the Mubarak regime, there was a proliferation of ashwa'iyat. The once green and fertile agricultural land, covered with beautiful palm trees and rich soil, has now become a rare sight as it is being replaced by skeleton buildings covering vast areas of land, stretching endlessly into the horizon. The ashwa'iyat and other construction developments being carried out on the outskirts of the very dense city centre are urbanizing the desert, rapidly transforming the landscape. The occasional artistic touch of a tenant who has proudly and independently painted and decorated his balcony is a vibrant example of popular culture. The majority of the inhabitants of these new settlements have no legal sources of electricity or water, nor any guarantees that the structures' foundations are solid. The countless ashwa'iyat buildings seen in the city's outskirts are a sign of the ever-growing population.

The second painting from the left top row is a view of the minaret of the Ibn Tulun mosque – the oldest surviving and largest in Cairo – famously known for its exterior staircase (similar to the one from the Mosque of Samarra in Iraq), as seen from the inside of a taxi driving towards old Islamic Cairo. Scenes in some of the streets of Islamic Cairo often reflect the mood of a bygone, historical era. Being driven in a taxi while observing from the window almost feels like being in a time capsule looking at the past from the future.

The top right and centre right paintings are both 'adorned' with golden frames. The colour (gold) is a symbol not only of the precious and timeless metal, but in the prevailing aesthetics of the whole region it is considered a valid substitute to the real metal in terms of symbolizing wealth, prosperity and grandeur. Decorating spaces with gold and/or gold colour as well as other, often kitsch, paraphernalia is an expression and celebration of pride, honour and confirmation of one's existence. One is an image of the monumental statue of the revolutionary Prime Minister Saad Zaghloul at the homonymous square in Alexandria near Raml tram station along the corniche, and the other of a police officer guarding a hotel entrance. The level of security at tourist spots such as hotels and museums was usually high, especially during the Mubarak era. This effort is being re-enhanced with the army also controlling the entire road infrastructure. The issue of security in the region is a top priority and a major concern amongst the neighbouring countries.

The image in the lower left corner is a record of one of the places in which my father lived as a child. A plot of land in Alexandria where once stood a villa (much like the one seen in the back), now torn down. Most of the beautiful but derelict or abandoned villas are being demolished only to be replaced by high-rise buildings that are in great demand. Real estate developments in the region are reshaping the infrastructure and aesthetic character of cities while fuelling economic growth. However, in most cases real estate is seen as a profit-making opportunity, mostly for quantity rather than quality. It is practicality and need above aesthetics that is enhanced most of the time. The characteristics of the cityscape are constantly changing, 'erasing' any records of the past.

The image in the lower right corner is of a bride and groom miniature on top of a wedding cake. I used it to depict popular culture, as a representative element of the regional deep-rooted love for ceremony and symbolism.

Creating this 'visual map' is an attempt to examine the relationship between the past and the present and how this corresponds to human consciousness and the changes that the landscape of Egypt has undergone. Even though I am based in Greece, I chose Egypt as an example of what has been happening in the region during the past decade, as its culture, architecture and landscape are embedded in the universal collective subconscious. 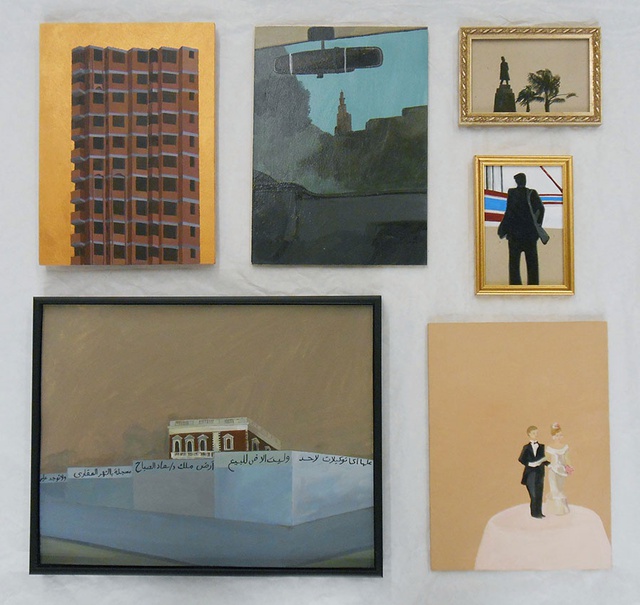 was born in 1975 in Alexandria, Egypt. She is a Greek-Egyptian artist based in Athens. She graduated from Vakalo School of Art & Design, in Athens, and then moved to London where she earned her Bachelor of Arts Hons degree from Kingston University, and her Master of Arts degree from the Royal College of Art. From 2003 to 2007, she was co-founder of the creative team WARDA. Her ongoing relationship with the Middle East is a result of her early years in Alexandria and Kuwait and has been realized more recently through her residencies and research in Cairo and Manama. El Gazzar is represented by Kalfayan Galleries, Athens-Thessaloniki.

Previous response
|
Next response
Response
7
of 9