Ghosts of the Mediterranean Sea 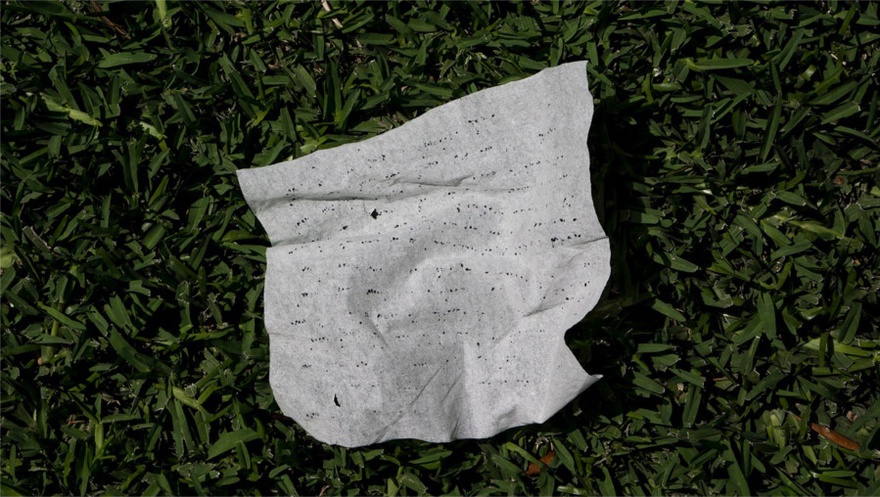 Ghosts of the Mediterranean Sea

Shown as a site-specific installation, and through a process of collecting the bottom layer of letters written by the inhabitants of the village of Ras Masqa on disposable tissue papers, this work aims to change the lifecycle of this medium in its physicality and its image.

How do these collective tissues function now as an object that is not meant to be thrown away anymore and is also being archived digitally?

Here's what I know:

In 1996, the Lebanese government gave Sukleen the permission to open a landfill in Naameh that would receive waste from Beirut and Mount Lebanon. Though it was originally conceived as a temporary solution, no other national waste management plan has been adopted since. As a result, Naameh has been receiving around 3,000 tons of solid waste everyday, thrice the amount it was designed for.[1]

2,000 additional tons of solid waste taken in daily represent 32,258 adult human bodies of an average weight of 62kgs, tossed in a space meant to welcome half of that amount, waiting to be compressed. Every. Single. Day. Considering that the population of Lebanon amounted to 5,882,562 in July 2014[2], Syrian and Palestinian refugees included, this would mean that we create exactly twice the amount of trash a year. For the past 19 years, we gave birth to the equivalent of 223,709,230 human bodies of homeless waste, 3% of the global population, that made their way to the sea, the soils, and infiltrated the air we breathe.

Discarding something doesn't make it disappear.

It weighs on me.

I take the car and drive down the coastal road. It's winter, Christmas is around the corner, the sun sets early in the afternoon this time of year, people rush from work to the mall to prepare for the festivities.

A bright orange light strikes my face, blinding me for a second. I slow down, look to my right, and watch in apocalyptic awe over three dozens of aligned green barrels filled with trash being burned on the side of the road. The flames are high, easily reaching 3 to 4 meters, the smoke is dense. I stop the car ; the scenery is as beautiful as it is horrific. I lower my window to take a picture and barely have time to lift it back up as fast as I can. A smell, that smell, fills up the car as I speed down the road to escape it. Is this what they plan on doing to the 223,709,230 bodies?

If so, what about ours?

*After the events that occurred on September 11, psychoanalytic theory considered the repeatability (of an image) as a way to abreact trauma ; i.e. to operate on assimilation and possibly repair of traumatic shock.

This time, the date is April 1st, 2016. I'm walking around large and loud machines dissecting huge rolls of imported paper, each weighing around 1.5 tons, and transforming them into all types of disposable tissues which will then be exported all over the world, only to be used and thrown away a single time. I'm in Ras Masqa, on the outskirts of Tripoli, attempting to comprehend how and why a village filled with olive trees became a concrete suburb. I pick up a box and read :

Perla is a company dedicated to provide you with new artistically creative designs and quality tissues. We hope you'll like Perla which offers you the luxury of decorating your home, car and office with attractive cardboard tissue boxes at an affordable price.

Perla is committed to provide high quality products. If you have any questions or comments, please call us anytime at 06/416521 or email us at: customercare@perla.lb.

On behalf of all of us at Perla, we thank you for your support by purchasing our products.

I am curious about the provenance of raw material, and the destination of the final products. Perla purchases its two meter high rolls from Italy, Egypt, Saudi Arabia, Canada and the United States. Young hands working unstoppably throughout the whole chain, cutting paper, assembling boxes, and filling them with the exact amount of tissues indicated on the packaging, prepping them for the outside world. I am at the White House, literally, of the Garbage State. This is where little white cells of 20x21cm are propelled by tons every day, to Lebanon, Syria, Iraq, Cyprus, Libya, Liberia, Ghana, Malta and Saudi Arabia, silently begging to be used and thrown immediately, to slowly colonize the lands where waste management has not yet been a priority. It feels like I am in a womb, but I'm not sure whose.

In Arabic, "wastes" or nifāyāt is derived from the verb "to exile," nafā - to exilematter, to exile the space that waste co-inhabits, hence making it inhabitable for others.[4]

I like the crazy idea that the ghosts of our past could come back and haunt us through the result of our own actions, quietly claiming back the territory they once had to leave, filling it with the smell of disgust towards what we have ourselves produced.

This project is part of the the 2016 Ras Masqa Artists' Residency.

[3] Transcription of Perla Factory's message on their tissue boxes.

Youmna Geday, born in 1989 in Montreal, Canada is a Lebanese artist living and working between Beirut and Paris. She graduated in 2014 with a Masters degree in photography from the National School of Photography in Arles.

The mold that we melt in