Counter is a project on women who are subjected to murder as a consequence of acts of violence in Turkey. It is a two-tier work comprising of an online memorial to the deceased and a series of shroud covers inspired by ideas of the afterlife in ancient Egyptian mythology fabricated by male prison inmates using beads. The two seemingly standalone pieces are connected through QR codes embedded in the beaded nets. Through this 'gateway' the viewer is invited to scan the code embedded into the beaded shrouds to visit the memorial website where a digital counter indicates the number of women killed by violence in the year 2013 in Turkey, updated by an NGO and the artist after each death. 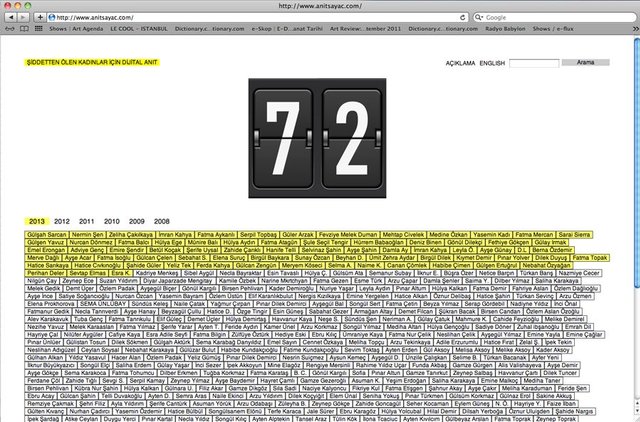 One: Mathematics is the language of nature.

Two: Everything around us can be represented and understood through numbers. Three: If you graph the numbers of any system, patterns emerge.

Therefore, there are patterns everywhere in nature.

Directed and written by Darren Aronofsky

'Counter' counts the number of reported murders of women in Turkey. It is a forward act. It never stops; never decreases; never fades away. It is a mathematical fact that carries no doubt. It is the truth.

A web browser operates by reading codes and composes them into visible or audible web pages. It is a mechanic direct act that never allows an error or any kind of interpretation with the code. If there is an error in the code, the page simply does not work. It is a mathematical fact that carries no doubt. It is the truth.

'Counter' is the evidence of the fast pace of time. An indication of a duration that is shorter than the time these woman would live: a device for counting incomplete lives. It is a mathematical fact that carries no doubt. It is the truth. 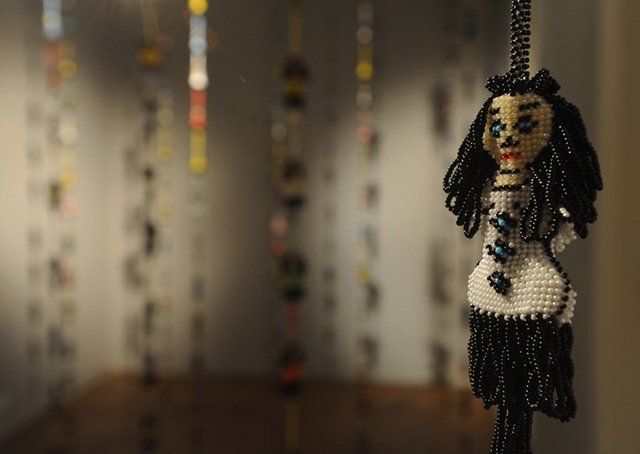 The male prisoners kill time with bead stringing. They repeat the same pattern with patience for hours and hours, days after days. A similar act of coding, each pixel and each bead form an object, a vivid, colourful object; an object as a witness of their labour. They call this labour 'prison weaving' and count the beads countless times till the witness finds its soul and departs from them. 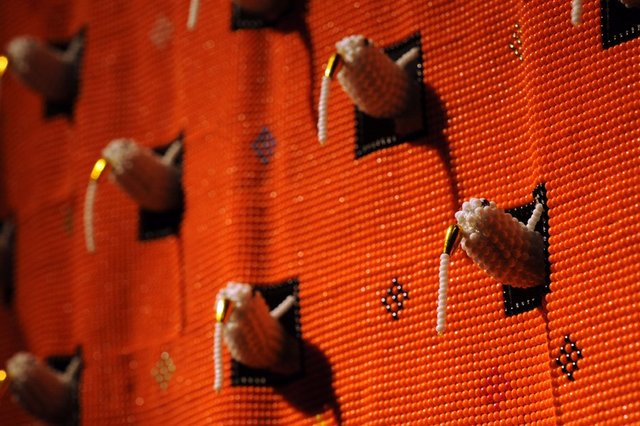 An Ancient Egyptian shroud on a coffin tells stories, each pattern, each shape, made out of beads, projects a place that can be seen only in between. The shroud embraces the body as the interface between this world and the next. Eternity is already eclipsed by the small details of the stories. Details haunts both worlds, thus, the memories are now sealed for eternity. The ground is shifting by leaving the soul in a void. 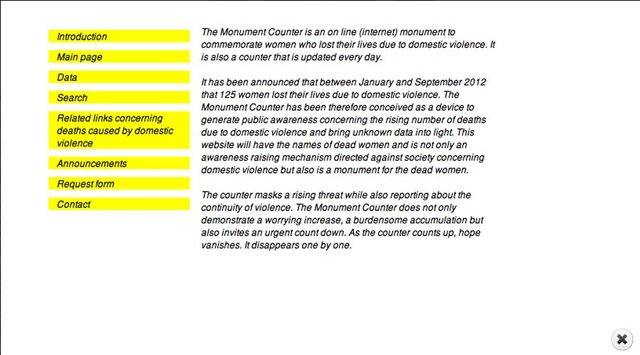 Down dropped the breeze, the sails dropped down,
'Twas sad as sad could be;
And we did speak only to break
The silence of the sea!

Extracted from The Rime of the Ancient Mariner

Silence takes over. Each bead on a string, each murder on the counter, each soul in a void mounts up a silent rage. They all need to encode this rage; only a quick response would ease their anxiety. A code is being written to merge them as one.

In the gallery space, a number of chain of dolls, suspended from the ceiling cautiously awaits for the visitors. They are indeed key chains made out of beads, but they are destined to be only 'witnesses', they exist without keys, like lost souls. They have witnessed the silent stories, colourful imaginations, guilty consciousness and repetitive labour of the prisoners. Now, they will witness the visitors.

In an almost hidden small room, located in the entrance of the gallery, a computer screen shows the 'counter', counting the murders of women who were already subject to physical abuse, trauma, humiliation, and despair right before they were killed. Then, the entire gallery is dedicated to present the shrouds produced by prisoners one and after. These shrouds confuse the visitors; these are colourful objects with full of stories. These stories sail between the weight of death and the light of hope. They are covered with details; some of them are obscure and some of them are exposed. Yet, each of them also contains a QR code (Quick Response code) which links them back to the computer screen.

Each bead turns to a pixel; each murder turns to a number; and each story swings in limbo.

Zeren Göktan (1975, Ankara),  studied Graphic Design and got her BFA from Bilkent University at 1997, respectively she had her MFA degree from the Arts department at 1999 from Bilkent University. At 2000 she moved to United States and got a second MFA degree from the School of the Museum of Fine Arts, Tufts University, Boston at 2003. She is a PHD candidate at Yildiz Technical University on the practice of art. Zeren is renowned for her installations, video and sound installations, animations and photography. Her first solo exhibition opened in Istanbul in 1997, followed by "In the name of bread for the sake of land", Kasa Gallery, (1999)  "Breadzone", Platform Garanti Contemporary Art Center, (2003) and "In-flux", Akbank Art and Culture Center (2008). Her work participated in many group shows in Turkey and abroad such as, " We Are Volunteers', 10th International Istanbul Biennial, "Not Only Possible, But Also Necessary: Optimism in the Age of Global War (2007), "Facing the Walls", Annual Visual Arts Festival at the Former Military Barracks KODRA, Thessaloniki (2008), VIDEO.IT, 'A bridge over the Mediterranean', 2009, Biennale Qui Vive, Moscow (2010).