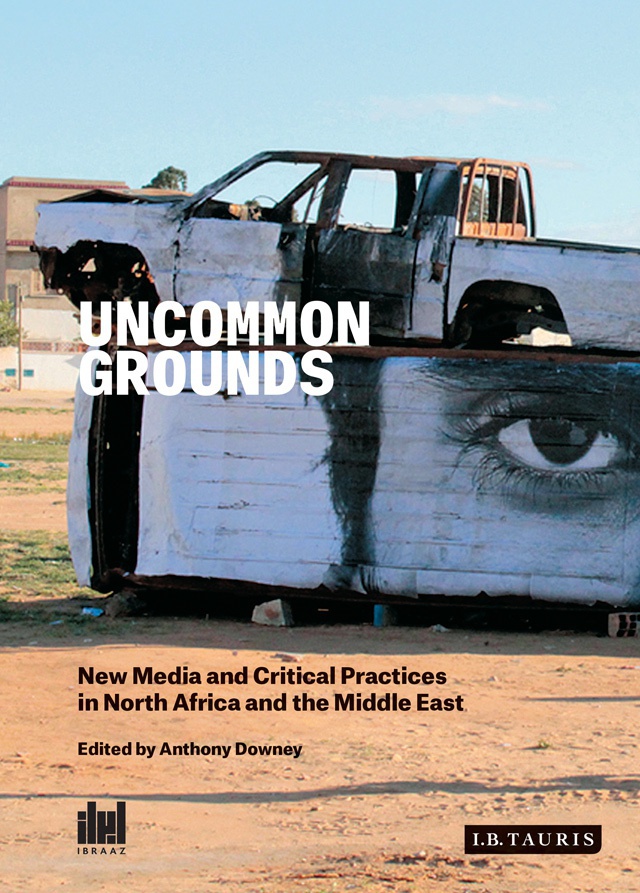 "Edited by the always insightful Anthony Downey, Uncommon Grounds is a good place to start for those seeking to understand the role of new media in the region. This isn't a conventional art book, but an exploration of new media and its impact on a land often manipulated and colonized (particularly through images) by foreign forces."
- Hrag Vartanian, Hyperallergic

"[Uncommon Grounds] presents a new analysis paradigm that moves beyond merely framing the elements of the social movements within their historical backgrounds and political interpretations, and instead engages with the specifics of the accountability of new media in the democratic movements."
- Arek Dakessian, LSE Blog

"What readers get out of [Uncommon Grounds] is an intimate and close reading of certain arts practices situated in various local contexts within the Middle East; a reading that does not claim to represent or diagnose, but rather pools together the raw materials for an interdisciplinary discussion into the politics of visual or artistic representation, grounded in case studies and inserts that illustrate some of the theoretical discussions being had."
- Wided Khadraoui, Kalimat

"Uncommon Grounds provides a crucial and necessary discussion and critique of recent cultural phenomena and artistic practices in new media throughout the MENA region."

"Uncommon Grounds is an ambitious anthology that attempts to take the measure of ... the widespread impact and appropriation of social/new media throughout visual culture in its broadest sense."

"In countries with rich histories, changing boundaries and war/conflict, artists are sharing histories, reflecting on the past to see the present and speaking truth to power. Check out the thriving artistic practices emerging in the Middle East and North Africa."

Ibraaz Publishing and I.B. Tauris are pleased to announce the book launch of Uncommon Grounds: New Media and Critical Practices in North Africa and the Middle East, edited by Anthony Downey.

In this groundbreaking book, a range of internationally renowned and emerging academics, writers, artists, curators, activists and filmmakers critically reflect on the ways in which visual culture has appropriated and developed new media across North Africa and the Middle East. Examining the opportunities presented by the real-time generation of new, relatively unregulated content online, Uncommon Grounds evaluates the prominent role that new media has come to play in artistic practices – and social movements – in the Arab world today. Analysing alternative forms of creating, broadcasting, publishing, distributing and consuming digital images, this book also enquires into a broader global concern: does new media offer a 'democratization' of – and a productive engagement with – visual culture, or merely capitalize upon the effect of immediacy at the expense of depth?

Featuring full-colour artists' inserts, this is the first book to extensively explore the degree to which the grassroots popularity of Twitter and Facebook has been co-opted into mainstream media, institutional and curatorial characterisations of 'revolution' – and whether artists should be wary of perpetuating the rhetoric and spectacle surrounding political events. In the process, Uncommon Grounds reveals how contemporary art practices actively negotiate present-day notions of community-based activism, artistic agency and political engagement.

To purchase a copy of Uncommon Grounds please follow this link.

To preview the contents of Dissonant Archives: Contemporary Visual Culture and Contested Narratives in the Middle East, follow this link.

Download a PDF of the introduction to Uncommon Grounds and the essay 'For the Common Good? Artistic Practices and Civil Society in Tunisia' by editor Anthony Downey by following this link.

The Visual Culture in North Africa and the Middle East Series is supported by the Kamel Lazaar Foundation.