Electrified and electrifying, Mona Hatoum, the first UK survey of work by the Beirut born Palestinian artist, is a powerful blend of the poetic, the personal and the highly political. Hatoum's expansive career, characterized by 35 years' worth of idiosyncratic experimentation in an impressive range of media – performance, video, photography, works on paper, sculpture and large scale installation – is celebrated at Tate Modern, London in an exhibition featuring over 100 works from the 1980s to the present day. Curated by Tate's Clarrie Wallis and Christine Van Assche, Honorary Curator at Centre Pompidou, Mona Hatoum is a challenging, confrontational, and inherently contradictory experience. 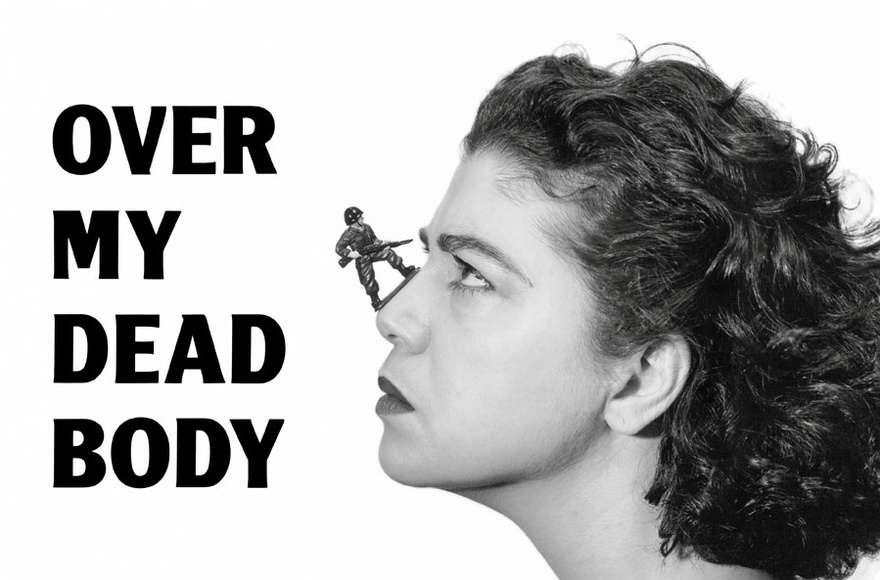 Graduating from Beirut University College in 1972, Hatoum came to Britain as a student in the mid-1970s, settling in London in 1975 when civil war in Lebanon made her return home impossible. Studying at the Byam Shaw School of Art (1975–1979) and subsequently at the Slade (1979–1981), Hatoum began in the early 1980s to make visceral video and performance work, using her body in a series of uncompromising, politically motivated episodes designed to confront issues of violence and discrimination as well as drawing more explicit attention to the 'persistent struggle [of the Palestinian people] to survive in a continuous stage of siege'.

Three such hard hitting examples include The Negotiating Table (1983), which presents the artist's blood covered body wrapped in a plastic bag sealed at the neck, her face covered in bloody bandages, and Under Siege (1982), in which the artist appears smothered in clay and trapped in a glass box that she struggles to stand upright in but is inevitably doomed to fail, while the room is filled with muffled chanting, news broadcasts and recorded conversations in Arabic, French and English. In Them and Us….and Other Divisions (1984), the artist is hooded and dressed in black overalls, slinking on her stomach between seated groups of people before reaching the end of the terrace, vigorously scrubbing the area red and setting fire to a newspaper screen concealing a wall covered in racist graffiti.

Since 1989, Hatoum has concentrated on making sculpture and large scale installation work, the result of a preoccupation with conflict, exclusion, imprisonment and oppression. Incredibly psychologically affective, such work turns on a series of binaries, designed to engender feelings of desire and revulsion as well as fear and fascination. Impenetrable (2009) a suspended square formed of hundreds of hanging lines of barbed wire is exemplary in its evocation of such conflicting emotions. The epitome of a kind of 'terrible beauty', Hatoum's homage to Venezuelan artist Jesus Rafael Soto from a distance appears innocuous, inviting and remarkably ethereal. Closer inspection, however, reveals a dangerous and repellent reality. 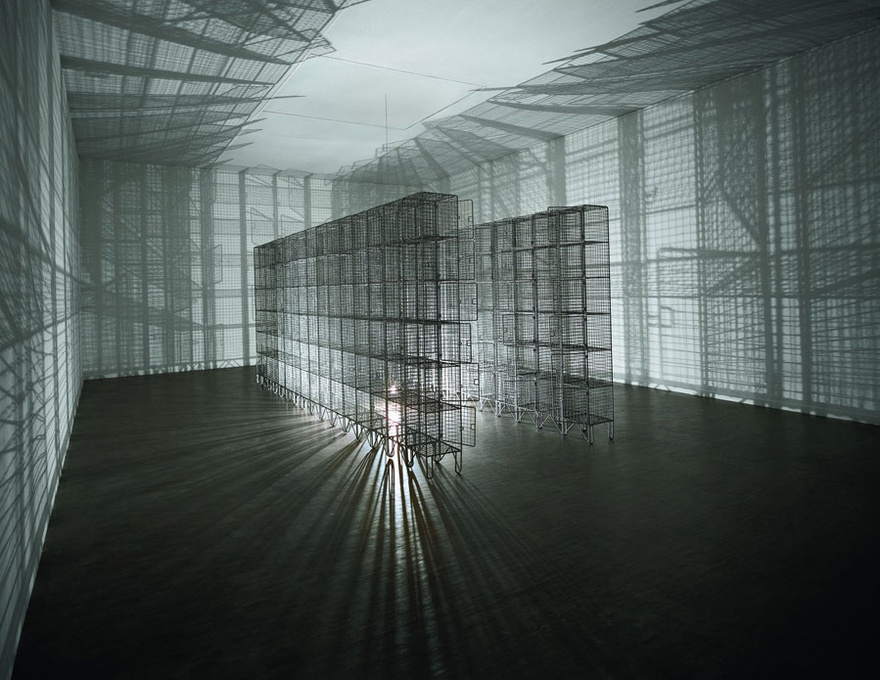 Physically, psychologically and emotionally affective, Hatoum's work is often difficult to look at, listen to, and be in a room with. This is most obviously the case with Light Sentence (1992), Corps etranger (1994) and Homebound (2000) with anxious, disorientating interiors that shudder, throb and whine in endless and inexorable repetition. Light Sentence, among the earliest examples of such work, is a three-sided enclosure made up of square wire mesh lockers that have been stacked so as to exceed human height. Hanging within this cage-like structure is a single light bulb which, moving slowly up and down, creates vast shuddering shadows, incarcerating the viewer in a traumatic vision of imprisonment and radical instability.

Corps etranger, an endoscopic journey through the artist's body via her puckered anal sphincter is equally unsettling. Reflecting on the issue of surveillance, specialist medical imaging procedures result in the ultimate intrusion: incredibly invasive video footage that renders the body's interior an alien world of glistening, pulsating tunnels. Projected onto the floor of a dark, cylindrical space, such footage seeks to implicate the viewer/voyeur too, making him/her an active participant in the violation of the artist's privacy. Homebound, however, is perhaps the most shocking of the three, consisting of an assemblage of kitchen utensils and household furniture, an unfriendly arrangement of curiously dated domestic objects each connected to the other via a proliferation of wires through which surge a lethal electric current. The current fluctuates so that the lights, positioned throughout, glare and fade and an angry amplified hum becomes, at times, almost deafening. The viewer is separated from this skeleton of a disconcerting and quite clearly deadly domestic set up by a barrier of steel wires and is forced to consider what it means to be 'Homebound'.

The body has always been central to Hatoum's practice and she is known for referencing its vulnerability and resilience in her work. Even when the artist's body does not feature, as is the case in what are largely installation pieces such as Light Sentence, Homebound, Quarters (1996), Interior/Exterior Landscape (2010), Cellules (2012–2013), and Undercurrent (red) (2008), the body (or bodies) remains an absent presence; implied, suggested and imagined. Quarters is made up of units of five bunk beds, shelves or racks positioned in such a way as to echo the Panopticon, a prison design in which inmates are always and inescapably subject to surveillance by an unseen guard; it is frightening then to imagine them occupied. Interior/Exterior Landscape resembles a bedroom of sorts, a uncanny interior containing a wooden chair conjoined with a desk, a metal bed frame attached to which are long strands of hair and a wall mounted coat rack on which hangs a shopping bag made from a cut up map. Hair is woven too into the pillow placed at the head of the bed, apparently illustrating the flight routes between Hatoum's most visited cities and serving to highlight the conditions of displacement, diaspora and transmigration shared by many in the modern era as a result of conflict and civil unrest. Expanding on this notion of conflict further is the seething mass of red fluorescent neon light that composes Hot Spot (2013): a work in which Hatoum confronts us with an apocalyptic question of terrifying magnitude: what if the whole world were one enormous danger zone? 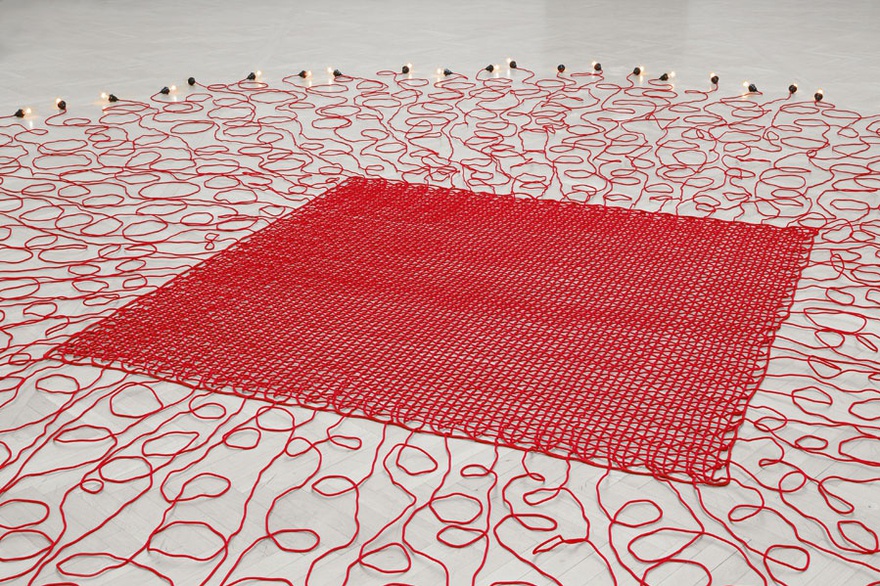 Throughout the Tate Modern show, grand visual statements like those discussed above are punctuated by far more intimate encounters that showcase Hatoum's incredible versatility as an artist, capable not only of the big and the bold, but also of little whispered asides. These include works on paper that often incorporate abject elements such as the artist's own nail clippings, urine, skin and hair that involve the viewer in an entirely different, if equally uncomfortable, relationship with the material before them. Always pushing herself to see and to do things differently, Hatoum's impressive multidisciplinary practice, her tireless experimentation and idiosyncratic exploration of the personal and political, and her engagement with the realms of the public and the private leave us in no doubt that she is an artist and a pioneer of international significance.

Curator Clarrie Wallis acknowledges the fact that Hatoum is less well known in the UK than on the continent, something that this exhibition at Tate undoubtedly helps to redress given the relevance the artist's work has to the world today. Indeed, her interrogative approach to the analysis of western power and its structures, her original reinterpretation of the language of formal minimalism, kineticism, and the spirit of Surrealism, as well as the contemporaneity of her discourse and her use of phenomenological theory mean that Hatoum's oeuvre is at once unique and universal.