Objects in Mirror are Closer than they Appear

Objects in Mirror are Closer than they Appear, a collaboration between the Tate Modern in London and the Contemporary Image Collective, Cairo, took place in the small, darkened Tate Project Space tucked away in the corner of the Tate Modern's ground level. It was the perfect setting for an exhibition interrogating the intersections between image, narrative and perception. A collection of film and video was presented with a curatorial nod to Jean Luc Godard's The Joy of Learning (Le Gai Savoir) (1969), in which two young people meet in a dark and empty television studio for 'a series of dialogues during which they undertake a rigorous analysis of the relation between reality and film.' 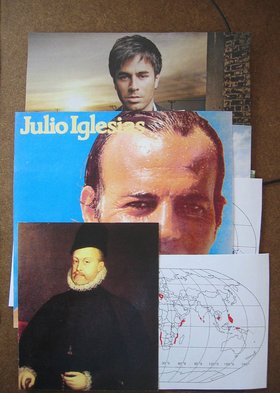 Such dialogues enacted either in dark spaces, cubes, frames or screens, is the foundation upon which this exhibition was conceived. In this, it is the double nature of the image as both reflection of reality and a producer of illusion that is under investigation. Curated by Kasia Redzisz and Aleya Hamza, it began with a work by Patricia Esquivias, Folklore II (2008): a lecture on two parallel histories of Spain mapped out through King Phillip II, figurehead of the mighty Spanish Empire in the sixteenth century, and Julio Iglesias, international twentieth century heartthrob (Enrique's dad). Between these two men emerges a history of Spain's fortunes from the wealth of glistening gold to the reliance on the gold of the sun, as the Spanish Empire gradually transitioned into a cash-strapped tourist economy in the time of Iglesias.

The connections between the two men are uncanny, presented here as royal sons of Spain. Julio's wife was Filipina, Esquivias notes, and it was under Philip's rule that Spain acquired the Philippines, a country still named after him; Julio moved to Florida, which is where Philip II also established a colony; both had eight kids, each with a 'traitor son' (Enrique got way more famous than Julio). Presented using items and objects held in front of a switched off laptop screen used as a presentation board, the links created between Imperial and contemporary Spain are clear to see. It visualises a strange and tangible unity between two separate historical entities.

Extending on this duality is the sense of im/plausibility invoked by Lars Laumann's Morrissey Foretelling the Death of Diana (2006). The short work – 16 minutes – fleshes out conspiracy claims that The Smiths' 1986 album The Queen Is Dead predicted the death of Princess Diana. It is hypnotically convincing, making connections that are at once totally unfathomable yet, within this presentation, wholly possible. It opens with the narrator, explaining over the frantic sounds of Oscillate Wildly, how the album took its cover image from Antonioni's The Eclipse, in which Alain Delon was an actor. Then he says the man who announced Diana's death was a Frenchman named Alain, how Morrissey named the album after a chapter in Hubert Selby Jr.'s novel, 'Last Exit to Brooklyn', and how Diana's car crash happened on the way to Avenue de New York. He rambles on: across cities, films, songs, and birth dates.

By the end, Laumann leaves you in a state of shock: chances are, you are entertaining the idea that what you have seen is real. In many ways, this is where this exhibition positions itself: somewhere between knowing and not knowing, seeing and/or believing, or the connections between 'all of the above'. 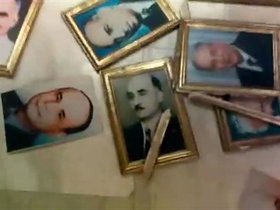 Such questions become more grounded in Maha Maamoun's Night Visitor: the Night of Counting the Years (2011), a collage of YouTube footage showing the break-in at the headquarters of State Security in the aftermath of the 2011 Egyptian revolution, is suspended on a screen viewable from both sides. To see the screen this way invokes a double reference to Shadi Abdel Salam's 1969 movie of the same name which explores the illicit trade in antiquities during the conflicts surrounding the period of the British administration. It opposes Sherif El-Azma's Powerchord Skateboard (2006), a two-channel installation featuring images inter-splicing keystone historical moments from the eighties, from Reagan to computer technology – against a portrait of the 'adolescent male'; hormonal, angry and restless.

Then there is Maamoun's other work on show: 2026 (2010), which also has a double reference. The first is to Chris Marker's The Jetty (La Jetée) (1962), about a survivor of a nuclear war imprisoned by scientists who make him a time traveller. The second is Egyptian novelist Mahmoud Othman's The Revolution of 2053 (2007).  Through the black and white video image of a man lying back with a white mask over his eyes, there is an inter-splicing of the two stories. The time-traveller recounts his vision of the future, the pyramids and Egypt by association. It is the year 2026, and he realizes in the end that it was all a fantastical projection. 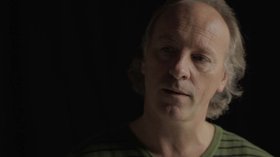 In terms of applying the ideas surrounding the image and its 'truth' or reality, it is Herman Hasselberghs's Speech Act (2011) that is perhaps the most concise. A real lecture on the nature of the mediated screen in contrast to the whacked out theories (albeit plausible) offered in Laumann's Morrissey/Diana theory, Speech Act dissects the complexities of the cinematic image through a critique of James Cameron's Avatar, and the experience of 'other' things, people and worlds as transmitted through a screen. In the end, the line between 'real' and simulated experience is blurred: whether reality is an illusion or vice versa is unclear.

In the talk, the man considers the experience of watching war on the television: events happening elsewhere. Like a confession, his thoughts invoke a video essay by Godard made from material from Jusqu'à la victoire, a 1970 film created during his time with The Dziga Vertov Group: a pro-Palestinian film, which would form Ici et Ailleurs (1976), or Here and Elsewhere. The work essentially questions our experience of the world through a screen that is at once a positive and negative space: a void and a web of meaning. It is through this screen Godard proposes that we live our lives – through the lives of others.  We could even live another country's revolution or resistance, for instance, without even leaving our living rooms – believing all the while that we are revolutionary. 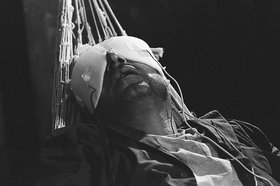 The speaker in Speech Act notes at one point during his musing: 'Shut your eyes and you see black. Black is nothing…Black is what was, is no longer and can possibly be.' This statement recalls another key work that explored the frame of representation as a certain void, not presented here, but nevertheless remains a certain spectre over contemporary art and image production: Kazimir Malevich's Black Square (1915) – something Malevich proposed as both void and feeling. It was a painting that revolutionized painting, and was met with horror by the work's critics. It was the moment the classical frame of representation – the realist painting – had been violated, or better yet, erased.

That black frame, like that void or feeling when you close your eyes, is where the body can be caught listening to Eugène Ysaÿe before lunging into dance as the music stops, as in Manon de Boer's Dissonant (2010), shown in a small room cut off from the rest of the exhibition. It is in that same frame, like a white piece of paper, that words are written and erased; a story told in fragments, as in Ján Mančuška's text-based video of words appearing and disappearing on a white screen in A Middle Aged Woman (2009), also presented. The thing about the black square, like the screen on which images tell stories that may or may not be true, is that the frame must be seen as double-sided in order for it to effect reality.

Objects in Mirror Are Close than they Appear was presented at the Tate Modern Project Space between 9th November 2012 and 17th February 2013. It will be showing at the Contemporary Image Collective in Cairo from 15th May to 12th June 2013.