The Writing of Art

Presenting six contemporary artists – Graham Day, Hanieh Delecroix, Parastou Forouhar, Farnaz Jahanbin and Katayoun Rouhi – whose work is inspired by traditional arts based on Persian and Arabic script, The Writing of Art explored the plasticity between word, idea and image, traditionally juxtaposed as discrete systems of the visual and the discursive to pose a challenge to the simple notion that globalisation destroys cultural identity. The exhibition, presented at London's Ismaili Centre as part of the Nour Festival of the Arts, repositioned struggles associated with the loss of language and cultural assimilation to present a kaleidoscope of geographies and practices in which cultural identity is not so much lost as it is redistributed through de-territorialization and distance.

Two paintings from the Paris-based artist Hanieh Delecroix refract both her former practice as a clinical psychologist working with trauma patients and her interest in the power of language, both written and discursive. Influenced by her father who, having left Tehran with his family during the 1979 Revolution, shared with her his passion for Persian poetry when he could no longer practice law, Delecroix became aware of language's power as a vehicle of culture, identity and loss from a very young age. The artist, though enamoured with the lyrical and visual beauty of Persian, never quite achieved her father's command of the language. 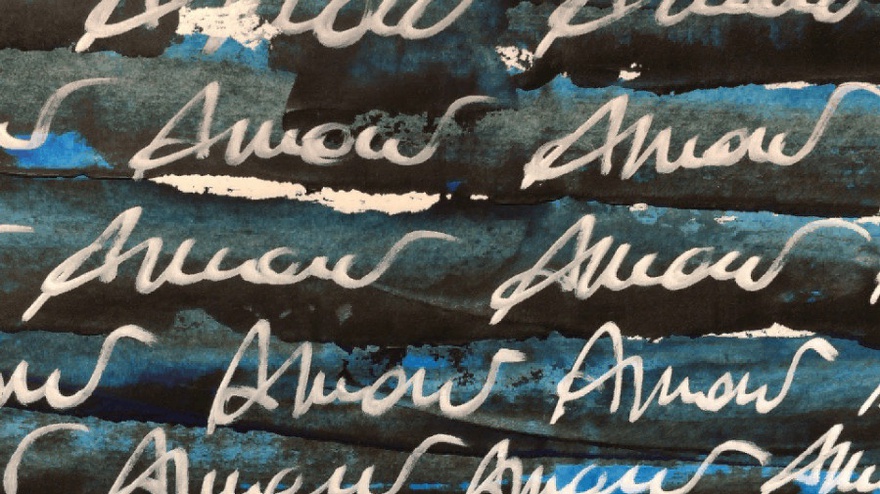 The works on show offer a kind of Rorschach text in response to this background. In Ashegh, the artist employs multiple iterations of script laying the word 'amour' atop a fervent torrent of sweeping strokes of black and blue acrylics to cover a two metre stretch of free-floating translucent paper, chosen for its fragility and symbolic skin-like quality. The work's title, Ashegh, is the Farsi counterpart to 'amour'. Hung next to, and partly overlapping, Ashegh was Soulmate, a painting of similar colour and temperamentin which the Farsi word 'ashegh' is repeated again in acrylic on paper. Together these works present counterparts: imperfect translations that inform and provoke one another. Years of being occupied by the language of another has, metaphorically, caused the artist's native tongue to become the 'soulmate' of the other, the French informed by the Persian, the Persian likewise layered by the French.

Repetition is an ancient strategy within the calligraphic arts, drawing on mystical practices to systematically empty language of meaning in order to transcend its limits. Here meaning, while hidden behind the apparel of two distinct languages, nonetheless melts together through a peripatetic repetition, while repetition likewise invokes the Freudian response to trauma.[1] Language, like the identity of lover, is not so much destroyed as transformed and informed by the other. Repetition as a strategy to induce mystical awareness motivates the work of Farnaz Jahanbin. In Letters, Jahanbin employs commercial paints and large brushes akin to those favoured by American abstract expressionist painters to repeatedly apply calligraphic strokes while she sings from Khayyam's Rubayat – 'the enigma of creation can be read by neither you nor me' – a process she uses to empty her mind and induce a space of abstraction allowing her to depict calligraphic notations of visual harmony yet devoid of meaning. 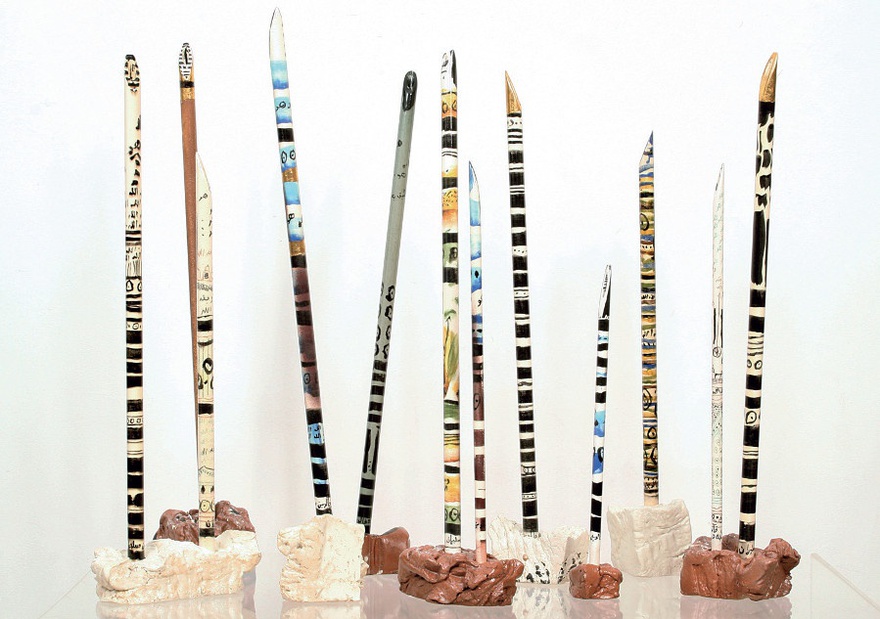 A similar process is apparent in a series of ceramic works from the Tunisian studio potter and painter Khaled Ben Slimane who forms from clay slender calligraphic writing instruments, known as 'qalams'. These he then decorates with what on first glance appear to be traditional calligraphic notation. However the viewer's expectations are thwarted. These sweeping scripts, though imitative of words, offer no meaning. Decorative marks, a simulcra of language, like Jahanbin, Slimane achieves his artistry through performing endless iterations of a single phrase until his hand has forgotten how to form words. Only once he has fully emptied the form of content does he then begin to apply his glazes to create his calligraphic marks.

A fundamental principle of Islamic design relates to the idea of the dissolution of matter. Surfaces are ornamented with repeated patterns to disguise and 'dissolve' the matter, giving rise to non-representational art forms intended to transcend materiality and direct the mind to the sublime. In Slimane's hands, repetition takes on an ironic and reflexive character. Through a process of failed duplication, Slimane renders language indecipherable, much as might the script of a foreign language communicate little past its decorative character. Indeed, these works inevitably reference the non-native collector whose appreciation of calligraphic form is often inspired more by its ornamental value rather than understanding, yet whose naivety is precisely what permits the form to infiltrate his own culture. Slimane implicates the viewer in his process of failed duplication causing the works to assume a performative character. For in reading and rereading the script in an attempt to decipher textual meaning, the native speaker begins to identify as 'foreigner,' becoming aware of a very personal alienation to one's own language. 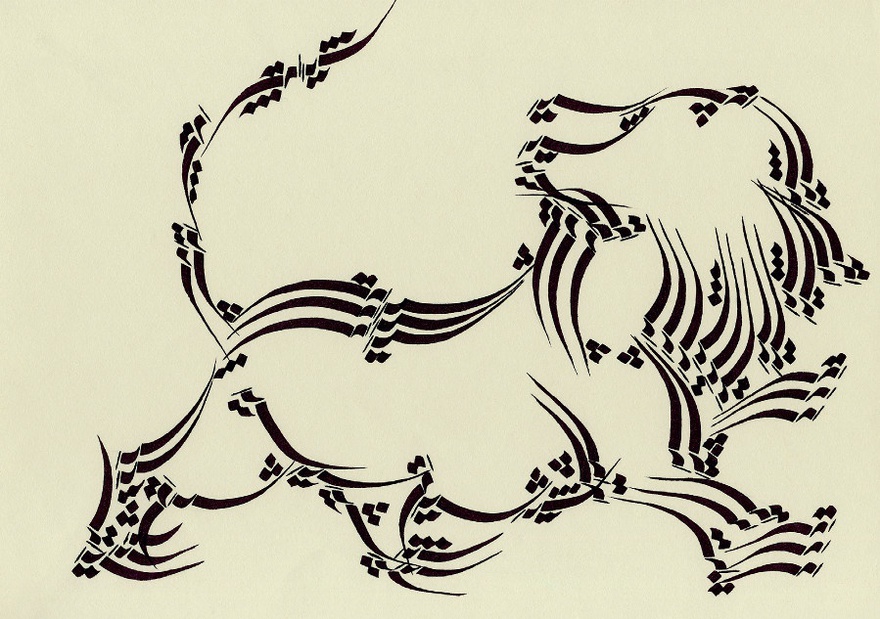 Illegibility and obscurity thus assumes significance in Slimane's practice, recalling his own childhood experience of loss when he encountered Persian legal manuscripts from the 16th century hidden in away in his father's wardrobe. These ancient texts drawn from his father's legal practice fascinated him. They were indecipherable; with the script no longer in use, Slimane could decode only fragments. He became aware of himself as 'alien' to his own culture and history, and the experience would later influence his complex reading of cultural space as one in which loss and alienation underscore a continually developing narrative.

Repetition is one strategy to have developed out of calligraphy; another important practice originates in the 'science of the dot'. Parastou Forouhar adroitly applies this latter practice to create Persian for Beginners, a series of zoomorphic calligraphic drawings that offer satiric instruction on the Persian language which she made while with the German art collective, Fahrrad Halle. Living under the Revolution, Forouhar, then studying art at Tehran University, learned how to encode images to express dissent, bringing these strategies with her to Germany. Both her parents were murdered as political dissidents. Torn from her culture and geographically displaced, the artist sought to distil alienation into a source for creativity, employing 'the science of the dot' in a series of works that imbue 'teaching' Persian to the uninitiated with multiple ironies. The 'dot' itself is in calligraphic practice allegorical of the metaphysical reality of Allah, a geometric point with no beginning and no end carefully employed to infuse the craft with layers of mystical as well as exoteric meaning.[2] By the 15th century, when taboos outlawing iconography had begun to wane, this science was subtly reapplied to permit figurative drawing through calligraphic zoomorphic representation. Forourhars' calligraphic drawings recall this subtle shift, obliquely reapplying a subversion to offer the non-Persian speaker an instruction in the Persian language that carries with it a lesson in Persian art history. Equally ingenious is the work of Graham Day, a London-based artist whose work focuses on intercultural text-based explorations. Day reinterprets yet another aspect of calligraphy, namely its 'scared geometry', to create his Lutfallah series, large painted works that reiterate Qur'anic verses found in the 17th century Mosque of Shaykh Lutfallah in Isfahan. Careful study of the calligraphic detail led Day to realise that altering the mosaics from a regular square into an unfamiliar shape could reorient the 'play of surfaces' and renew the experience of the text and its meaning. In the artist's words, 'I produced a series of works that took texts from the same mosque and arranged them into unfamiliar shapes to generate the same enhanced concentration thus allowing readers to look with new eyes and re-appreciate familiar.' The texts thus underwent a transformation, a reorientation that in offering precise geometries from the perspective of the artist's western eye rendered alien what was previously iconic, reimaging both form and meaning through what is unfamiliar and strange.

Globalization it seems, rather than producing a crude form of homogenization, challenges our social-psychological attachment any one specific factor, be it to locality, language or indeed ethnicity. Perhaps it is this inability to determine invariant points that makes globalisation in some ways so threatening. To borrow from cultural historical John Tomlinson, 'cultural experience is in various ways 'lifted out' of its traditional 'anchoring' in particular localities' becoming instead a de-territorialised psychological space that eludes objectification or external identification.[3] The works presented in the Writing of Art offer a new appreciation of cultural identity to reveal a narrative that is continually processing cross-cultural and generational influences and missing texts to give rise to a 'complex connectivity' of constellations to form a dynamic and shifting psychological space.

The Writing of Art was on show at the Ismaili Centre, London from 20th October to 5th November, 2016 as part of the Nour Festival of the Arts. For more details, please follow this link: https://www.rbkc.gov.uk/nour/events/writing-art.

[1] Repetition compulsion articulated by Sigmund Freud in 1914 is a psychological phenomenon in which a person repeats a traumatic event or its circumstances over and over again.

[2] 'Ibn Muqla (d. 940), a native of Shiraz, Iran, developed his influential science of dot-based proportions during the lifetime of one of early Sufism's most controversial ecstatic figures, Mansur al-Hallaj (d. 922). Both Sufis and Sufi calligraphers regarded the dot not just as the beginning of all letters, but also as a sign of God's creative power.' See, Meena Sharify-Funk, '"Geometry of the Spirit": Sufism, Calligraphy, and Letter Mysticism', SARTS, Online Edition (vol. 27, no. 2).

Rozemin Keshvani, originally from Victoria, Canada, is an art historian, independent curator and writer based in London. She has worked with Flat Time House and Laure Genillard galleries in London as well as the ZKM Centre for Art and Media Technology in Karlsruhe and the Trondheim Kunstmuseum in Norway. She holds a Master of Letters in Art History, Modern and Contemporary Art (with distinction) from University of Glasgow/Christies Education (2011), as well as an LLB from the University of Toronto, and an Honours BA in Philosophy from the University of Victoria. Rozemin is the author of several works on Gustav Metzger and John Latham and she has contributed to monographs on Adam Barker-Mill, Gary Woodley and Werner Schreib.