The Portrait is an Address

Slightly askew, on one of the brightly coloured gels stuck to the panes of Beirut Art Center's window front, was a transparency of an image Hassan Khan has used before: what appears to be a promotional image of a young woman with exuberant hair ornamentation. This new work, The Portrait is an Address (2016), coloured the world outside; from inside the space, you could see cranes, building tops and the sky through her and the colors around her. The effect was cinematic, but up close I saw imperfections at the edges of each gel – traces of glue or scratches. 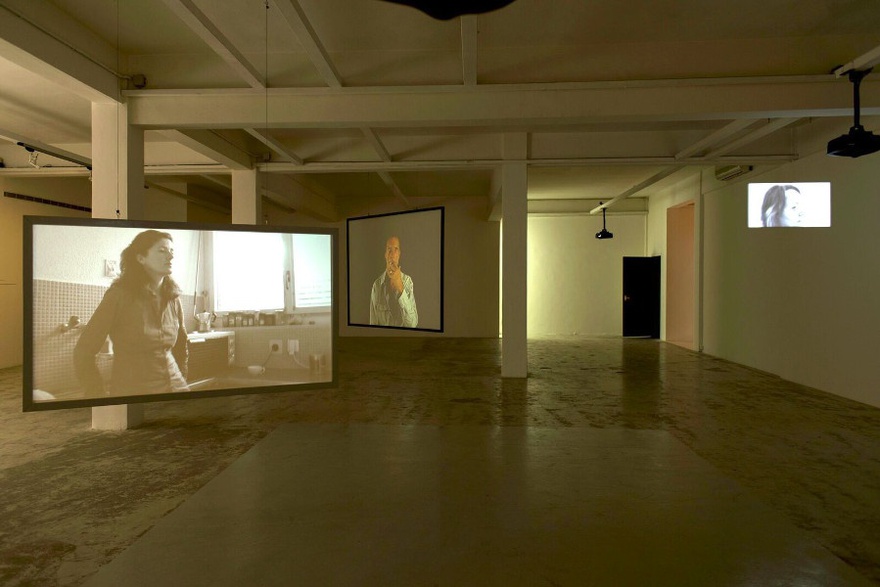 The whole exhibition, a selection of 13 works by Khan, was also called The Portrait is an Address. It was filled by a melancholic, repeatedly swelling droning noise – a deliberate leak from the central work, RANT (2008), a black-and-white video projected on a screen suspended in the show's central white tunnel, which connected the two other exhibition spaces. At the centre of the screen sits a black-T-shirted woman at a white desk. The image veers between over and under-exposed, but tends toward the former, stylizing her surfaces. The woman seems pensive, and becomes increasingly worked up and shaky. The film itself is mostly silent except for the swelling soundtrack, but as we watch, she makes interjections in Arabic (subtitled in English): 'How could they do this to me?' and: 'I am the one who is stupid'. Her porous skin glistens and intermittent close-ups focus on a hand, or the lighter she brings out to fiddle with; the camera's gaze objectifies her. But her words are barely not internal – the opposite of surface – and don't make much sense. It feels uncomfortable and familiar.

Like RANT, the show itself was stark, mostly monochrome. Much of the floor was painted glossy white, highlighting lumps and picking up scuff-marks from people's shoes. In the first gallery space were six works in different media and four languages. The sound piece Three Solos (Excerpt from Composition for a Public Park) (2013) could only be experienced fully in French, although a English translation was stuck on the wall. The large wall text Mahmoud El Ansari (2010) needed Arabic, although a label offered an English translation. The six drawings of stuffedpigfollies (2007), displayed on a slightly jerry-built table, and the video sometime/somewhere else (2001) would be ungraspable without English. 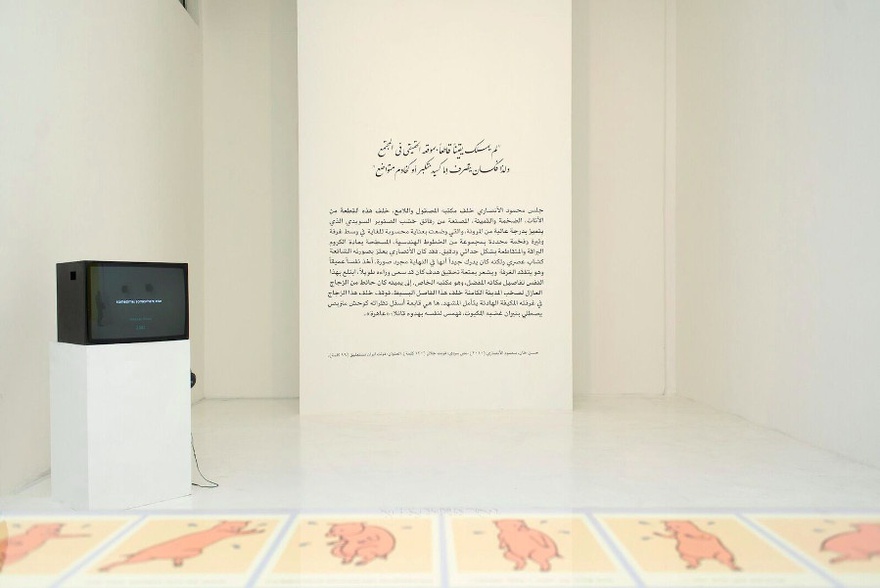 Playing on a big black boxy monitor, sometime/somewhere else is a triptych of sorts, and almost the only Khan work with a direct self-portrait. There are two in fact: at the top of the screen is a horizontal strip in which an earnest 15-year-old Khan talks to a Swedish TV station about reviving heavy industry in Egypt, and at the bottom, a strip in which a 17-year-old version dramatically plays electric guitar. In between, 32 lines appear one after the other as of a poem: 'this is a text / this is a cipher / this is a message / this is a code / this is an insanely brief memory / this is a frame / this is an example / this is a drama / this is a language / this is a politics / this is a trail', and so on. Introductory inter-titles speak of fantasies of transmission and playing games with the outside world.

The aesthetic is VHS and the vibe is awkward embarrassment mixed with audacious exhibitionism. Alongside RANT's soundtrack, Sometime/somewhere else set the tone for the exhibition. Its nineties look was shared by the visuals of the whole show: black-and-white, rough-and-ready, video-heavy. Throughout, Khan would self-consciously direct our gaze back to the artist himself, through the eyes of his subjects or through stand-ins such as a little boy in fighting pose in the nearby photograph Untitled, Alphabet Book C (2006) or worried pigs (stuffedpigsfollies). And the 32 statements of sometime/somewhere else seem revealing of Khan's systematically intuitive and coded approach to art-making in general.

Language difficulties, as encountered by non-trilingual viewers in that first space, accentuate the impossibility of knowing what's going on inside other people. Likewise, Khan's works are generally a bit sealed off, emitting clues about the rules behind their construction. We can never really get in other people's heads, but there are moments maybe when barriers break down. These moments were constructed through the form in the works in The Portrait is an Address – to create a discomfort, an embarrassment, a worry, a look in the mirror – but also in how the artworks encroached on each other, rather than standing isolated and alone. 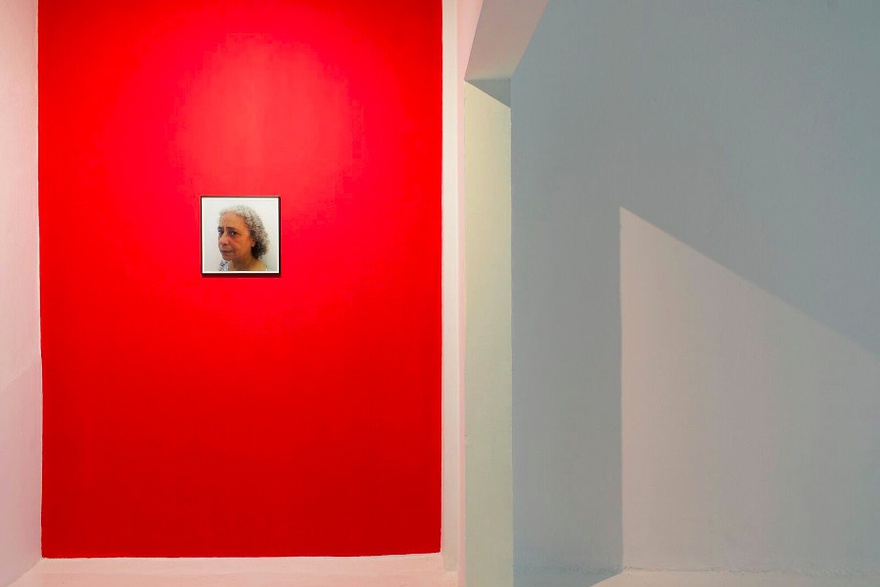 At the far side of the tunnel in which RANT was screened, a red glow in the whiteness came from a red-painted wall on which hung My Mother (2013): a photograph of Khan's mother photographed against a white wall, looking at him and us with the same wary ambivalence as each subject who looked at the camera in this show. Around the corner was the final space in the exhibition, where three hanging rectangular projection screens hung, on which three almost completely silent videos observed people's surfaces very carefully. In Studies for Structuralist Film no. 2 (2013), Khan does this by running repeatedly around them with a camera, zooming in and out as they sit and occasionally make eye contact. In GBRL (2010), he follows the protagonist around her flat as she makes her coffee and waits for it to brew, with all sound turned off save for two exclamations: 'Yes!' and 'I will do it!'. The first screen to confront viewers upon entry to this space contained a man, Graham Waite, who is no longer alive (G.R.A.H.A.M., 2008). His eyes glisten and have a similar wary, vulnerable yet obliging look as Khan's mother. The video is slowed down slightly, so we see Graham's body breathing very clearly, but we can't hear the internal monologue that the exhibition handout told us he's giving.

On the wall in that space was Insecure (2002): head-height printed vinyl instructions that can be used to sound out wobbly definitions of yourself and the not very porous dividing lines between yourself and other people. 'Whisper your name over and over to yourself till it doesn't make sense', for example, or: 'In the morning act out something embarrassing you did the night before in front of the mirror'. Amid all this intimate, familial defining and undefining of borders between self and others was a tiny video projected low on a wall: Technicolor Mubarak (2011), showing the ousted dictator sitting, bizarrely, next to a photo himself. It flashes in the bright base colours of analogue video, which echoed precisely the colours of the work this exhibition began with: The Portrait is an Address. 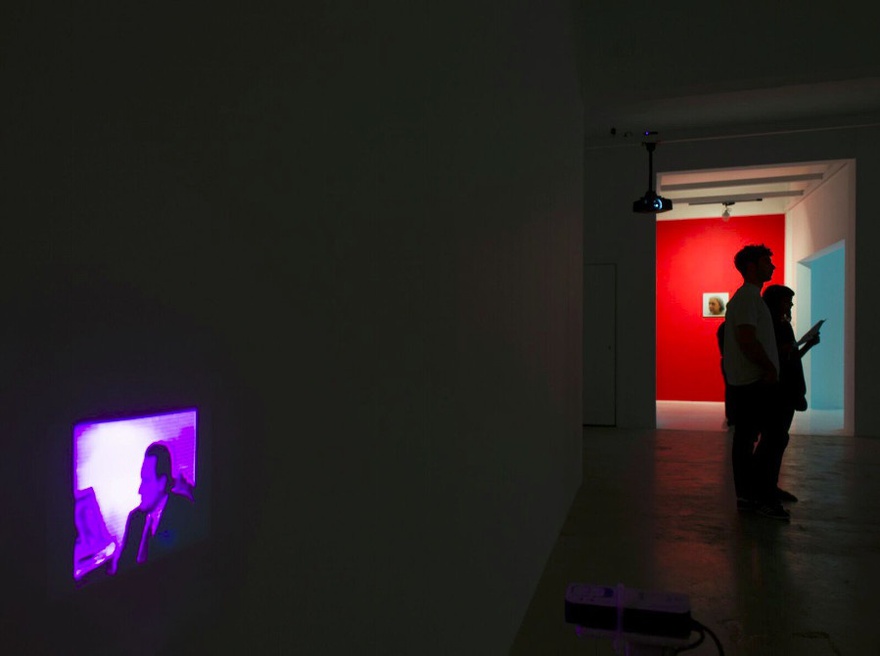 Khan has often tended to look backwards, at past works or moments, but the retro look of this exhibition combined with the sad, droning soundtrack coming from RANT seemed to speak of loss. We know that Graham Waite is gone, so is Khan's audacious youth. Mubarak is ousted. There is no more VHS. We feel the intense regret of the protagonist in RANT. This sense of loss made the deliberately impermeable aspect of Khan's works gentler, more relatable. There was also something softer about this exhibition, when compared to Khan's previous, slicker shows. Through the 13 portraits presented, the cryptic nature of his work was shifted onto his subjects, with works themselves less hermetically sealed by looser and leakier display choices.

Doublings and mirror images recurred throughout The Portrait is an Address, whether it was the two Khans in sometime/somewhere else, the protagonist looking at herself in the bathroom mirror in GBRL, the sentence 'Look at yourself in the mirror and try to imagine you are someone you're meeting for the first time' in Insecure, the two Mubaraks, or one of the six panicking pigs of stuffedpigfollies saying: 'I hesitate when I meet my living face.' The pigs are sweaty, and so is the protagonist in RANT; everyone is trapped in a rectangle.

The Portrait is an Address was on show at Beirut Art Center from 7 September to 13 November 2016. For more information, follow this link.

Jenifer Evans is the English-language culture editor for Mada Masr and co-runs with Taha Belal an art production and dispersion outfit called Nile Sunset Annex, both based in Cairo.