Katia Kameli at the Mosaic Rooms

What language do you speak stranger?, the title of Katia Kameli's exhibition at the Mosaic Rooms, presents three separate installations that explore distinct but interrelated literary forms, ranging from storytelling, translation and the novel. On display is the transmigration from the spoken or written tradition to the gallery space, and the consequent problematics of language, translation and transmissibility.

On entering the gallery's first floor room, viewers are invited to take a seat within a re-constructed version of the Al-Halqa, the traditional Arab storyteller circle. A semi-circular bench provided with red cushions faces a screen where the film The Storyteller is projected. Originally commissioned for the 2012 Marrakesh Biennale, the film revolves around the figure of Al Azalia, a professional storyteller of the Djama el Fna square in Marrakesh[1]. As we soon discover, Al Azalia is no ordinary storyteller; rather than gleaning his stories from oral tradition, he specializes in the storytelling of films, specifically from Bollywood. Upon Kameli's request, Al Azalia offers a retelling of Dosti (Friendship), a 1964 Bollywood film focusing on the relationship between two boys, one blind and the other disabled. 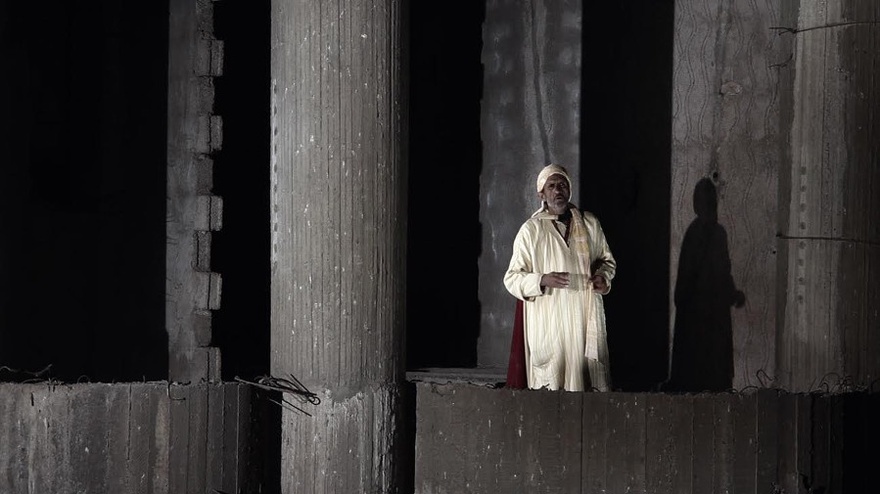 Far from his familiar space of work, Al Azalia speaks from the balconies of the city's unfinished opera house, which is part of the Theatre Royale. The building – whose construction began in the 1970s and is entrusted to Tunisian architect Charles Boccara – consists of an outdoor Amphitheatre and the yet incomplete opera house. Doubly cut off from his usual surroundings, and sharing the same space and time with his audience, Al Azalia is turned into the digital image of a ghost roving amongst this grey, monumental, concrete background. Kameli's film regularly cuts between the storyteller and clips taken from the black-and-white movie; the intended irony lies in the fact that the storyteller who takes his stories from films ends up imprisoned in the same medium. Here, orality, presence and communal reception – the very elements of storytelling – are frustrated by the new conditions of transmission. And yet, another form of dissemination takes place, one that transforms as much as it preserves its objects.

Just as The Storyteller traces the journey of a tale from film to storytelling back to film, so the installation Stream of Stories (2015–16) follows the meanderings and transformations of fables across three distinct narrative traditions: the Indian Panchatantra, the Arab Kalila wa Dimna and the French classic collection Fables Choisies (1668–94) written by Jean de La Fontaine.[2] The project stems from ongoing research into the origins of the latter collection, uncovering its often-unacknowledged non-Western sources of inspiration, the Panchatantra and Kalila wa Dimna specifically, and comprises an expansive collection of materials, neatly presented along the walls of the room. These include: a wall chart tracing the pedigree of the Panchatantra cycle; four original manuscripts; cardboard masks of a lion and a camel (two of the allegorical characters in the fables); and three filmed interviews with translators and historians, including a contribution from writer and translator Omer Berrada. A series of text-pieces complete the installation, comprised of three silk-screened prints with extracts from different versions of a similar fable, in French titled The Animals seized with the plague. In each piece, hand-gilded passages stand out to signal the changes, adaptations and oscillations in meaning that occurred through the various translations. Nearby, two illustrated prints form a singular composite of two fables whose versions range from the thirteenth to the twentieth centuries and differ in style and interpretation; gilded and printed on Awagami bamboo paper, these illustrations resemble antiques, which give the impression of timelessness and remoteness of the stories. 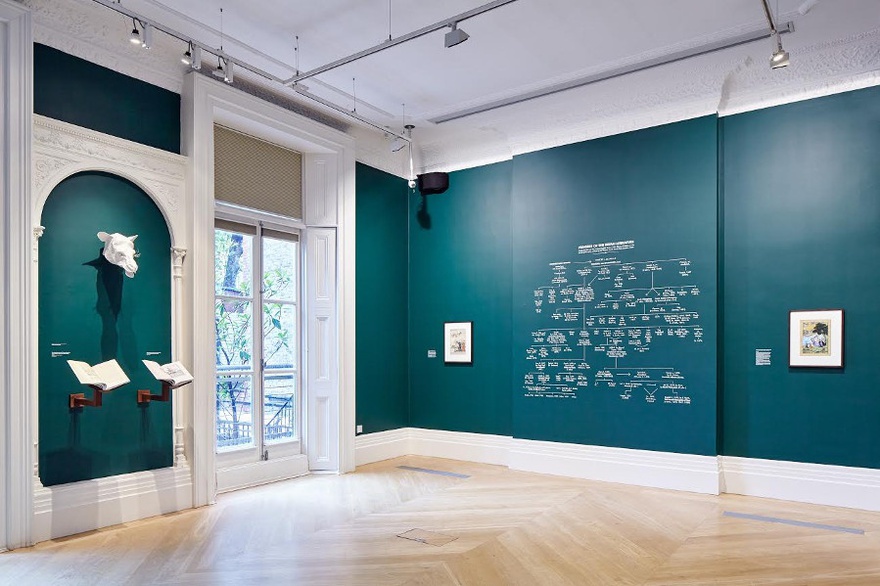 The varied materials presented in the installation recall something Omar Berrada noted in his interview, when he talks about translation not being limited to content alone, that what is said cannot be separated from how it is said. The translator doesn't simply pour the content of one bottle into another bottle; rather, s/he must break the bottle and use the fragments to reconstruct an inevitably different version of the text on the other side of the linguistic border. Using this metaphor to read the exhibition, Kameli's installations appear as fragments of a broken vessel, suspended in the moment that precedes their re-composition.

Yet, this re-composition within the post-colonial context points to a desire to re-translate that which is inevitably linked to the desire to re-write history. This impulse informs the last film on display The Algerian Novel (Chapter 1) (2016) – a short documentary that revolves around a street stall in Algiers, where a father and son sell postcards and reproductions of archival photographs. The camera pans along the stalls showing customers perusing the collections and passersby walking distractedly next to a wall of postcards – a sort of historical collage spontaneously originating from the streets. Sometimes the image stops in a freeze-frame imitating the stillness of postcards. In the accompanying soundtrack we hear the voices of invisible interlocutors – students, historians, collectors, writers – trying to make sense of the popular craze of collecting these images, and their significance to Algeria's history. Following the country's independence in 1962, the 'official' colonial archival material was transferred to France, and so in its absence, another popular tradition – what Benjamin would call second tradition  – started to emerge. This vernacular heritage allows for disruptive readings of the past, and yet it is not immune to nostalgic idealizations of a fancied pre-colonial purity. As one disenchanted commentator in the film observes, these pictures are simply figurations of history, and not history itself. 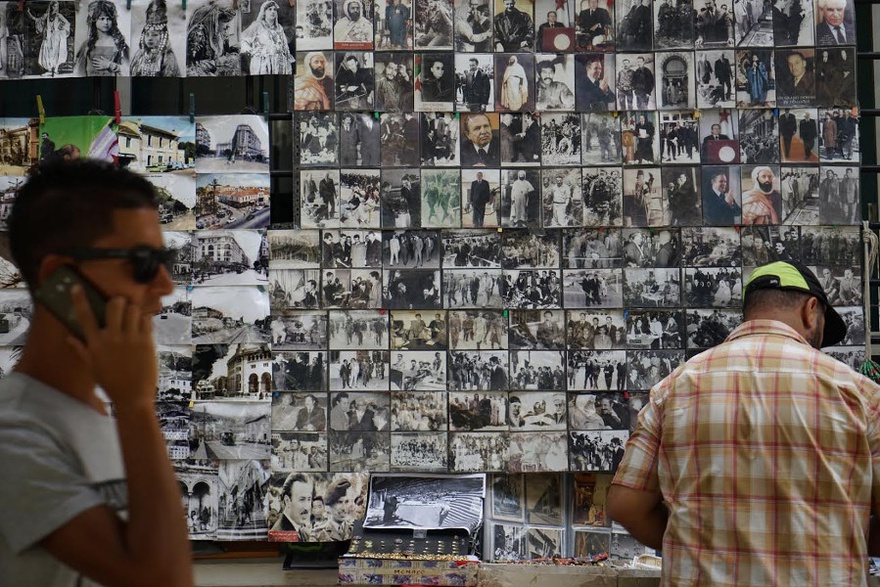 Throughout the entire visit, the question What language do you speak stranger? lingered, as I grew aware of the language(s) and means through which content is apprehended. Not speaking Arabic and my French being rather poor, I had to rely (presumably as a large majority of London visitors did) on the English subtitles: a pervasive, yet under-discussed feature of how works circulate in an increasingly transnational (yet Western inflected) art world. If, in the art world – as in the Al-Halqa circle – 'everyone is a stranger' it is important to remember that the lingua franca that we use to translate and communicate with is not a neutral medium.

Indeed, translation features in the show not simply as a bridge between languages, but also mediums, cultures and narrative forms, opening up a space-in-between which the works seek to inhabit. However, in the transposition from the page to the space, from the present voice to its recorded trace, something of the ambiguity – tied to the liveliness of the original and to its unstable afterlife – seems to be lost in its final presentation. The inherent paradox at the core of the act of collecting and documenting ephemeral or live practices is that in order to preserve an object, one has to remove it from its living context. Kameli's work seems to be caught in this conundrum. Her works offer us a cast of stories in transit, caught in their movement from one medium to the other, from one cultural tradition to another.

What language do you speak stranger? will be showing at the Mosaic Rooms until the 3 December 2016. For more information, follow this link.

[1] For a description of the genesis of the project by the artist herself, see here: http://www.ibraaz.org/projects/60

Elisa Adami is a writer and researcher working across the fields of contemporary art and visual cultures. She is currently a AHRC-funded PhD candidate at the Royal College of Art, London, where she is conducting a research on the abstraction/obfuscation of the photographic historical document in contemporary art, with a focus on the work of Lebanese artists. She is assistant lecturer at Kingston University, London. Elisa has contributed to both academic journals (Journal of Visual Culture) and non-academic publications (Flash Art), and is a co-founder of Mnemoscape, a research platform, online magazine and curatorial project dedicated to furthering research into contemporary visual culture and art practices that operate at the interstices of political and historical scrutiny, with a special focus on issues of memory, methodology and the archive.