Art et Liberté: Rupture, War and Surrealism in Egypt (1938–1948) at the Centre Pompidou in Paris is the culmination of six years of research, initiated by guest curators Sam Bardaouil and Till Fellrath. On display is a comprehensive exhibition about the Egyptian Art and Liberty group (A&L) – an eclectic collective of artists, writers and intellectuals steered by Georges Henein, Kamel El-Telmisany, Fouad and Anouar Kamel and Ramses Younane, between 1938 and 1948.

The exhibition brings together extensive archival and visual documentation, including more than 130 artworks and 150 documents from 50 lenders in fifteen countries. Most of the works on display are of unseen paintings taken from public and private collections, including the Abdel Hadi El-Gazzar estate, Naguib and Ghada Sawiris, and Mai El Dib. The works are loosely arranged into nine sections, whose titles originate from the group's own writings: 'The Permanent Revolution', 'The Voice of Canons', 'Fragmented Bodies', 'Subjective Realism', 'The Woman of the City', 'The Contemporary Art Group: An Egyptian Art', 'The Surrealist Photo', 'Georges Henein', and 'Writing with Pictures'. In this deep engagement, the multiple layers, directions and activities of the A&L are uncovered, as the exhibition seeks to chart their role as active catalysts in expanding the local horizons of artistic and intellectual experiences, as well as contributing to the global movement of Surrealism.

On entering the Pompidou's fourth floor gallery, visitors are brought into the context of 1930s Egypt with a black and white wall photograph showing the inauguration of the Salon du Caire, organized by the Societé des amis de l'art in 1927, and another photograph showing members of Art and Liberty during a 1941 exhibition. Both images shed light on a moment of confrontation between two artistic and political ideologies and set the backdrop by which A&L's formation is read. Starting in the late 1930s, this younger generation of avant-garde artists rebelled against the academicism, conservatism, fascism and institutional elitism of the conservative bourgeoisie, the Societé, and other official art establishments. 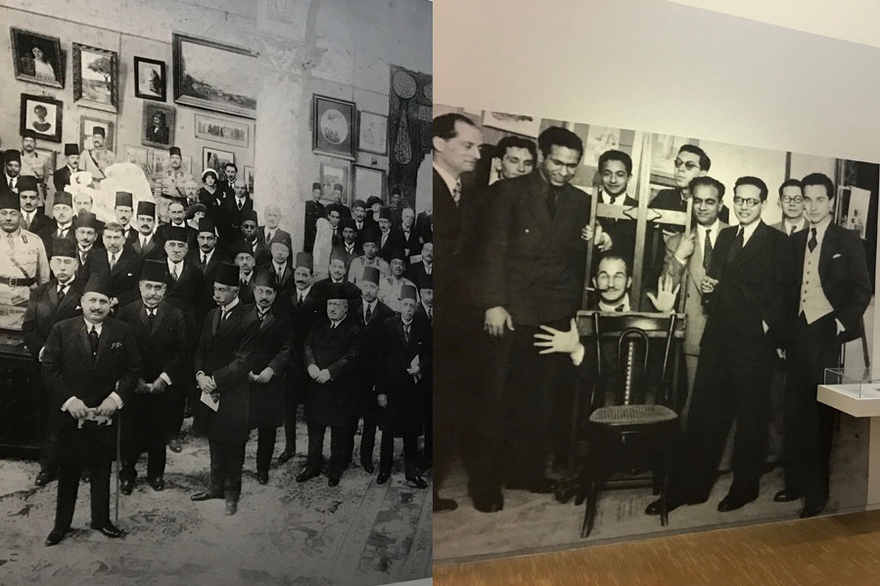 Presented in glass displays in the same room are invitations to exhibitions by and for artists affiliated to the Societé, such as an invitation card from 1928 to the inauguration of Mahmoud Moukhtar's sculpture Egypt Awakening in Bab el-Hadid Square, an image of Marinetti's lecture in Cairo in 1938, and copies of magazines such as Al-Tatawwur (an Arabic monthly periodical published by A&L between January and September 1940), as well as front and back covers of A&L exhibition catalogues. Such documents highlight the difference between the conservative rhetoric and art deco inspired visuals of the art establishment and A&L's exhibition practices and rhetoric, which advocated for the total freedom of art from political, religious and national affiliations.

One of the central pieces in this section is an original bilingual (French and Arabic) copy of the Long Live Degenerate Art manifesto from December 1938, a declaration which sought to condemn totalitarian forces in Germany and Italy that relegated modern art to degenerate art. It was circulated on the streets of Cairo and in periodicals across Europe, including Clé, La Nouvelle Revue, and the London Bulletin. Surrounding this are archival documents and visual documentation depicting the rise of local fascist forces, nationalist sentiments, and the destruction and anxiety caused by war, which propose a revisionist reading of this manifesto – that is, to consider it beyond a response to the rise of totalitarianism in Europe and to ground it within the Egyptian context. By doing so, the Nasserist nationalist narrative – which hitherto ostracized A&L as an alien and westernized artistic experiment – is turned on its head, thus accounting for the group and its movement's role in widening artistic experimentation within Egypt and beyond.

Indeed, one of the exhibition's strengths is the unearthing of important names such Mayo, Rateb Seddik, Laurent Marcel Salinas and Robert Medley, as well as the discovery of unknown photographers in the 'Surrealist Photo' section, such as Mohammad Abdel Latif, Mamdouh Muhamad Fathallah, and Abduh Khalil, who experimented with common surrealist techniques of solarization, photomontage and alienation. In L'Entreinte (1940), Ida Kar mocks the columns of Ancient Egyptian temples by using carcasses, bones and meat. What these photographs all have in common is a strong visual rejection of the Nahda (revival) paradigm and a critique of the nationalist iconography of Pharaonic Egypt. 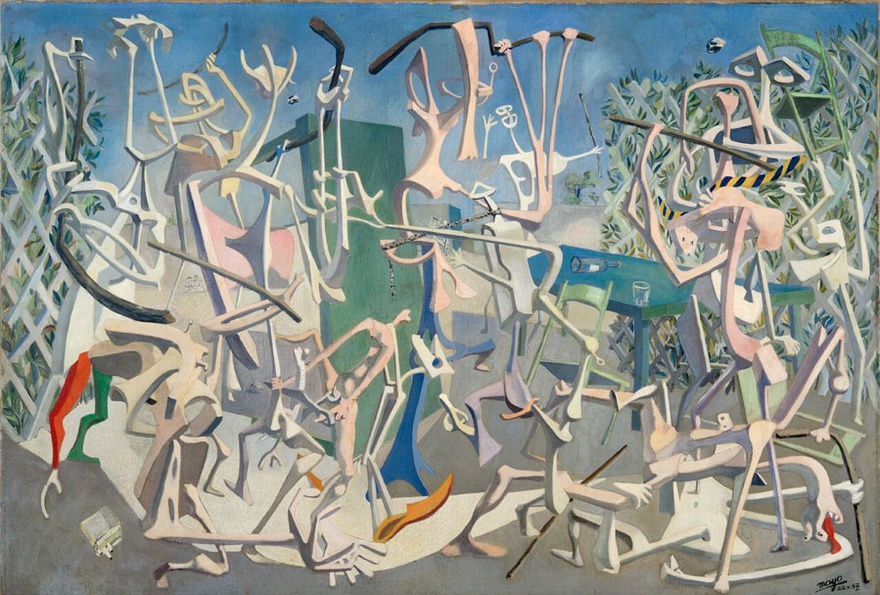 The engagement with Surrealism and quest for artistic freedom continues in a section that focuses on the Contemporary Art Group (CAG), founded in 1946 by Hussein Youssef Amin, Abdel Hadi El-Gazzar, Hamed Nada, Samir Rafi' and others. Although very rich in content, this excursion, which includes El-Gazzar's famous painting The Green Fool (1951), and Amin's Nude on Shell (1948), moves beyond the mandate of the exhibition. While early works such as Samir Rafi', Nudes (1945) – a large painting, with strong surrealist influences from Hieronymus Bosch to Dali, depicting a chaotic scene of nude bodies and animals in flight – dealt with surrealist themes of the subconscious mind and desire (some were indeed exhibited in A&L's shows), there is a strong pictorial and ideological rupture that takes places by the late 1940s between the two groups, when CAG began searching for an authentically Egyptian art. The latter is captured in a 1953 letter from Henein to Younane displayed in a cabinet, where he condemns the group as a mouthpiece of nationalism, though a contextual backdrop of British occupation and heightened anti-colonial sentiments that culminated with the 1952 coup d'état would have shed further light on this rupture. 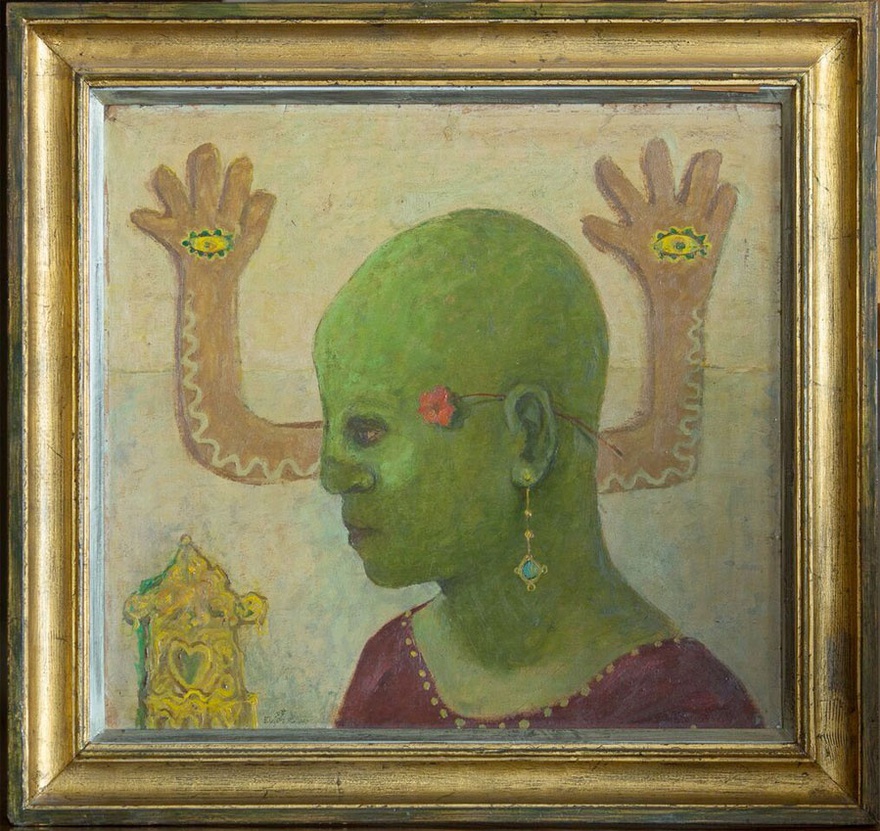 Nevertheless, the inclusion of this section on CAG together with the fact that works associated with the group are not confined to this dedicated area – appearing instead throughout the show – reflects A&L's openness to a variety of artistic trends and their operation as a heterogeneous platform. Similar to the way A&L included Mahmoud Said or members of the CAG in their exhibitions, Bardaouil and Fellrath aptly reproduced these fluid boundaries.

Elsewhere, through paintings, drawings and photographs as well as original copies of Al-Tatawwur and Don Quichotte magazines, Albert Cossery's novels, Georges Henein's poems and correspondence between members, the show pays heed to the various layers of pictorial and literary language fostered during this vibrant period in Egyptian art history. The strong dialogue between the literature and visual practices of the group culminates in the last section where, for example, Inji Efflatoun's Girl and Monster series from 1941 to 1942 depicts a bloody scene of mutilated body parts, which echoes Henein's poem A Contre Cloison about two lovers massacred during the war and whose separated spirits rise into the heavens. 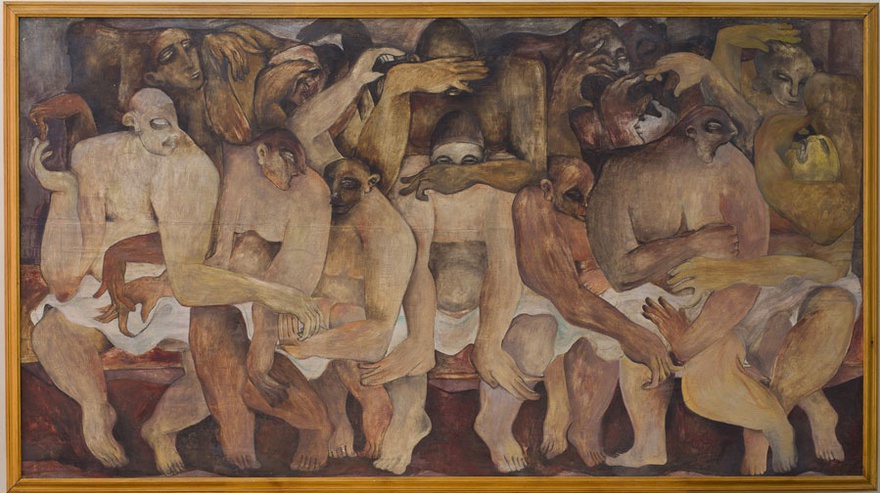 A violent reconfiguration of the human body, as in Amy Nimr's powerful skeleton series from the 1940s, evoking the loss of her son in a desert bomb explosion, is a strong thread that binds much of this exhibition together. The work reflects the rejection of the naturalism and realism advocated by the Academy among members of the A&L who took up the theme of 'le corps emacié' instead, using the deformed, contorted and fragmented body to depict the poverty, hunger, suffering and injustice that plagued society. The suffering prostitute or 'the woman of the city,' also expressed through this deformation, is a recurring theme, seen in the suffering and abused women of Kamel El-Telmisany's Untitled (Wounds) (1940), or Fouad Kamel's Untitled (1950), which denounce the deplorable conditions of women. 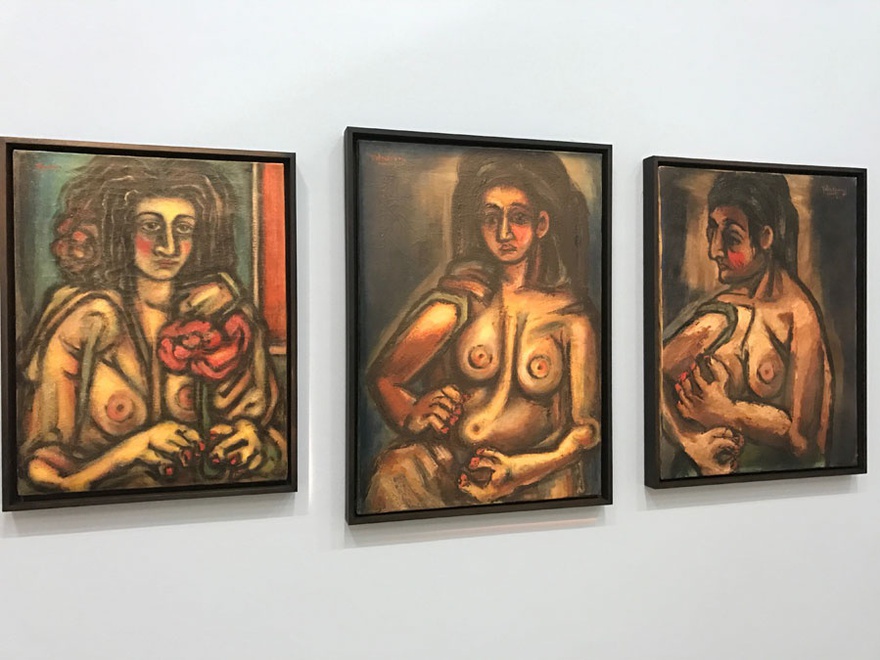 Another theme that emerges is best exemplified by Ramses Younane's notion of 'subjective realism,' embodied in his iconic painting Untitled (1939). The medium-sized painting, set in a desert landscape, depicts the goddess of the sky Nut – the symbol of life and protection – she is suffering, appearing almost crucified. Emaciated bodies and skeletons dot the scene; the language is surrealist, yet the context is very local: without making it nationalist, it conveys Egypt's suffering. Indeed, the image cuts at the core of the group's mission to create a visual and pictorial language that is internationally engaged yet locally oriented. 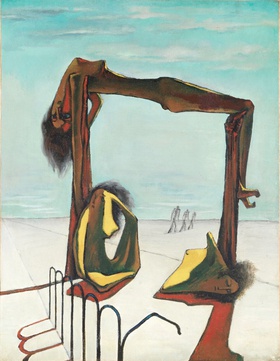 Younane and others recognized early on that Surrealism was in a crisis of orientation. In response, 'subjective realism,' used interchangeably with El-Telmisany's notion of 'free art,' called on artists to orient their subjectivity in the real world. These efforts to create a meaningful form of surrealism demonstrate not only A&L's criticality vis-à-vis Surrealism, but also its significance towards the evolution of Egyptian modernism. This exhibition proposes this criticality to challenge our predefined knowledge of Surrealism as a monolithic movement and urges us to come up with new visions of art history that move beyond binaries of center and periphery.

In all, Art et Liberté: Rupture, War and Surrealism in Egypt (1938–1948) powerfully captures A&L's entanglement in a multi-layered network of shifting hubs, which connected them to Athens, London, Paris, New York, San Francisco and beyond. By evading the slippery dialectics of Orientalism and post-colonial studies, Bardaouil, Fellrath and their curatorial team accomplish a renewed narrative to show how A&L appropriated, transferred, negotiated, responded and pushed the boundaries of local and global debates on art.

Amina Diab is a Ph.D. candidate in the Department of History of Art at the University of York, in partnership with Tate Modern. Her doctoral project, funded by the Arts and Humanities Research Council, is entitled "Re-displaying the Modern: A History of Art Exhibitions, Artistic Networks and Institutions in the Middle East and North Africa from 1930-1989." She holds a B.A. in History from the American University in Cairo and a M.Phil. in Modern Middle Eastern Studies from the University of Oxford.