Pattern Recognition at the Mosaic Rooms

Pattern Recognition at Mosaic Rooms in London presented the work of five Palestinian artists: Noor Abed, Inas Halabi, Majd Masri, Ruba Salameh and Somer Sallam, all of whom were shortlisted for the 2016 A.M. Qattan Foundation Young Artist of the Year award. The biennial prize provides a platform for early-career artists of Palestinian descent under the age of 30. From selection to exhibition, contributing artists were mentored by curator Nat Muller, who guided the artists in the development of their ideas so as to produce artworks[1] initially displayed in a traditional house in Beit Saa, Ramallah, during Qalandiya International in 2016. The exhibition then travelled to the Mosaic Rooms' more conventional gallery space in London, with six out of the original nine works presented in this smaller display. 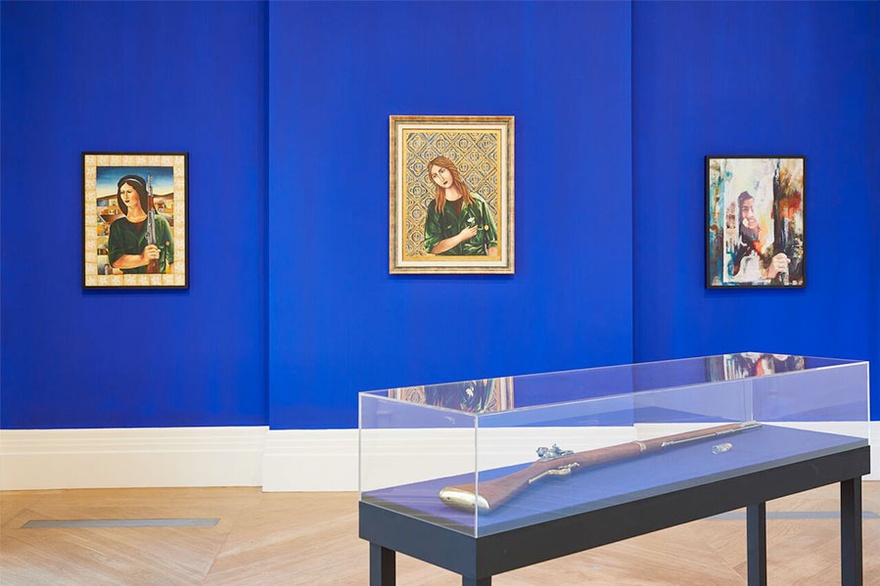 The exhibition's title offered artists a framework to dismantle and critique established and recognised patterns of the Palestinian situation, from the Nakba to their present-day circumstances as young Palestinian artists. The result was a group of works that expressed a unifying coherence, in which repetition was used as a tool to analyse authenticity, memory, place and time. 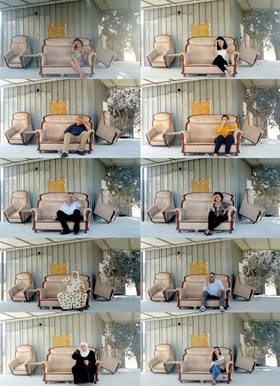 On entering the gallery, the first of three video works, titled Mnesmosyne, by the overall prizewinner Inas Halabi, played on a large projector screen. The film shows several of Halabi's family members recounting the story of Mustafa: a son, brother, father, grandfather, cousin and uncle who was hit by an Israeli bullet on the forehead near to the Lebanese border in 1948, and has since been left with a scar. Each family member sits on the same sofa placed outdoors and speaks directly to the camera, telling their version of events. As each narrator speaks, slight variations of the narrative can be heard to their reports: a comment on collective memory and how, while it is shared, variances can occur as histories are passed down through different generations. Halabi's documentation of collective memory can also be aligned with wider discussions on Palestinian history making, whereby the repeated negation of Israel has been used as a political act to legitimize the Palestinian narrative.

The work's title, Mnemosyne, refers to the Greek goddess of memory. The common thread throughout the film is the act of each family member wiping their hand across their brow in a reconstruction of the moment Mustafa realizes that he has been shot and is bleeding. This gesture is stitched onto a series of circular embroidered works that were placed on the wall adjacent to where the video was projected in this exhibtion. Several figures are depicted with their hands to their forehead, where a single strand of thread has been allowed to hang loose, possibly as a reference to the bloodshed. This may be a comment on the continuity of this tale, which has been passed from family member to family member; thus, it remains unstitched as the memory is still living. Opposite this wall were two more embroidered works: a golden outline of a man, which may be interpreted as representative of Mustafa, and a red bird.

Throughout the film, each sitter, once finished speaking, picks up a glass of water that is positioned by their feet on the ground and takes a sip before the next in line appears on the same spot on the same sofa. This water is a reference to the Lethe River of forgetfulness in Greek mythology. Yet, it is clear that the members of Halabi's family have not forgotten this tale. In an article in The Arab Weekly, Halabi explains that she has an interest in the relationship between the individual and the collective as well as the construction of memory and historical narrative.[2] In contrast to the media representations of Palestine, the deeply personal nature of Halabi's film honours the intimacy of her grandfather's tale, whilst paying heed to a collective history and struggle. 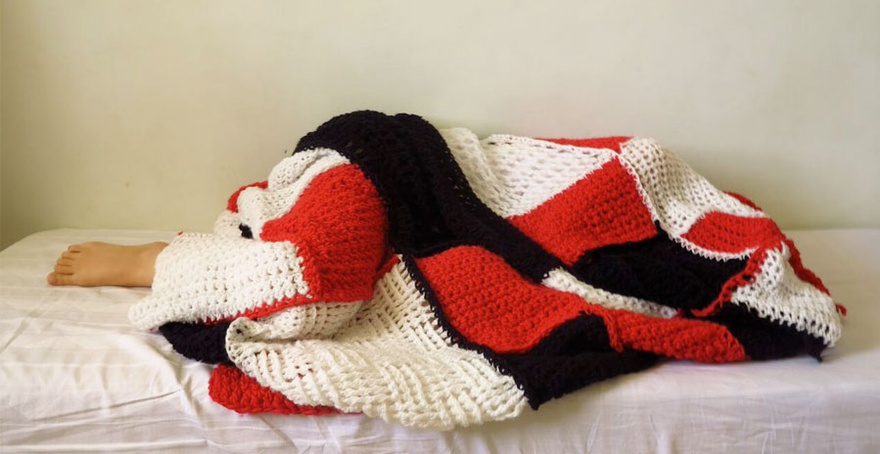 In the main gallery, a film by Somer Sallam titled Disillusioned Construction was presented. It shows a woman creating a patchwork quilt in the colours of the Palestinian flag. Like Halabi, Sallam's work employs a material aspect – here, crochet. The viewer is shown the whole of the fabrication process: from a ball of wool to a complete quilt, which then completely covers a woman lying down on a bed. The safety blanket then unravels, leaving the faceless woman exposed and without cover. This act is repeated over and over; a comment on Sallam's personal experience of displacement and her vulnerable position as a refugee, in which her national identity – represented by the colours of her flag – has become unstitched around her, leaving her unprotected and vulnerable. Her weapons of protection – wool, a crochet hook and several quilt patches – have been displayed, at a distance, on the neighbouring wall, perhaps in a statement of defiance.

Opposite Sallam's patches in the main gallery was Majd Masri's series Haphazard Synchronisations, whichresponds to a photograph taken in a Lebanese refugee camp in the 1970s of a female fighter with a flower between her lips, which has since become an iconic image for Palestinians. Masri reinterpreted the image repeatedly through six various guises in the form of six two-dimensional art historical styles, from a Greek icon to recreations of the portrait in the style of Sliman Mansour, Naji al-Ali and the poster art of the Palestinian Liberation Organization. Through the reproduction of the photograph in multiple configurations, Masri places the woman in the foreground, the jasmine flower bringing softness to what would otherwise be considered a masculine weapon. The recurring flower and gun that the woman is carrying throughout Masri's images was encased in the middle of these works inside a glass plinth, as though preserving the unnamed woman's memory. The display case functions in the same way as the wall art, in that it preserves the woman's image. What's more, by taking the woman out of the equation, the viewer is forced to contemplate the repeated symbols within these images and their juxtaposition. 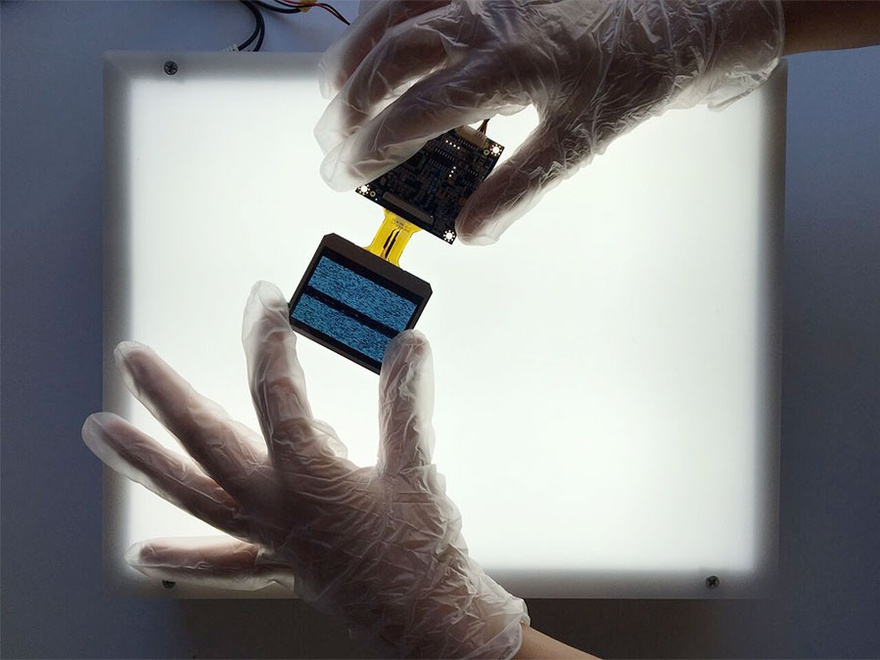 Noor Abed, The Air was Too Thin to Return the Gaze, 2016. Video still.
Copyright the artist.

In the downstairs gallery were works by Noor Abed and Ruba Salameh. Abed's The Air was Too Thin to Return the Gaze consists of photographs, videos and posters that offer a futuristic response to an unidentified flying creature spotted on 8 August 2015 in Bir-Nabala, northwest of Jerusalem. Abed's work documents the evidence and remnants of this event in videos of objects found at the site. Through the various parts of her installation, which includes the analysis of a memory stick located at the site that shields a flickering video, Abed dissects and documents unfamiliar memory, in an effort to understand this phenomenon. The film on the device appears to be unreadable, yet Abed attempts to make it recognizable. Just like a UFO, the forms that move across the screen are unrecognizable and don't appear to make sense, but Abed can be seen trying to piece this together in a scientific fashion, complete with forensic equipment and precautionary gloves in an act that is both archaeological in its discovery and futuristic in its dissection.

Around the corner from Abed's piece was Ruba Salameh's video, Yamm (Open Sea). The camera is positioned at a bus stop in East Jerusalem, facing a billboard of a fading image of the sea of Gaza. Salameh has reconstructed the washed out image by superimposing videos of sea on top of it like a huge digital plaster. The film observes a handful of travellers waiting for a bus: a businessman on the telephone, a group of women gossiping amongst each other and a man with 'good life' emblazoned across his t-shirt. Stationed at the entrance to this gallery, is a stand filled with postcards that have the billboard printed on top of them, from which the viewer can take a memento of the artwork. In this way, she can be sure, that even when the image on the billboard disappears completely, its passers by will have a small souvenir to remember it by; a gesture that also suggests access to Gaza's sea can only be realized through the mediated image.

Each of the artists who contributed to Pattern Recognition have asserted an acknowledgment of the system of repair and ruin in contemporary Palestine, while also attempting to move past this stereotypical dialectic by offering new perspectives that consider the lived patterns brought on by a history of ongoing political oppression. Through their work, the artists explore how Palestinian memory is constructed, preserved and presented not on macro scale, but rather through the minutae of daily life, from waiting at a bus stop to sitting down on the sofa with extended family, in order to retell not one, but many stories.

Pattern Recognition was on display at Mosaic Rooms from 20 January to 18 March 2017.

How I became a politician, or,
How theft turned me into an artist