Take Me to This Place, I want to do the memories

Atfal Ahdath is the moniker Lebanese artists Raed Yassin, Vartan Avakian and Hatem Imam, all successful as solo practitioners, choose to go by when collaborating. The name translates into 'Children of the Events', referring to Lebanon's 15 years of civil strife (1975-1990), a time when these three artists were growing up. It is no coincidence that this era is echoed in their chosen name. It can mean 'juvenile delinquents' and indeed, there is something wonderfully buffoonish, disposable and trashy in the projects of Atfal Ahdath – all qualities not immediately associated with the field of contemporary art. There is no aura or singularity bestowed on the preciousness of history and memory for these artists. On the contrary, both are makeable and reproducible.

Atfal Ahdath indicates an interest in the production and consumption of memory, history and how they find themselves as individuals and artists implicated in these dynamics. The delinquency of their projects is found in the fact that they copy, steal and recycle material from image banks and photo studios from all over the Arab world. These image banks are repositories for photographic templates offering those who cannot afford lavish weddings, exotic vacations or faraway travel, the possibility of having their portraits taken and subsequently photoshopped in such idealised and coveted settings. In this sense, these images are already – in essence – constructed, copied and recycled.

In their projects Avakian, Imam and Yassin query who has ownership of these images, which by association questions the ownership of the imaginary and of dreams. Moreover, they underline how the experience of temporality shifts: a memory is not something you have experienced in the past and recollect, but something that you manufacture for the future. In this case, memory becomes visual and social currency. 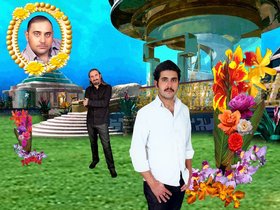 Atfal Ahdath, Take me to this place, I want to do the memories, 2013, online video, 4'36", video still. Courtesy of The Running Horse Contemporary Art Space.

For their first solo show in Beirut, Take me to this place: I want to do the memories at the Running Horse Contemporary Art Space (16th January – 16th February 2013), the three continued their research on contemporary photo studio practices in the Arab world. In particular, they focused on the practice of portraiture. But rather than approaching the topic as an exercise in media archaeology – where every item is carefully considered, contextualized and catalogued – they chose to approach it in bulk. They reproduced their findings in a way that challenges the representation of photographic form and technique, as much as it explored photography as a medium for fabricating fantastical and deconstructed scenarios.

This is particularly the case for Untitled Couples (2013), a series of twelve digital prints in various gradients of pink and red, each with an oriental decorative motif or floral pattern at the centre. A closer look revealed that these motifs are composed from the headless images of bridal couples; we see the surface markers of the nuptials – the bridal apparel and the studied poses – endlessly replicated. The multiple intertwining of these headless, matrimonial bodies produces an effect that is sexual, funny and slightly uncomfortable. What is supposed to be a unique event in a person's life – getting married – becomes generically reproduced as an ornament.

Uniqueness is not what Atfal Ahdath are after in the Untitled Couples series. These 'portraits' are faceless to start with and devoid of anything that would hint at the specificities of personal identity. Moreover, the whole idea of marriage being a singular union between two people collapses in the orgiastic entanglement of multiple brides and grooms. Still, the work highlights in hyperbolic fashion how desired subjectivities are constructed through visual representation. 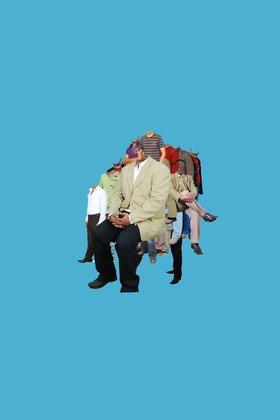 A similar strategy is found in the photo series Impossible Men (2011). Instead of the reddish backdrop of Untitled Couples, here a blue backdrop hosts the headless figures of groups of men dressed in a similar fashion: from designer suits, traditional Arab thobes, to low-end casual wear and ill-fitting polyester suits. The clothes of these 'impossible men' indicate their social class, serving as a reminder of how social ranking is accommodated by visual categorisation. Yet, even though these imagined men technically do not exist, the viewer automatically assumes and makes assumptions about their identity. What unites the Impossible Men and Untitled Couples series is that portraiture is studied by eliminating that which makes an image personal; namely, one's face. Ironically, in both series, the imaginary digital settings of landscapes and faraway locations are substituted by monochromatic backgrounds, thus making it impossible to actually 'do' the memories at all.

This is not the case for the vinyl stickers that make up Exercise in Becoming (2012), in which dozens of the artists' portraits are paired with the clothes of the Impossible Men, as if the artists have become paper dolls dressed by stock clothing: thobes, suits, and casual wear. The vinyl stickers are arranged in a mandala-like formation, which attributes a pseudo-spiritual quality to the piece. In this, the artists underline the process and the array of possibilities in becoming 'possible men' with the promise of a unique identity. Men who, as opposed to those imaginary figures in the Impossible Men series, can actually produce their own memories. The title of the work suggests that becoming a 'possible man' is not straightforward but requires exercise and trial. Further to this, the exercise in becoming, as performed here by the artists, also blurs the line between artist and art object; singularity and mass production. 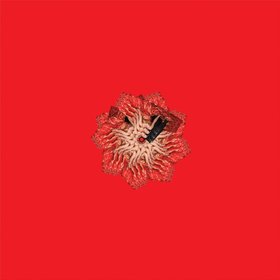 If Exercise in Becoming emphasises the relationship between photography, the individual, visual appearance and social class, then the installation Exploded View (Beirut Edition) (2013), underlines the importance of place as an idealised and utopian conception. At the back of a pitch-black room, a small diorama of 27 photographic cut-outs show the artists dressed in generic suits, surrounded by exotic flora and fauna and against a background image of a paradisiacal beach. Those in the know, however, will also recognise Beirut's iconic bullet-ridden Martyrs Statue in Martyr's Square and the clock tower of Nejme Square, both situated in Downtown Beirut, an area that has now been reconstructed after the civil war's havoc. It is an interesting comment on how, in places like Beirut, 'doing memories' also risks becoming an exercise in erasure and forgetfulness. The utopian image is somewhat disturbed by incorporating elements of real history and real memories.

Take me to this place: I want to do the memories transports the viewer to a realm defined by fabulation, social conditioning, photographic imaginaries and technical manipulations. By immersing us in these over-the-top visuals, Atfal Ahdath point out their artifice. \

'http://www.youtube.com/watch?v=8_vBhv9mo9s' is written on the gallery wall, sending the viewer beyond the confines of the exhibition space to a photo montage of the three artists in a variety of idyllic settings, poses and garbs viewable online. All this happens with a syrupy sweet soundtrack of melodious harps, tweeting birds and running water.

It makes perfect sense to introduce us to this work through the Internet, the most public of technological platforms. It allows for imaginary worlds to flourish. To an extent, the Internet, similar to photographic studio photography montage, permits people to be whoever they want to be through carefully constructed avatars or beefed up social media profiles, as long as they can produce their presence convincingly and as long as they skid the realm of reality.

For more information on the exhibition, visit http://therunninghorseart.com/exhibitions/details/3/28-take-me-to-this-place.