In a large black-and-white photograph, an older man looks out at the viewer. In a blazer and buttoned-up shirt, thin white hair neatly combed back, he holds a piece of paper with both hands. His expression is wary.

There are six other images of men, each photograph a meter squared and presented in grainy black-and-white. Each man is smartly though sometimes shabbily dressed, all looking, waiting, thinking; holding pieces of paper, maybe taking notes. The poses and attitudes of these figures, the subjects of Yasser Alwan's series Against All Odds (1996-2001), bear similarities to those of the art viewers looking at them in Cairo's Gezira Art Center, housed in a 1920s villa and temporary exhibitions are held in its basement, which is split into several low-ceilinged rooms. The photographs were taken next door at the horseracing track in the Gezira Club. 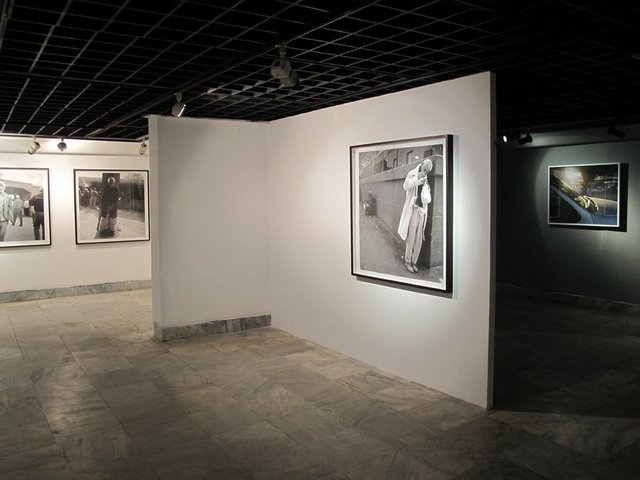 Alwan was one of eight artists or artist groups featured in Covering One's Back, a group photography show staged for just two weeks at the Gezira Art Center from 7th May to 23rd May 2013. The show was unusual because it was large, meticulously presented, and put together by two artists who are associated with Cairo's well-established 'independent' (non-governmental) art spaces, Maha Maamoun and Ala Younis. Yet the Gezira Art Center is run by the Egyptian Ministry of Culture. This made the show seem like a political statement: given the context of the space, it suggested that the governmental and the non-governmental in Egypt's art scenes are not mutually exclusive and that good shows can be put on at both.

The anxious gaze of the gamblers in Against All Odds was echoed in other works in Covering One's Back. Taiyo Onorato and Nico Krebs' rural Americana series The Great Unreal (2005-2009) mixes fabricated photos involving models and other special effects, invoking a certain uncertainty on the viewer's part about what they were seeing. The same was true of Raphael Hefti's Portrait of a Bullet (2009): 20 prints pinned directly to the wall with solid bullet-like pins. The images were made from negatives created in a ballistics-testing company, and according to the wall text show the invisible forces of speed and sound. However, the strange smooth texture of their grey surfaces made it extremely difficult to guess what was in the photographs. With views of sand-like ridges, watery ripples, and elegant patterns of what appeared to be silhouettes or openings, it was unclear whether these images were photographed up close or far away.

Heini Stucki's four large black-and-white portraits of men, Jimmy Schneider and other works, had similarities with Alwan's gritty images, yet they erred more towards humour. Each man was photographed in public space, looking at the camera, each portrait accompanied by a nearby table on which thirteen small black-bordered photographs, also monochrome, were placed under glass. They were badly lit by one spotlight and all placed the same way up, although the table was large. This meant that some images had to be looked at upside-down, and/or in semi-darkness. Gezira Art Center viewers thus strained to inspect thirteen photographs of what turned out to be people at an insect fair who, like them, were bent over cabinets, or examining small things in groups.

George Awde's six framed colour photos, each with men or boys in them, were the least static in the show. There was a dynamic fluidity was suggested by various light effects: reflections in water, glass and a metallic shirt photographed either at dawn or dusk, as well as haze, mist and unfocussed areas. The images were selected from two series centred around a group of Syrians in Beirut, Quiet Crossings (2009) and Shifting Grounds (2011). 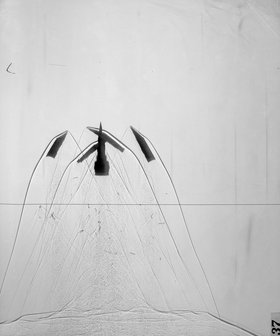 In the dark 14-minute video work G.R.A.H.A.M. (2008) by Hassan Khan, the late Cairo-based photographer Graham Waite's glinting gaze follows Khan as he moves back and forth behind the camera, a gaze that sometimes looks wary and vulnerable and sometimes sinister. He had been told to stay quiet but keep eye contact with Khan, who was apparently interviewing him about his life. During this single, silent unmoving shot, which is slightly slowed down, Waite, for a lengthy minute or so, looks down to roll a cigarette. This is perhaps a rebellious move, but definitely a shift in power: disrupting and highlighting the one-way, static gaze of both the art viewer and the photographed subject.

Goran Galic and Gian-Reto Gredig's compelling Photographers in Conflict (2006) explored the power relationship between photographer and subject in the context of photojournalists, who, in videos displayed on six monitors, answer questions about their practices while also appearing alongside these videos in the form of small portrait photographs. Speaking mostly about the pain of others in exotic places, they seem defensive, uncomfortable, self-conscious, posing, and endearing.

The exception to the general sense of wariness in Covering One's Back - a sense that is reflected in the curators' talk of a current need for caution and endurance - was the eighth and final set of works, placed in a room separated from the others by a long corridor. Atfal Ahdath's contribution did share the focus on male portraiture present in the works of Alwan, Stucki, Khan, and Awde (the only women depicted in the show were at the insect fair and the photojournalism festival). Take me to this place, I want to do the memories (2001) was colourful, jolly, kitsch, and self-conscious. The three artists making up Atfal Ahdath (Vartan Avakian, Hatem Imam, and Raed Yassin) pose in various settings, while in the same room, a neon sign was made out of the link to this video.

This brief exhibition, the accompanying three talks and one-on-one portfolio reviews that took place alongside the exhibition were conceived as a 'photography festival' by the Gezira Art Center, which has put on at least one, though quite different such festival before (it is difficult with government-run spaces to find an comprehensive list of previous shows). It approached the Swiss cultural organisation Pro Helvetia, which it has worked with previously, and who funded this exhibition. Pro Helvetia asked Younis and Maamoun to curate the show: the only guideline was that half the artists be Swiss. Galic and Gredig, Hefti, Stucki, and Onorato and Krebs are, but in the show their shared nationality isn't something you'd notice unless you were looking for it. 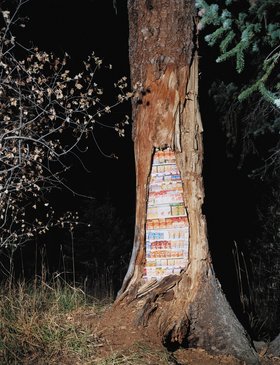 Both curators have a history of organising alongside making their own work. Younis is an artist, writer, and curator based in Amman, and Maamoun is a Cairo-based artist and a founder and board member of Cairo's Contemporary Image Collective (CIC). They met in Amman in 2007, and although Covering One's Back was their first joint project to come to light, various others are in the pipeline: soon they will launch a series of commissioned publications called Kayfa-ta (or 'how-to'), the first called How to Disappear by Haytham el-Wardany.

While the curatorial statement spoke of 'emotions that have to do with surviving a moment, a person, a situation,' Covering One's Back felt less like a group exhibition with a specific curatorial standpoint, atmosphere, or rhythm than a group of quite separately exhibited mini-shows, partly because works by different artists were exhibited separately. There was also little interrogation of the medium of photography that one might expect with a medium-specific show. Still, the lack of didactic sermonising made the show unique amongst other exhibitions with the same artist lists. This feature was likely attributable to the curators both primarily being artists: each work was shown for its own sake. Awde's work, for example, could be shown in an exhibition themed around migration or the Syrian civil war, but in this show those elements were allowed to be incidental as they are in real life.

Jenifer Evans is the English-language culture editor for Mada Masr and co-runs with Taha Belal an art production and dispersion outfit called Nile Sunset Annex, both based in Cairo.