The emergence of drones has, along with other advances in military technology, heavily affected the discourse on global conflict. The landscapes of the Middle East – the target of the so-called War on Terror – have been delivered to us via satellite imagery as harsh, inhospitable, and unmistakably foreign. Taken out of any meaningful historical or geographical context, these landscapes appear as mere abstractions. It is this sense of abstraction that underpins the work of the artist Jannane Al-Ani's most recent exhibition, Excavations (2014), at the Hayward Gallery's Project Space.

Featuring both moving-image installation and photography, Excavations interrogates the media representation and cultural constructions of conflict zones using techniques drawn from fields as diverse as archaeology and aerial reconnaissance. The exhibition forms part of the project The Aesthetics of Disappearance: A Land Without People (2007 – ongoing), in which Al-Ani explores 'the disappearance of the body in the real and imagined landscapes of the Middle East'.[1] Al-Ani's Excavations is made up of subject-less pieces: a land without people – a clear departure from earlier photographic works which first made a name for the artist back in the 1990s.

The works in the exhibition all involve an aerial perspective, implicating the viewer in an act of surveillance. The Jordanian desert landscape of Shadow Sites I (2010), a 14-and-a-half minute moving image work shot on digitized Super 16mm film, is shown to us from dizzying heights, accompanied by the drowning noise of a plane engine. As the camera angle and altitude shift subtly, it becomes impossible to get a sense of scale or to focus on any specific part of the landscape. The film features the marks of ancient structures and archaeological sites in the desert, made visible from the air when the sun is low in the sky and casts long shadows. This phenomenon, referred to in archaeology as 'shadow sites', gives the film its title. 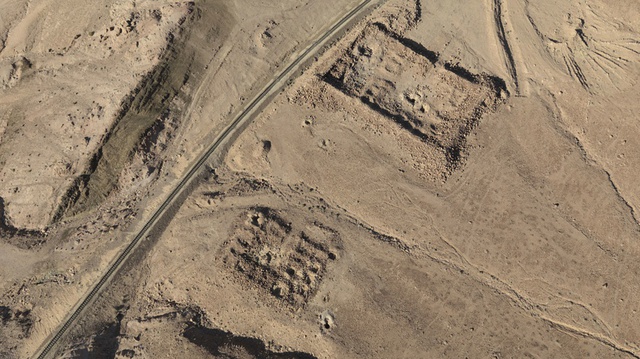 Al-Ani's engagement with the phenomenon of 'shadow sites' is a way of temporarily making visible what is latent in or on the earth in a given place, thereby attesting to what is otherwise omitted or covered up. In using these techniques, Al-Ani subverts the aestheticized, impersonal aerial image, making the landscape communicate to the viewer signs of the absented human population. The camera pans over the remains of ancient copper mines and First World War trenches in the Jordanian desert, where Al-Ani shot the film in 2004. The continuous movement of the camera prevents the viewer from ascertaining a sense of perspective, constantly challenging us to make sense of what we are seeing.

Al-Ani has cited an interest in artistic representations of, and engagement with, human atrocities and catastrophe as one of the inspirations behind this project.[2] In 2004, she came across the work of Margaret Cox, a British forensic anthropologist who discovered the sites of mass graves in Kosovo when seeking out a particular species of blue butterfly which lives in areas where the soil has recently been disturbed. Al-Ani emphasizes the importance of ambiguity in the artistic treatment of these spaces, so the abstractness of an aerial perspective emerges as one way that artistic practice can navigate the landscape of a conflict zone without reference to a specific event.

This approach is also manifest in Groundworks (2013), a multi-channel video installation in which aerial photographs of sites in the southwest of the USA have been subtly animated. Set in geometric frames, the photographs are taken from a mixture of modern and historic sites of human activity, from vast prison complexes and industrial farms to ancient Indian burial grounds. The animation of the photographs adds layers of colour and movement, blurring the line between moving image and photography.

Al-Ani intends to add further images to Groundworks which will be taken in the UK and at number of locations in the Middle East. She plans to use the same aerial perspective as in Shadow Sites I to create ambiguity about the source of her images; for example, a photograph of a beach in the UK could be made to resemble a desert site in Jordan. Al-Ani's desire to subvert our ideas of geography, history and archaeology, constitutes a critical cartography that proffers a rich and multi-layered representation of the landscapes she works with. Instead of seeing merely an arid desert in her images of Arizona, for example, the animated photographs in Groundworksshow us traces of civilizations, peoples and history, revealed through the optical illusion of the 'shadow site' technique. 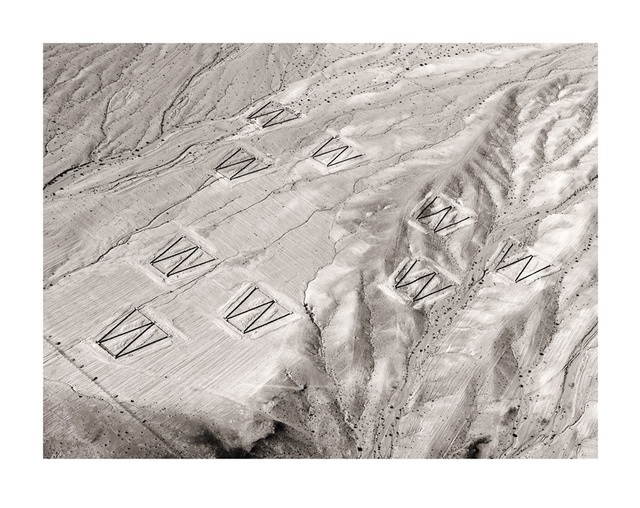 Another formulation of these aerial images is Aerial I-VI, a series of high-resolution digital prints of stills taken from the film Shadow Sites II (which is not featured in the exhibition). The barrenness of the landscapes in Aerial I-VI, and the light and shade in the photographs, recalls the eerie panoramas of German archaeologist Ernst Herzfeld (1879-1948), whose photographs of Iran and Iraq Al-Ani discovered in the archives at the Freer and Sackler in Washington DC when researching this project.

Where earlier pieces in the The Aesthetics of Disappearance project have dealt more literally with the omission of the body from the landscapes of the Middle East, such as the two-screen video work The Guide and Flock (2008), the deserted structures in the Groundworks photographs – some of which are so abstract as to resemble a Mondrian painting in terms of lines and composition – only imply the absent body.

The macro perspective that produces Shadow Sites I, Aerial I-VI, and Groundworks is reversed in the short film Excavators (2010), situated in the final room of the exhibition. Still looking from above (and this time more physically, as the piece is set in a free-standing plinth), we are brought down to the micro level, watching ants in the desert building a nest. As the only display of a living organism in the entire exhibition, the ants have multiple levels of significance: from an aerial perspective, human beings are often said to look like ants; so not only do they replace the presence of human beings, they also recall the human body, reminding us once again of the body's haunting absence in projections of the region's landscapes.

Jumanah Younis is Assistant to the Editor at Ibraaz.