Slavs and Tatars at The Third Line

More than giving meanings to things, and more than simply a form of communication, language is used as a method of control – a promotional tool for nation (image) building. It is also a vehicle to spread freedom and emancipation from the powers that be: government, religion, school, or parenting. In Language Arts, a solo show by artist collective Slavs and Tatars, a series of works from 2012 to 2014 brought together the collective's research on the mutability of language, its misreadings, transformations and interpretations, which steered viewers towards understanding the intricacies of language. The works, which employed humour and irony as mechanisms that speak of past narratives of oppression, from sex to cultural and religious taboos, were made out of diverse media and based on extensive comparative research of major and minor geographies. Language lay at the heart of it. On entering the white cube, it was Dil be del (2014), a bronze heart with a tongue wrapped around it, which spoke for the rest of the show as it sat quietly on a shelf up against the wall. 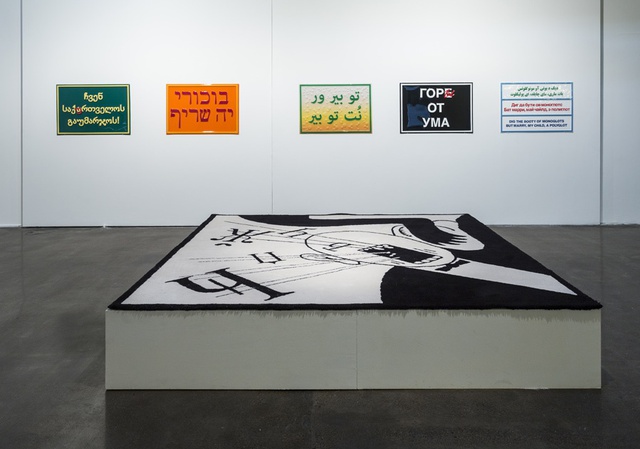 In their words, Slavs and Tatars resuscitate the histories that move them.[1] This was fitting for an exhibition where utterances and tongues – whether a mother tongue or many tongues – probed into the nooks of the past so as to expose lesser known narratives, or puns and innuendos in linguistics. The tongue flitted in and out of the exhibition, reminding us of its attachment to the mouth: the orifice where language thrusts itself in and out. Reflecting on this were two hand blown glass sculptures sitting on illuminated plinths Hung & Tart (full mauve) and Hung and Tart (split magenta) (2014), which were morphed into a mispronunciation of a heart and hook-like tongue, bringing to mind a fun and colourful tongue depressor and freakish probing device in one. 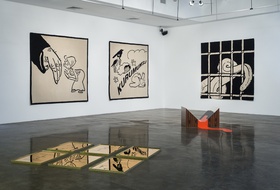 Within this exploration of the tongue was the positioning of the mouth as a political site. Four wool and yarn rugs from 2012 titled Love Letters (No.2), Love Letters (No.4), Love Letters (No.8), and Love Letters (No.9), hung together on two adjacent walls while the fourth lay on a low white plinth, which was made for lounging. They displayed illustrations after Vladimir Mayakovsky, a poet and Russian Futurist, depicting a man with a mouth wide open that cried out different Russian characters, while an adjacent hanging carpet evoked the tongue, licking and slithering on the bars of a prison cell. Indeed, there is a long history behind each object. Another carpet featured the word 'KURUMUMSU' slicing a woman in a hijab in half. Her torso, head and handless arms were confined to one corner of the image while two crows perched on her feet on the other, one peering at the other half of her body, guts exposed, while guillotined hands lay on either side. 'Kurum' means 'institution' in Turkish, reflecting on the fact that in Turkey, the changing of the language script from Arabic characters to Latin characters in 1929 intended to separate language from religion, superficially secularizing the people. Hence, the depiction of a woman cut off from the language she knows.

The objects that Slavs and Tatars made to visualize the politics of gender, sexuality, language and its suppressive or uplifting qualities were assertively displayed in this heavily-hung exhibition. For instance, Never Give Up The Fruit (2012), made of hand-blown glass watermelons hanging from rope and secured to a wooden lattice shaped like Chinese script looked to Xinjiang, a region in the west of the People's Republic of China. The script pointed to the story of a young girl, Khoja Iparhan, who was kidnapped for her captivating scent, and gifted to the Qianlong Emperor of the Qing Dynasty. Tales of this narrative vary,[2] however, Slavs and Tatars recall it as Khoja Iparhan refusing to submit to the Emperors desires, and therefore not giving up her chastity, or her fruit. This collision of interpretations of histories, media, context and object was what constituted the core of Language Arts. The work, like the exhibition, was a clash of aesthetics: the delicacy of the fragile hand blown watermelons hanging from rope, tied to a wooden frame, juxtaposed against the mythical tale that recounts the value in a woman's Godly loins. Depending on who tells the story, she either gives it up or maintains her purity despite the Emperor's lustful advances. Either way, the rope could unravel and the glass could come smashing down, reminding us of language's slipperiness and instability, which raised a number of questions. If the artists choose to 'occupy the far ends of the spectrum'[3]as they have mentioned before, was the artwork keeping up to the collective's claims in this exhibition, namely, the emancipation/exploitation of language? 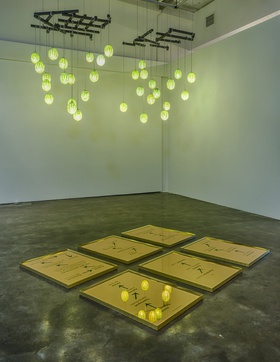 In 'Language Arts,' the combination of disciplines kept things at once specific yet non-committal and distant: the act of looking and thinking through one work to the next reflective of a lateral approach – practiced by Slavs and Tatars – to art making and knowledge production. There was one isolated space in this exhibition in a quiet, darkened upstairs room of the gallery space, illuminated only by green Dan Flavin-like lights – evocative of Slavs and Tatars' work inspired by Dan Flavin's 1982 installation at Masjid al-Farah in New York. Two sheets were draped in the space: one in Arabic script, the other in Latin script, with the words printed upside down: 'SELF – MANAGEMENT BODY – YOUR FATE IN YOUR HANDS'.[4] Two speakers on either corner played recordings of poetry originally written in Polish and translated to Farsi being sung, bonding the histories of Poland and Iran from eighteenth century Sarmatism – who the Polish nobility claim to be descendants of – to the Green Movement in Iran. The room seemed to appropriate oriental imagery, but in fact appears more as a method of reclaiming this imagery. It was a moment of pause: a tranquil, meditative moment removed from the binge of tongues, colourful scripts, and menacing glass sculptures in the gallery space below.

As an exhibition, the unity of objects, texts, textures, and sounds worked in a network that built on what we have seen from Slavs and Tatars before, reflected in the collective's research on the politics, religions, myths, and histories affected by language scripts. The result was a subversive antithesis to the institutionalization of language, achieved through a radical approach, however polite, that maintained a devotion to the narratives being resuscitated around the institutionalization and political reform of language.

[4]The quote translated from Polish to English refers to the 1989 demonstrations in Poland against Communism. 1989 marks the revolutionary period in communist countries in Eastern and Central Europe. http://www.slavsandtatars.com/about.php?id=43