At the 41st Aeschylia Festival

The old oil and soap factory in Elefsina – the Elaiourgeio – was among the first industrial units to process olives and produce soap in Greece when it was built in 1955. After the factory was decommissioned, it became the home of the Aeschylia Festival, an event now entering its 41st year and named after Elefsina's most famous son, Aeschylus. As the tradition goes, every year the Elaiourgeio becomes a site for an artist to intervene: a sprawling, crumbling, post-industrial complex located in a city best known as the ancient site of the Eleusinian mysteries dedicated to the cult of Demeter (the goddess of the harvest, who lost her daughter Persephone to Hades, the king of the underworld). The narrative that defines the Eleusinian mysteries is classic. It involves a descent into the underworld, a journey or a search, and finally ascension into the world: a rebirth, or return.

Such a cycle seems to have informed the design of Tarek Atoui's 2015 Elaiourgeio offering, which included three performances staged on three separate occasions with a host of invited sound artists, as curated by locus athens (Olga Hatzidaki and Maria-Thalia Carras). The first performance by Atoui took place on the 3 September; and the second, on 12 September, featured Atoui with Acte Vide (Danae Stefanou, Yannis Kotsonis), ARTéfacts ensemble (Theo Vazakas, Marios Dapergolas, Spyros Tzekos), and Panos Alexiadis. The third and final performance, which was staged on the exhibition's last day, featured field recorder Chris Watson, who collected sounds around Elefsina with and for Atoui, and Japanese instrumentalist KK Null. The score was divided into three sonic chapters, each representing an area in which Watson had collected sounds: the coast of Eleusis, which leads up to the bay of Salamis; sounds from in and around the oil and soap factory; and sounds from the archaeological site. With Watson taking the central soundboard for the two-hour performance, Atoui and KK Null added to the central composition with their own sonic interventions. 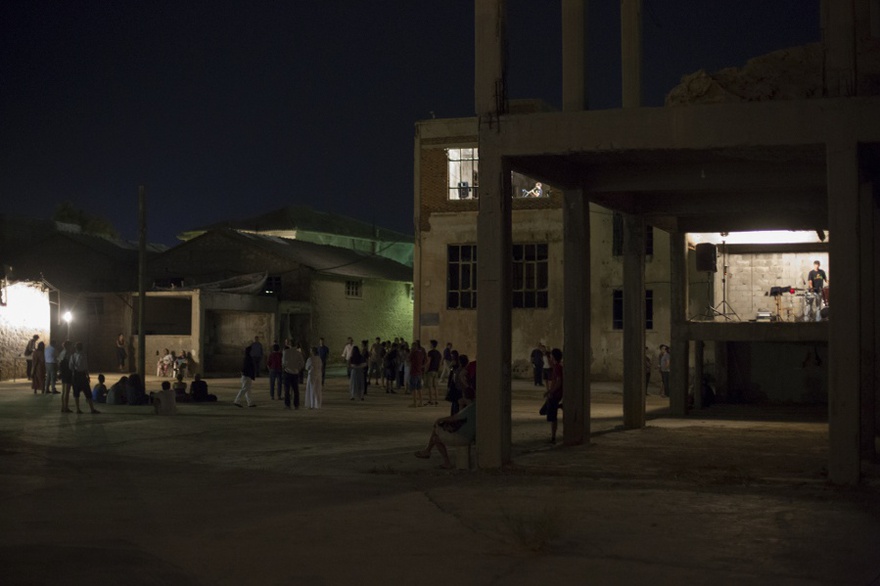 At the outset, Atoui invited those sitting in the amphitheatre constructed for the exhibition to walk around as the performance went on. I took Atoui at his word, and wandered through the site as the performance got underway. I stood at the top of the amphitheatre as the sounds of Salamina came through and watched the docked ships in the bay as they became drawn into another perspective by the noise coming from behind me. It was as if they, too, were taking part in the performance. The effect was the same for everything I saw, from a wooden hut teetering on the edge of a concrete warehouse, to the working factory viewable in the distance, to the underbelly of the metal amphitheatre, where most of the speakers were positioned. Sound, in this respect, drew an expansive and moveable frame around the present moment – something Atoui is apt at producing, given how he thrives on collaboration and contingency above all else. The result was a sonic carpet that activated the Elaiourgeio site and the surrounding environment, thick with references to the longue durée of history. As the sun disappeared and darkness took over, groups started to gather around the soundboards, watching as each performer contributed to the composition.

The effect was haunting. It recalled the 2010 Elaiourgeio project by Greek artist Diohandi, who created a journey through eight chambers of the factory complex that mimicked the ritual of the Eleusinian mysteries. This particular intervention was minimal; the artist used light, sound, and materials found within the Elaiourgeio's labyrinthine complex. In one room, wooden beams that appeared to have fallen from a dilapidated ceiling crosshatched into the form of a post-industrial forest, shadows cutting across walls. In another, red light bathed the space, visible from the outside through a window. The effect was precise: the space was enabled to speak for itself. Experiencing Atoui's performance felt almost identical in the way it managed to activate the complex without intervening too much into its physical composition. The success of this minimal approach was marked by how the experience is recalled: more a feeling of presence rather than a concrete memory, but vivid all the same. 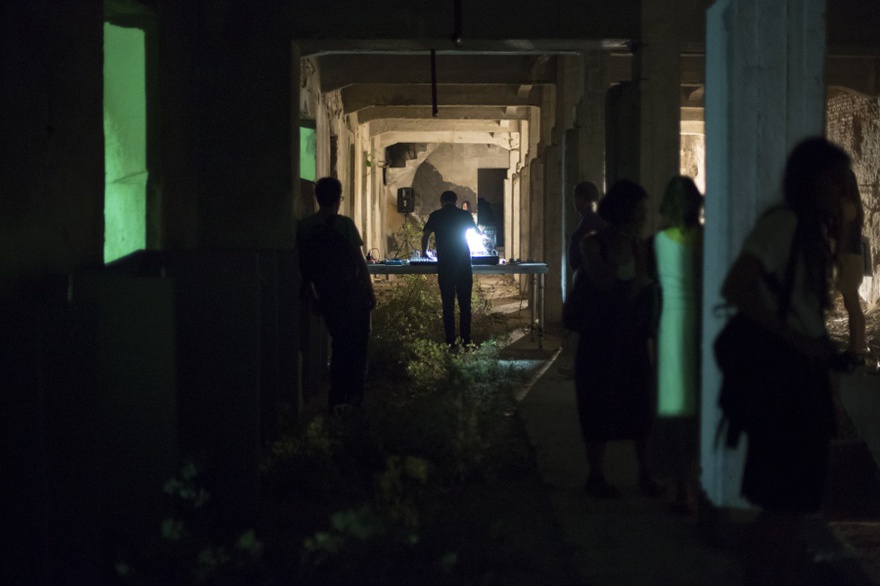 You might say that Atoui's was a brave presentation. Aside from these performances, there was barely any work in the Elaiourgeio's chambers, save for a single crate in one. In this, a sound recording is played alongside a 'score' comprised of images and descriptions of the sounds collected by Watson; things like 'Beach 1, 2 and 3' at the 0.05 second mark, or 'helicopter and fly inside Demeter well' at the archaeological site of Eleusis at 10 seconds. The crate itself is part of an ongoing work: I/E (2013–ongoing) – what Atoui calls a 'collective instrument' that acts as 'a studio space, a listening station, and a performance platform' in one. The idea is that multiple musicians can use such an instrument, which explains why the real meat of Atoui's Elefsis offering was in the live performances. This was the moment in which I/E was activated in real time and space.

Read Tarek Atoui in conversation with Stephanie Bailey in 2014 here.