Artists use sampling techniques all the time. Hany Rashed, a Cairene self-taught artist, based Bulldozer (2015) entirely on Facebook users' profile pictures, painting portraits on plastic sheets and layering them with visuals he collects online. Architect-turned-artist Mohamed El Maghraby created his moonwalking bunny in Searching for Rabbit Man (2015) using an online dance tutorial video. Egypt's 2015 Pavilion in Venice was on the other hand a disappointing result of this approach as participating artists aligned Astroturf covered panels to read the word 'Peace' when viewed from above, and wired them to tablets playing a customized video game. So what makes Sounds as if, an exhibition inspired by the sampling sensibilities of Musique Concrete and how we experience ideas, visuals and sounds outside their familiar environments, an interesting proposition? 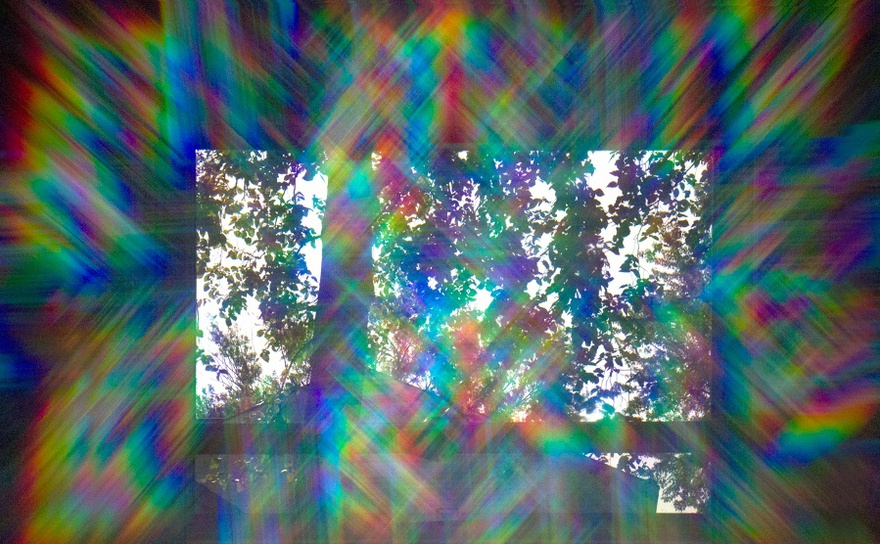 Curator Aleya Hamza selected six works with unique sampling approaches for the exhibition, showing until 25 April 2016 as part of the 5th Downtown Contemporary Arts Festival (D-CAF) in Cairo. Every piece on display at the Old French Consulate Building, the Kodak Store, and Bassiouny Shop, which have been renovated into pop up art spaces during the festival, also offers visitors an auditory experience. Magdi Mostafa's sound sculptures Elements of the Unexpected (2016), offer a remake of a 2012 project with the same title, which Mostafa produced in Dubai. It consists of three industrial dough mixers that reflect Cairo's economy as much as they did for Dubai, if not more since the machines are still commonly seen in local bakeries. Instead of using readymades as he did in Dubai, Mostafa custom-made the mixers from recycled parts of military vehicles dating back to the Soviet era – a design that was commonly produced in Al Sabteya neighborhood, but fell out of fashion in favour of newer materials. Al Sabteya craftsmen who built the mixers for Mostafa went further and dotted the machines' bases with striking red paint as if grooming a bride's toenails. Mostafa then filled the machines with molasses and set up a sound system that amplifies their roaring and rumbling.

Two films included in the exhibition also tackle sound in interesting ways. Doa Aly's House of Rumor (2016) presents us with an auditory overload. A four channel video projection, all working simultaneously, it shows two groups of performers reciting verses in a hypnotised fashion, while a leading male and female figure seem to be delivering more of a blatant speech. Performers read excerpts Aly selected from a range of philosophical and creative texts including Laboria Cuboniks Manifesto on Xenofeminism and Sarah Kane's 4.48 Psychosis – her final play before committing suicide, as well as Google translations of those plays and A Mujahid's letter to his wife. But as viewers we can hardly make out what the performers are saying. We only pick up snippets before feeling exhausted, which seems to be the artist's goal as she simulates the experience of political commentary in Egypt over the past five years. 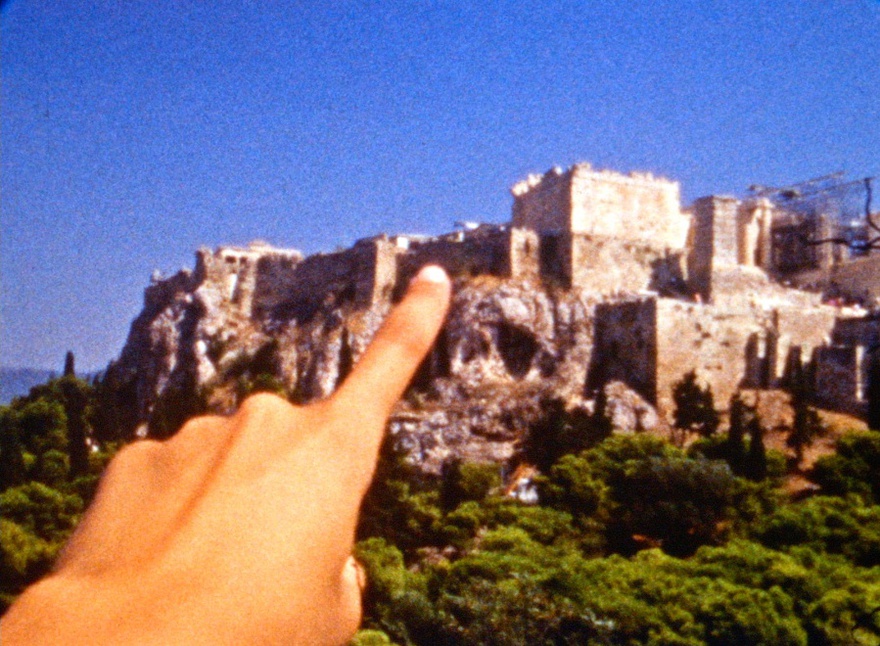 The soundtrack of Deep Sleep (2014), a film by Basma Al Sharif, on the other hand, is among its most striking elements. It is simultaneously entrancing and irritating with stops and gaps interrupting an escalating beat. For this project, which the artist undertook over the span of an entire year, includes visiting monuments in Greece, Malta, and Gaza while in a self induced state of hypnosis. The soundtrack is made entirely of field recordings. We hear the sirens, a rhythmic sound of a moving train, birds and wind being modulated into a beat. And in one scene, Al Sharif appears making a recording in what seems to be the Acropolis. It is the only scene where we see the artist instead of her moving feet or index finger directing us through a dream like world with a fiery colour palette.

28th Color (2013–15) and Amgad's Project (2016) by Joe Namy and Ahmed Sabry respectively combine text with image, albeit in very different ways. Namy, the only artist showing his work at the Kodak gallery presents a series of photographs he had shot in his hometown, Detroit. The city as seen through his lens is deserted and in a state of ruin. Texts accompanying each image come into play, evoking a sad sense of tranquility. Personal reflections are combined with excerpts from philosophical texts he read at the time, allowing each viewer to imagine a muffled narrative. In one photo, Namy quotes artist Moyra Davey saying: '...surround any image with type and it takes on an allure, an authority, provokes a desire it might otherwise not have'. 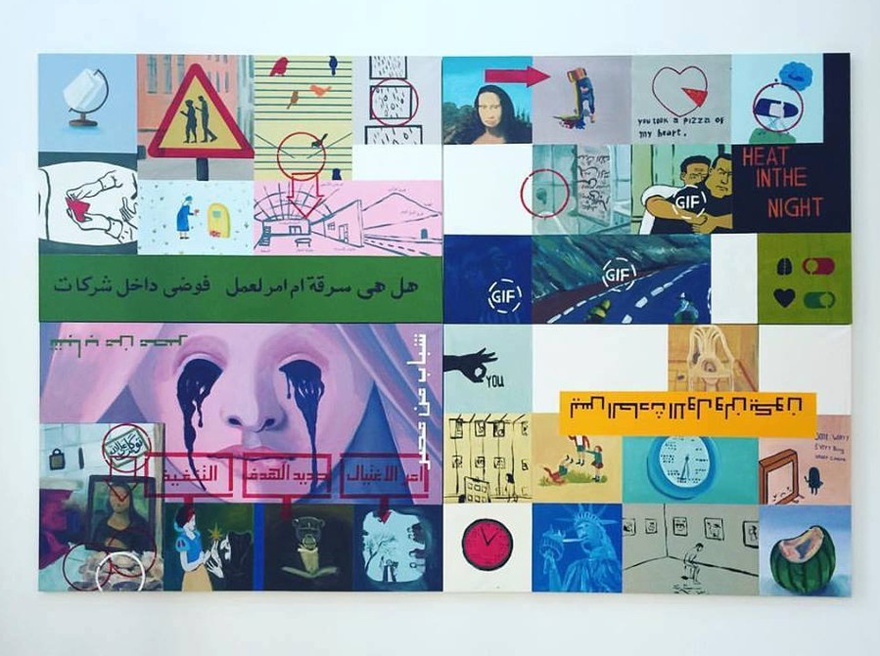 Amgad's Project can be considered an exploration of Davey's quote, if only by accident. The mural-like painting occupies an entire wall at the Old French Consulate Building and is inspired by a satirical Facebook page. It is divided into panels and illustrated in a comic book style, presenting fictionalized snapshots of contemporary events in Egypt. One panel shows an ironed shirt dreaming of a day by the lake next to another reading 'Heat in the night'; another shows a naked artist pooping on the gallery floor. In Amgad's Project, Sabry pushes a playful approach in dealing with text and image which he developed in The True Story of Mohannad's Death (2011) painting series, in a more exciting direction, as the images are no longer standalone moments, but are integrated into a unified work. The sonic experience of Namy and Sabry's work is perceived rather than heard, with the latter being much louder.

Perhaps the subtlest work in terms of the possible auditory experience it offers as well as humour is Ahmed Badry's latest sculpture in The Provisionary That Lasts series (2014–ongoing). It is a three-meter high toilet bowl with a kitchen faucet hanging from above and is shown at the Bassiouny Shop. The unusual design is an example of the solutions people improvise to overcome daily problems such as inadequate water connections and supply in the city. Often mistaken for an industrial product or the work of a 3D printer, the sculptures in this series act as a proposal for new tools designed by the public. All of the pieces are however handmade from cardboard by Badry. Their design, size and production manage to stir a unique mix of curiosity and humor among viewers. Accessible to a wider public as it is exhibited in the street level Bassiouny Shop, the sculpture has been stirring strong reactions from the festival's crowd as well as customers of the next-door coffee shops from admiration to questioning to outright fury at devoting the shop to a giant toilet bowl.

These auditory experiences, both real and perceived, are a major theme of this exhibition, connecting what might otherwise seem like a highly interesting yet unrelated group of works. Merging with the sounds of Downtown Cairo, a neighbourhood that despite the turmoil and curfews it has witnessed since the 2011 revolution truly never sleeps, the exhibition seems to extend beyond the galleries into the streets connecting each of the three venues.