X-Apartments, a project by Matthias Lilienthal, took place in Beirut as the opening act of the festival Home Works 6. It was but another of the many site-specific installations X-Apartments has produced; others have taken place in Vienna (2003), Berlin (2004), Istanbul (2008), Sao Paulo (2009), Johannesburg (2010), Warsaw (2010) and Mannheim (2011), among others. After a year of teaching in the Home Workspace program of Ashkal Alwan, Lilienthal, together with former students originating from Syria, Egypt, Iraq, Lebanon, Kuwait, Germany, France, Netherlands, UK and Poland, produced what was approximately a four-hour tour of various apartments in Beirut neighbourhoods with audiences organized into groups of two, with Phil Collins and a group of students of KHM Cologne also invited to collaborate. In this interview Lilienthal discusses the X-Apartments project in relation to Beirut.

Göksu Kunak: Since X-Apartments engages with the city it travels to, I wanted to know about your first encounters with Beirut in terms of performance art and daily life, which may be considered a performance in itself?

Matthias Lilienthal: Before coming to Beirut I was quite familiar with a generation of artists including Walid Raad or Lina Saneh. That was the reason why I came here. One of the ideas was to introduce students with traditional performance arts that differ to what has been established in the city. Considering daily life, it is everywhere in the world of performance. If one is in Talin, Berlin or Beirut, it is not important at all. What is quite different is Arab hospitality; I have met with people who are eloquent in this way, compared to other countries. On the other hand, the value given to general and daily appointments in Beirut is another significant point.

GK: Whilst digital aesthetics are gaining more and more importance, you value the domesticity of the household. Why?

ML: X-Apartments is more about this face-to-face communication. I'm also working on projects that are dealing with the digital era, such as projects on computer games and how they could be translated into performance. 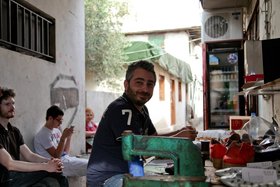 I, myself, am an old man. I'm fascinated by this idea in X-Apartments that private reality is always surprising. For instance, in one of the apartments in Khandaq Al Ghamiq, there was a feminist lady, Zeynep, who was soon to get married. Photos of a march were hung on the walls, and at the same time her apartment was reminiscent of a well-designed lifestyle; a kind of patchwork. Nevertheless, people are not clichés as the media has represented. There was this backyard in Khandaq Al Ghamiq, where Zeynep was living, and Romain Hamard had the idea of turning it into a kind of film set. On the first evening, we thought the elderly people in the neighbourhood might feel uncomfortable but, on the contrary, lots of people came. A lady from the next-door backyard who had not spoken for years because of Alzheimer's started speaking! There are always such things happening that one would not expect at all. The project is mainly based on the question of surprises.

Another essential element is that, of course, Zeynep's backyard constituted a voyeuristic situation. In that backyard, there were twelve elderly people and two visitors. For me, it is always important to arrange every tour with just two people. So in this specific performance, old ladies were always the majority. It was never clear if this other lady visiting was a hipster from Istanbul or Berlin; or a bobo from Achrafieh, Beirut. Who is watching whom? This is totally important for me because the project can easily become cynical or voyeuristic in a bad sense. Of course, intrinsically, the project plays with his; I try to establish a specific environment.

GK: How does - as you note in an interview with Makiko Yamaguchi for Guerilla Semiotics - 'freeing the works from the theater environment' affect the work?

ML: X-Apartments is not an hour-long performance and not based on Shakespeare. I like when the artists react to a private reality. In the tour of Bourj Hammoud, there was an installation about Klashin Boghos. Monira al Qadiri edited a lot in that space: did a photo shoot with him, printed his photos on the cushions; his apartment became a merchandising shop of photos of himself. It was all generated by the artist. However, the majority of visitors and some critics assumed that this is how the apartment originally looked. I like when one cannot know what is original or fake and to play with this borderline. I should also point out that in almost all the X-Apartments installations, the people who are residing in them and how they behaved were the direct usage of the reality.

GK: In a city where sectarianism is discernible, going into the Armenian neighbourhood gains more importance. What criteria did you use tochoose the spaces/houses in the tour? 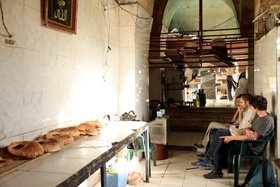 ML: The choice of one of the quarters, Bourj Hammoud, was made because I was very much interested in that part of the city: the old refugees from Turkey that came a hundred years ago and the new Syrian refugees. Practically, it was also a good choice: Bourj Hammoud is one of the easiest neighbourhoods to walk in Beirut. Besides that, resident families have lots of appealing stories. The choice of the apartments was mostly reliant on the captivating stories of the inhabitants. After visiting 30 to 40 apartments, the choice was made with the students.

GK: How would you describe the difference of X-Apartments in Beirut compared to those that took place in other cities?  Berlin, Istanbul, Sao Paulo, Warsaw…

ML: This time, mainly young visual artists worked on X-Apartments. Furthermore, I think Beirut is a city with extremely different neighbourhoods. There was no such variety in the cities we have been until now. Here, there is Dahieh, Bourj Hammoud, Khandaq al-Ghamiq, Christian and Shi'ite quarters and enormous differences in between.

GK: In your projects you also give a particular importance to working with minorities or the suppressed…

ML: I have always intended to do so. But what we really couldn't succeed in doing in Beirut and what I would love to focus on is the question of maids in one of the installations. The cleaning ladies working in Lebanese homes mainly take care of the children and do the cleaning. They have a special situation because of their engagement with a public agency. They also have to give away their passports. Besides the low salary, there is lots of violence against them in Lebanon. Sometimes one starts to ask these questions in the middle of everything. Probably, it would have also been easier to work on a project like this with people having a theatrical background.

GK: In one interview with Spiegel Online you claim that the world is changing quickly and German theatre should adapt itself to this shift. How would you describe this velocity, this shift? 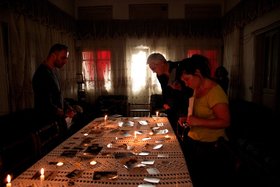 ML: In my opinion, the performance scene in Beirut is at an excellent level at the moment; dealing with the subject of the Civil War and the critique of images. The question is what to focus on next? The younger generation is concatenating their works more with the neighbourhoods or with other corporealities, like sound. In terms of German theatre, it is having a distance from the classical repertory and not serving just to the middle class; to contemplate theatre more like a social service; to involve international contents and aesthetics. In the art world today, for example, it is totally significant to confront the transformation of ethics in life as a consequence of new technologies. We have to forget the fights of yesterday, examine where the conflicts of this new society are and consider how art should deal with it.

GK: Personally, which would you prefer: the walking habits of a flâneur or a situationist?

ML: The flâneur. One of the aims of X-Apartments project is to lead the visitors to become a foreigner in one's own city. This kind of bohemian attitude is not visible anymore. The flâneur observes the reality around us. By walking on the streets one can immediately see the dramatic change in society.

Matthias Lilienthal studied theatre, history and German studies. He started his career in theatre in 1979, and has since worked as artistic director in Theatre Basel and the Volksbühne (Berlin), collaborating with directors and artists such as Frank-Patrick Steckel, Achim Freyer, Christoph Marthaler, Johann Kresnik, Michael Simon, Stefan Bachmann, Stefan Pucher, Andrej Woron and Armin Petras, as well as his good friend Christoph Schlingensief. He was manager and artistic director of the Hebbel am Ufer theatre in Berlin from 2003 till 2012, collaborating with artists such as the collective Rimini Protokoll, Constanza Macras, Chris Kondek, Hans-Werner Kroesinger, Mette Ingvartsen and Jeremy Wade. Under Lilienthal's directorship, HAU was named Theatre of the Year by the magazine Theater Heute in 2004, and in 2007 won the German Design Award for its campaign with Neukölln boxers. Lilienthal is currently the resident producer of the Home Workspace Program 2012-13, Ashkal Alwan's arts study program in Beirut; Lilienthal is also curator of the Theater der Welt festival in 2014.