At London's Institute of Contemporary Art (ICA) in December 2014, Dutch artist Renzo Martens presented and discussed a series of slides depicting sculptural self-portraits by artists in the Democratic Republic of Congo (DRC). The sculptures were made from chocolate and exhibited at the Artes Mundi Biennial in the Welsh capital Cardiff (24 October 2014–22 February 2015) and the exhibition Confessions of the Imperfect at Eindhoven's Van Abbemuseum in the Netherlands (22 November 2014–22 February 2015). Each portrait, Martens explained, was made in collaboration with the Institute for Human Activities (IHA) established in 2010 on a former Unilever plantation 800 kilometres from the nation's capital, Kinshasa. The works were scanned digitally and then printed as three dimensional reproductions with the assistance of Franco-Belgian chocolatier Barry Callebaut. The choice of material references the production of coca on Congolese plantations and the IHA's ambition to integrate into the European market demand for luxury commodities. Small sculptural heads can be bought for around £30, whilst larger works are sold at a price reflecting the valuation of art exhibited in well-known European art institutions. The sales of the sculptures will generate revenue directly for the artists and IHA for the first time. 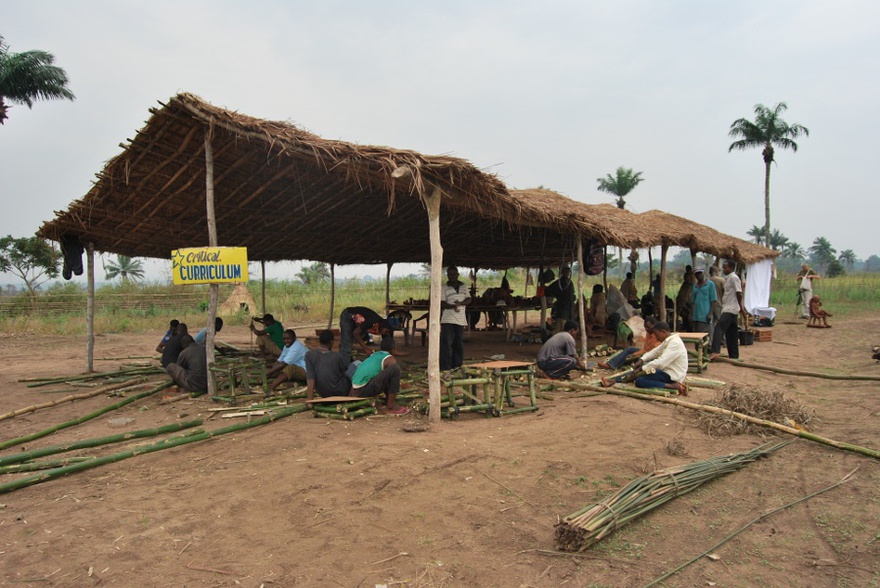 The IHA supports local artists including former plantation workers who, when Unilever sold the land in 2009, had no access to clean water, electricity or sanitary facilities, and whose salaries were no more than $1 USD per day.[1] Martens is interested in the ability of institutional structures to effect development via the cultural sector. Take, for example, Unilever's support of the Tate Modern's Turbine Hall installations in London since 2000. The annual commission – in theory – supports significant development in contemporary artistic practice; offers the British public and tourist industry the opportunity to experience cutting-edge contemporary art for free; and supports many aspects of the current economy, including regeneration of the surrounding area through the provision of consumers for local businesses. Part of the IHA project therefore is a 'Gentrification Programme' designed to attract lucrative investments, capable of coupling cultural growth with the financial industry, to one of the most impoverished areas on the globe. Martens has also consulted experts in social and economic development including author of The Rise of the Creative Class, Richard Florida, who suggests that creativity's assimilation of the free market can encourage stability and affluence for all.[2] Mega museums are built, retail and commodity markets thrive, Florida's 'high bohemians' earn a competitive wage. Geopolitical disjunctions, such as those evident in Unilever's activities between the DRC and London, are referred to by Martens as 'market failures'.

In negotiating contemporary art's instructional structures, the IHA has been usefully associated with previous models of institutional critique beginning in the 1960s, which creatively interrogated the representative politics of museums, institutions and galleries in reference to their social role as sites of knowledge production.[3] Yet, as critic T.J. Demos has recently pointed out, the IHA differs from many western models of institutional critique in that it attempts to connect the impoverishment of labourers to international markets via contemporary art's focus on global inequalities.[4] Martens is not so naive to ignore that gentrification has prompted significant class divisions and unequal distributions of wealth in many global centres including London, New York, and, more recently, cities such as Istanbul. The marketization of culture has regularly inflated rental prices forcing low-wage individuals and families out of their communities. Artistic practices tend to be judged by their ability to sell, prohibiting creative innovation by measuring success on its ability to match market trends.[5] The project thus operates on a two-fold level. On the one hand, economically oriented strategies that identify social regeneration with the emergence of creative industries are taken seriously and seen as a legitimate method to integrate poverty-stricken communities in sub-Saharan Africa into the global economy. On the other, the project both identifies a trend and draws attention to contradictions implicit to the image of poverty, providing material for many politically-engaged art practices and their frequent failure to effect real change for the disadvantaged. The IHA can therefore be understood as an attempt to rethink how art production might confront its multiple dependences on economic inequalities. A troubling target may therefore be the attempt to bring participating artists up-to-speed with Western capitalism's much-disputed contemporary marketization of culture.

At the ICA, Martens did suggest that he was not particularly in favour of capitalism as a model for social progress. Richard Florida charged $7,000 USD for a Skype appearance during IHA's inaugural seminar in 2012 – a bargain in comparison to his usual requirement of $80, 000 plus two first-class aeroplane tickets to appear in person and talk for one hour, according to Martens. One identifiable flaw to Florida's commitment to social development may be that his model to raise citizens' economic and living standards appears unavailable to the most impoverished, certainly when weighed against the cost of consulting relevant experts. In a video played by Martens at the ICA presentation, he invited his audience to 'meet' the chief of one community receiving around $19 for 26 days work. The footage shows a number of crumbling domestic structures, during which the chief reveals that his wages are not enough to live on. A portion of fish, he informs the camera, is $2.

The choice of language – to 'meet' the figure in the footage – also serves to inform a distanciation that Martens has confronted elsewhere in his artistic practice. In the 2008 videowork Episode III (Enjoy Poverty), the artist visits the DRC to investigate various situations in which Congolese nationals are exempt from networks that otherwise claim to challenge and reduce inequality. For instance, a group of European photojournalists are featured, selling images of Congolese poverty for around €50 each. Upon training local photographers to photograph similar scenes Martens and his recruits are told that their images are worthless, as poverty cannot be seen to be profitable for the poverty-stricken.[6] The IHA has similarly faced difficulties integrating with industries built on a claim to confront poverty. In 2013, Unilever's successor, Canadian agricultural company Feronia, chased the IHA off the original site, blocked public roads, destroyed the building hosting the IHA and confiscated many artworks. According to Martens, the institute didn't fit with Feronia's idea of social development and the person responsible for signing the lease for the original site to the IHA was sacked and placed under house arrest. During an hour and a half discussion in regards to the IHA presence on the land, Feronia's representative was careful to couch reasoning for their dismissal in legal vocabulary rather than expressing any cynicism for the project's creative strategy. Yet for a company that celebrates it's ability to improve the quality of life in the communities where it operates, and also receives development funds from the UK government, ambiguous legal implications preventing a model for progress based on mimicking the operations of a thriving global art industry do not seem quite good enough.[7] Market fundamentalism, after all, has little time for projects that do not offer instant financial return for shareholders.

The IHA is not without very real risks. It is unlikely that Martens' daring and controversial actions will diminish his growing reputation in the critical space of contemporary art. If the initiative works, contemporary art will be shown to have more political power than currently given credit for. If it fails, Martens may find himself reverting to the position taken in his 2008 film and hopelessly compel the poorest Congolese to Enjoy Poverty, as alleviation in the current political economy is far from likely.

It is important to avoid thinking about the Institute of Human Activities as Renzo Martens' artwork. In May 2013, I saw Martens give a presentation on the IHA at the Centre for the Study of Contemporary Art at University College London. On this occasion Martens appeared to dip in and out of a performative role, and in my view at the time at least, appeared to be consciously referencing tokenistic behavioural traits of a business pitch. It seemed as though he was trying to sell the idea to the audience in the way a salesman would sell an idea to an investor. In short, I saw the project as being related in some capacity to performance. The artist's works do implicate the audience in a way that insists on the experience of viewing art to be political. Frequently, Martens compels the viewer to experience a profound discomfort that he feels is lost in many contemporary practices and institutional settings. That is, a situation whereby many contemporary artists negotiate the image of poverty in creative and aesthetically innovative ways. Yet far too regularly the framing of such artworks in exhibitions confirm rather than relieve inequalities evidently inherent to the market economy. At the ICA, Martens appeared more sober, more affected even by recent developments. He was keen to note a history of exchange that had compelled his interest in the impoverishment of the DRC. His native Belgium's postcolonial relationship to the DRC, fetishism for 'primitive' artistic forms that reach back through some of the most well-known artworks of the nineteenth and twentieth centuries in Europe all play a part in his research. However, Martens seemed to gently insist on his position as artistic director of the collective project rather than singular practitioner. He acknowledged that his success as a white European artist positioned him best to obtain funding for the initiative, however he also expressed the hope that one day the IHA would be able to function successfully without him. What's really at stake in this project then is a testing of neoliberal capitalism's central ideology: that the free deregulated market has the ability to accumulate wealth for individuals regardless of their social status.[8] Perhaps one of the IHA's aims to partially bridge the gap in educational facilities that would otherwise expose a major blind spot in an ideology that invests so much in the entrepreneurial spirit of the contemporary subject. At the same time, however, material implications matched with a growing international interest in the project may, in the very least, help to undo the now widely contested fallacy that social progress is synonymous with neoliberal capitalism.

[2] Richard Florida, The Rise Of The Creative Class: And How It's Transforming Work, Leisure, Community And Everyday Life (New York: Basic Books, 2002).

the Aesthetic of Administration to the Critique of Institutions,' in October 55 (1990): pp.105-143; for a discussion of institutional critique's various stages until present, see Hito Steyerl, 'The Institution of Critique,' in Art and Contemporary Critical Practice: Reinventing Institutional Critique, eds. Gerald Raunig and Gene Ray (London: MayFlyBooks, 2009) pp.13-19.

[7] In regard to Feronia's strategy, see the company's website: http://feronia.com/About/Vision/default.aspx; in regard to financing of the UK government see their News Releases section: http://www.feronia.com/Investors/News-Releases/News-Release-Details/2013/Feronia-Inc-Announces-US25-Million-Private-Placement-Led-by-CDC-the-UK-Governments-Development-Finance-Institution/default.aspx.

[8] Naomi Klein's The Shock Doctrine: The Rise of Disaster Capitalism (London: Penguin, 2008) remains one of the most potent and devastating critiques of neoliberal political ideology since the 1970s.

Tom Snow is writer and PhD candidate in the History of Art Department, University College London. His current research focuses on tensions between social movements, critical art practice, and the neoliberal institution, with a particular focus on Istanbul between 2009 and 2013.