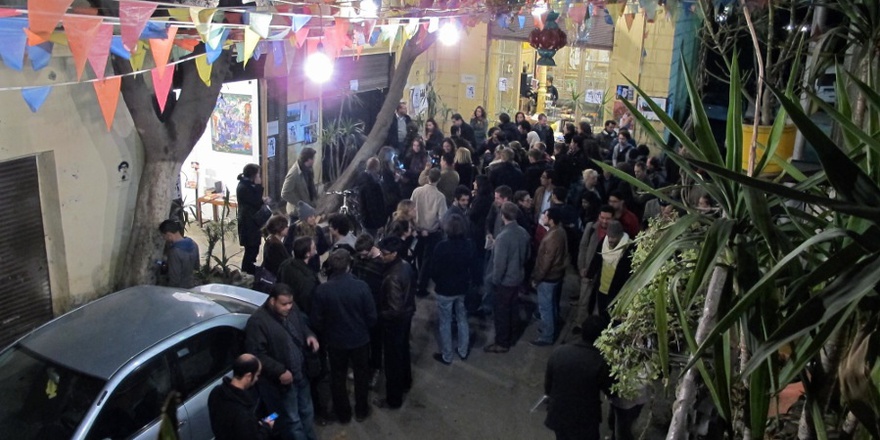 How do curatorial practices adapt to social and political change? What does it mean, in practice, to work on cultural programming in a state of permanent precarity? On 6 October 2015, London's Serpentine Galleries director Hans Ulrich Obrist hosted a talk with William Wells, founder of Cairo's Townhouse Gallery, around flexible curatorial practices in times of instability. Reflecting on current struggles and recent transformations, the discussion tracked back over the history of the pioneering non-profit art institution since its foundation in 1998.

Over 16 years, Townhouse became a hub and a meeting point, even outside of its walls, as it deeply influenced the social composition of the neighbourhood with its traditionally male-dominated coffee shops and mechanics workshops, said Wells during the discussion. 'Initially, artists thought that exhibiting at Townhouse would be detrimental to their audiences but in the long term it proved a successful bet.'

Townhouse has expanded and restored its strategically located premises, which now include the Rawabet Theatre and the Factory Space, and the new annex Townhouse West in Cairo. It has established partnerships with international institutions and networks worldwide, offering young artists, curators and writers the opportunity to develop their practices, be introduced to different audiences, and take part in long-term research and exchange programmes including the on-going Edgware Road project, an extended collaboration with the Serpentine.

Engaging with the local community is part of the outreach and educational mission of the institution, but also a strategy to continue working in the area. It is an unspoken rule that nearly all public activities in the city, regardless of their official legal status, need be negotiated not only with the authorities but also informally with residents, landlords and business owners. 'We worked with lawyers who helped facilitate the legalization of the nearby coffee shops and a pool of artisans were hired regularly by the gallery as well as occasionally by artists, so a small economic microcosm started to develop in the area, that at times even resulted in collaborative artworks between artisans or artists themselves,' Wells said.

Townhouse has become a powerful agent of social transformation. Initial suspicion and pressure by the government, which manifested in occasional intimidations, eased with the years and with the expansion of Townhouse affiliates, the launch of new independent art spaces, and the general acknowledgment of art's commercial and touristic potential. Yet, in the early 2000s 'a combination of external forces such as the availability of satellite channels and the spread of the Internet contributed to a new visual language: artists' work attempted to be somehow literal and provocative,' Wells noted. Townhouse had to let authorities know what this art was all about, he explained, 'but we had no idea how they would respond.'

Prior to the uprisings that began in 2011, Wells pointed to multiple examples that highlighted how art and culture positively engaged with political action, including highly provocative public performances such as Amal Kennawy's The Silence of the Lambs (2009); and participatory projects such as Susan Hefuna's solo exhibition Vitrines of Afaf (2007) that showed personal domestic objects chosen by the women of the neighbourhood; as well as the Complaints Choir (2010), part of the Invisible Publics programme curated by Sarah Rifky. Each generated strong reactions from both the authorities and the public.

Like all the existing cultural and artistic initiatives, especially those located in central Cairo, the Townhouse had to rethink its position and role as an institution during the 2011 uprising and in the years that followed. Exposure to censorship, threats of closure and all kinds of technical and logistical failures (such as having artworks held for clearance at customs control for weeks or months, sometimes delivered to galleries' doors five minutes prior to an opening) are very common. These are structural challenges experienced by everyone involved in the cultural sector within the country.

Yet, maintaining a traditional programme disconnected from the events that have unfolded since 2011 has never been an option. This has to do with the level of involvement Townhouse has with the community (artistic or otherwise), and secondly because of the institution's proximity to Tahrir Square. In several instances, tear gas fumes reached the gallery and staff had to be evacuated. The dilemma of whether to continue with the programme despite the dramatic events presented itself repeatedly. Nevertheless, Townhouse adapted to the unpredictable pace of events and sought to provide a safe space for meetings, discussions and political organization.

'At the same time, artists would put down their tools and their cameras and start to engage in different forms of activism,' Wells recounted. 'Artists and collectives engaged in very political work, yet often outside of traditional political forms of organization. They mobilized to provide medical and logistical aid to protesters, document police violence for forensic examination, and advocate for equality and freedom of expression.'

As Wells pointed out, the main difference since the pre-revolution period is that the regime now has the support of a greater proportion of the public and, despite its strong ties and strategic connections with the community, Townhouse remains in a precarious position. This is the case with most art initiatives in Egypt due to a combination of issues, including funding. 'The introduction of the new NGO law in 2013 changed everything and now the threat of closure is incumbent.[1] But it hasn't stopped the majority of the institutions and cultural initiatives,' Wells noted. Gypsum Gallery, artist run Nile Sunset Annex, and public space and participation-oriented Mahatat, are some examples of how new models and collaborative practices continue to emerge and develop within the Egyptian scene, despite the unpredictability of the political situation.

If a decade ago the limited choices meant choosing between state institutions and a few non-state spaces such as Townhouse, now artists and audiences have a much wider pool to pick from. Meanwhile, Younger organizations have been interested in differentiating from traditional institutional models such as Townhouse, reaching out to different audiences and forming networks with initiatives in neighbouring Arab countries, Africa and Asia, creating partnerships that move beyond the traditional Euro- and American-centric partnerships.

At the same time, many art practitioners have left Egypt out of despair and frustration for the deterioration of the political situation. As Wells noted: 'Many have retreated to their studios and avoid engaging in public collective activities anymore. They felt a distance in relation to their city as if they were in London or New York so they preferred to move.' In the case of younger generations of artists, many of whom have remained in Egypt, Wells observes: 'Their work is much more introspective, often coming from a space of contemplation or isolation. They are simply looking at different subjects.'

Townhouse has just opened a new branch, Townhouse West, in the satellite city of New Cairo, targeting a completely different audience: upper class, wealthy people living in gated compounds. Townhouse West hopes to attract a new audience of collectors that have recently developed an interest in contemporary art. The space could have the potential to become a powerful stakeholder in the Egyptian art market and a potential future patron for non-profit cultural institutions. A glaring issue here is the fact that many upper class Egyptians have traditionally supported the same regime that oppresses freedom of speech and critical discourse in the name of maintaining Egypt's reputation.

Wells does not deny the contradictions that run through this new location, since satellite cities are conceived and built from scratch on a topographical and social tabula rasa developed by real estate developers. Representatives from SODIC, a company working on the development of New Cairo, asked Wells to 'build a community' around the art space to increase the property value and in exchange they are offering temporary financial support for the original Townhouse institution in Downtown Cairo. You might call this a practical solution to an impractical condition defined by ambiguity, unpredictability, and precarity.

Laura Cugusi was born in Sardinia and lived in and out of Cairo since 2008. After completing her studies in media theory and social sciences at the University of Bologna and Santiago de Compostela, she has been involved in multiple research projects focusing on irregular migration via the Mediterranean Sea, and on mapping informal urban practices in Egypt, which she worked on in collaboration with the American University in Cairo and the Cairo Lab for Urban Studies, Training and Environmental Research respectively. Together with Lina Attalah and Nida Ghouse, she co-founded the independent research based art collective Take to the Sea. They exhibited in Manifesta 8 in Murcia (2010), the Hydrarchy show at the Contemporary Image Collective in Cairo (2012), the Yogyakarta Biennale (2013) and had their first solo show in Cairo at Nile Sunset Annex in 2013. Her writing and photography have been featured in several publications, among others Ibraaz, Nafas Art Magazine, Canvas, Mada Masr, Jadaliyya, Egypt Independent, The Exorcist (Van Abbe Museum), PhotoCairo5 Catalogue, "E ntry Points. The Vera List Center Field Guide on Art and Social Justice" (forthcoming) and "Dissonant Archives: Knowledge Production and Contested Narratives in the Middle East".