A Slavs and Tatars Panel Discussion at Art Space Pythagorion

It was on the occasion of Slavs and Tatars's latest exhibition, Long Legged Linguistics (27 July-10 October 2013) at Art Space Pythagorion, in Samos, an island that sits on the border between Greece amd Turkey (separated by the Aegean sea), that a lively panel discussion moderated by curator Marina Fokidis took place on 6th August. Ilker Aytürk, Political Science Professor at Bilkent University, Ankara, Konstantinos Tsitselikis, Professor of Human Rights and International Law at Macedonia University and Adnan Yildiz, Artistic Director of the Künstlerhaus Stuttgart, had been invited to talk with Payam Sharifi of Slavs and Tatars so as to, in Fokidis's words, 'raise new questions, matters and concerns' while facing 'unaddressed issues.' 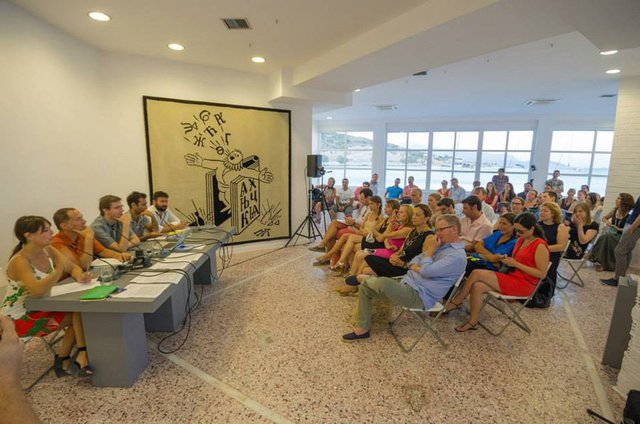 What was under discussion was the instrumentalisation of language as a unifying, or indeed, homogenising force. The panel began with individual presentations, starting with Aytürk's thoughts and observations on the Slavs and Tatars project, which explores how language has been used, changed and even bastardised within the geographical region delineated as 'an area east of the former Berlin Wall and west of the Great Wall of China,' or: Eurasia. One 2011 publication the collective has produced as part of its ongoing research presents the covers of satirical early-twentieth century Azeri publication Molla Nasreddin (1906-1930), read all across the Muslim world, and on which three versions of the Turkic script – Arabic, Latin and Cyrillic – can be found. On one of this periodical's covers, a row of Azeri students stand with their tongues stuck out, awaiting the 'anointment' of a new language (read: Russian) represented in a man holding a large tongue before them. 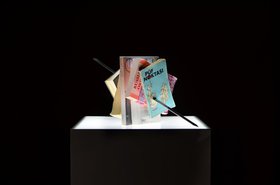 Slavs and Tatars refer to the Turkish language conversion of 1928 – when, under the reforms of moderniser Mustapha Kemal Atatürk, Turkish converted from Arabic to Latin script - as 'the most successful case of language conversion in the world'. What is interesting about this nugget of history, Sharifi noted, is that today, there are no calls in Turkey to revert back to Arabic script. Around this, Ilker Aytürk's presentation explored the relationship between language and nationalism, with Aytürk noting how 'before the eighteenth century, nationalism didn't exist.' Rather, there were a number of peoples – the Jews, Greeks and Han Chinese, for instance – with a 'very sophisticated sense of ethnic identity.' He continued to explain how nationalism is a modern idea defined by the notion of 'one nation under one, political rule.'

Slavs and Tatars' research, which seeks to revive old language ties while tracing how language can and has been used to enact imperial rule, was inverted somehow in Aytürk's presentation. Here, though the homogenising qualities of language are recognised, language is also shown as something that can bind an autonomous nation and become the embodiment of a nation's spirit. In the second presentation, Adnan Yildiz furthered this by showing the audience a monument commemorating Karamanoğlu Mehmet Bey's historic decree of May 1277 that Turkish rather than Persian was to be used in government offices. Yildiz saw the monument as a curious one; from one perspective also a reflection of kind of moment in which the language expressed 'on the street' - the vernacular - becomes popular and enters into state infrastructure. Given that language is another way societies come together or identify themselves, Yildiz also linked the issue of image politics with that of language politics, noting how languages can also define futures. 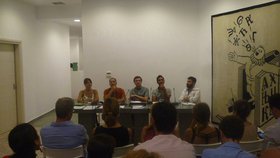 Konstantinos Tsitselikis spoke next, opening his remarks firstly with an acknowledgement of how 'challenging' it is to 'combine theoretical research with expressions of art,' as is the case with Long Legged Linguistics. Tsitselikis proceeded to bring the discussion back to its context: Samos, a Greek island that borders Turkey. It is also an island located in a region that, as Tsitselikis noted, had no borders for thousands of years. Rather, there were cultures co-existing in the Mediterranean: Armenians, Slavs, Turks, Greeks and Tatars, for instance – divided yet living together: 'different groupings among themselves.' Towards the end of the nineteenth century, Tsitselikis explained, language acquired more importance as a dominant cultural marker for so-called 'strong nations'.  In the age of nation building therefore, language became a method of homogenising what Tsitselikis referred to as 'the internal space' within a nation's borders: a space in which culture, national identity and society are formed, negotiated and essentially regulated. 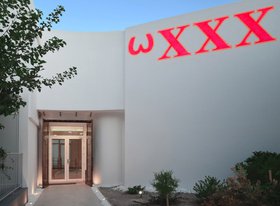 The segregating force of nationalism was explored in what happened between Greece and Turkey in 1923, when the great population exchange saw the expulsion of some 1.5 million Greeks out of a burgeoning Turkish Republic, and 500,000 Turks were in turn expelled from Greece. Tsitselikis emphasised how this was the first time in history such an exchange had taken place by law. The only people exempted were the Greeks of Istanbul and the islands of Imvros and Tenedos, and the Muslim Turks of Thrace. Today, there are still Greek-speaking Turks and vice versa, Tsitselikis said.  Likening such terms as 'Greek' and 'Turk' as brand names, he concluded that there is an 'importance to understand the layers and hidden identities in the mono-ethnic.'

Finally, Payam Sharifi offered his thoughts on the preceding presentations, thinking about the issue of complexity and how, 'at some point in history' there are moments when people need 'to rally around language.' In thinking about language scripts, Sharifi asserted a potential and a flexibility to 'break down the "one nation" ideology,' through language. As he noted, quoting an article by David Damrosch titled 'Scriptworlds' – 'scripts are never learned in a vacuum' and as such, could act as 'progressive tool'. Highlighting the function of language as an emancipatory force, this view ultimately raised the question of how such a proposal translates into reality. It was an issue posed by assistant curator at Art Space Pythagorion, Orestis Agiropoulos, during the question session, in which Agiropoulos effectively asked: what is the efficacy of this kind of project in terms of providing solutions to the issues raised? Sharifi explained that providing answers was not an artist's job. Adnan Yildiz offered a final comment, defining the Slavs and Tatars project as a patient attempt at creating 'a kind of perspective.'