In Roman mythology, Janus is the spirit of transition; of beginnings and ends. Legend has it that he was able to see into the future and the past at the same time. God of the origin of time and guardian at the gates of heaven, Janus is commonly depicted on ancient Roman coins and city gates as two-faced, looking both ways. He was traditionally worshipped at the onset of harvest seasons, financial ventures or new historical eras, as well as on the occasion of births and marriages; the passage between rural and urban spheres, and between youth and adulthood, also fell under Janus' jurisdiction. 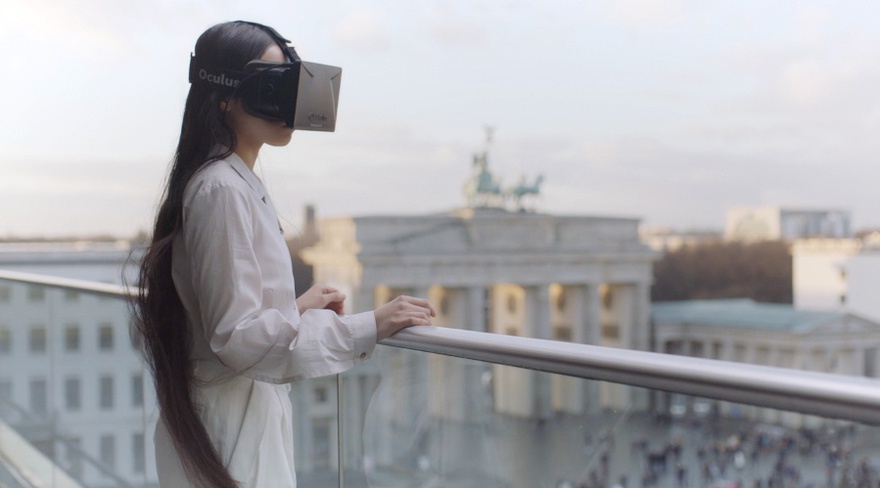 The ninth edition of the Berlin Biennale, curated by New York-based collective DIS, seems to be under the aegis of this ancient god, too. The Present in Drag is all about new beginnings and our shifting perception of time. The show has been anticipated by many as the happy end of a young hype known as 'post-internet art', whose generation of digital natives has reached something like adulthood by now. Likewise, the choice of locations accentuates that Berlin's historical shift from perforated city to global megalopolis has long since come to an end. As if in ritual reference, the catalogue introduces each venue with a staged photo of a newly-wed couple. 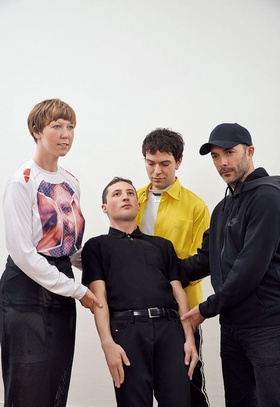 Lauren Boyle, Solomon Chase, Marco Roso and David Toro like to play with their image and that of their biennial. With a professional background in fashion, business, marketing, design and creative direction, the four excel at engineering audiences. When global financial markets crashed in 2008 and many lost their jobs, they saw no other choice than to embrace the present. They formed the collective DIS, mostly known for its online magazine and fierce advocacy of the post-internet art trend. More mindset than movement, this 'internet aware' art typically abandons counter-culture tactics and instead assimilates the agency of commerce and digital governance pervading present life. Despite its intangibility and ongoing criticism from the cultural pessimist camp, the trend gained sizable traction over the years, thanks in part to DIS.

True to form, the quartet has since stayed in motion and refined its ambiguous appearance. Naturally, for this event in 2016, DIS felt inclined to swap clothes. What they came up with is a new version of a seasoned style spiced up with state-of-the-art ruminations about the progression of time. The post-digital has turned 'post-contemporary' and new buzzword of the moment is 'paradessence', a concept developed by Alex Shakar in his 2001 novel 'The Savage Girl' to describe the inherent paradox in all things commodity. In short, the year 2016 gets a firmware update while the tailoring stays the same, and so do many of the artists from the DIS cabinet: Ryan Trecartin, Katja Novitskova, Yngve Holen, Cécil B. Evans – everyone is here. The Kunst-Werke and the Academy of Arts are the main exhibition venues, while the privately run Feuerle Collection, the European School of Media and Technology (ESMT) and a tourist sight-seeing boat act as satellites.

The Academy has the highest number of works on display and some of the most outstanding. Via its glass and steel facade, visitors enjoy a prime view onto swarms of tourists, police and private security mingling on Pariser Platz in front of the Brandenburger Tor, a stone's throw from the American Embassy and the photogenic Holocaust Memorial. Everything in the history of Berlin comes together here. At the same time, the square is something of a non-place; no 'real' life takes place here. The building's fluid transition from inside to outside matches the exhibition's programmatic blend of real and virtual present. On groundfloor, flanked by advertisement lightboxes and a pop-up-store offering wearable merchandise by 'normcore' fashion label Telfar, sits a little exhibition inside the exhibition. Simon and Daniel Fujiwara's The Happy Museum claims to congregate the quantifiable average of altruism, security, sports, entertainment, harmony and control that Germans need to feel happy. Among the objects in the 'museum' are a deluxe waste separation bin, flowers, body paint, eleven white asparagus, and a huge pile of pink-ish high-definition make-up which, according to the Fujiwaras, chancellor Angela Merkel uses for photo shoots and television appearances. Timur Si-Qin's A Reflected Landscape (2016) invites viewers to linger a little longer at the threshold between human projection and narcissistic self-regard, but all it conjures up are daydreams from the heydays of interactive media art. On the top floor, Trevor Paglen teamed up with journalist and hacker Jacob Appelbaum: in the thick of high-security protocols and military classification surrounding Pariser Platz, their server-cum-sculpture Autonomy Cube (2015) provides free access to the anonymous data traffic network Tor. The protean leaping and leaking from one reality into the next reaches its climax when, in a less corporeal reality inside a VR headset installed on the balcony, Jon Rafman has that same square drown in apocalyptic visions within just a few minutes. 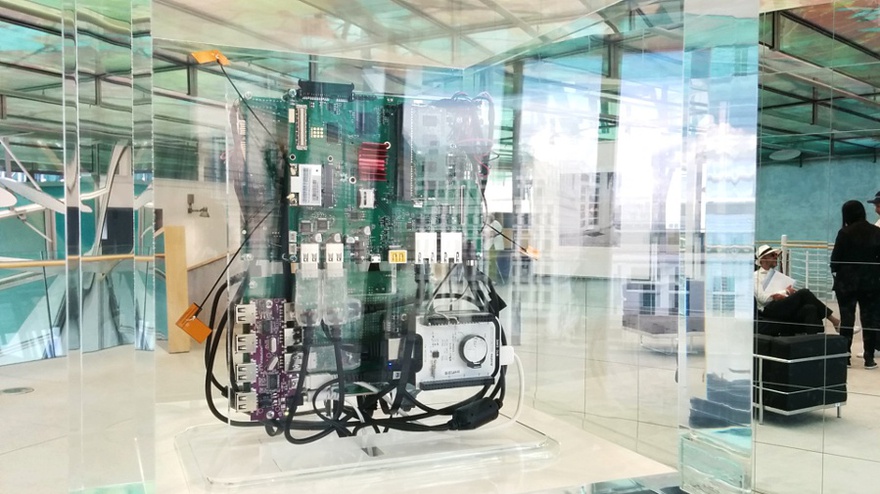 The exhibition at Kunst-Werke follows a very different logic. The works almost live in solitary confinement here, staged in contrasting theatrical settings. For Signals (2016), Alexandra Pirici asked performers in motion-capture suits to enact crowdsourced newsfeeds in a pitch dark space. Josh Kline's cynical Crying Games (2015) are set in a bed of white pebble stones. Wu Tsang's beautiful installation and film Dulian (2016) can be easily missed as it is hidden behind two doors. Cécile B. Evans flooded the basement hall and made a new age temple for her video What the Heart Wants (2016), in which an algorithmic entity named HYPER contemplates the contemporary human condition from a machinic point of view. Army of Love (2016), a film by Alexa Karolinski and Ingo Niermann, is set in a red cell with curved floor similar to a chroma key studio. With unique wit and sensibility the film pokes fun at the economy of love in present times. Instead of deep data algorithms humans speak here from the depth of their souls. Regrettably, a lot of this sincerity is sapped by the film's conventional montage and thick layer of fluffy ambient music rounded up by beanbag seating. On the way out, we pass by an oversized photo-cutout of Rihanna in bikini seated in the courtyard. Like an acephalic goddess of headless capitalism, Ewaipanoma (Rihanna) (2016) by Juan Sebastián Peláez portends the scenery awaiting us at the next venue, the European School of Management and Technology

Here, Katja Novitskova's Expansion Curves (fire worship, purple horns) (2016) marks the entrance to the exhibition located inside the former GDR state council turned neoliberal management school. The setting itself is so wondefully schizophrenic that even the perceptive trade-fair presentation of three Blockchain Visionaries (2016) by Simon Denny and Linda Kantchev can add only little to it. The same goes for GCC, a collective of eight, who ironically import platitudes of new age positivism from the Gulf region into the secenery. Positive Pathways (+) (2016) consists of a warped running track loop surrounded by fine desert sand. The idea is clear but the stark references make it too easy to come full circle. 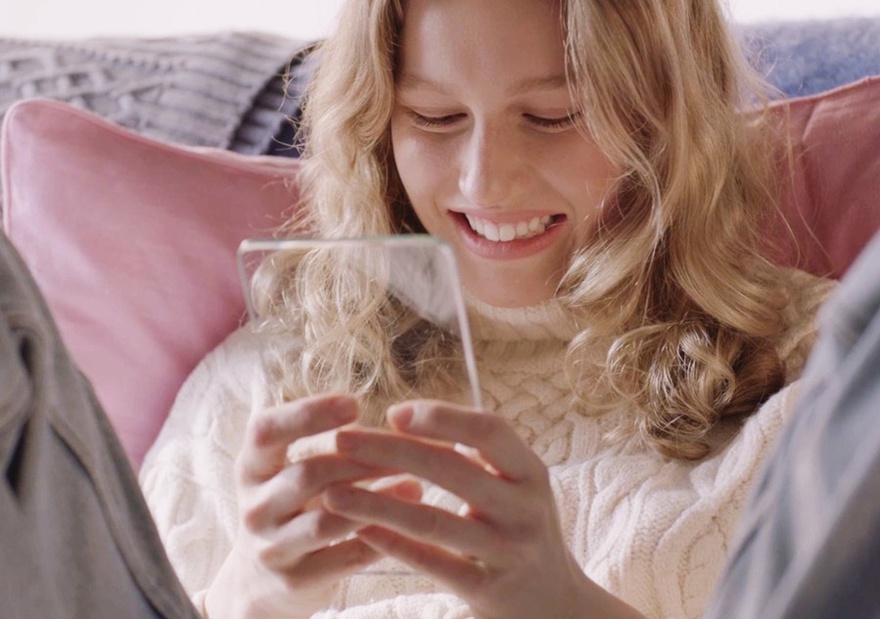 Imbued with marketing strategies and e-commerce lingo, the biennial's amalgamation of real and virtual life incorporates the logics of the creative industries into its curatorial mission. After all, DIS must profess to own the future in order to sell it as commodity. For this to work, the curators rely on man-in-the-middle tactics, secretly relaying and tweaking communication between the eyes of the beholder and the world out there. Yet, between affirmative and subversive the biennale wants to be everything at once and eventually gives away a lot of potential, clouding realities in ambiguity in lieu of a reality check, omitting political positions instead of taking them.

No doubt, DIS do their thing with admirable élan and precision. They do not waste our time with binary fluffing, even if they still blow it out of all proportions. All venues have been carefully chosen in line with the 'paradessences' the curators aim to unpick and many artworks inside further challenge the complex ideologies of the architecture. Conceptually speaking, the orchestration adds up. But the uniformity and hermeticism make the experience onerous. Almost everything is wrapped in stock photo and Duty-free aesthetics (is 'normcore' the new drag?) and the curatorial line allows very little disruptive anomaly. At the same time, as an exhibition in the expanded sense, the biennial could have done more to forage further into other realms of present life, digital or not. This could have also helped create a more convincing balance between curatorial framing while giving artists and artworks space to breathe.The cohesive forces of all elements combined build up a surface tension that is impermeable to empathy and repels the aim to engage with the human questions at the core of many artworks. 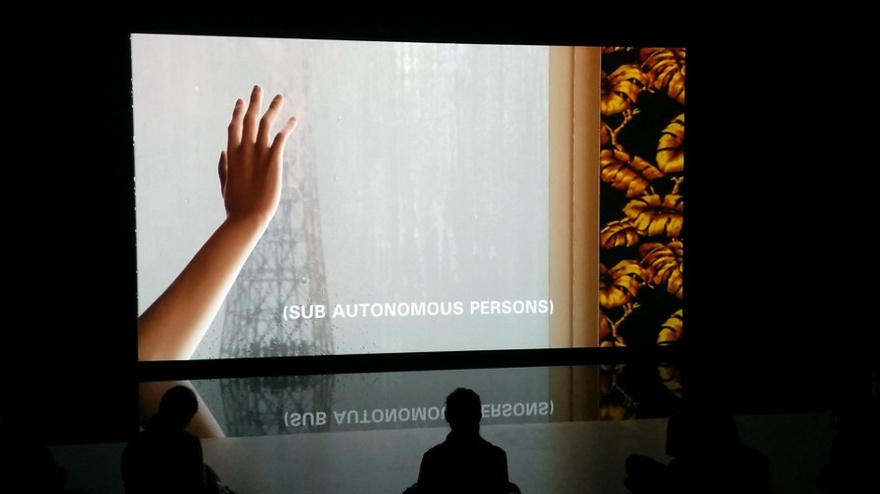 But, as with all things DIS, this too has two sides. Their game of tensions between affirmation and uncertainty is seducing and disturbing at the same time. It creates its own paradoxical essence in that it has its finger on the pulse but eventually stands in its own way. DIS do this on purpose, of course. Taking the hyperbolic figure of an accelerated present to the extreme is meant to leave spectators in a state of suspension. Like showroom dummies they stare at the glass pane that divides them from a multiplicity of fragmented realities, striving in vain to access the Real. Only those who don't fall for the travesty can see both ways.

Jens Maier-Rothe writes, researches, teaches and makes exhibitions. From 2012–2015 he was founding co-director of the art initiative and exhibition space Beirut in Cairo together with Sarah Rifky. He lives and works in Berlin.