Nil Yalter's solo exhibition Off the Record is centered on immigration, displacement and neglected histories – themes that have defined the artist's practice for decades, as evidenced by an exhibition constructed as a retrospective over two floors that includes early digital experiments to recent oil paintings. It begins with a video installation placed at the gallery's entrance titled Immigrants; the work includes ten interviews filmed between 1976 and 2005, which are displayed on separate monitors arranged to form a circular, monumental installation. The interviews narrate the issues immigrants from different backgrounds and nationalities face in France while crossing borders, finding jobs, renting apartments and exclusionary treatment. Each conversation is shot in actual living spaces, and other family members or acquaintances often surround the interview subjects. Collectively, the stories create a somewhat silent chorus: the volumes on the monitors have been turned down so that what is being discussed is almost inaudible until viewers come closer to the installation. In one interview, a voice can be heard saying 'I tried to adapt by almost rejecting my own origin'; another claims 'they didn't want to rent to us when they learn we are from Turkey'. Thus the dichotomy of belonging nowhere and being a stranger everywhere becomes the epicenter of the installation as the stories overlap. 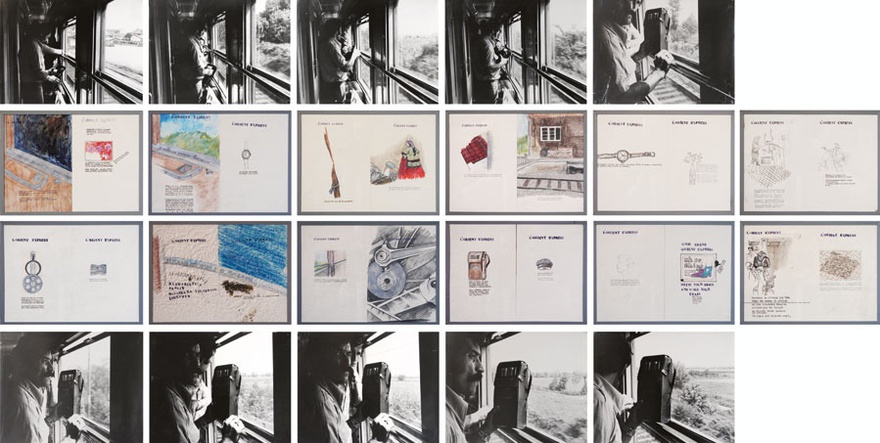 On the white walls of the gallery surrounding the installation, digitally manipulated photographs show the faces of immigrant women, with their names written in their own handwriting below each. Some photographs have been left untouched, and others have been pixelated so that distinct facial features are unrecognizable; yet the photographic composition, like the video installation it frames, underlines the vicious circle in which these women are entrapped; the distorted imagery is a reminder of the instability in which these women often find themselves as unpaid, unrecognized domestic workers.

Related experiences of living on the edge of the social order are seen, too, in Orient Express (1976): a multimedia installation placed at the far end of the gallery's first floor that follows the travel of the artist through one of the final Orient Express train voyages that started from Lyon and ended in Istanbul. Here, the train serves as a metaphor for cross-border and cross-cultural lives. Assembled next to a 16mm video shot during the journey is a row of ten frames hung on the wall, in which photographs of travellers, drawings of objects such as watches, cassette players and landscapes, along with personal notes by the artist combine to present imagined and loosely documented landscapes. Photographs taken by Yalter of an unknown traveller (a man) with a cassette player positioned above each; the man's struggle to construct an idealized version of the native land by listening to folk songs is carefully noted by the artist as an experience of homesickness and alienation from both the culture he is born into, and the one he is trying to adopt. Elsewhere, several works provoke the restricted, geographically specific interpretation of displacement to stress the problematics of reducing individual experiences to a single historical interpretation. Temporary Dwellings (1976) presents a series of cardboard panels featuring collages made from found objects (glass, latches, a broken buckle and polaroid photos), texts, and drawings which document living spaces of immigrants on the outskirts of Istanbul in the 1950s during which Turkey's rural population was forced to migrate to larger cities for economic opportunities; these include, the banlieues of Paris during the influx of immigration in 1970s; and the communities Puerto Ricans developed in New York in the late 1970s to highlight the inhabitants social isolation. 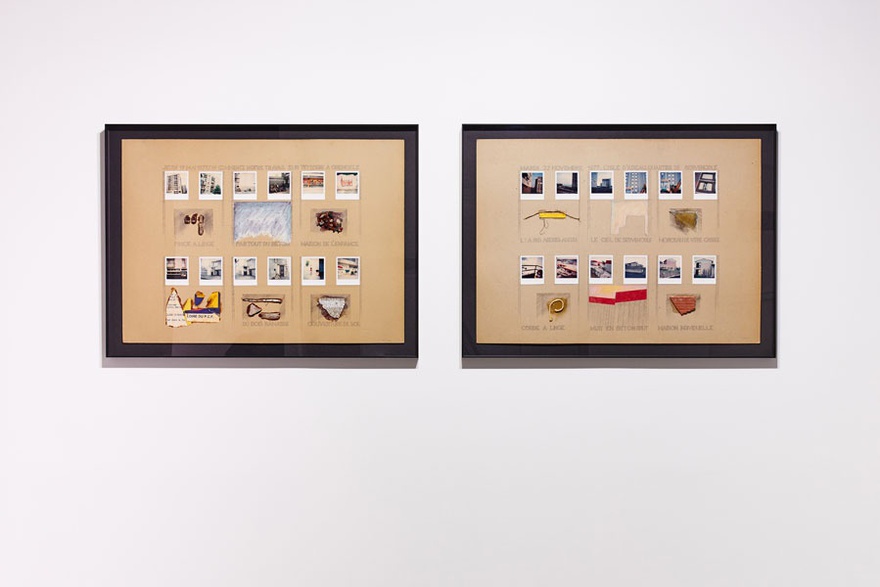 A feeling of entrapment takes a more severe tone in Deniz Gezmis (1972) – an installation comprising of paintings, drawings, and text as well as archival photographs gathered from national newspapers – which documents the events leading to the execution of leftist leader, Deniz Gezmis: one of the founders of People's Liberation Army of Turkey (THKO). Gezmis and his comrades were executed by hanging in May of 1971, following the coup of 12 March that year, after approval from the National Assembly of Turkey. The daily events leading to executions are rigorously painted in text on large cardboards sheets, which creates a heavy emotional burden on the viewing audience. The most directly political work in the exhibition, Deniz Gezmis reveals much about Yalter's creative process, which in her words constitutes an 'act of presence'.[1] The dedication with which Yalter followed the news and reflected on its transformative affect represents a healing ritual, born in response to catastrophic events that are embodied by the artist herself. The work itself is realized during a short period of time Yalter visited Turkey in 1972 while she was living in France. Born in Cairo, raised in Istanbul and having lived in Paris, the artist's experience as an immigrant and a woman informs her practice. Hence, the artist is not only an outside observer but a part of the communities she works with at the same time that she is empowering the marginalized individual as a driving force towards a social change.

Yalter's act of ritualization is evident throughout the exhibition. Whether the artist is telling the story of a woman who came to a newly developing metropolis from a village, working as a maid to take care of her children and build a new life in Rahime, Kurdish Woman from Turkey (1979); or of two young concubines preparing themselves for the sultan in Harem (1980), Yalter's ability to form a narrative between fiction and documentary encompasses a carefully constructed ceremony.

The dominant work that defines the process of ritual in Yalter's practice is exemplified in Shaman, a video of a performance Yalter realized in the basement of Museé de l'Homme, Paris, in 1979. In the work, Yalter wears an authentic ceremonial mask lent to her by Bernard Dupaigne, an ethnographer in the museum, and recreates a shamanic dance that originated in Central Asia over sound recorded during one of the Dupaigne's study trips to the region. In the process, the artist interprets historical associations of what might be called witchcraft, reversing the common accusation of witchery as a disciplinary tool to oppress female bodies into a liberating moment enacted by a contemporary outsider – both immigrant and woman. In being off the record, as the title of the exhibition suggests, a state of liberation is witnessed.

Off the Record is on view at ARTER, Istanbul until 15 January 2017. For further details, please follow this link.

Rasit Mutlu is an independent curator and critic based in Istanbul, Turkey. He is a recent graduate of the University of Westminster, MA in Museology with the thesis titled Curating in the Age of Post-Internet: Between Theory and Practice mainly concentrated on physical applications of art after the Internet.

We Are Sick, But We Are Alive

Mega-museums and modern artists from the Middle East