Both Sides of the Curtain

The eerily quiet upward alleys of the Ixelles neighbourhood in Brussels lead to Rue de l'Hermitage, where the art space La Loge hosted the second chapter of the eighth edition of Meeting Points, Both Sides of the Curtain, from 7 to 17 December 2016. (The first chapter took place in Cairo in May 2016, and the third will be held in Beirut in April 2017.) Curated by Malak Helmy and Raimundas Malasaukas and featuring 23 artists, the exhibition for the Brussels chapter included a four-day series of 'live acts' over three floors of the venue, under a broad set of loosely related themes, such as dreams, sleep, surface, fantasy, and movement. 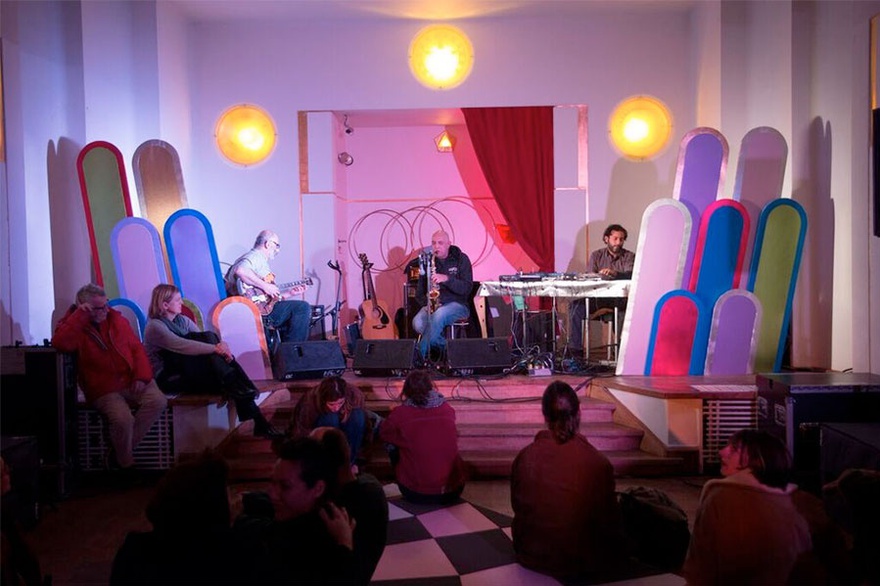 Concert by The Dwarfs of East Agouza.
Image courtesy of Lola Pertsowsky.

A slightly disquieting, almost sinister, aura pervades La Loge – perhaps an atmospheric trace of the site's previous life as a masonic lodge. The architecture is disorienting: irregular rooms with odd, sharp angles open into each other like a labyrinth, and masonic symbols are built into strategic spots. A medium-sized black-and-white mosaic of a ruler and compass welcomed the audience on the ground floor lobby next to Alix Eynaudi's The Backdrop: a nineteenth-century painting of a cloudy sky on a canvas hung against a light box like a curtain.

In the basement space, Cairo-based, artist-run collective Nile Sunset Annex (Jenifer Evans and Taha Belal) staged an exhibition featuring six European, Arab and Latin American artists. Described as 'six 'publications that come with dreams and gestures', works materialized in diverse forms. These included a blanket printed with a book cover and a book's index printed on the fabric of a bench by Chris Beauregard (The Starless Void Above Him, 2016); handwritten information about the fascinating lives of bees scribbled on gas canisters by Olivier Castel; beermats printed with dance instructions by Ericka Florez (Hegelian Dancers, 2016); an illustrated book with overlapping cutouts of layers of camouflage telling a sci-fi tale entitled A Tardigrade's Dream (2016) by Shehab Awad; and a delicate golden name necklace that says 'I Am Alone' by Doa Aly (2016). The plinths hosting the artworks, with their irregular organic shapes and pastel colours, appeared like whimsical standalone sculptures in their own right. 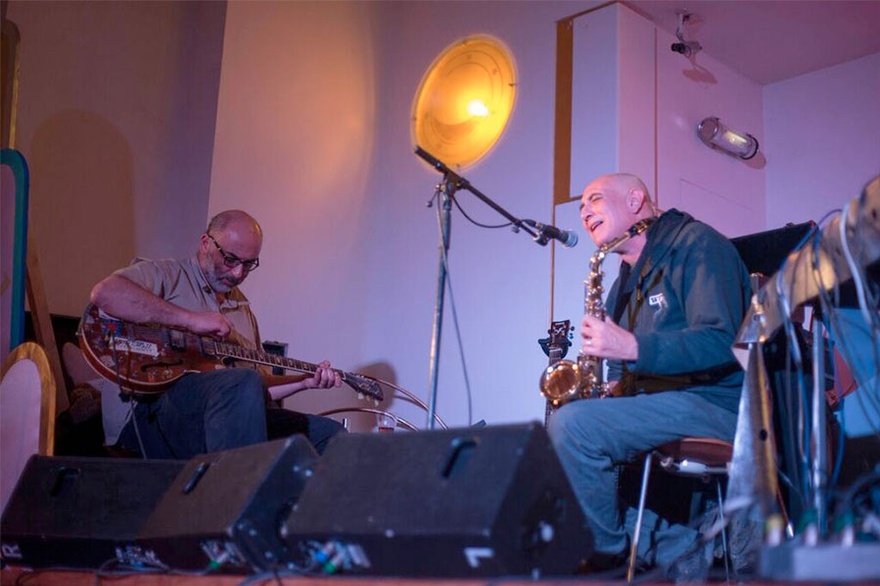 Concert by The Dwarfs of East Agouza.
Image courtesy of Lola Pertsowsky.

On the ground floor, Joe Namy was commissioned to create the scenography for the main hall, where most of the live acts were staged. He offered beautifully designed theatrical stages and lighting design inspired both by the set designs of 1970s Kuwaiti and Arab TV shows and the Bauhaus school's Oskar Schlemmer. Titled Live at the Paradox (2016), Namy used satin, bronze, felt, plastic, wood, paint and lights to create what looked and felt like a slightly worn-out space that felt more vintage theatrical stage than ad hoc reproduction. His harmonious organic shapes softened and enlivened the harsh geometry of La Loge's structure, inviting audience members to spontaneously distribute themselves around four centres of attention: the elevated main stage, a cubic staircase, a perspective-bending irregular chessboard felt mat resembling a distorted runway or dance floor, and a fountain that hosted a pulsating soundscape composed by Egyptian artist and musician Alaa Abdellatif.

Several other artworks were placed in strategic corners of the three-story building. These included a video installation by Sophia Al-Maria titled DOVEDOWN W ZEROS FOR OHS (2016), featuring a medium-sized flatscreen lying on a pile of sand in a narrow hidden corner next to a wall carved with a see-through geometric pattern resembling a mashrabiya. In a three-minute video loop, three grotesque ghostly apparitions materialize in succession. Elsewhere, a sound piece presented a text about worms written by Candice Lin and read by Doa Aly, and commissioned especially for Studio Cairo (the first chapter of Meeting Points 8). The combination of these artworks along with the programmed events appeared as a collection of fragments picked from an extended collective stream of consciousness, where seemingly disconnected excerpts of poetry, literature, music and dance intertwined seamlessly without a pretense of coherence or homogeneity. 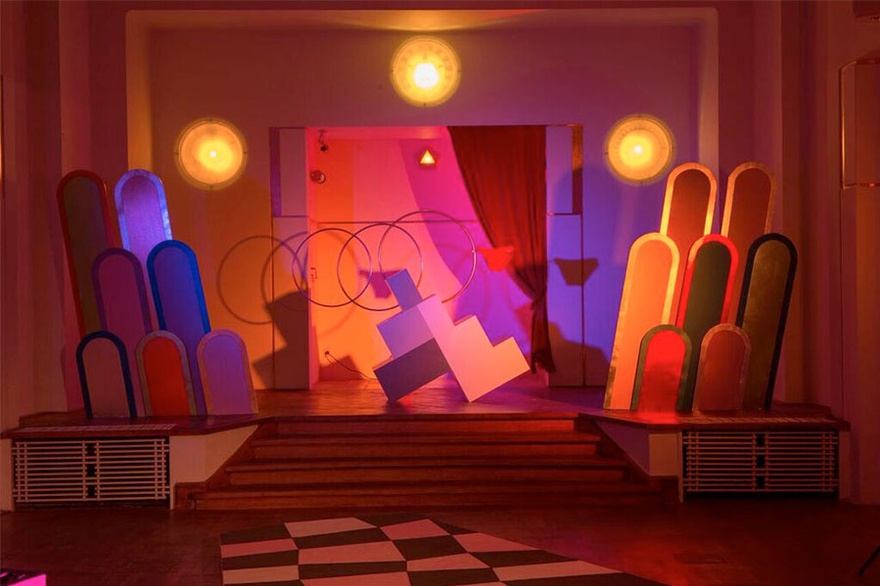 One element loosely holding the four-day live programme together was music and the act of listening. For three consecutive nights in the main hall, the Dwarves of East Agouza (Sam Shalaby, Alan Bishop and Maurice Louca) entertained the audience with an improvised live set of electronic tables, guitars, saxophone and voice, floating between jazzy tunes, Arab/Oriental percussions and dab/electronica. Bishop showed off his confidence in working the voice, at times stretching, modulating and tearing apart a single note, like a continuous wailing lament of hinted syllables and made-up onomatopoeias, still intelligible as a dialogue with other instruments rather than a formalist act. Apparent was Bishop's deep knowledge of, and dexterity with, his instrument and musical rules that enabled him to deconstruct the act of singing.

Moreover, the harmonious relationships between the Dwarves was clear in how they established non-verbal codes of communication (nods, body movements, glances), which made it possible to direct, divert and link different melodic and rhythmic flows without hesitation, adjustment or abrupt shifts of chords and progressions, pandering to each other's crescendos or indulging in an ostinato. Everything pointed to an intimacy and collective sensibility that is impossible to speed up or replicate. 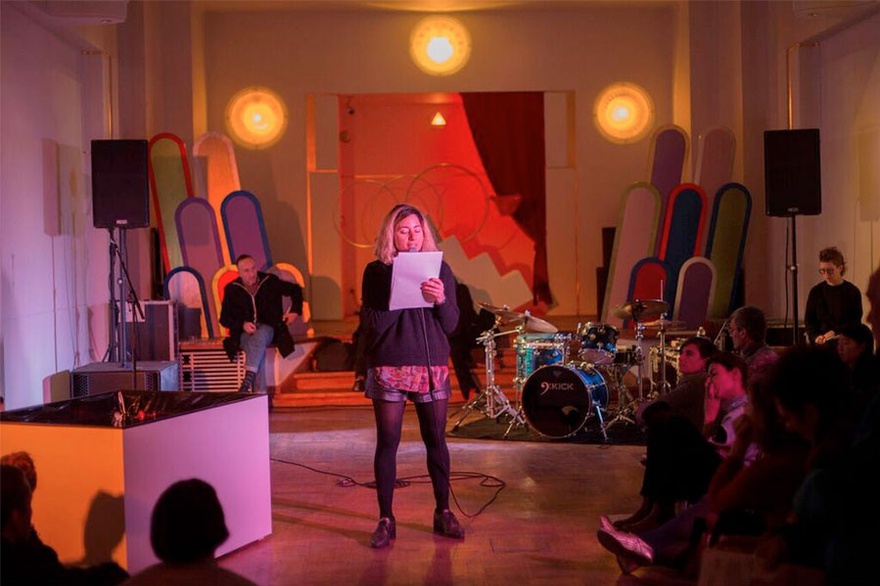 Meeting Points 8 itself sought to create a similar space for retreating and indulging in words, scores, forms, and repeated movements, like an extended rehearsal session. As the introductory leaflet said, the intention was for the whole endeavour to behave 'like an improvisation' that is 'also a score'. What all the elements of the exhibition and live programme at La Loge had in common was a tension between meaning and representation, the impossibility of translating one form into another, and the potential of conjuring sentiments with sounds rather than images. Collectively, the artworks and events seemed to attempt to resist the urgency of 'relevance' or even coherence by being in the present moment and inhabiting the space without discursive shortcuts or a clear set of expectations.

On the third evening, for example, the curators staged a listening session: Helmy, Malasaukas, and Bishop bounced tracks by Frank Ocean, Brandy, Young Thug, Miles Davis and Brussels-based classical American composer Mal Waldron, as well as traditional Indonesian music from the eighteenth century, to one another. In speaking between the tracks, the three of them jumped from one genre to the next, loosely and vaguely musing on the non-verbal, untranslatable codes of musical language, in which the listener completes and adapts the 'meaning' of each track according to the feelings it conveys for them. Bishop eloquently spoke about the cognitive gaps in constructing a shared perceptive, citing instances when we can't understand the lyrics of a song yet still assign a unique personal connection based on the feelings it evokes in the listener. 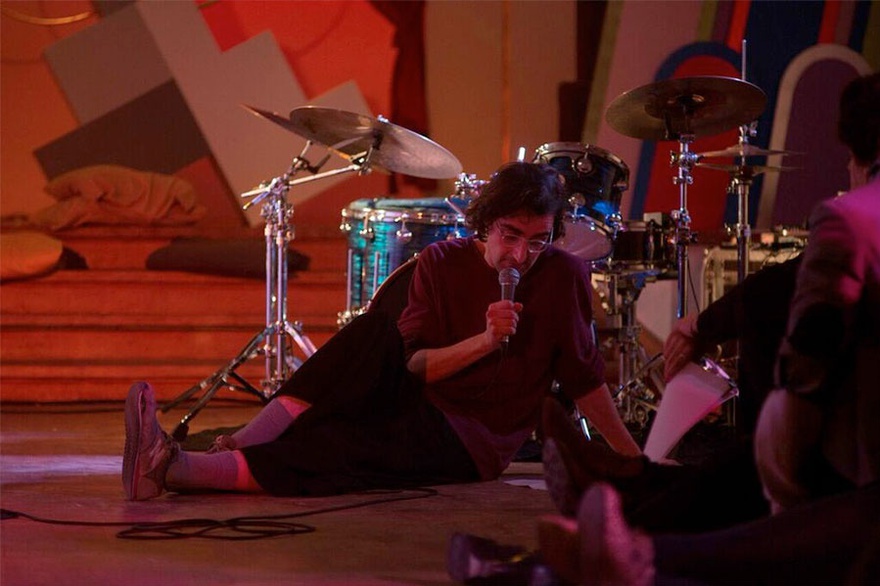 This particular live event felt like peeking behind the curtain of an artists' studio session in progress. Yet, the curators could have encouraged a more engaging and participatory setting, whether through programming an open workshop where audience members brought in their own tracks and literary references, or by documenting these meeting points to stimulate collaborations with other practitioners in the future.

Of course, such moments of interaction did occur. Mirene Arsanio's writing workshop grappled with the various meanings of the word 'lodge', which span architectural history, class connotations, and more esoteric applications. Arsanios asked participants to develop a text by using 'lodge' in a sentence – a word rather than a theme or event, like a note as a starting point for a melody, rather than a chord that works as a structure and gives direction. These texts were read out in the main hall by the writers and other participants, including Alberto García del Castillo, their positions changing occasionally as if to follow an imaginary geometric pattern. With these aural 'interruptions' that tied the elements of the programme together, participating artists and curators managed to speak expressively about language, poetry and music's potential in filling the gaps of meaning that words leave us with, through a sensorial experience. 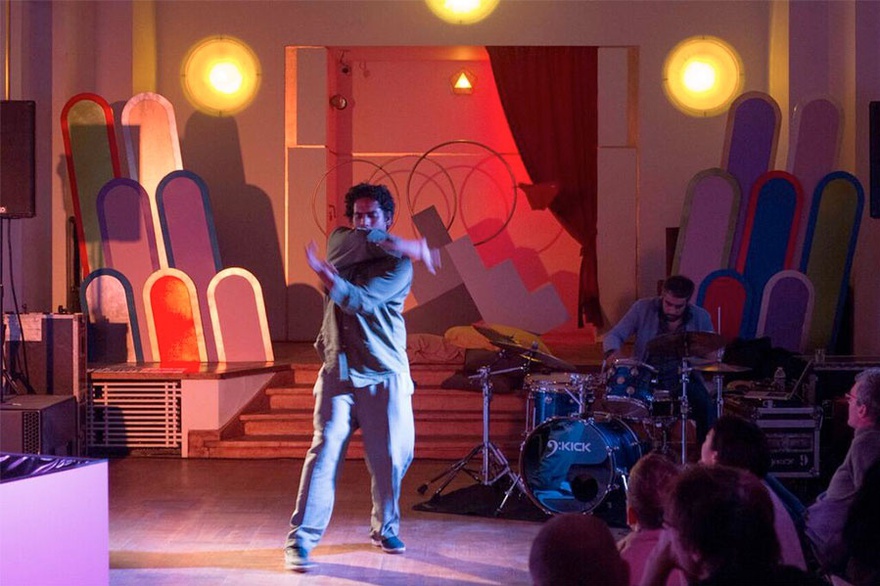 If viewers did not make an effort to engage and delve deeper into the conceptual framework of Both Sides of the Curtain, they found a space that was both visually and atmospherically captivating, and which hosted some very well performed live acts around recurrent themes. Yet, the programme felt too dense and diverse to be taken in as a whole; it demanded the active participation of the audience to engage with the concept of thinking collectively. But in order to fully grasp the development of individual artworks and collection of live acts, one had to spend long hours in the space, reading, listening and letting the voices and visions sediment. Not everyone had that luxury. Nevertheless, Both Sides of the Curtain made a point around the necessity of slowing down, expressing a vulnerability in words, and drifting away into speculative explorations, as opposed to addressing concrete outcomes.

In a cold city where armed soldiers wander around near-empty wide streets, among towering glass buildings that host the headquarters of failing European institutions, the theme of the curtain felt incredibly timely given the current political situation in Europe, as tied as this situation is to wider geopolitical conditions and realities that exist outside of Europe's borders. In light of this, Both Sides of the Curtain briefly made Brussels a meeting point for an informal network of international arts practitioners involved in the long-term program of Meeting Points 8, at a time when displacement, relocation and uncertainty are becoming a pervasive reality for artists from the Arab world and elsewhere.

Laura Cugusi was born in Sardinia and lived in and out of Cairo since 2008. After completing her studies in media theory and social sciences at the University of Bologna and Santiago de Compostela, she has been involved in multiple research projects focusing on irregular migration via the Mediterranean Sea, and on mapping informal urban practices in Egypt, which she worked on in collaboration with the American University in Cairo and the Cairo Lab for Urban Studies, Training and Environmental Research respectively. Together with Lina Attalah and Nida Ghouse, she co-founded the independent research based art collective Take to the Sea. They exhibited in Manifesta 8 in Murcia (2010), the Hydrarchy show at the Contemporary Image Collective in Cairo (2012), the Yogyakarta Biennale (2013) and had their first solo show in Cairo at Nile Sunset Annex in 2013. Her writing and photography have been featured in several publications, among others Ibraaz, Nafas Art Magazine, Canvas, Mada Masr, Jadaliyya, Egypt Independent, The Exorcist (Van Abbe Museum), PhotoCairo5 Catalogue, "E ntry Points. The Vera List Center Field Guide on Art and Social Justice" (forthcoming) and "Dissonant Archives: Knowledge Production and Contested Narratives in the Middle East".

The performative in the work of Hassan Khan

I Once Fell in Love with an Audience Member

Interventions as Performative Gestures For Political Engagement in Jordan