It is in the digital realm, in the dissolution of territory and nation, where art and ideas are made free, or so informs the concept proposed by Beyond Boundaries: Art By Email, an exhibition that brings art from the Middle East to the North of England. Initiated as a collaboration between Yorkshire Sculpture Park (YSP) and ArtRole, the exhibition comprises around twenty new works with contributions from eighteen artists. Initially conceived as an opportunity for artists from the Middle East to travel to YSP and display their works, the curators were forced to review their approach in order to circumvent the border restrictions experienced by artists who attempt to travel from the region to the UK to exhibit their works. Instead, an open call invited submissions to be transmitted by email, from artists who would find travel to the UK prohibitively difficult. The outcomes are more interesting than might originally have resulted from a more general commission, as the exhibition poses questions about the function and efficacy of border procedures, and its limits on creativity. 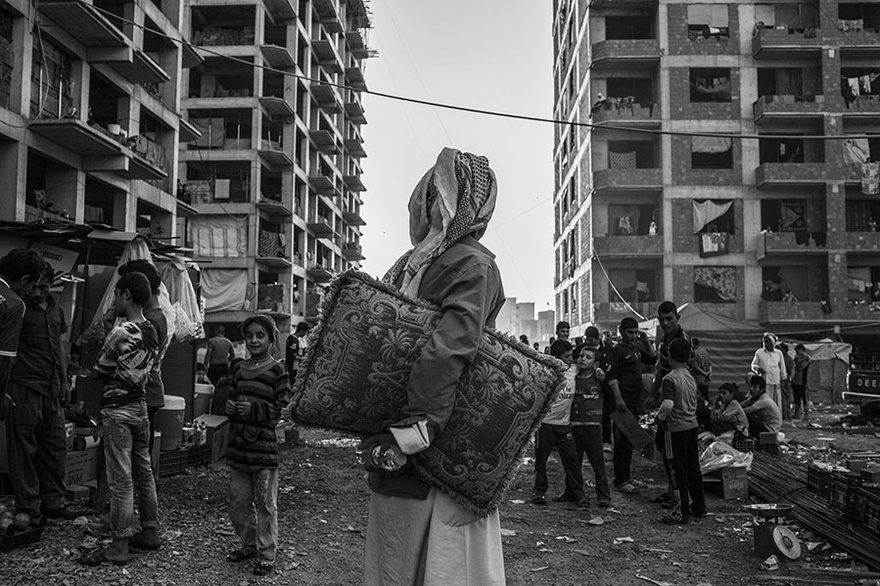 The collaboration between YSP and ArtRole has a decade-long history, and Beyond Boundaries appears as part of a wider endeavour in partnership with Asia House and the Caspian Arts Foundation – an educational trust that exists to support visual arts students in the Middle East. Titled De[con]struction | Reconstruction: Living in a State of Creative Uncertainty, the project aims to 'explore in depth the role of institutions and architecture and the preservation of cultural heritage and collective memory within the Middle East and Asia'. ArtRole, founded in 2004, has an intrinsic link with Iraqi Kurdistan through the identity of its founder and CEO, Adalet R. Garmiany, a British artist of Kurdish-Iraqi origin. This connection is reflected in the exhibition, where out of eighteen artists, ten are described as Kurdish-Iraqi, or from disputed Kurdish territories in Iraq. Other nationalities represented are Egypt, Iran, Turkey and the UAE.

Situated in the intimate Bothy Gallery – 'Bothy' taking its name from a Scottish term for a hut dwelling – the majority of the works take the form of photographs, emailed and reproduced on plastic boards. Large windows enable a contrast between the innate interiority of digital collaboration with the expansive outside setting of Yorkshire Sculpture Park, which combines 500 acres of outdoor sculpture gallery and a series of interior spaces, each usually engaged in individual exhibits. Ranging from Henry Moore, one of the park's earliest patrons, to James Turrell and Roger Hiorns, the ever-changing outdoor displays work in collaboration with – and sometimes in resistance to – the landscape, itself an ergonomic land form designed in accordance with landscape architecture practices associated with Capability Brown. The Bothy Gallery sits at one of the highest points in the Park, and may be one of the first stops for visitors, who have the opportunity to engage with books on Arab art, before entering the exhibition, spread across four snug spaces within the gallery. 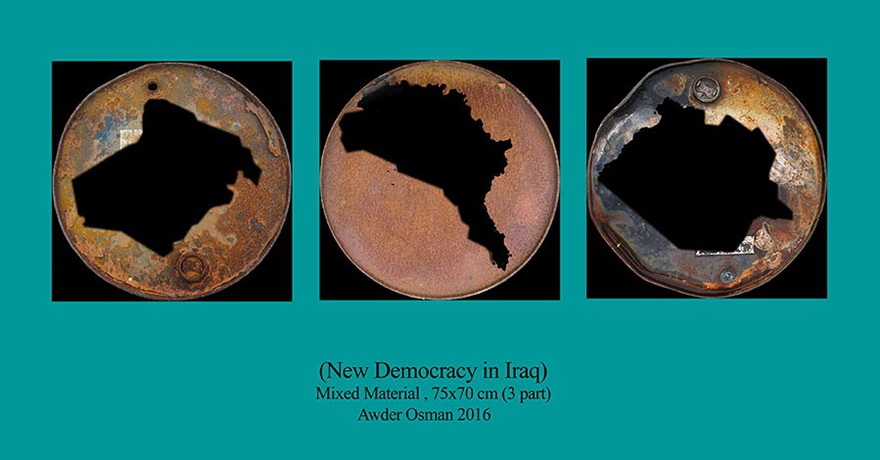 The second room is where we encounter some of the largest works: Iranian artist Sahand Hesamiyan's 3D-printed sculpture Pardis (2015–16) stands in a corner, busily etching an abstract geometrical structure that recalls the principles of Iranian architecture in hollow, spindle-like objects that are intended to fit together and hang from the ceiling. The piece is an extension of Hesamiyan's shortlisted work for last year's Jameel prize, held last year at Istanbul's Pera Museum, which showcased large-scale welded metal sculptures, the strength of which is opposed to the delicacy of the plastic printed forms seemingly wrought from air on show in this gallery. The shapes, small enough to hold in your hand, reference Cypress trees, and are called into relief by their juxtaposition with a large Lebanese Cypress tree in the Park itself, visible from the gallery window.

YSP's first virtual residency is assumed by Azar Othman Mahmood, who in 2010 was among five artists denied entry at the UK border, despite participating in a comprehensive survey of contemporary art from Iraq to be held at Manchester's Cornerhouse Art Gallery that year. His work in Beyond Boundaries replicates his 2013 piece People's Questions in a City, which collaborates with the audience to interrogate their relationship to the urban and political environment. The project extended beyond the display in a virtual conversation with YSP curator Helen Pheby on 21st January, which further problematized the notion of audience participation with an artist separated from the work by political embargo. 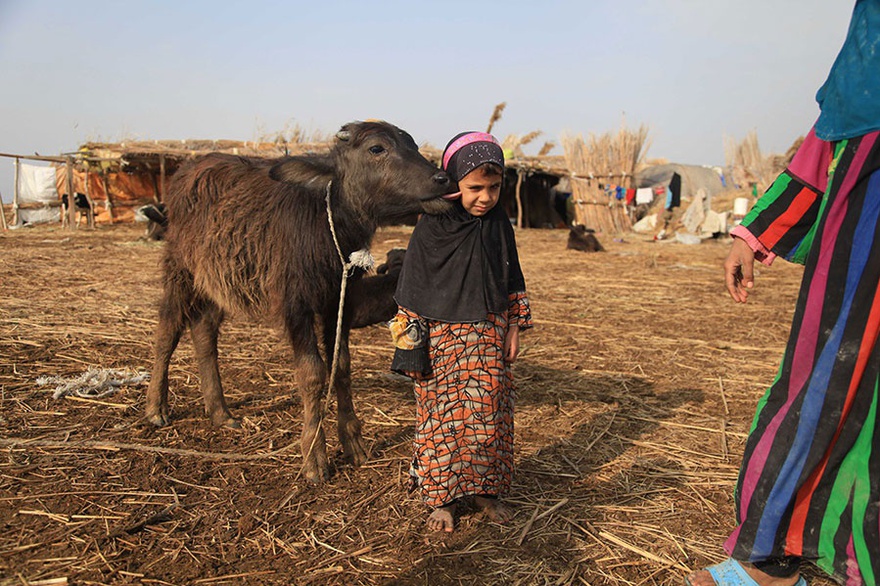 Bnar Sardar, The Garden of Eden is likely to disappear, 2015.
Courtesy the artist, ArtRole and YSP.

The strengths of this exhibition lie in the challenge posed to the potential expectations of the viewer, to engage with the exhibition's stated aims to 'share the resilience, hope and creativity that thrives throughout the region, often despite the circumstances'.[1] Taking place in the wake of the 'Brexit' referendum result to leave the European Union, some of the most decisive 'out' voters are resident in the immediate locality of YSP, with 66.3% of the residents of Wakefield, the closest town, having voted to leave. Much of the rhetoric of the campaign to leave overspilled mere nationalism to invoke right wing, racist and reactive narratives, exploiting the migrant crisis and stoking an uninformed uncertainty about Middle East regional politics. As 95 percent of visitors to YSP hail from the surrounding area, the curators are certainly well poised to create this challenge, and, when probed about the subject of political neutrality within art institutions, are confident that by choosing pieces that reflect aspects of ordinary life, the exhibition creates an understated challenge to prevalent stereotypes of the region.

Such political subtlety is manifest in one of the largest photographs in the exhibit, Bnar Sardar's The Garden of Eden is Likely to Disappear (2015), which captures a young girl and a calf; an image that initially appears somewhat innocent and anodyne, yet is part of a larger series that documents the livelihood of the Marsh Arabs, whose survival was seriously jeopardized during the regime of Saddam Hussein, and whose homeland is now protected by UNESCO. Here, the necessity of context raises important questions for the curators of whether to provide full detail that situates the photograph within its complex socio-political narrative, or to leave the viewer uninformed. The resulting companion text strikes a successful balance between the two extremes, allowing the viewer an accessible insight into the political import of an image of a child and her pet.

Similarly imbued with quiet power is Mohamed Khalid's photographic series Dirty Messages, which examines fleeting graffiti tags scrawled into the dust that rests on cars and walls in abandoned construction sites. Four images from the total sequence recalls a nation bent on refuting its natural environment, battling against the desert winds that sweep sand across cities and encroaching on the urban territory. Whilst the viewer will recognize the impulse for mark making, the photographs also present an opportunity to find familiarity in languages that have been implicated in prevalent anti-migrant attitudes in the UK. 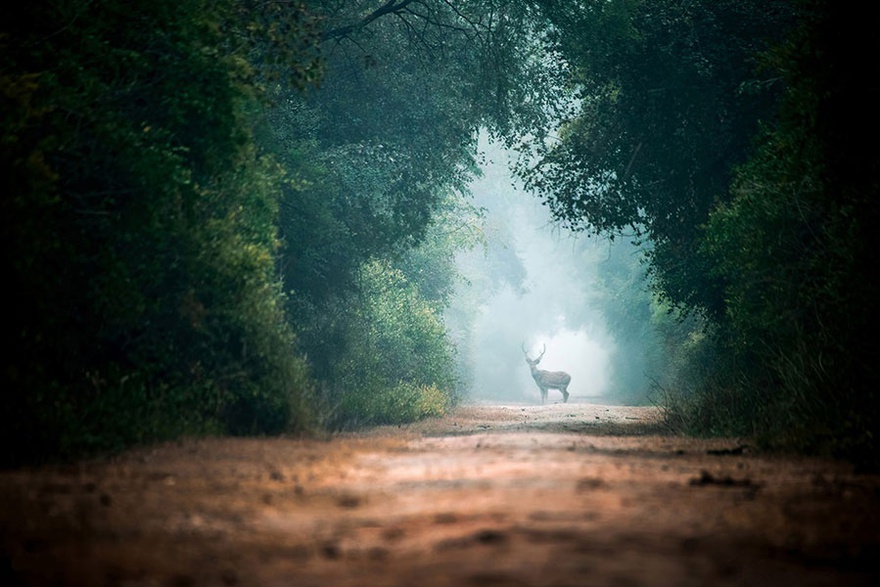 Sabr Dri Photography, The Deer on the Road, 2016. Photograph.
Courtesy the artist, YSP and ArtRole.

The exhibition goes some way to fulfil its proposal of expanding the opportunities available for artists constrained by the frustrations of bureaucracy, by initiating a network of artists to participate online. Yet, in the absence of a more comprehensive attendant public programme, aspects of these political messages are unfortunately muted. Moreover, the full potential of 'digital art' is not explored, with the significant majority of the work comprising photography and video installations. These include works from Rozaghar Mustafa (Iraq) and Sarah Kahlil (Egypt), whose video works are played on a loop, sharing the same monitor. This decision may be a nod to their comparable autobiographical engagement with struggles of selfhood, though it is not made clear whether this decision is a curatorial juxtaposition, or an imperative due to spatial constraints. While Mustafa's piece, I am Similar to My Father (2013), is a claustrophobic portrait of the conflicting emotions she encounters in her experience as a female artist, told via nine frames playing simultaneously with overlapping audio, Khalil's video Clown Inside Me (2016) documents her childhood fantasy of becoming a clown, a dream when realised late in life becomes politically charged as we see her performing to children in Beirut refugee camps. Playing in the fourth and final space is Mai Al Shazly's Undercurrents (2015), which creates a visual opposition between two footage streams; one of the artist beating a punch bag, the other a subaqueous ocean scene, which also provides the soundtrack for both videos, resulting in a discordant audio-visual conflict that parallels the theme of political violence juxtaposed against the maintenance of personal life that threads through the exhibition.

In prioritising works of photography and video – mediums that are more easily translatable across email – the exhibition misses some opportunities to fully engage with the limitations of the digital realm as a site of freedom. Of course, when recruiting art via open call, curators naturally limit their own power for selection, and so in some ways this results from a necessary negotiation with the material that is submitted for review. So, whilst the final exhibition perhaps lacks some of the ambition of its original concept, it offers a welcome intervention that transports personal experiences in the Middle East to the Yorkshire countryside, building distance and intimacy within a digital landscape.

Beyond Boundaries: Art By Email was on show between the 07 January – 05 March 2017 at Yorkshire Sculpture Park.

Siobhán Forshaw is an independent writer and curator, based in London.