A careful attempt to measure out Istanbul artist Cevdet Erek's new exhibition in Bristol seems particularly important given the artist's own concern with metre, spacing, and rhythm. Just as sounds mingle in space, Alt Üst reconfigures existing works across multiple media forms into a site-specific and collaborative matrix. 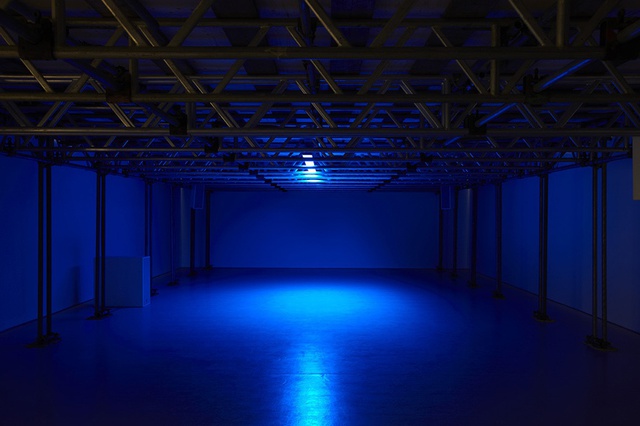 Walking into the exhibition space, a long rectangular warehouse, ears and feet immediately attune to the steady 120bpm kick drum booming through the walls of a smaller rectangular central chamber. This all-pervading 'dum dum' is overlaid by three sequenced patterns of varying loop-length, Grid 1, 2 & 3, which are emitted from flat, white directional speakers arranged like blank paintings at intervals around three of the outer walls. Synched at double speed to the 4/4 beat of the sub bass, these rapid mid-range patters traverse and quantize this outer space, spacing it not into centimetres but beats per minute. Vibrating at multiples of the duration of a second, the drum machine and the architecture thus distribute each other. At intervals, all these beat sequences simultaneously fall into syncope, punctuated only by the ongoing sonic translations of ruler measurements which tap out more nuanced metres from other wall-mounted speakers, laying polyrhythms across the space. 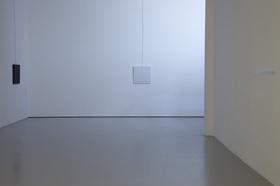 With each position one takes in the outer space, the sonic matrix shifts in emphasis. As one turns the second corner another flat directional speaker soundtracks a projection of the video Studio (2007) at the far end of the corridor. Here, one sees and hears Erek's fingers as they attempt to tap out an electronically produced rhythm transcribing a timeline of life events, adding a faulty, human syncopation to the resounding, regular rhythms. Placed near the drumming fingers, the camera frame is made to wobble according to the irregular beat. But as one moves towards the projection, another pulse, generated by a traffic crossing system to help the blind, reinstates the machinic regularity of the sound 'grid'. A small plaque – one of three placed around the gallery walls providing fragmentary textual references in the format of Spike Island's exit signage – confirms its tempo as '60 bpm'.

At the other end of the outer rectangle, Week (2012) is arranged as a sleek pyramid of four white speaker units from which a tripartite loop beats out the Fordist working cycle as a 7/8 loop. First, the days of the week are recited by a computer voice, then a kick drum pulse obliterates the identifying prefix of each day's first syllable. Lastly, both syllables are replaced by a pure kick and hi hat alternation. Measure here thus alternates between language and pulse. From an adjacent wall another piece, produced by Bristol duo Emptyset, interprets Erek's Ruler Rhythm 1 (2011) in shards of static fuzz. (On the opening night, Erek presented a hooded performance that drew the audience from space to space, as he hammered out an imperfect human echo of the recorded rhythms' grid on various unamplified drums. The next weekend, Emptyset's performance – brutally loud signal processing – transformed the darkened space into a frenzy of heads metronomically nodding in time with the audio-triggered distortions of a triptych of video projections on the wall behind.) 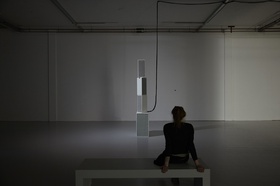 Rhythm is a movement marked by different elements alternating in recurrence: the up and down of those bobbing heads, of a sound wave, of night and day. Even the untranslated enunciation of the exhibition's title scores this beat. Meaning 'below/above', the title also refers to the reconfiguration of the gallery's central chamber, also titled Alt Üst (2014). Spatially and conceptually the heart of the exhibition, this large-scale architectural intervention splits this space, inserting a scaffold floor at just above head height. Beneath it, the 4/4 beat, stripped of all embellishment, that has already been heard at a remove plays in surround. Attached to the bare scaffold poles of the false ceiling, an LED strip, Day (2012), seductively throbs stripes of blue light into the darkness. The fundamental elements of a nightclub are convincingly rendered, but dance music's Dionysian promise is a vampire here, barred by the incongruous opening hours of the space. Above, accessed via a scaffold ramp that runs around two walls of the chamber, is an empty space, whose whitewashed walls and plywood floor are flooded by natural light from the glass gallery ceiling. Here, the higher sonic frequencies, which traverse the outer space are inaudible, while even the bass from below has been carefully proportioned so that only the first and third beats carry through the floor, returning the pulse to 60 bpm. Aided by the serenity of white light, the beat evokes the slowed heartbeat of deep meditation. Contrarily, given the regular pulse of the exhibition, a sign says 'arrhythmia', referring to a process in which the interruption of electrical signals across the heart produce distortions of its normal rhythms, drawing attention to the visitor's internal pulse and the possibility of rhythmic collapse.

Throughout, the irregular, continuous and eddying temporalities of becoming are the off-beat to spatialized representations characteristic of Western structures of thought which have always privileged visual over acoustic space, fixity over movement, perspective over immersion. Indeed, the rhythms of night and day or week and weekend seem to oppose that which evades reason – dancing to drums, for example – to the Apollonian qualities of measure, perspective, and logic. However, in the additional meaning of 'altüst' as 'upside down' or 'mixed up' such binaries fall apart. Natural light glints through cracks in the false floor/ceiling and the carefully calculated artificial pulse of the basement LEDs (which in fact represent the changing sum of daylight in Bristol over the course of the exhibition) signals not the abandonment of the day, but the precise geometry of earth and sun. Likewise, the social architectures of factory, museum and rave are blurred in the sounds, imagery and machinic body movements of dance music's most minimal forms, and in Spike Island's own past and present modulations. In an exhibition that almost eroticises the loudspeaker and apportions space as much with precision surround sound as with physical structures, one might expect to feel immersed. But this sensation is counterpoised by the careful calibration and balance demanded of spatial practices and sound engineering, and in sounds stripped to pure rhythm. Alt and üst are not opposites but, constituting rhythm, we might rather say that they present interfaces for exploring that Nietzsche called 'the very form of time' in all of its multiplicity. 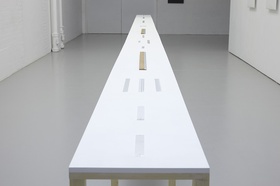 For Nietzsche, rhythm is the form or structure of becoming; precisely becoming's translation into time. This recalls Ruler and Rhythm Studies (2007–11), fifteen Perspex and wooden rulers laid out on a bench included in the show that comprise the work. The piece proposes differing measures of time: subjective, cultural, planetary. On one, day and night are marked with alternating spaces of black and white. On another, a Perspex disc allocates the proportions of the week and the weekend – the cyclical ups and downs of Fordist production – suggesting how modern time became abstracted from life as its intervals were externalized and standardized. Other rulers refer to specific cultural timelines, another standardization marked as the historical dates of Turkish adoption of the Gregorian calendar and Latin alphabet, while on the wall a new piece, Ruler Centenary (2014), indulging in gentle word play, is crafted from a local cedar, whose tree rings span 100 years, impassively recording geopolitical rhythms. Above this piece the date '1914' is marked in pencil. The gallery guide tells us this references the UK's public commemorations of the 'Great War', but in the parallel history of Erek's native Turkey, 1914 signals the collapse of the Ottoman Empire (such cultural and formal questions of translation recur throughout). Other rulers measure opaquely personal date ranges, or partition the space between '0' and 'now'. One simply marks 'now' at one end, with the remaining span of Perspex refusing to submit the future to metre. Shown together, the rulers propose a polyrhythmic interface that reduces the tempos of life and consciousness to a series of discreet spacing exercises.

Translated across multiple forms and scales, these concerns resound – quite literally – throughout the exhibition. The rulers seem to add up to a partial measurement of Erek's own life in process. His ongoing concerns with space, with sonic architecture and with rhythm can be extracted from his own biography – as architect, sound designer, and as the drummer for Istanbul band Nekropsi. However, what illuminates his exhibition for me is the compelling representational proposition it makes for spacing time and timing space in order to measure and model the moving target that constitutes a life.

Alt Üst is one show at Spike Island, Bristol, until 13 April 2014. For more information, follow this link: http://www.spikeisland.org.uk/events/exhibitions/altust/

Alastair Cameron is Associate Curator at Arnolfini, Bristol. Other curatorial projects include the Film Exercise (with Bridget Crone). He holds a MA in Aural and Visual Cultures from Goldsmiths.