The vigilance of a critical machine guarantees the smooth and uninterrupted operations of a production chain. It is a machine whose function is to monitor other machines. What is this machine in the art world, and how would it function? The expansion of the Middle Eastern art world in the last decade urgently calls for such critical scrutiny. But in an era swallowed almost wholesale by capital, can criticism, or art for that matter, provide any kind of 'critical' insight into its own system? Rather than critical machines that sustain the operations of the bigger art world machine, shouldn't we desire critical machines that impair it, which sabotage rather than safeguard? 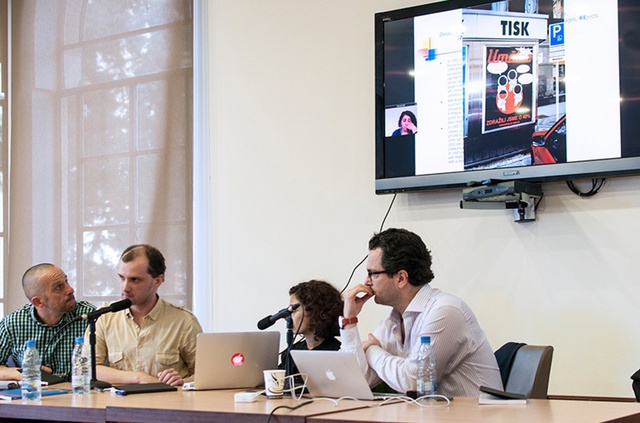 40 years old, October inaugurated the conference with a presentation by David Joselit on the journal's history and role in introducing post-structuralist theory to an American art world. If the journal's initial mission was to complicate, formally and theoretically, the viewer's relationship to art, it has now established itself as a critical, academic and canonical  magazine. (Though these two words, critique and canon, are hardly reconcilable.) Joselit referred to e-flux journal as a possible new model for thinking about critique and art today, though Anton Vidokle's thriving magazine is not a critics-talking-about-artists kind of journal, but rather publishes pieces that stem from conversations between friends, mainly artists. At the conference, Vidokle read a daunting manifesto that both celebrated and declaimed against the end of the welfare state, dire contemporary labour conditions, and the collapse of public institutions. Life is a permanent free fall, and e-flux embraces the buoyancy of the present. It also exploits the neo-liberal machine admirably, being one of the most successfully funded art journals of our time. Whereas October positions itself as a historical object on the cusp of modernism, e-flux exists in a present that is post-history.

Notions of history and the present varied from one editorial project to the next. Art Margins, a new academic journal published by MIT press, challenged the Euro- and American- centrism of journals like October by rethinking historiography and art history on a global scale, and more specifically in regions that were once marginalized, such as Eastern Europe or the Middle East. Reflecting on this somewhat was Vardan Azatyan, the editor of the Armenian e-journal Arteria, who read a paper via skype on Romanticism and necessity, positioning his editorial project in relation to – but also outside – a contrived art world and its English monolingualism.

Questions of the public sphere, readership and languages were brought up transversally in a few presentations. Roy Dib from Al Akhbar's cultural section talked about his desire to introduce experimental Lebanese art to a broader audience, and mentioned how the absence of technical art terms in Arabic – he gave the example of 'site specific' – made the task difficult. Mada Masr, an online newspaper presented by one of its editors, Lina Attalah, is an offshoot of Egypt Independent. Before splitting from the latter, Mada Masr's editors used to publish Indent, which featured artists' projects in a newspaper insert. For one of the issues, artist Azin Feizabadi commissioned writer Naira Antoun to re-write her article 'Mission Impossible' (published in Egypt Independent) as if she were writing from the future, 30 years later. Both pieces, the original and future re-write, were published in the same issue. This ambiguous play with reception, readership and genre brings together spheres and audiences in ways that few art magazines do.

Russian activist and artist group Chto Delat introduced their artist newspaper, which references the medium's Russian Leninist history. As a medium, the newspaper is historically connected to the public sphere and was used to reach a broader (so-called 'universal') audience. Can art newspapers reach out to unknown readers too? These questions of audience, reception and translation were especially prominent in the last panel featuring diverse publications like Cabinet, Al Akhbar, Bidoun, and Gahnama-e-Hunar. This singular lineup was in itself a critique of criticism. Though an art world magazine, Cabinet is not a magazine about the art world and its current trends or latest news. Its critical approach stems from curiosity: a desire to learn that is closer to science than to art.

On the same panel, Bidoun's senior editor Negar Azimi traced the creation of the magazine to a post 9/11 moment, and to the desire of extricating Middle Eastern culture from shallow representations. It is difficult and somewhat paradoxical to talk about Bidoun's agenda or mission, since its agenda is versatile, idiosyncratic, pop-ish, and irreverent; another form of critique. Like artist projects, these magazines are not about the world so much as they are about creating worlds.

Indeed, when comparing Gahnama-e-Hunar, a magazine published in Afghanistan, to the eccentricity and possibly elitist readership of magazines such as Cabinet or Bidoun, questions on the political were raised. And while these issues were being debated, Beirut's citizens and artists were marching in protest of a recent domestic killing (in Lebanon, rape is also legally tolerated as long as it happens within a marital bond). One can ask whether it would have been more political to take part in the protest than assist in an academic conference.

Nevertheless, what the conference made clear was that people live in different worlds, and magazines are an aesthetic and conceptual expression of these worlds. In some instances, during the Critical Machines conference, those worlds collided as they encountered one another.

Mirene Arsanios's writings have appeared in both arts and literary magazines such as Bidoun, Cura, The Rumpus, Ink & Coda, and Enizagam. She holds an MFA in Creative Writing from Bard College and runs 98editions, a small Beirut press dedicated to cross-genre writing.