The Sharjah Art Foundation March Meetings have over the past seven years become the go-to place for those interested in artistic practices of the MENASA region (and over the past two years increasingly beyond the region) to catch up on new projects, initiatives and current debates. Usually more informal and relaxed than the Global Art Forum, the discursive program of Art Dubai, the March Meeting has been an important platform of exchange and, indeed, of meeting.

Eungie Joo, curator of this March Meeting (MM2014) and of the forthcoming 2015 Sharjah Biennial 12 (SB12), capitalized on this idea of gathering practitioners, practices and ideas that are at the heart of the event, and titled this year's edition 'Come Together'. Read simultaneously as an invitation, a declaration and an imperative, MM2014 stressed the local emphasis on Sharjah first, and a broader engagement with the region thereafter. The programme booklet tell us that

[f]eatured speakers include artists commissioned for SB12 in the earliest stages of their research, positioning artists in discussion with Sharjah, eachother and the public from the outset of their projects. At MM14, these artists are joined by a number of inspired curators and scholars, which as a group, propose necessary perspectives, experience and investment in Sharjah and the greater 'region'. (emphasis mine).

Presentations on the history of cultural production in Sharjah, the architecture of Sharjah and the building of the collection of the Sharjah Art Foundation were cases in point. Yet somehow these presentations, no matter how important they may be for contextualization, always seemed a little forced and didactic. Has a conference in its 7th year, and a biennial looking to its 12th edition, outlived these ways of treating its locale, and aren't there more effective strategies available that underline and integrate the specificity of place throughout the curatorial and artistic framework and the programme, rather than setting them apart like this?

Another slight departure from previous editions was the choice not to focus on projects-in-progress, personally a favourite part of many of the meetings, but instead to revisit projects shown at previous Sharjah Biennials, such as works by Lebanese artists Rayyane Tabet, Tarek Atoui, Egyptian artist Wael Shawky and the Mumbai-based art collective CAMP. This was juxtaposed with showcasing past projects presented elsewhere by artists selected for the upcoming SB12, like Goa-based Nikhil Chopra, Danish-Vietnamese artist Danh Vo, Egyptian artist Hassan Khan, and South-American artists Cinthia Marcelle and Adrián Villar Rojas. There is certainly a value in looking back, and trying to tease out the artist's working process by peeking inside his or her portfolio, but without this being clearly articulated in the sessions' format, and without the connecting rationale apparent in terms of placing these particular artists with these particular projects next to each other, things seemed a little disjointed. For someone who has visited every Sharjah Biennial since 2005, it felt at times too much as a recap of past accomplishments, no matter how captivating some artists were in their account of a project. 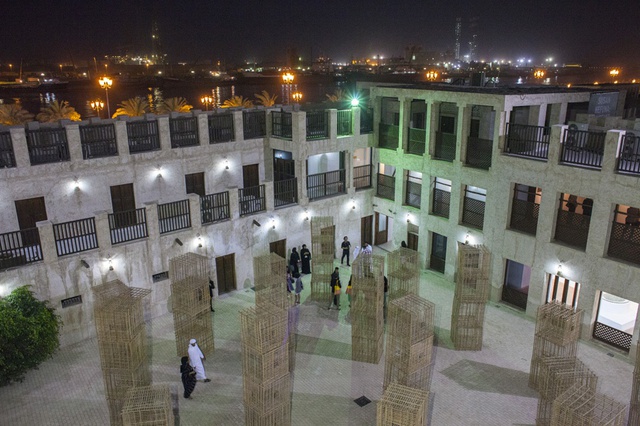 For Joo it was important to invite speakers who 'make art history in front of our eyes'[1], which explains the repeat invitation to veterans and prominent actors of the Arab art scene such curator Christine Tohme, the feisty director and co-founder of Lebanon's Ashkal Alwan, The Lebanese association for Plastic Arts; curator Tarek Abu El Fetouh who is also director of the Young Arab Theatre Fund; and Sarah Rifky, writer, curator and co-founder of the Cairo-based art space Beirut. For those acquainted with the contemporary Arab art world and to returning visitors of the MM and the Sharjah Biennial (and I spotted many), an introduction to the institutional practices and the general curatorial vision of Tohme, El Fetouh and Rifky would have been superfluous. It is a pity these key figures were not activated in a different way. Moreover, for first-time visitors or novices to the Arab art scene the presentations remained too decontextualized, presuming too much prior knowledge to engage with the conversation meaningfully. This was best exemplified by Tohme's highly performative conversation with artist and filmmaker Ahmad Ghossein. For the in-crowd Tohme's intentional namedropping, lambasting of patrons and funders, not the least of her interviewer Ghossein, proved to be highly entertaining, critical and humorously playful. For the uninitiated though, this performance was utterly baffling, as an exasperated Mexican colleague confided to me. A notable exception in the presentations, precisely because it problematized so many current issues explicitly, was curator Rasha Salti and Kristine Khoury's research presentation on the International Art Exhibition in Solidarity with Palestine held in 1978 in Beirut. Not only did it offer an exclusive insight in the difficulties of reconstructing the history of an exhibition when most of its documentation has been destroyed, but it also offered a reality check on North-South divides, and how in the 1970s art, activism, dissident and state ideologies interplayed. 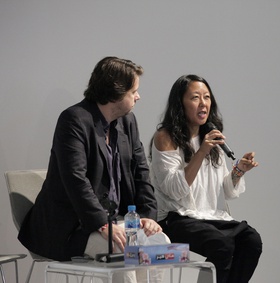 Perhaps the main issue with this year's March Meeting was that it was a little confused in how it adressed its audiences. 'Coming Together' is a nice enough invitation, but the contentious point of how we come together, from where and with what intentions, has to be addressed too, not only content-wise but also formally in the format and composition of the programme. Of course, there is something wonderful and incredibly generous in wanting to open up the meetings and discussions between the curators and artists involved in the next Sharjah Biennial to a more general audience. But in this sense, MM2014 is really to be regarded as a working session of the SB12 participants that has been made public, and unfortunately squeezed into the ill-fitting straitjacket of a conference. After all, the conversations biennial artists and curators have amongst themselves when developing a project together differs in tone and objective from the conversations had with a heterogeneous audience made up predominantly of regional and international art professionals. It seemed Joo wanted to collapse these different registers of exchange and discourse during the March Meetings. Though laudable, this is a very difficult thing to do, especially in a conference format that relays information in a very particular way.

Nevertheless, Come Together did come together during the impeccably organized communal lunches, dinners and coffee-breaks – moments when everyone communed in an unfettered way. If only some of that energy would have been translated structurally and conceptually into MM2014, the event would have been very different. Nevertheless, this year's March Meeting did shed light on the curatorial methodology Joo is bringing to the Sharjah Biennial: one that is invested in process, dialogue and openness. I am not sure the current format of the March Meetings was the right platform to harness these sensibilities, or whether it was the right time to do this at this very early stage of the project, but it does raise high hopes for next year's Sharjah Biennial.