Narratives and Ghosts from the International Art Exhibition for Palestine, 1978, at MACBA

Past Disquiet: Narratives and Ghosts from the International Art Exhibition for Palestine, 1978, is an archival and documentary exhibition curated by Khristine Khouri and Rasha Salti that intricately maps an intercontinental milieu of common mindsets of artists and activists who worked together in solidarity with anti-imperialist movements of the 1970's, from France to Iraq to Lebanon to Chile to Jordan to Morocco to South Africa and Japan. The exhibition, which unfolds on the first floor of the MACBA in Barcelona explores these artistic networks and their activities starting from The International Exhibition for Palestine organized by the Palestinian Liberation Organization (PLO) in 1978 in Lebanon.

Taking on the challenge of researching an undocumented history, Past Disquiet is described as a speculative story, excavated through the exhibition organized by the PLO in 1978. Upon entering the exhibition space, a large web of oral and visual narratives is presented though film excerpts, newspaper clippings, reproductions of posters, videos of archival photographs, conversations from the past and the present. In the center of the space is a video that leafs through the 1978 exhibition catalogue, which documents the names and works of the participants. Khouri describes this document as a central reference point throughout their research: one that both opens up questions and simultaneously points the direction towards possible answers. Where did the idea for this exhibition come from, and how can you explain the over 200 participating artists from so many different parts of the world? Was it unusual for the PLO to organize such an event in the midst of political upheaval in Lebanon, just a few years after the start of the Lebanese Civil war? How were the networks of artists, and thinkers activated across such far ends of the globe?

The exhibition maps out a hidden network of artists making their own creative system in the politically engaged, revolutionary spirit of 1970s: a network that is highlighted from the outset of the show, which begins with an introductory text presented alongside a list of artists who participated in the International Art Exhibition for Palestine in 1978. The list is long. More importantly, it presents us with an eclectic mix from different countries across the world that reveals both the size of the event and forces us to think of how this was organized in Beirut during the political context of that time. Simultaneously, there is a satisfaction to reading names like Claude Lazar and the Iraqi artist Shakir Hassan Al-Said (1925–2004), finally listed alongside one another as peers, and an even better feeling to know they were both investing in an artistic and political gesture of solidarity. The second notion is brought forward by the poster for the 1978 event, in which the title is written in five languages: Arabic, English, Japanese, German and French. On the one hand, the diversity of translations in these titles support the notion of a network of like-minded artists and activists around the world. On the other, each title offers a small variation in meaning. The Arabic headline says this is an 'International Exhibition for Palestine'. In English, it reads 'Art for Palestine'. In the French and German variations, it reads: 'Solidarity of Artists with Palestine'. These variations question the location of the political gesture, as Fadi Bardawil elaborated in his presentation during the seminar 'Palestine at/without the Museum: Loss, metaphor and Emancipation', whichfollowed the exhibition opening.Do these events placed the artist in the position of a militant, and on par with the fighter in the fields? And was the intention to produce a museum in exile that would play a part in the fight against the hegemony of imperialism? 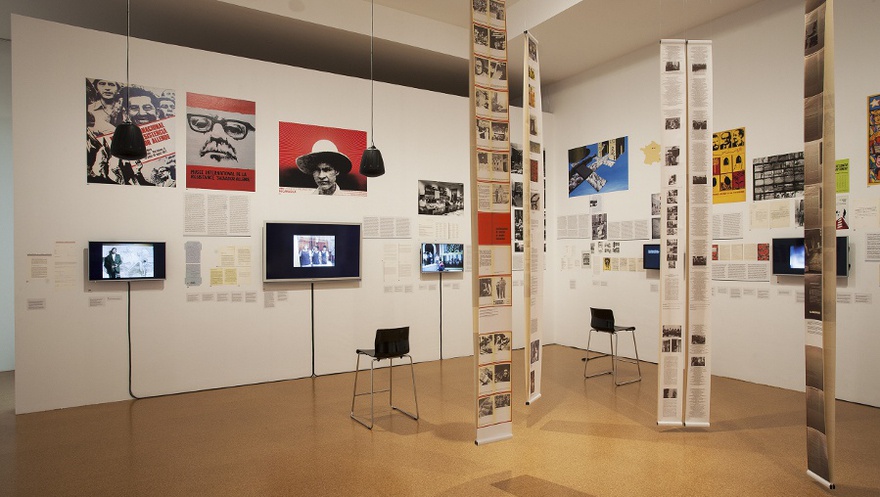 The question of location was expanded on through the unpacking of events that mirrored the original 1978 show from around the world. The International Resistance Museum for Salvador Allende,that was organized by the committee for artistic solidarity with Chile in 1972, for instance, to the Salone de la Jeune Peinture, an artist exhibition initiated by artists for artists in 1950 intended to be autonomous from the influences of the market, and the political arts magazine Souffles, which was published in Morocco from 1966 to 1972, until the organization was closed down by the Moroccan Authorities. These references help paint a picture of artists working against apartheid, anti-imperialism and injustice around the world. . For instance, there is a video of archival photographs that show the replacement of paintings depicting apartheid in the parliament of South Africa by works from the Museum of Apartheid in 1996. This creates a conversation with an excerpt of a film included in the show by Muhannad Yacoubi Off Frame (to be completed in 2015), which narrates a story of how artists perceived their role in the struggle for the independence of Palestine during the same time period. Khouri and Salti add their own voices to the group of narrators through voiceovers as audio pieces alongside the works, videos and documents that describe their own accounts during the research, thus weaving new chapters into the story. The hushed voices throughout the room from the different materials on display gives a sense of untold secrets: rumors transformed through Chinese whispers of unaccounted stories from over forty years, that have now been brought together so as to support and complement one another.

One section of the show includes portraits of people involved in the movement at the time, with an overtly present narrative of the life of Ezzedine Kalak, the representative of the PLO in Paris from 1972 until his assassination in 1978. Kalak was also a close friend of Lazar, and a strong advocate for the creation of a Museum for Palestine in exile, inspired by examples from Chile and South Africa. While the portraits helps bring together a clearer image of the people who were instrumental in this story, a central constellation in the exhibition space – based on an eerie image of Kalak in the exhibition in Lebanon – shifts the excited tone of the show. The photograph is taken of Kalak's reflection in a broken mirror, with the painting of a Kalashnikov accidentally pointing at him: a prophetic image that seems to anticipate Kalak's untimely death. Juxtaposed alongside the photograph is the poem In the Presence of Absence (2006) by Mahmoud Darwish, underscoring the unbearable sense of loss that pervades the 1978 exhibition project. After all, like the artworks of the exhibition that were lost during the Israeli bombing of Lebanon in 1982 along with all the documents pertaining to the show, loss is unfortunately the obvious theme in this history. Nevertheless, it is loss that creates an urgency to research and re-create an image of an undocumented story that counters a historiography that otherwise limits artists to genealogies branded by continents and ethnic identities.

Past Disquiet: Narratives and Ghosts from the International Art Exhibition for Palestine, 1978, is on show a MACBA to 1 June 2015. For more information visit: http://www.macba.cat/en/exhibition-past-disquiet.