The Politics of the (im)Possible

Sharjah Biennial 12: The past, the present, the possible

The opening days of the 12th Sharjah Biennial (5 March–5 June 2015) were, unlike previous years, a quiet and intimate affair. Perhaps this was due to the March Meeting, the biennial's annual symposium, being postponed to May or the Emirate's major art fair Art Dubai being held almost two weeks after the biennial's opening and internationals opting for a fair and biennial combo. It made for a calm, tranquil and at times bizarrely solitary viewing experience: no jostling for seats at video screenings or craning of necks for wall pieces. This suited many of the works, which were poetic and contemplative in nature, quite well. And yet within all this serenity something was lacking and something fell flat. Was it the refusal of curator Eungie Joo and associate curator Ryan Inouye to provide a curatorial framework for this edition, thus making the works feel disconnected from each other and making the audience solely rely on the curators' choices without any further motivation or further positioning? Is it, in a time the curators themselves deem a 'particularly decadent and disharmonious moment in human history', enough to provide mere whispers and gestures rather than outspoken and bold statements, with the noted exception of a few works? Or perhaps was it that in the absence of a curatorial theme, the focus on Sharjah as a site that 'can help us imagine and reflect upon its ambitions, possibilities and being', felt all but a bit forced and left the works that did not directly deal with Sharjah just a little devoid of context?

The past decade has produced biennials from Berlin to Istanbul and Sao Paolo that have predominantly focused on big political and social themes. It is therefore refreshing and commendable to see curators plead for a return to the realm of the imaginary and of wonder that artistic practice can instigate. Nevertheless, these imaginaries or 'meditative pauses' as Joo names them, still in some way or other require a degree of definition. And that's where this very compact biennial did not quite deliver. With only fifty-one artists participating, the conditions for forging concentrated and complex relations and interconnections between the various works and practices would have been ideal. However, this was not made explicit. If drawing connections and identifying possibilities between the past and the present were among SB12's objectives, then whose past are we talking about, and whose present? Showing the grande dames of Lebanese art such as Etel Adnan (b.1925), modernist Saloua Raouda Choucair (b.1916), Turkish avant-gardist Fahrelnissa Zeid (b.1901) or the very political work committed to the struggle of the Palestinian people of Abdul Hay Mosallam Zarara (b.1933) will always have great value. But including them to merely illustrate the practices of the past undoes the geo-political, artistic and historical specificities that shape their works. Moreover, it is unclear how these works speak specifically to the past of Sharjah or the UAE in general.

The strongest works of the biennial were those that incorporated elements of the local context indirectly instead of offering a direct response. Take for instance, Taro Shinoda's desert-inspired Japanese garden karesansui (2015) that used local materials, more specifically sand, to construct a dry landscape garden. As the wind blows, the craters in the plain of sand deepen and beautifully show the slow passage of time. Damián Ortega makes physical and communication boundaries porous in his architectural sound piece Talking Wall (2015), which is based on the fossilised coral walls he encountered in the Heritage Area in Sharjah. The set of three low, curved walls with interconnected openings bored into them function simultaneously as speaking and hearing holes, yet also act as barriers and frustrate the free flow of movement. As such, the piece is wonderfully contradictory: the walls invite an openness of communication, but only work if interlocutors stand apart at a distance. These two pieces are good examples of how a material specificity found in Sharjah is transcended and translated into a more universal comment. Or consider Rheim Alkadhi's subtle but very evocative gesture of collecting eyelashes of sea labourers who work along the Sharjah Creek and fixing them together on a strip to make up a strand of eyelashes. With every eyelash a different narrative, and literally a point of view, is connected to the other. We can only imagine how unsettling the artist's initial conversations with these labourers must have been and how a bond of trust must have grown for the labourers to agree to donate something as personal and intimate as an eyelash. The frailness of this exchange is artfully scripted in the fragility of the work. 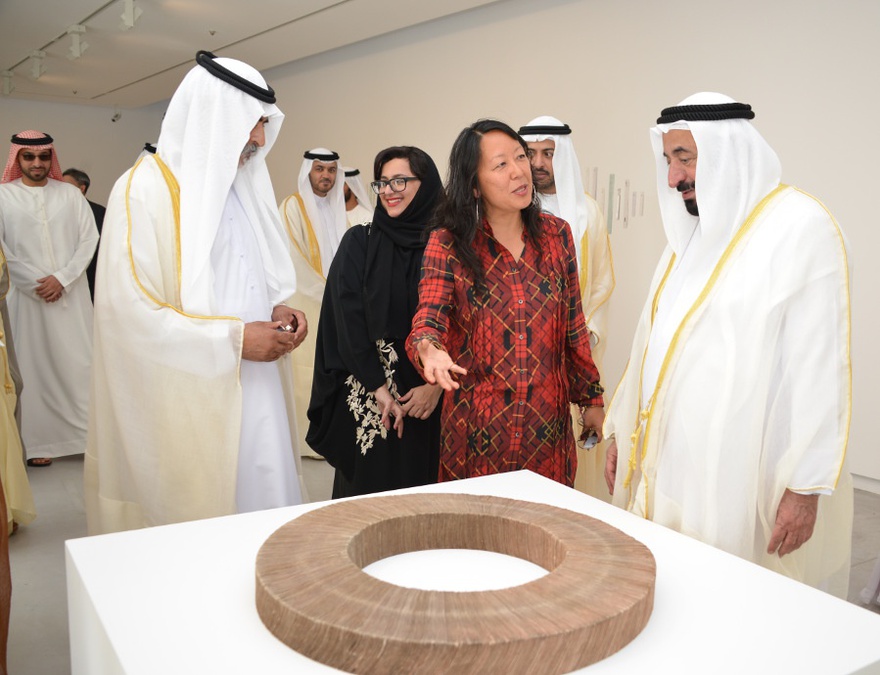 In its 24th year now, the Sharjah Biennial has earned its stripes among the biennials of the world, yet this has not been without controversy, as I have written elsewhere on Ibraaz.[1] This has to do with sensitivities, political and otherwise, that have become more pronounced since 2011. The eponymous 'possible' is therefore always bound to the geopolitical limitations of place. The biennial through its various iterations and with its respective curators has attempted to stretch these limitations but alas, there's an increasing coyness in challenging them. Telling here is the title of Brazilian artist Cinthia Marcelle's performative installation AT THE RISK OF THE REAL (2015), probably the politically most critical work in the biennial, which deals with the construction boom in the Gulf and the plight of migrant labourers. Marcelle created a wooden beam structure covered with large sieve frames. At set times, as if a choreography, sand is swept through the sieves and a veil of dust flutters down. The assistants manning the brooms can be heard but they cannot really be seen; they are an invisible labour force. It is slightly uncomfortable because the scene is all too reminiscent of reality in the Gulf. Turning this into an artwork underlines the complicity of the viewer, and perhaps that we all too easily and willingly allow dust to be thrown in our eyes.

Other memorable works broke formally or conceptually with the politics of institutional representation. The display of Rayyane Tabet's Steel Rings (2013–) in an entire wing of the Sharjah Art Museum was brilliant and daring. The work is part of a larger project by Tabet on the Trans-Arabian Pipe Line (Tapline) that was initiated in 1946 with the idea to transport oil over land from Saudi Arabia to Palestine. The creation of the State of Israel in 1948 and the 1967 war had to effect that the route of the pipeline ended in South Lebanon. The pathway of the pipeline not only reflects the region's geography but also its political turmoil. The project was abandoned in 1990 during the First Gulf War. Each steel ring is engraved with its geographic coordinates and the distance from its source in Saudi Arabia. At the museum the first 60 kilometres are represented. Not only do the engraved rings lend a brittle monumentality to the history of the Tapline but they also challenge the architecture of the museum and drive home the point that oil is what drives wealth, and subsequently the 'possible', in the Gulf region. Within the context of a well-funded biennial, this becomes particularly self-referential. I just wish Joo had employed this inspired way of installing in the museum's other wings. Granted, with its many consecutive rooms, the Sharjah Art Museum is not an easy space and there is definitely an argument to be made for giving artworks the breathing space they need. However, regardless of the quality of the works in the other wings, in particular the wonderful cheeky instruction manual-like canvasses of Beom Kim, the works felt silenced. As if all the pieces that could belong on a wall in a museum were indeed placed on a wall in a museum. The institutional framework became a little overbearing and the viewing experience a little insipid, precisely because of the acquiescence in the museum's architecture.

SB12 might not have been Sharjah's most pronounced biennial but it somehow reflects as much on impossibilities as it does on possibilities. The impossible always being the more challenging option to aspire to. By insisting on the possible, SB12 skidded the thin line between understated and underwhelming.

Where Are We Now?