Artists: Click on the names below to visit each artist's section

Click on the links below to visit each section

Gaza has become a geography that is associated with images and connotations of con nement, violence, terrorism, poverty and death. The circulated knowledge about Gaza, whether derived from international media, Israeli political and army sources, or even from Palestinian NGOs and cultural producers, has all been subsumed within linear 'victim/oppressor' and 'action/reaction' discourses, whilst rendering Gaza as an introverted confinement. This parallel exhibition in Gaza is an integral part of Cities Exhibition 5: Chapter II – Extended Geography. It is a collaborative research between artists, curators and students, investigating Gaza throughout Palestine's extended geography, covering the Gaza Strip, 1948 Palestine, the West Bank and Jerusalem. The inquiry of this chapter examines the notion of reconstruction as an issue that transcends the territorial demarcation of the place, whereby other comparative historic and contemporary examples can be probed. These collaborations follow a methodology of paths, trips and travels in the Palestinian archipelago in pursuit of an inquisition on the reconstruction of Gaza.

Chapter I – Research from Afar

A student-based research on the reconstruction of Gaza. Students have examined their position as researchers vis-à-vis the notion of a remote inquiry about Gaza. How can one investigate an inaccessible place? How can we read the mass-produced images on Gaza after the Israeli assaults? Are we entitled to suggest authoritarian propositions of fixed solutions for both the destruction and reconstruction of Gaza?

Chapter II is a collaborative research between artists, curators and students, investigating Gaza throughout Palestine's extended geography covering the Gaza Strip, 1948 Palestine, the West Bank and Jerusalem. The inquiry of this chapter examines the notion of reconstruction as an issue that transcends the territorial demarcation of the place, whereby other comparative historic and contemporary examples can be probed. These collaborations follow a methodology of paths, trips and travels in the Palestinian archipelago in pursuit of an inquisition on the reconstruction of Gaza. Click here to see Chapter II in Ramallah.

Chapter III – An Eye from Outside

Gaza – Reconstruction is an edited publication that accommodates the research material, and all the works produced in the three aforementioned chapters. The book is an assemblage of academic articles, artwork, research, documentation and images compiled since the inception of the project in September 2015 until the opening of the exhibitions in October 2016. 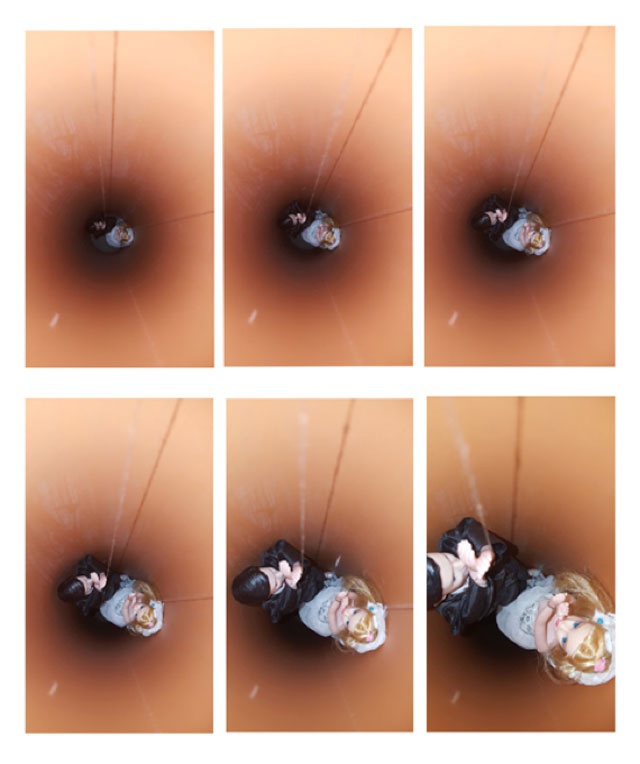 Rafah is one of southern Gaza Strip cities. It is closely connected with Egypt due to its location in the vicinity of borders. Rafah is famous of its tunnels that have been digged during the siege period. Youth has make weddings down there after they lost hope. Speaking about marriages via the tunnels is not strange in south Gaza. Freedom of travel and mobility cannot be separated from the human dignity. 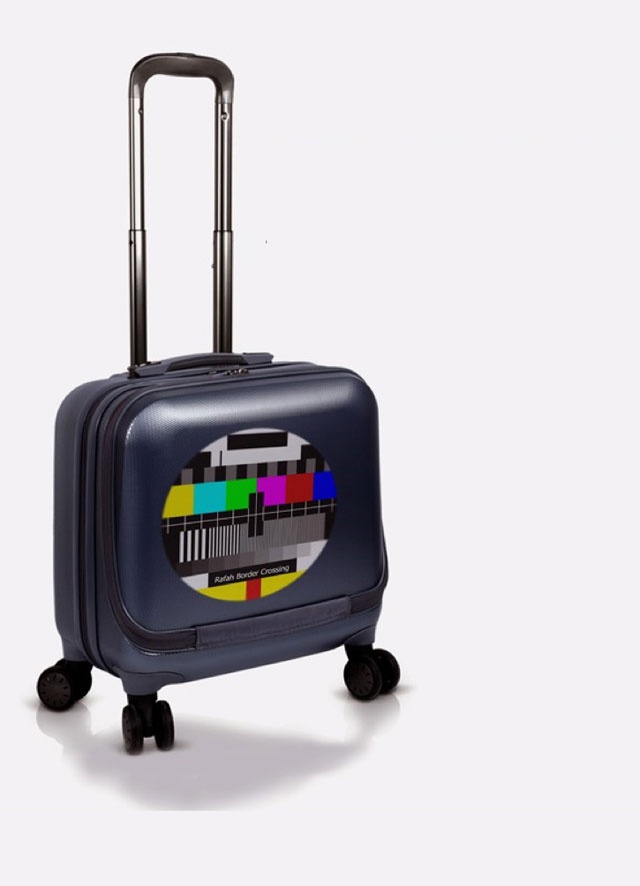 Article 13: A movie poster that mimics the right of people to full freedom of movement and travel, highlighting one of the most humanitarian issues in Gaza Strip. The poster of this imagined film tries to restore the ancient past of Gaza and bring life to cinemas, which have become deserted places and nothing is left of them except their names. 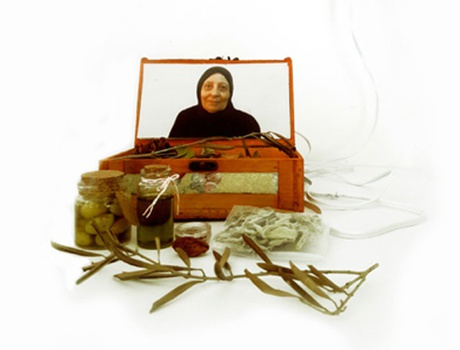 The project is a conversation with my grandmother recorded with music from a music box in the background. The box has been redesigned, and a small sculpture of Jules has been put in the middle of it. The viewer will listen to music from the box and to the voice of my grandmother as she described the beauty of Jules. 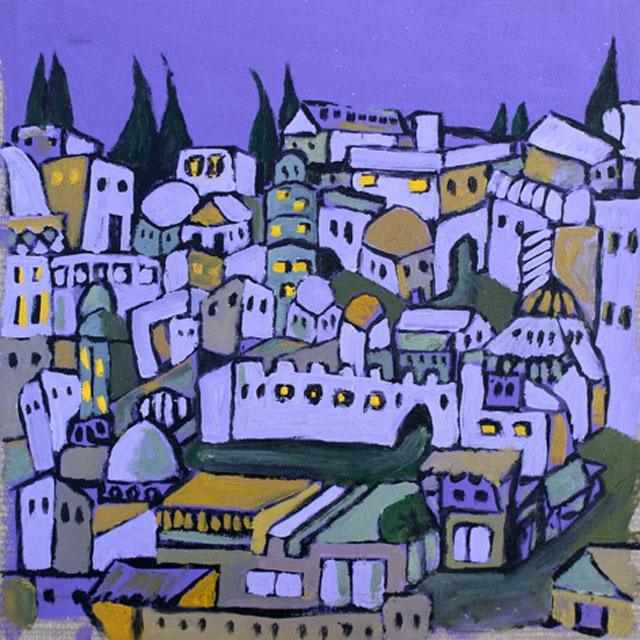 In the old times, construction of houses were distinguished with their non-straight lines and sometimes zigzags, which suggest simplicity and lack of affectation and gives you feelings of calmness and tranquility. Nowadays, lines of buildings on the exterior surface differed and decorations varied. Lines became straight, sharp and more solid. Such kind of construction makes us more formal in our relations with each other and created different classes of people. Moreover, the shape of lines has the greatest influence on soul and spirit.

The idea of the project explains the depth of feeling of the structure of lines and shapes, their differences and evolution from generation to generation and their strong relation with the culture of the society and surrounding environment as well as their influence by the outside world and the eras that Gaza city went through and its architectural development. The work shows the image clearly and explicitly in a simple artistic style with high transparency. 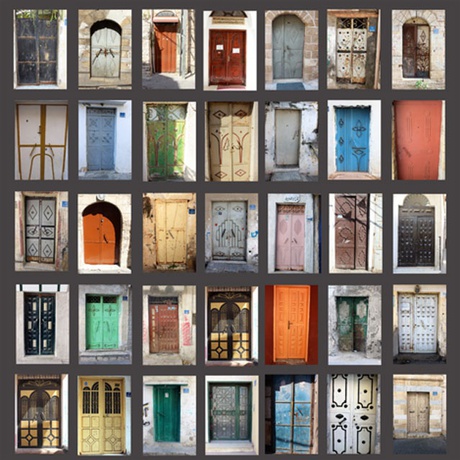 A house is known by its door

Door decoration gives an impression about the social status of the people living in the house. This  artwork displays doors to give metaphysical dimensions and open up other worlds … wide … beautiful or full of questions. My artwork is connected to time where capturing a photo has a particular event that imposes itself when we knock on the door of the house or smell its scent.

There is no doubt that the door in our lives is the gate to enter or leave the place of residence, workplace or a building we constantly visit. 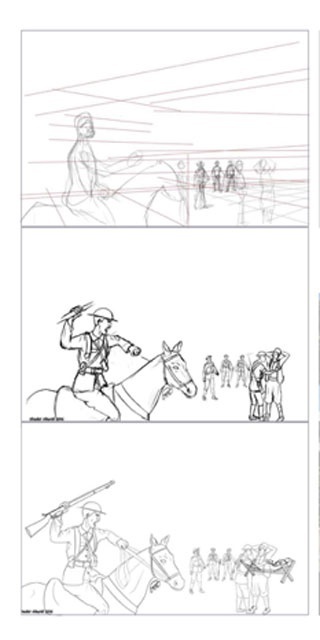 Gaza, the Past the Present

I have noticed that the past is often handled separately from the present and vice versa, especially in artworks. Hence, the idea of merging the past and present together in one artwork through which I reflect the originality of the archeological building came to my mind. Thus, I chose al-Basha Palace as a starting point for a series of works I intend to accomplish in the future. For this purpose, I took a photo of the palace. Then I imagined a historical event happened or may have happened for this archeological building. The event I chose was the Great Palestine Revolution during the British Mandate. I imagined a check point placed in front of the palace, which was used by the British as a police center. I intentionally avoided exaggerating history, so as to be convincing for the spectators and focus on the artistic value of the work. 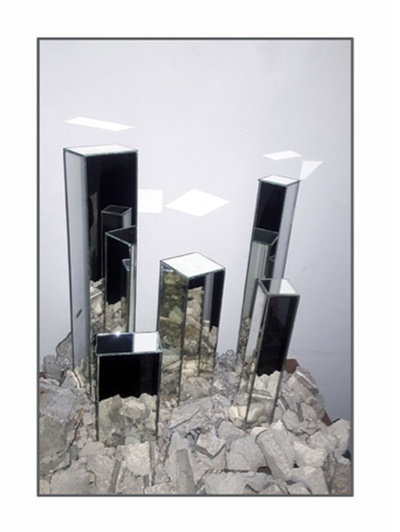 An artwork that shows destruction and rubble of demolished. From among the cracks and clefts of stones and debris a construction of glass mirrors will rise that represent the neoliberal reconstruction and development–  the dream I hope to come true someday.

Singapore Gaza has been re-iterated in many speeches of the late Yasser Arafat– Abu Ammar– when he returned to Gaza Strip following Oslo Accords. Gaza will be Singapore, we are witnessing this dream coming true. 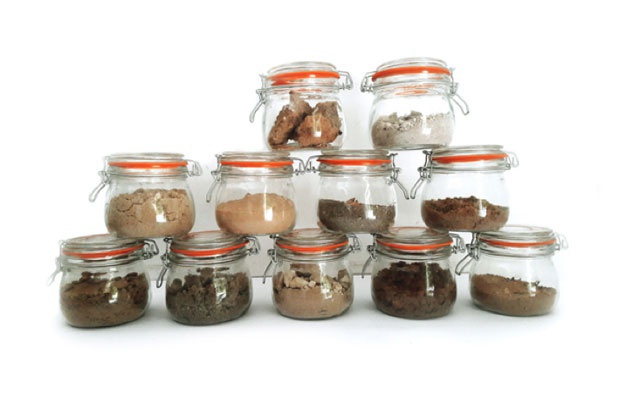 An artwork that examines in the soil of Gaza, the origin that embraces agriculture and on which construction takes place. Gaza land is specifically a part of the extended geology of the cost. This soil comes in different shapes, composition and texture which is the reason of this great biodiversity in Gaza.

A Handful of Soil presents the types of this soil in small transparent jars that reflect the colour, components and texture of this soil such as sandy soil, lime soil, clay soil, brown reddish soil, debris soil and others.

It should be noted that each type of soil will be collected from a different place according to its type. 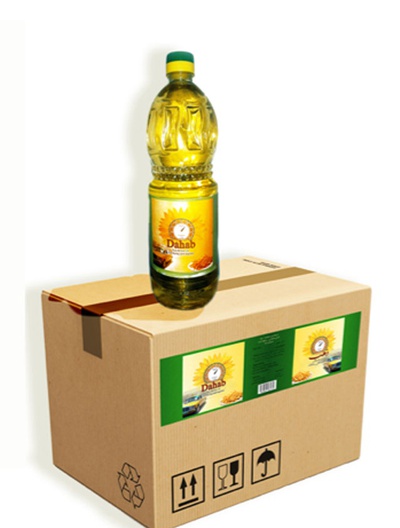 The Seven Wonders of Gaza

The Seven Wonders of Gaza project presents the many circumstances which Gaza currently experiences. I wanted to highlight the oppressive siege imposed on Gaza. In my work, I spoke about the cut-off of fuel and the resulting crisis of transportation when some drivers were obliged to use the cooking oil as an alternative to move their vehicle. This idea succeeded and oil salesmen replaced the fuel stations.

This substantial work would not have been possible without the passion and endeavor of the exhibition curator, the artists, initiators, individuals and collectives, participating students and the BZUM team.