This Sea is Mine: Amman

This Sea is Mine

Artists: Click on the names below to visit each artist's section

Click on the links below to visit each section

For the first time since its inception, Qalandiya International is widening its geographical outreach by inviting Palestinian organizations in the diaspora. This expansion is closely linked to this year's theme 'This Sea is Mine', which opens up discussion around the Palestinian right of return. Darat al-Funun/The Khalid Shoman Foundation is proud to participate, and has commissioned seven Palestinian artists based in Amman to each make a new work responding to This Sea is Mine.

Artists Adnan Yahya, Hani Alqam, Jehad al Ameri, Mo'awiaBajis, Raed Ibrahim, Saba Innab, and Mohammad Shaqdih reflect on different elements of the theme in a variety of ways. In their interaction with each other, the works form a range of personal perspectives, unveiled truths and entwined questions. As an integral part of our curatorial approach we also bring in two filmmakers we have supported, showing Salt of This Sea (2008) by Annemarie Jacir at the exhibition opening on 05 October 2016 in the presence of the filmmaker, while on 11 October 2016 Kamal Aljafari will be present at the screening of his latest film Recollection (2015). On 22 October 2016, Ramallah-based artist and curator Yazan Khalili will cross the borders of separation to join those in exile for a talk together with all the participating artists. 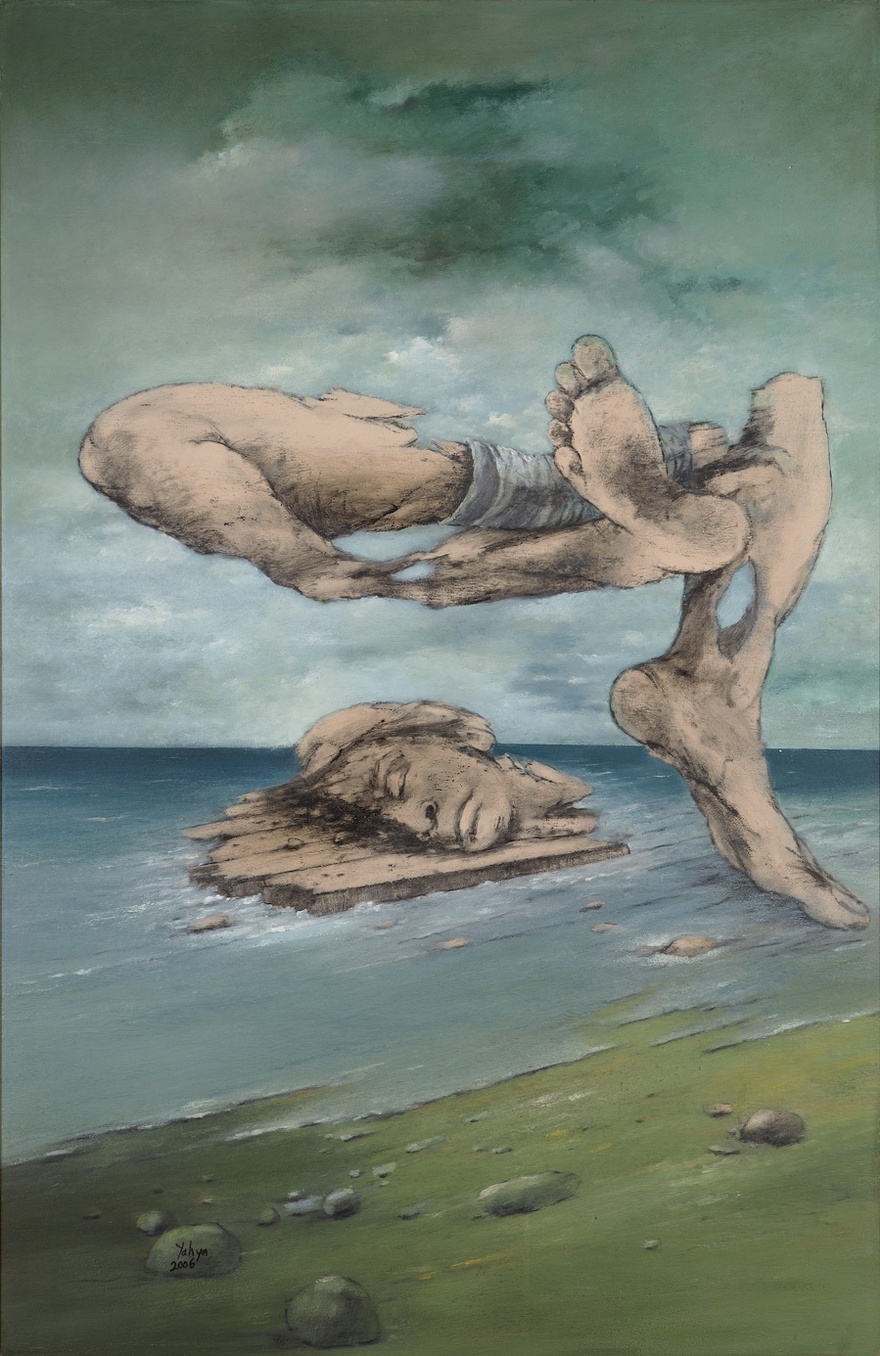 What is drawn can be considered visual research in the deconstruction of material, and the reconstruction of it anew. In an attempt to get closer to the long Palestinian history by way of the aesthetic reality, we try to understand the Qalandiya project as a bet that does not request permanence, and returns us to the problem of the original reality of destruction of the separated and tortured Palestinian body, and to a sense of loss of justice on this earth. 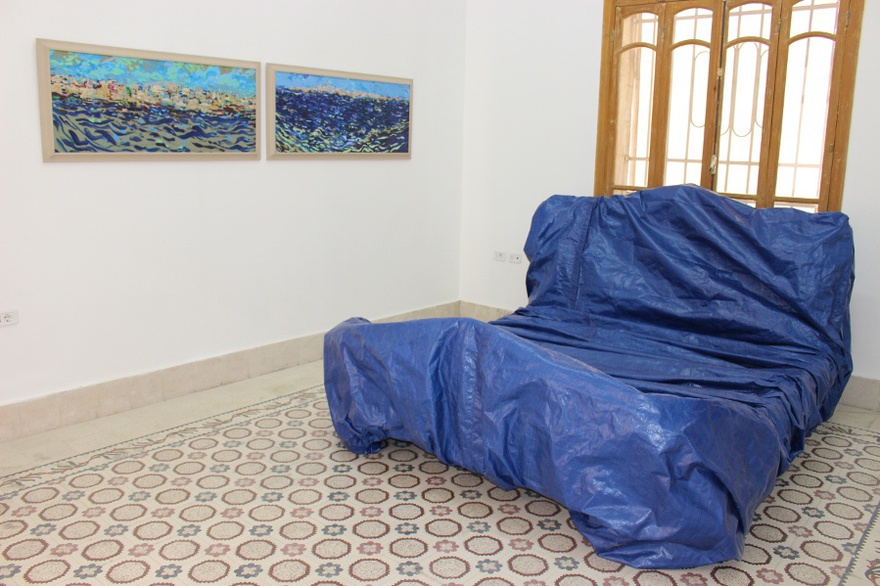 The sea, its blue color, its clouds, its space

It is where I store my dreams so it can sleep like a mother, tired from the travel of nations

It is whom I hug like a night of lovers, fearing otherness in its heart

It is the blue sea, my blood and my flesh

The Return to the Sea

This work was carried out as part of a series around the topic of the return to the sea, and uses applied graphic art techniques, silkscreen, and woodcut printing. These techniques serve the artwork by demonstrating more than one level of printing and colouring. Additionally, the use of maps dedicated to the subject and content speak of the Palestinian rights and the denial of the sea.

The piece works primarily on two fronts: the emotional passion towards the stolen sea through the use of the map that indicates the Palestinian geography with its villages that either disappear or change names, and the second issue being the political message transferred through the poetic text.

The impact of the salt in the sea of Palestine is traced by the dialogue between the texts and the work, and the presence of the sand in the sea that travelled from Akka to the exhibition space in Amman. 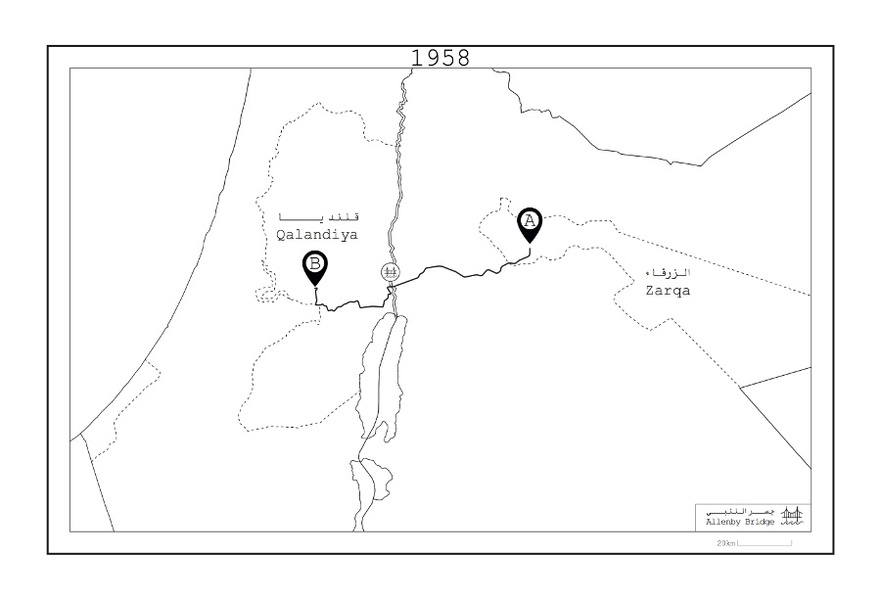 The closest distance between two points is a straight line. This line curves and bends over time. But perhaps time is not the primary factor that makes its bends larger, but rather the political events that occurred during this time that enforces it.

My family's journey line begins in Palestine and goes to Jordan and back in 1955 when my grandfather was enlisted in th e Arab Jordanian army. At that time, the distance between two points was actually closer to a straight line, but every time politicians attempted to straighten the line, it's meandering increased.

Today, and now that the lines have become many, and after the bends have become zig zags, nobody knows which lines are closest between two points and how long it will take to straighten the curves. Should we search for a new line or return to our original one? 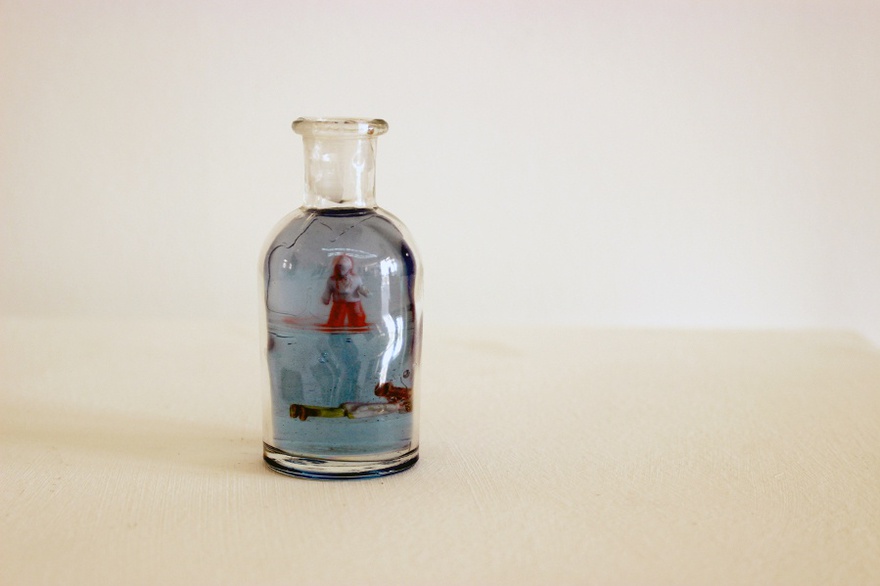 - Body mass is constant in any place and at any temperature.

- Density is a unique physical property of a material at constant temperature.

- If the characteristic density changes, this is evidence that the substance is not pure. 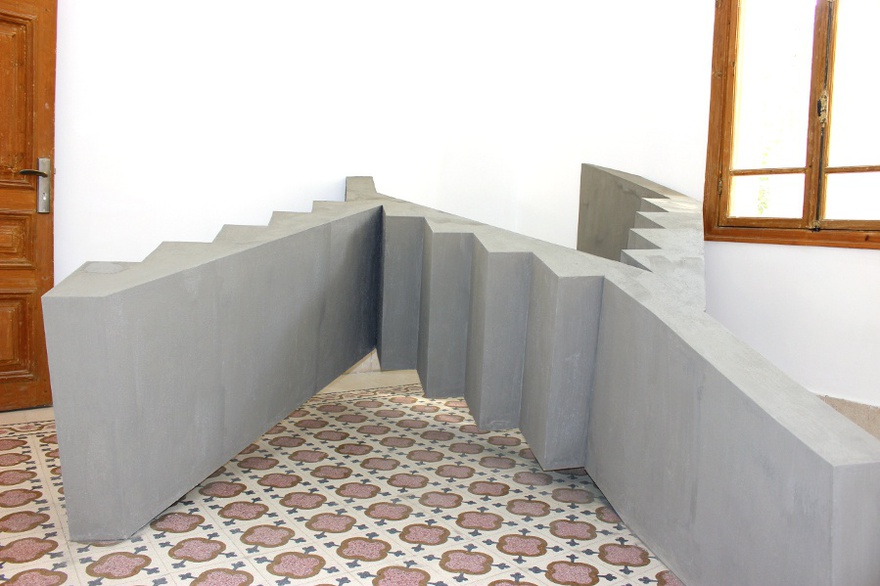 Time is measured by Distance, 2016

'The memorials which your own and other nations have once had of the famous actions of mankind perish in the waters at certain periods; and the rude survivors in the mountains begin again, knowing nothing of the world before the flood'

Water, as a space, had triggered constant longing for knowledge and philosophy in ancient civilizations, it's something embedded in its essence. Astronomy and arithmetic responded to practical calculations and night-sailings; for each of these branches of knowledge concerns the merchant and the sailors. It is the Mediterranean Sea that crystallized knowledge that once embraced the cosmos, its logic and powers. However, it had also become the embodiment of a space where the straight line between two points is no longer possible. What was once a pile of salt is now the undefined space, distance and time.

As the verse by the poet Abu at-Tayyib al-Mutanabbi says, things are better recognized/realized by their contraries ( * ‫) بِضدِّها تتبیَّ ُن األشیاء‬. Our perception of a thing is tied to its opposite, we see movement because we are still; a gate is a gate because it closes… It is life, because we die.

Everything became the possibility and its opposite; the sea is and is not the movement, it's a dysfunctional time and space. What becomes of building and dwelling between the imagined and the real and between the temporary and the permanent? How do we dwell when we are always on the limit?

The vertical and the horizontal are investigated as an impossibility; an impossibility of movement which is constructed through creating the thing and its opposite - the staircase is an oxymoron.

'You are born anywhere, anyhow. You die anywhere from anything... It's a world with no space.'

– Frantz Fanon, The Wretched of the Earth 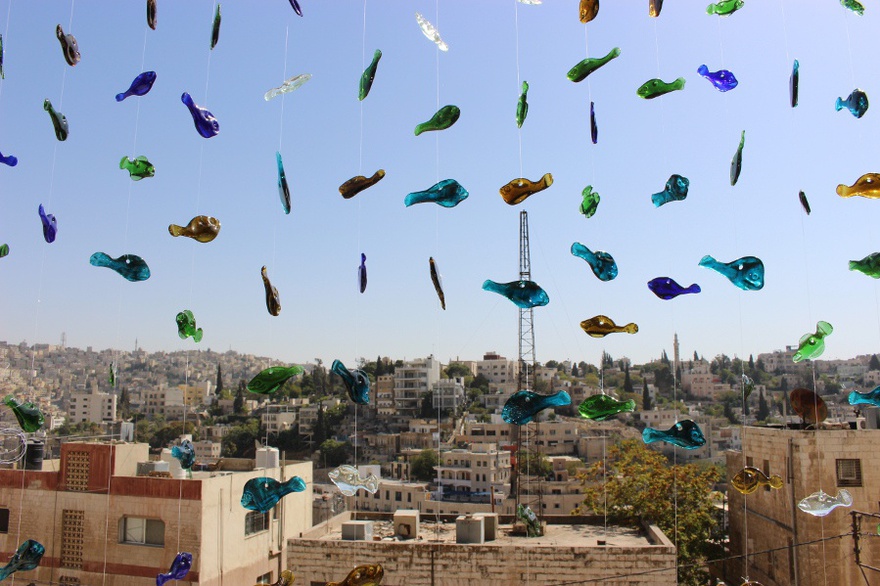 The Fish of Hebron

Hebron, where no window overlooks the sea and no door opens onto the harbor. From its alleys came the Fish of Hebron, shaped by a craftsman haunted by his love of the sea and sold by a grandson on a day unseen by his grandfather.

His fish dispersed along the paths of exile... Fish of Hebron, yearning for exodus in a waterless beachless city, suspended between structure and sky, still dreaming of its seaward return – perhaps Haifa, and perhaps Gaza.

Hani Alqam (b. 1977) lives and works in Amman. He works in places around Amman, both anonymous and well-known, taking them as the main subject of his artistic production.

Jehad Al Ameri (b. 1977) lives and works in Amman. Al Ameri is currently the head of the Visual Arts department in the faculty of Fine Arts at the University of Jordan. 'I have been working for a long time on the relationship between poetry – meaning the literal text – and the visual image, and how their different characteristics merge, in order to produce a pure visual text out of the atmosphere of the written text.'

Mo'awia Bajis (b. 1989) lives and works in Amman. Bajis's work looks into ordinary, daily scenarios and details, and questions the hidden contradictions within them through multidisciplinary practices of video, sound and images and by relying on interactions with people to reveal new sociopolitical scenarios.

Raed Ibrahim (b. 1971) lives and works in Amman. Ibrahim's work aims to provoke the viewer, by making them think or laugh. This combination succeeds very acutely in shedding light and generating debate on taboo subjects.

Saba Innab (b.1980) is a Palestinian architect, urban researcher, and artist practising out of Amman and Beirut. Her work on the reconstruction of the Nahr el bared Palestinian refugee camp has influenced her constant rethinking of architecture, and her concern with dwelling-in-temporariness. 'Through painting, mapping, sculpture and design, I try to explore the suspended states between temporariness and permanence and the variable notions of dwelling, building and language in architecture.'

Adnan Yahya (b. 1960) lives and works in Amman.'By combining a number of visual forms throughout the years, all fused in one human crucible, I have sought to represent the anxiety of humankind. We see human beings with their perennial visions unchanged, with the same age-old questions and the same old corrupt, despotic and powerful faces, the power of men to destroy each other's freedom.'

Mohammad Shaqdih (b. 1976) is an artist, printmaker and graphic designer who lives and works in Amman, where he is Assistant Director and Outreach Officer at Darat al Funun. His artist's book The Snake was included in the 3rd International Artist's Books Biennale in Alexandria in 2008. He was awarded the 2012-13 Cultural Heritage Fellowship for Museums and Community Engagement at University College London.